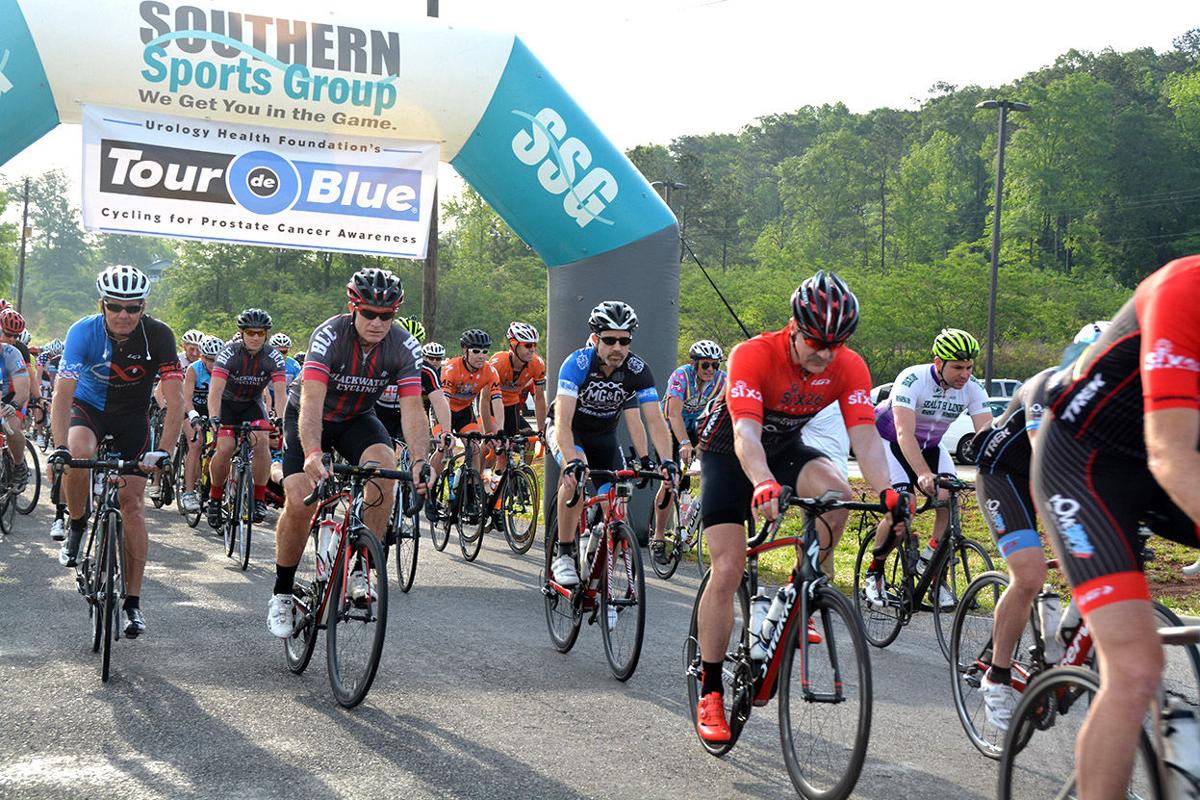 Pictured are a few of the cyclists who participated in the Tour de Blue last year. This year’s event will be April 29 at 8 a.m. starting at Moody High School.

Pictured are a few of the cyclists who participated in the Tour de Blue last year. This year’s event will be April 29 at 8 a.m. starting at Moody High School.

MOODY -- It’s the 10th anniversary of the Tour de Blue, and it will take place Saturday, April 29, starting at 8 a.m. at Moody High School. Onsite registration for the event will open at 6:30.

The Tour de Blue was started a decade ago by Sherry Wilson and Dr. Brian Christine of Urology Centers of Alabama.

“Now, after 10 years, Alabama has dropped to sixth in the nation instead of third. So we have made a positive impact as the death rate has gone down in 10 years.”

Moody said the second reason for the ride is to raise funds for the Urology Health Foundation, www.UrologyHealthFoundation.org, a nonprofit organization that provides free prostate cancer screenings across Alabama, especially in underserved areas at highest risk.

Early on, the Tour de Blue was primarily a local Birmingham cycling event that started out from the parking lot of Birmingham Bicycle Company. It has since grown to a much larger event, which prompted the move to Moody.

For several years now, the Tour de Blue has been part of the Alabama Backroads Century Series, a group of top century rides in the state that seeks to encourage participation in each of the rides and the charities they support. This year, the Tour de Blue will be the third century in the Series.

Sherry Wilson with the Urology Health Foundation said her organization wanted to reach out to the cycling community to solicit its help and support in the fight against prostate cancer.

In addition to supporting a great cause, the Tour de Blue offers cyclists a wonderfully scenic riding experience as it winds through the countryside of St. Clair and nearby counties.

John Halsey, who has many of these type rides under his belt, has called it “one of the most scenic centuries I’ve ridden.” Dan “Dirtdog” Watson, creator of Dirtdog's Birmingham Cycling Google Group, has said, “There’s not a better ride in town.”

On the century route, riders will be in for a real treat. After ascending Blount Mountain and passing McClendon Gap, they will enjoy a magnificent view of nearby mountains and the valley below while cycling along a 12-mile stretch of ridge top.

Heading farther, they will circle around Chandler Mountain, an unusual mesa-like formation of pre-Cambrian origins that is renowned for the Horse Pens 40 nature park on top. The longer rides then wind through the historic town of Ashville, home to the John Looney House. Built around 1820, the Looney House is a rare example of pioneer architecture in Alabama.

Brian Toone, one of Alabama’s most accomplished cyclists, will be joining the Tour de Blue this year. Besides coming from all corners from Alabama, cyclists from Tennessee, Georgia, Florida and Mississippi will be participating.

There is also a gentleman coming from Erie, Pennsylvania, to do the ride. He retired 2 1/2 years ago, has gotten back into biking and is on a quest to ride 100 miles in each state. Alabama will be No. 14 for him so far, and he selected the Tour de Blue for that personal goal.

Blue Cross and Blue Shield of Alabama is the event’s gold sponsor and will be sending volunteers to staff a rest stop in Springville. Chick-fil-A Leeds will be providing breakfast items to the participants, and Jim 'N Nick's will be providing a post-ride meal. There will also be chocolate milk from Barber's and ice cream bars from Blue Bell.