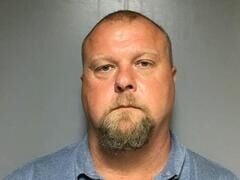 PELL CITY — A Pell City man has been arrested after he was indicted for sex abuse charges.

Ronnie Brasher, 47, of Pell City was arrested Tuesday in connection with charges of sex abuse for a child under the age of 12.

Sheriff Billy Murray said his office arrested Brasher on behalf of the Alabama Law Enforcement Agency after he was indicted by a grand jury for the charges.

The sheriff said Brasher is a former deputy for the county, but resigned from that position in August 2020.