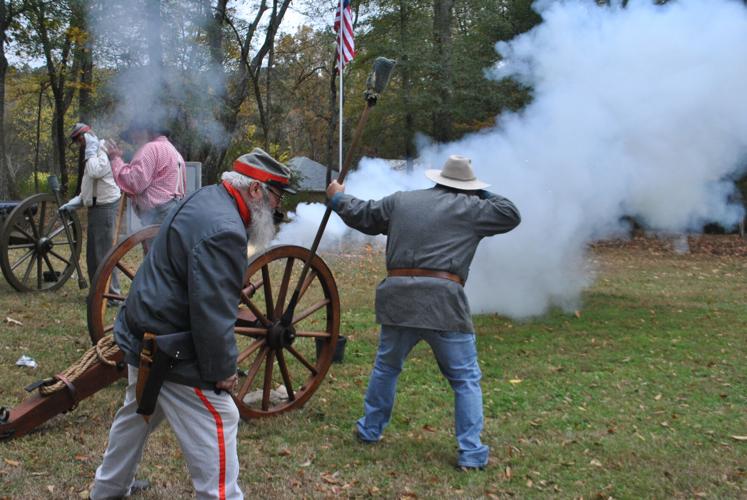 Camp 308 had two authentic cannons in place for the occasion, both fired in demonstrations for the crowd. A loud “fire in the hole!” preceded each firing as a warning. 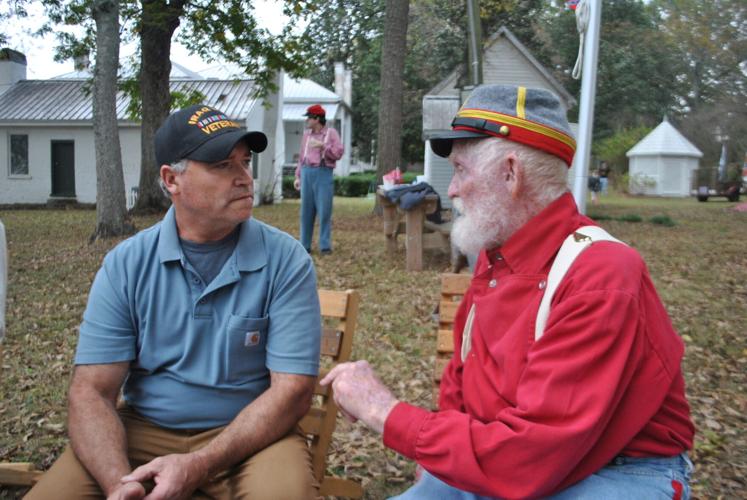 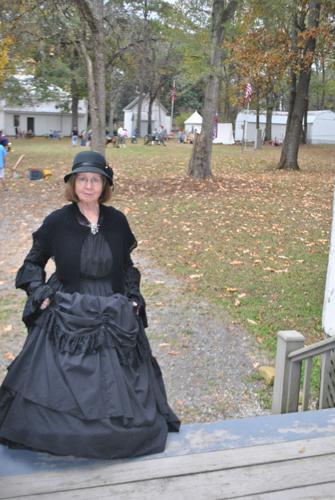 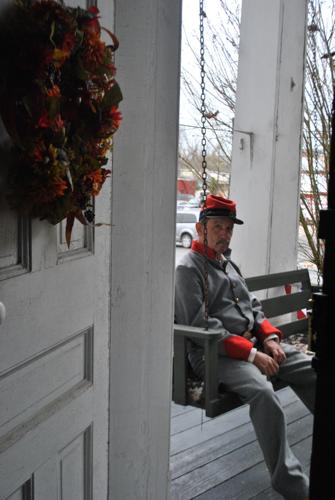 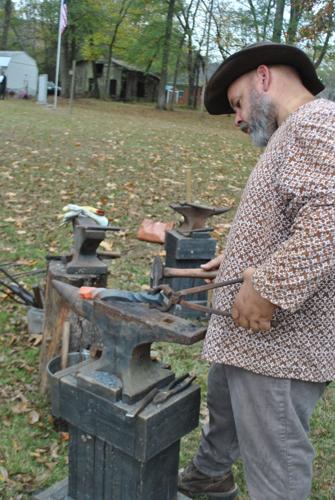 Metals used to create home and barn hinges, tools, cookware and much more has to be red hot from the forge for forming it. 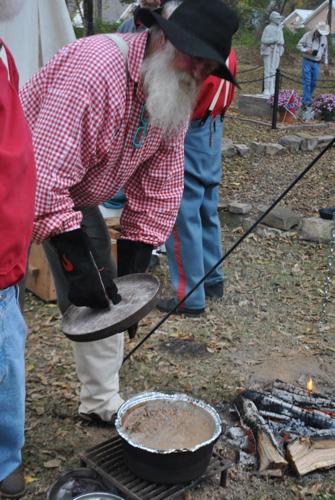 Danny Self had his kettle of steaming ham and beans ready for any who wanted a taste. 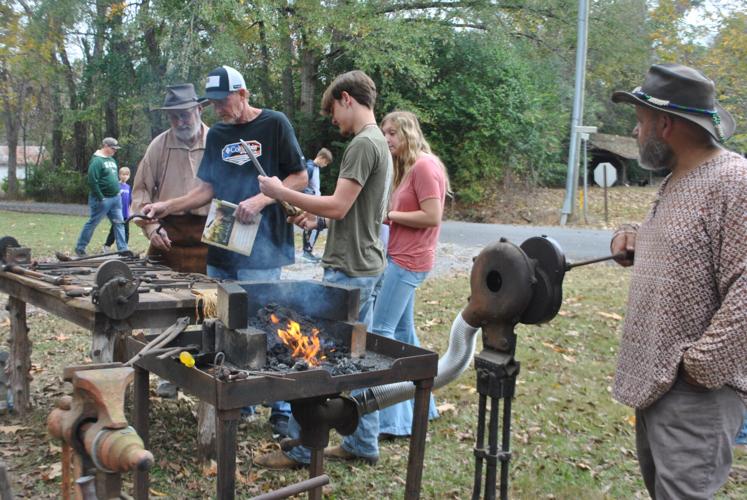 Greg Baker demonstrates the way blacksmiths worked during the early days of Ashville’s history for the Living History exhibit.

Camp 308 had two authentic cannons in place for the occasion, both fired in demonstrations for the crowd. A loud “fire in the hole!” preceded each firing as a warning.

Metals used to create home and barn hinges, tools, cookware and much more has to be red hot from the forge for forming it.

Danny Self had his kettle of steaming ham and beans ready for any who wanted a taste.

Greg Baker demonstrates the way blacksmiths worked during the early days of Ashville’s history for the Living History exhibit.

Red hot metal straight from the fire was hammered and coaxed into usable and necessary things that made living in past centuries more possible.

Things like hinges to hold doors on homes and barns, and tools required for building and fixing.

Learning the ways of “smithing” was one of the aspects of earlier times represented on the grounds of the John W. Inzer House & Museum as part of the city of Ashville’s 200th birthday Saturday, one of St. Clair County’s earliest settlements that became a city.

Two hundred years ago, blacksmithing hadn’t yet evolved into a specialty used mostly for keeping horses and mules able to offer transport and work in the fields.

It was a skilled trade for making anything in metal and making life easier.

He saw how hot the actual coal fired forge could get, when the pieces were ready for forming, and what it took to get the everyday things people needed to survive.

His father, Wade Cook, reminded his son there wasn’t a Home Depot or a Walmart to be had, just by driving over the mountain from Ashville to Pell City.

And Price pointed out that the forge and methods he used were designed for the 1840s, or even before, and that the methods still worked and produced products like hinges and doorknobs, pieces for clothing and cooking.

All from the hands of the “smith” and his forge.

Displays of the skills and crafts of the people of this time were in place for the city’s Living History element of the celebration, one that taught and reminded visitors of the place Ashville has in the making of the region.

Set up among the grounds of the 1852 home known as The John Washington Inzer House and Museum and the Masonic Lodge standing right behind it, the demonstrations brought in history fans of all ages and talents.

It was members of Camp 308 of the Sons of Confederate Veterans who hosted the Living History exhibits, the group has had the Inzer home in its care since it was deeded to them by family members in 1987 for historic and educational purposes.

The group hosts requested visits of the home and grounds, with members of Camp 308 and other groups providing tours and information.

The house is just across the street from the St. Clair County Courthouse in Ashville, one of two courthouses in the county, but the one with claims of being the original seat for county business and county court proceedings since the county formed in 1818.

It was on the Inzer House grounds, too, where Danny Self stirred his cast iron kettle of beans and pork over an open fire, set over coals underneath a tripod of stout branches to hold the makeshift stove.

Self dipped up tastes of the simmering dish for anyone wanting a bowl, its distinctive flavor filling the air to invite lots of interest.

Eighty-eight-year-old William Watkins is commander for Camp 308, and that’s where he kept watch of the activities taking place for part of the day.

His seat by the fire brought lots of visitors and friends, he’s also the president for the city’s official museum and the restored Masonic Lodge that was also open that day.

“You know, that lodge has been moved three times since it was built,” Watkins told a group who stopped by. “The first time it was moved to build a jail, and the second time, moved by ox cart to the center of town.”

When the lodge was moved for the third time to its current spot, it’s said that a young boy from the town rode along inside, Watkins said.

Watkins keeps a jolly demeanor telling stories of the town, and his humor holds high telling why he holds so many historic posts in the city he calls home.

“They just won’t let me quit,” he explains, reaching over for a taste of the hearty stew that’s bubbling nearby.

Tents and other trappings of the times of Ashville’s early years were also in place, showing how the soldiers and travelers found cover in their day and what it took to survive when shelter could be scarce.

There was flute and drum music of the day played live, offered by the trio that calls themselves “Three Rivers Fife and Drum,” with Ashville resident Jo Ella Hood and Ashville’s United Daughters of the Confederacy member and Springville resident on their fifes, and member Dale Lamb on the drum.

Another popular display were two vintage cannons the SCV have in their fold, both in working order and members manning their blasts made with due warnings throughout the day.

Each charge was announced by a loud “fire in the hole” bellowed by those manning the two-wheeled crafts, followed by a brief burst of smoke and an occasional clap from the crowd.

Inside the Inzer House itself, tour guides gave details of the lives that once made the house their home, telling of the late local judge, two-time senator and Confederate Army Lt. Colonel’s place in the town’s history.

The home is furnished with many pieces from the Inzer family’s personal collection, and framed artwork and historic documents are hung for display.

Ashville residents and officials prepared for the week of bicentennial activities over the past year, showcasing all kinds of interests and entertainment to note the occasion.

Watkins said he hopes the work of the historic groups and its townspeople help teach the tales of the past, the settlers’ ways and recollections and the things that they did.

“It’s all done for the teaching, the way this town came to give us what we have today, and the way these places can serve us now and in the years to come,” he said.