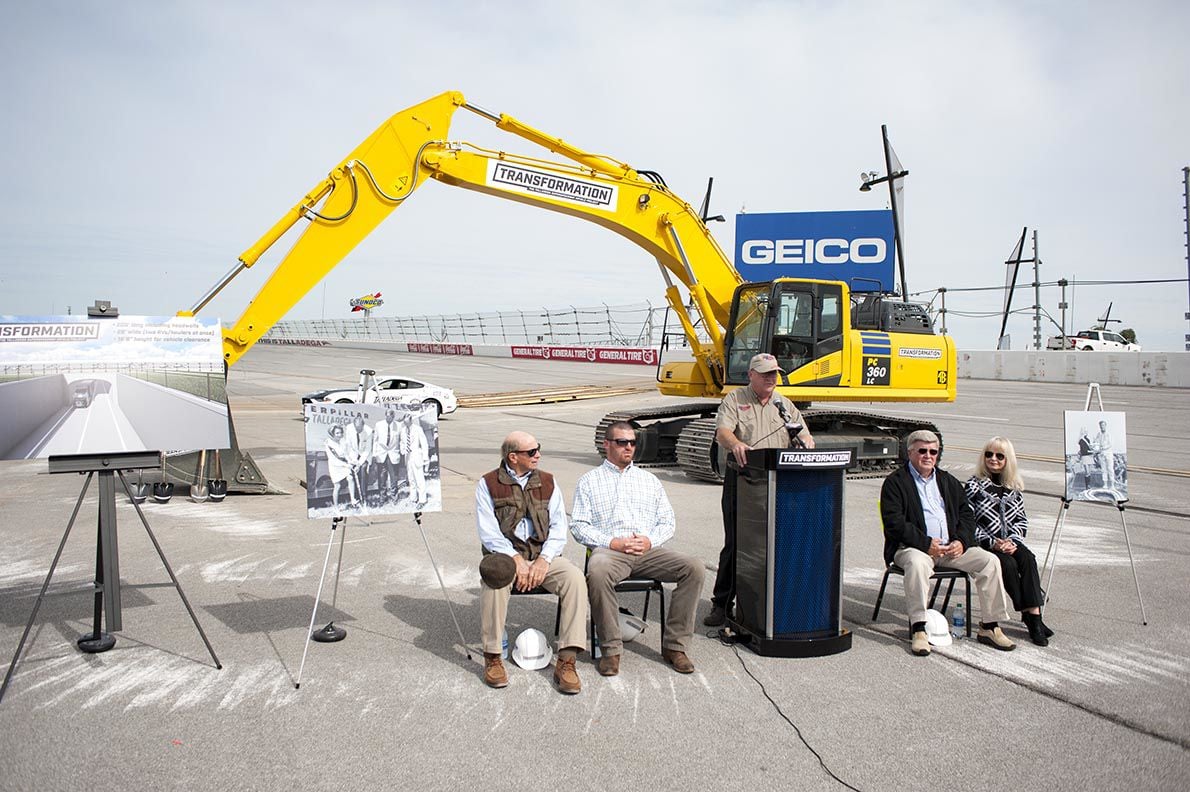 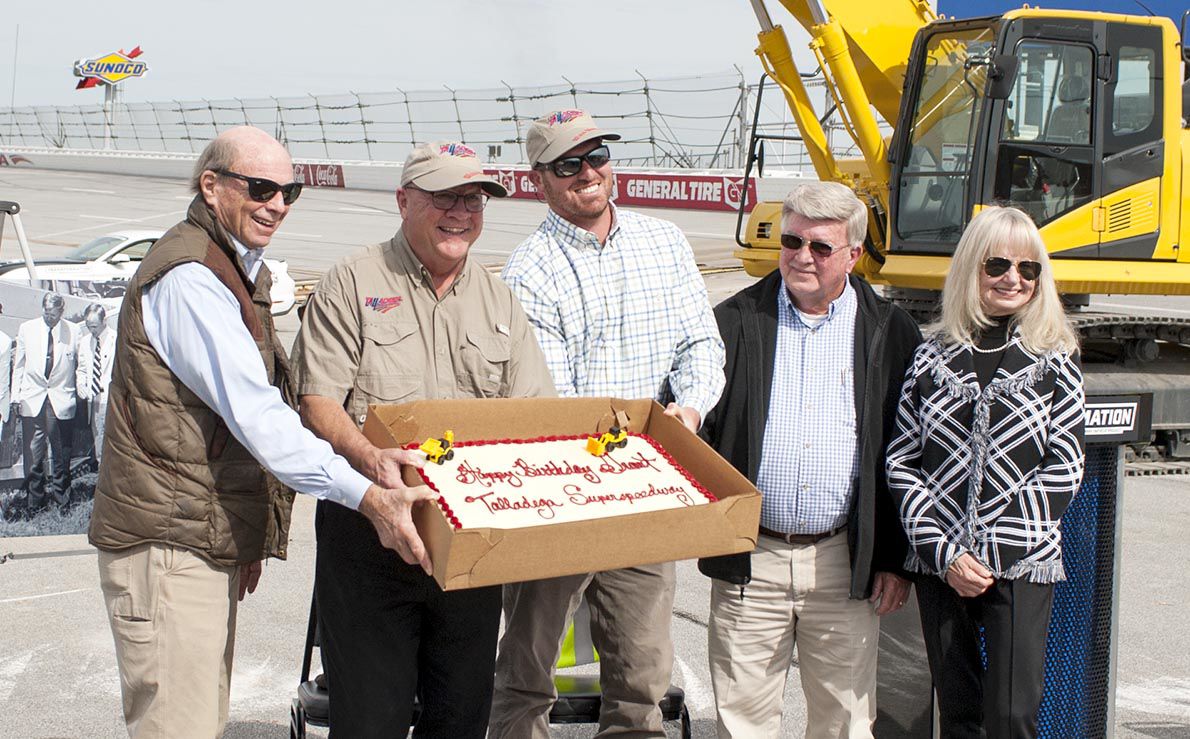 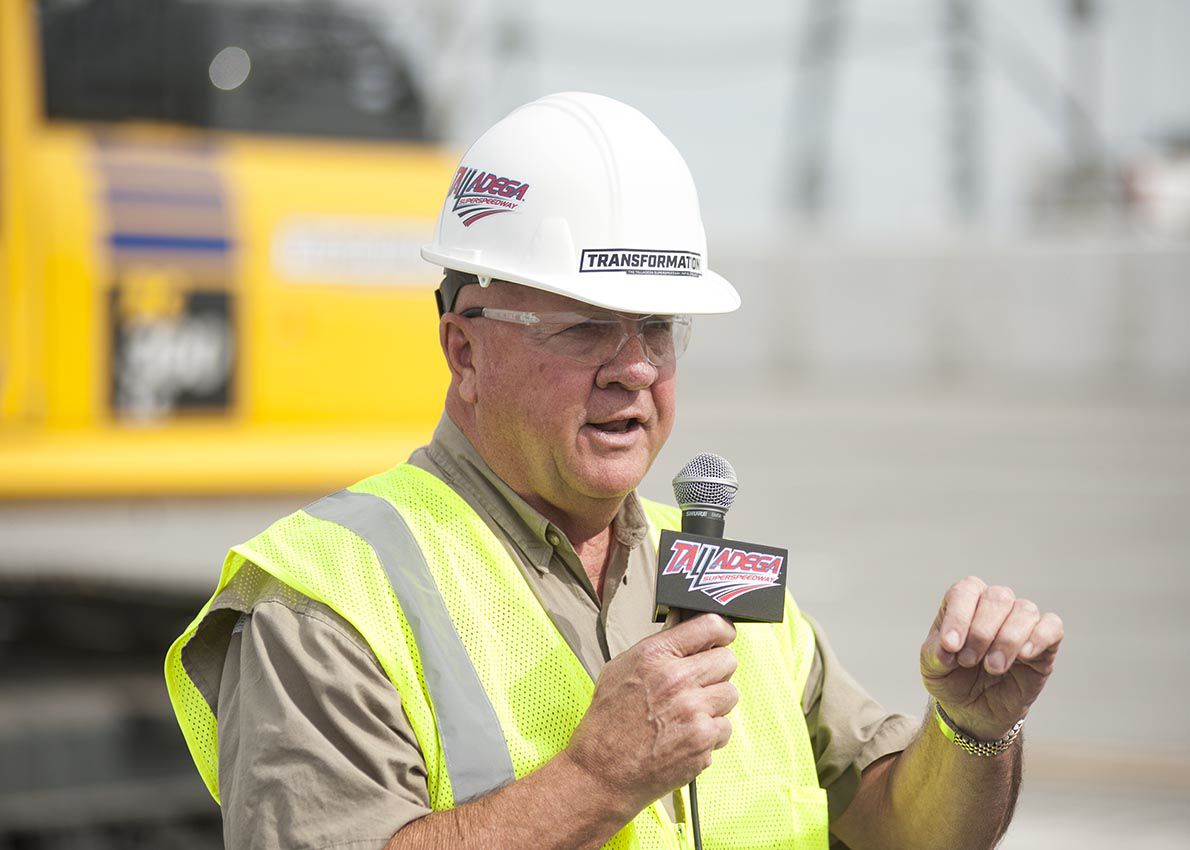 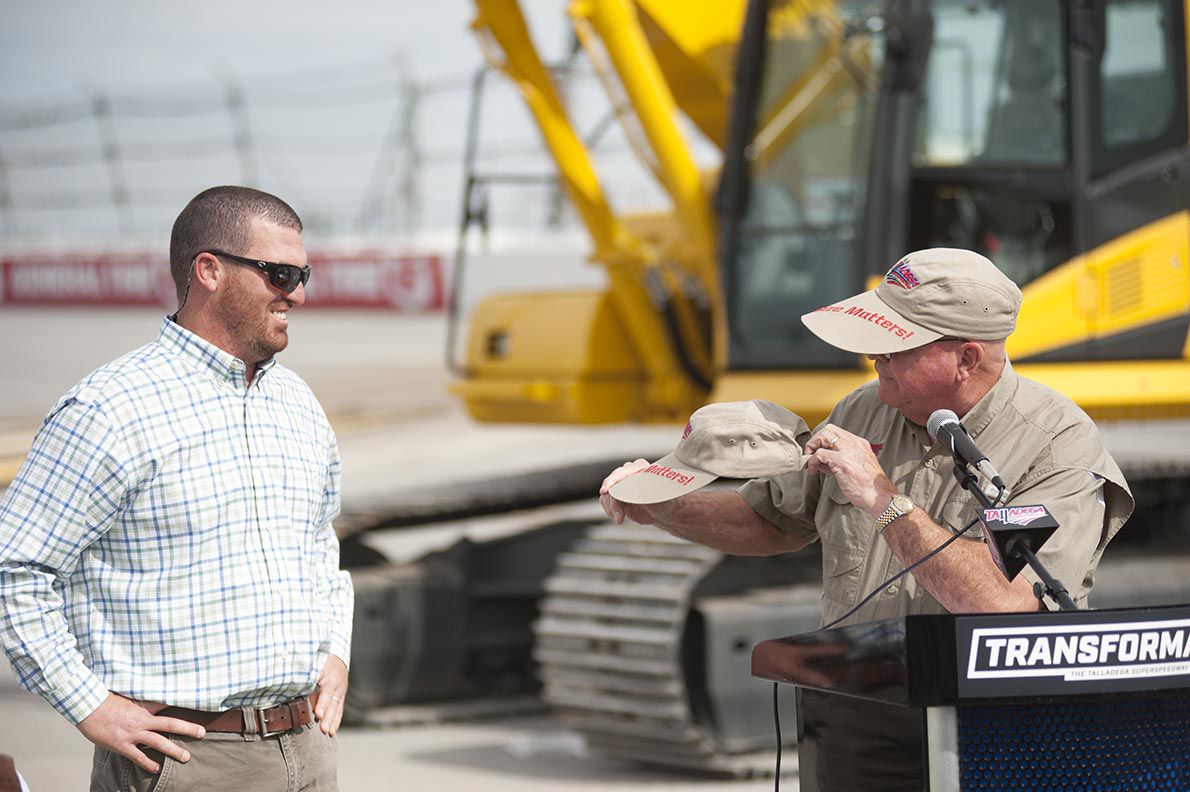 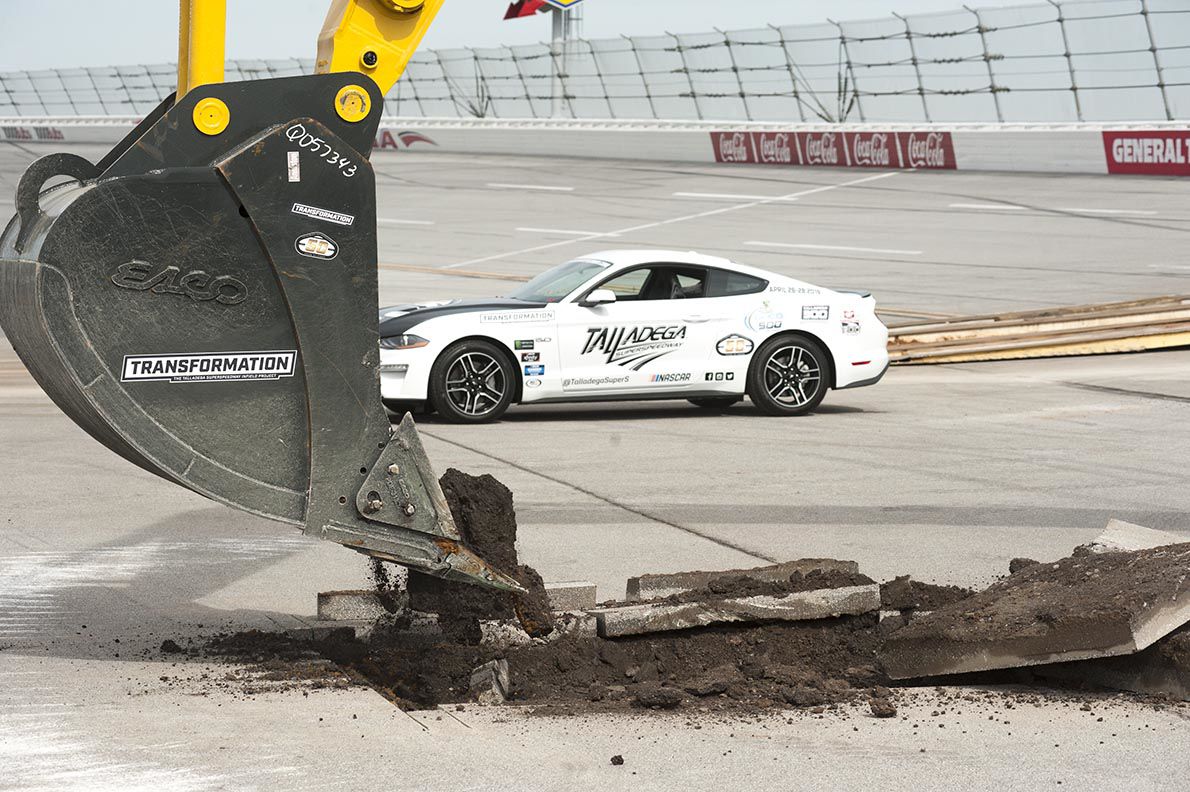 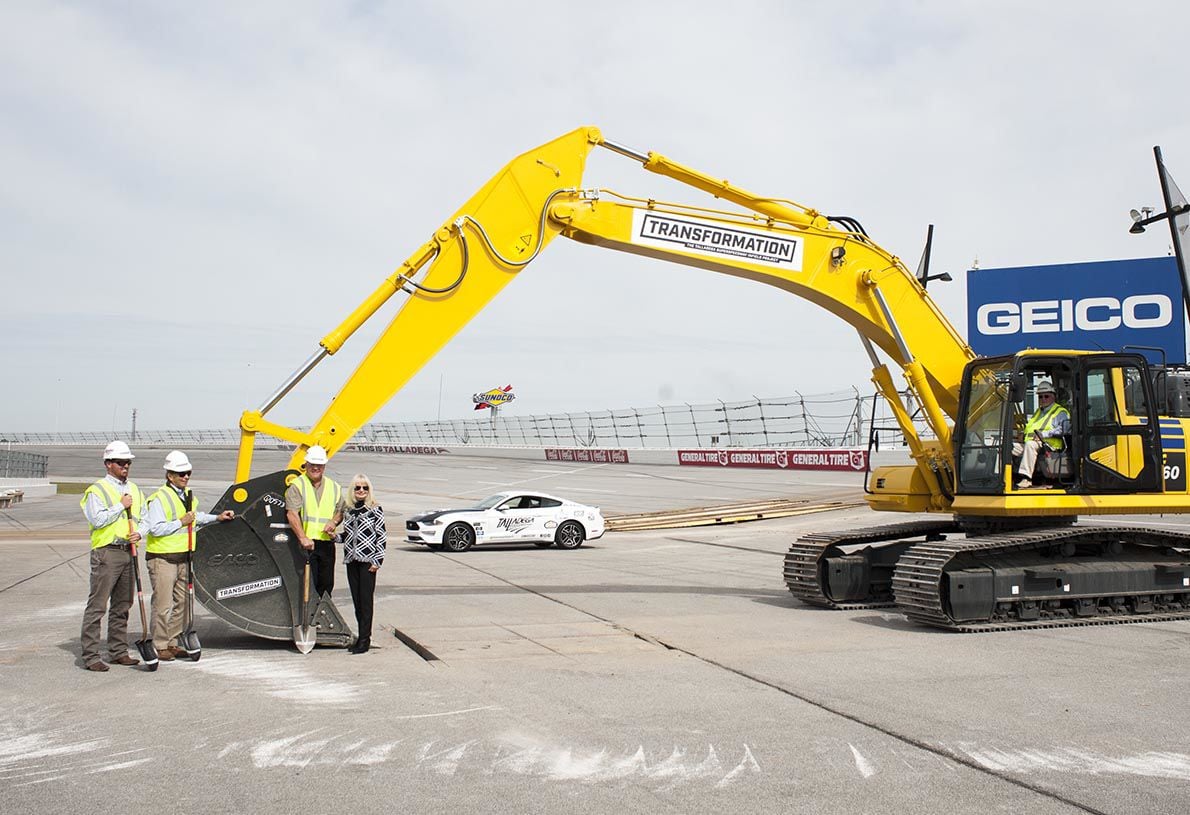 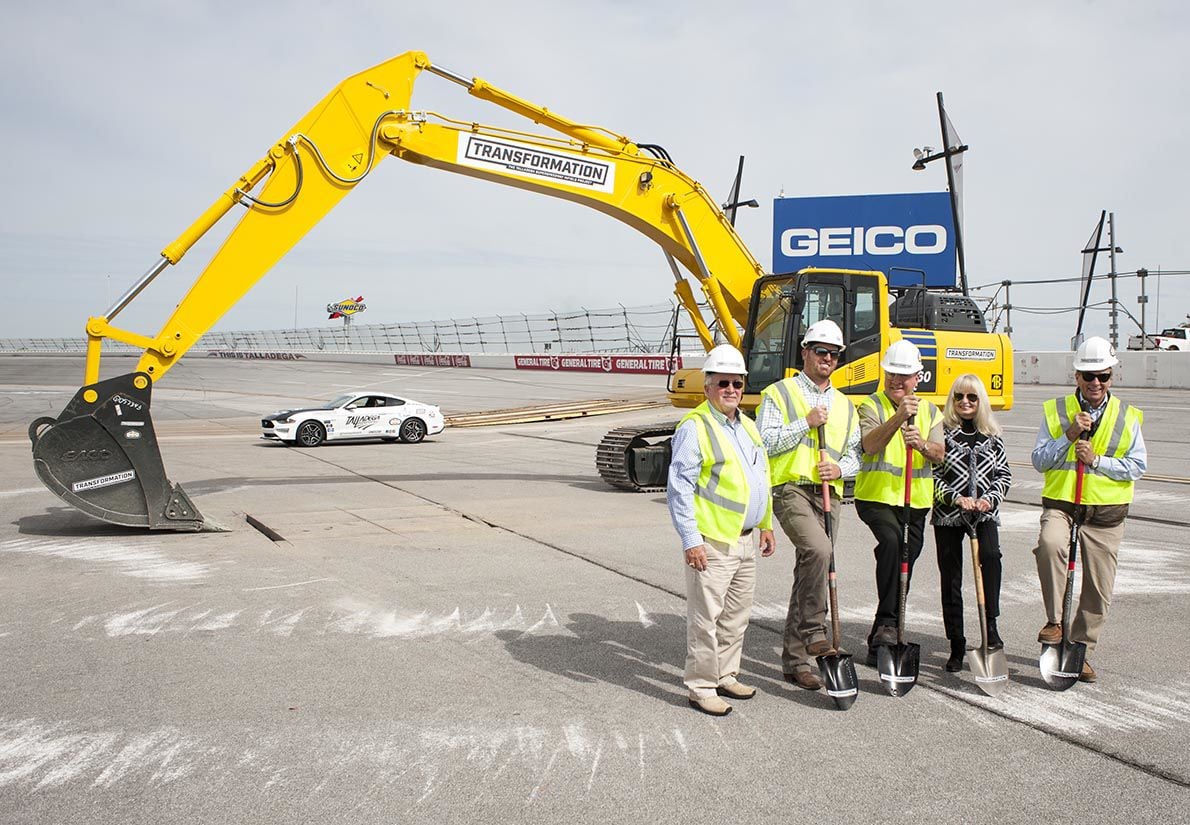 “My oldest daughter was born on my birthday, so that will always be the biggest gift I ever got,” he explained. “But today, (Owners Superintendent of International Speedway Corporation’s Design and Development team) Mike McWilliams helped me open up the next biggest.”

Lynch was referring to Tuesday morning’s groundbreaking ceremony for the track’s new Turn 3 oversized vehicle tunnel, the first phase of “Transformation -- The Talladega Speedway Infield Project.” The $50 million project, which was first announced in July, includes a “one-of-a-kind Garage Fan Zone Experience, featuring up-close access, interactive attractions and enhanced amenities for fans, sponsors, teams and stakeholders in the iconic Talladega Infield,” according to a press release.

As Lynch put it during the ceremony, the Fan Zone “will allow our fans to party right in the epicenter of the sport.”

The work on the new tunnel will done by Taylor Corporation of Oxford. This first phase of construction should be completed in time for the spring race in 2019, and the whole project should be done by next fall, in time for the track’s 50th anniversary.

“We’re honored to be selected for the design-build-construction of the new oversized tunnel portion of the infield redevelopment project,” said Ellis H. Bennett, project manager for Taylor Corporation. “It is great to be associated with a venue that has as much tradition and pageantry as Talladega Superspeedway.”

Said Lynch, “As we were going through and working with various companies, we thought it was very important that local people continue to be involved, especially with the bigger projects. That’s been working well for us.”

According to the press release, the new two-lane tunnel will be big enough to allow two RVs or race team car haulers through at the same time. It will be 16 feet, 8 inches tall, 28 feet wide and 208 feet long and will be open 24 hours per day during race weekends.

The two main entrance tunnels and the Gate 9 crossover will still be available but will not be used as much.

“If someone with an RV or a tractor trailer gets here after Gate 9 is closed, they will have to wait all night to get in and start setting up their campsite. (Once the new tunnel) is complete, they will be able to come in anytime,” Lynch said.

During the culmination of Tuesday’s ceremony, Lynch waved a green flag, signaling McWilliams to dig up part of the concrete near the end of the new tunnel with an excavator.

Both Lynch and McWilliams have worked at the track for more than 25 years. Two of Tuesday’s guests have an even longer history with the track, however.

Dell Hill was present for the original groundbreaking in 1968, and the grandstands at the track are named for his father, O.V. Hill.

“It’s hard to think back to that first groundbreaking,” Hill said. “Back then, it was a new idea, not what it is today. There was a lot of hype, a lot of talk about what the crowds would be like, what the employment opportunities would be.

“Tickets were $15 or $20, and we had high-school style bleachers set up. We’ve seen everything explode since then. We’re just as excited now as we were back then, but it’s different. There’s less hype now.”

Lana Osborne, crowned the first Miss Talladega in September 1969, was also present for the ceremony.

Several public officials from the area were also on hand Tuesday.

“This is a great thing for our county and our area, and we appreciate the commitment to using a local contractor. Staying with a fairly local company means an awful lot,” he said.

“This is a really fantastic thing for Talladega County,” he said. “Expansion means more people and more events here, and that expands our revenue base. More people coming here means more traffic for our motels, restaurants and everything else.

“NASCAR and the International Speedway Corporation are continuing to grow because they are listening and engaging with race fans to bring more participation. They have to be versatile and they are.”