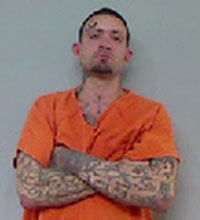 TALLADEGA -- A Talladega man is being held on a $100,000 bond after being charged with manslaughter last week.

Jon Patrick Duke Jr., 32, was served with the manslaughter warrant Jan. 2, according to Talladega County Metro Jail records. District Attorney Steve Giddens said Duke was already in jail for alleged non-payment of child support when he was served.

Giddens said Duke was involved in a two-vehicle wreck on Alabama 77 near the Coosa Valley Electric Cooperative on July 19 that killed Dominique Christina Stevenson, 26, of Talladega. Stevenson was pregnant at the time of the incident.

Giddens said the medical examiner’s report did not say how far along the pregnancy was, but Stevenson’s family told Talladega County Coroner Shaddix Murphy she was at about 29 weeks. According to her obituary, the child was going to be a boy. She planned to name him Kylan Blaise Dorman.

Duke was driving a Chevrolet Tahoe northbound when he drove through the median (which is 20 to 30 feet wide at that point), over a drainage ditch and into oncoming traffic on the other side of the highway, Giddens said. He struck the Hyundai Sonata that Stevenson was driving head-on.

Stevenson was pronounced dead at the scene, Murphy said at the time. Duke and a passenger in his vehicle were transported to the emergency room at Citizens Baptist Medical Center in Talladega. Giddens said Duke’s toxicology report showed benzodiazepines (a class of drug that includes Xanax and Klonopin) and methamphetamine in his system at the time of the wreck.

The wreck was investigated by the Alabama Law Enforcement Agency.

According to Talladega County Metro Jail records, Duke was arrested Sept. 30 on charges of failure to pay child support and was being held on a $3,500 cash bond when he was served with the manslaughter warrant. Giddens said Duke also has a previous conviction for burglary in the second degree and served time in that case.

Stevenson worshipped at Rest In the Lord Ministries with her uncle, Pastor George Adams. She graduated from Talladega High School, took classes at Central Alabama Community College and, at the time of her death, was working at Honda Manufacturing in the Road and Rail Services Inc. Division.

Manslaughter is a class B felony in Alabama, punishable upon conviction by two to 20 years in prison. Under Alabama’s habitual offender act, however, Duke is facing a sentence of 10 to 99 years in prison due to his prior conviction.