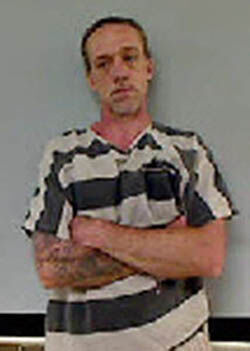 TALLADEGA -- A Talladega man has been arrested and charged with violating the Alabama Sex Offender Registration and Notification Act, according to Talladega police.

Steven Bruce Thrash, 41, was arrested Wednesday night, Sept. 9, on a two-count warrant charging him with failure to register and prohibited residence location. He was released Monday from the Talladega County Metro Jail on a $5,000 bond.

According to police Lt. Jimmy Thompson, Thrash’s warrants date back to 2017, when he was registered at a residence on Jackson Trace Circle. Thompson said a probation officer went to Thrash’s registered address in March 2017, didn’t find him and left a card stuck in the door.

A Talladega police investigator went to the trailer a few weeks later and had no more success finding anyone at home. The probation officer’s card was still stuck in the door.

Thompson said the investigator checked with the property owner, who said a female had been the only person living in the trailer for the last four to five months.

Thrash was arrested earlier this week in Oxford after attempting to register a residence in Calhoun County, Thompson said.

According to court records, Thrash was indicted in Calhoun County in 2013 for using a computer to solicit a minor in the summer of 2009. He pleaded guilty to that charge in September 2014 and was sentenced to 20 years in prison, split, with two years to serve and the balance of the sentence on probation.

Court records also indicate Thrash had more than 400 days jail credit when he was sentenced, so he would have served less than one year in prison. He had a lengthy history of convictions for various other crimes, including theft, burglary, robbery and receiving stolen property, but no other sex offenses. The exact date that he was released was not available.

SORNA violation is a class C felony in Alabama, punishable upon conviction by one year and one day to 10 years in prison.