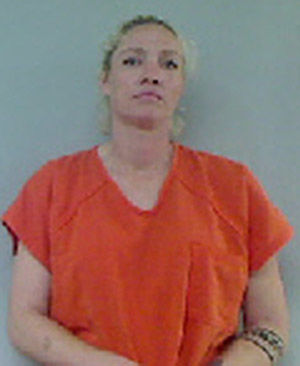 TALLADEGA COUNTY -- A Sylacauga woman is being held on a $40,000 bond after being arrested on a charge of robbery in the first degree Wednesday evening, according to Talladega County Chief Deputy Josh Tubbs.

April Renee Wood Lindsey, 38, has been charged in connection with an incident at her residence Feb. 5. Bond in the case was set by District Court Judge Jeb Fannin.

Tubbs said the victim in this case initially met Lindsey online, and she invited him to her home on Skyview Road. When he showed up, she invited him in and told him to sit on the sofa, then left the room.

At that point, according to the victim, a male entered the room, put a gun to his head and asked the victim why he had come to see his wife. He then hit the victim with the gun butt, first on the top of his head and then in the mouth, knocking out one of the victim’s teeth.

At this point, the victim told investigators, Lindsey came back into the room with a knife, cut him across his chest and took his money from him.

The victim initially reported the robbery and assault to Sylacauga police, who determined the crimes took place in the county’s jurisdiction.

Tubbs added Lindsey does not appear to be married, so the male suspect is not her husband.The male suspect had not been arrested as of Friday afternoon.

Robbery in the first degree is a class A felony in Alabama, punishable upon conviction by 20 to 99 years or life in prison.