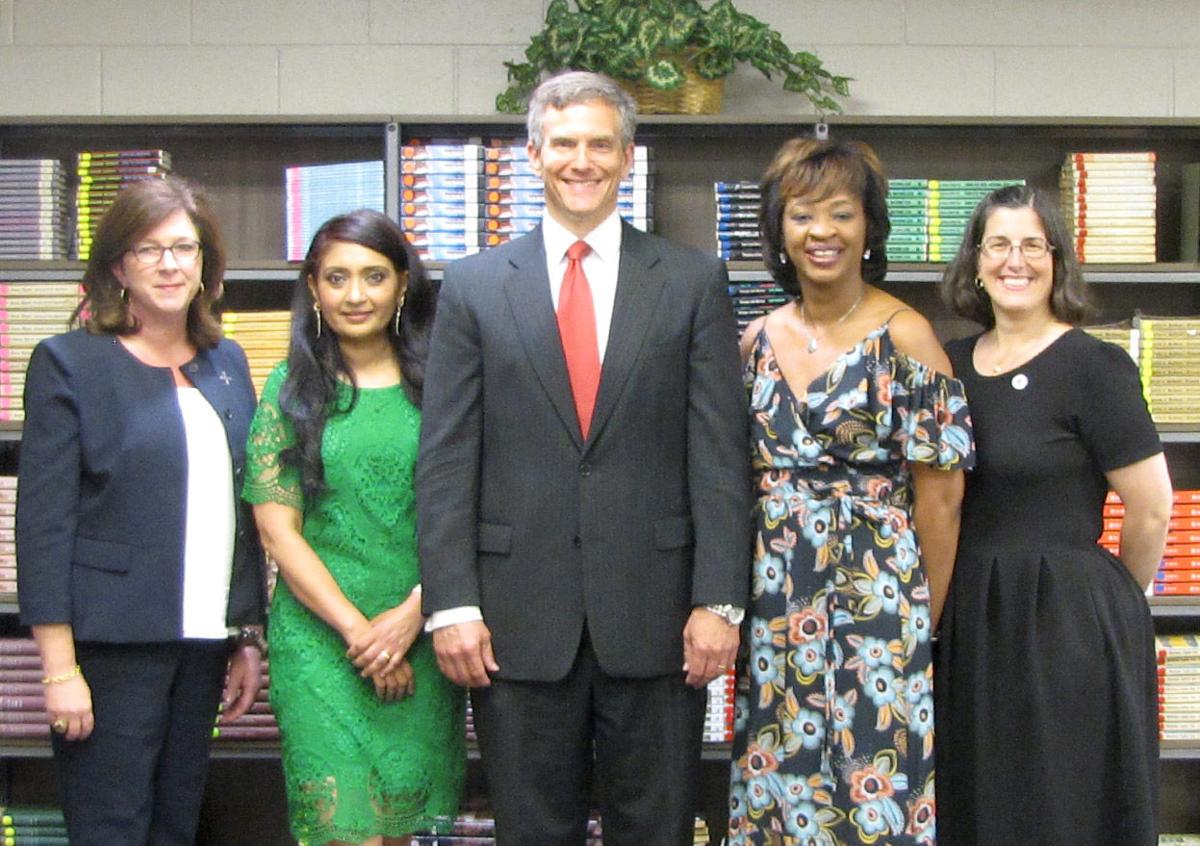 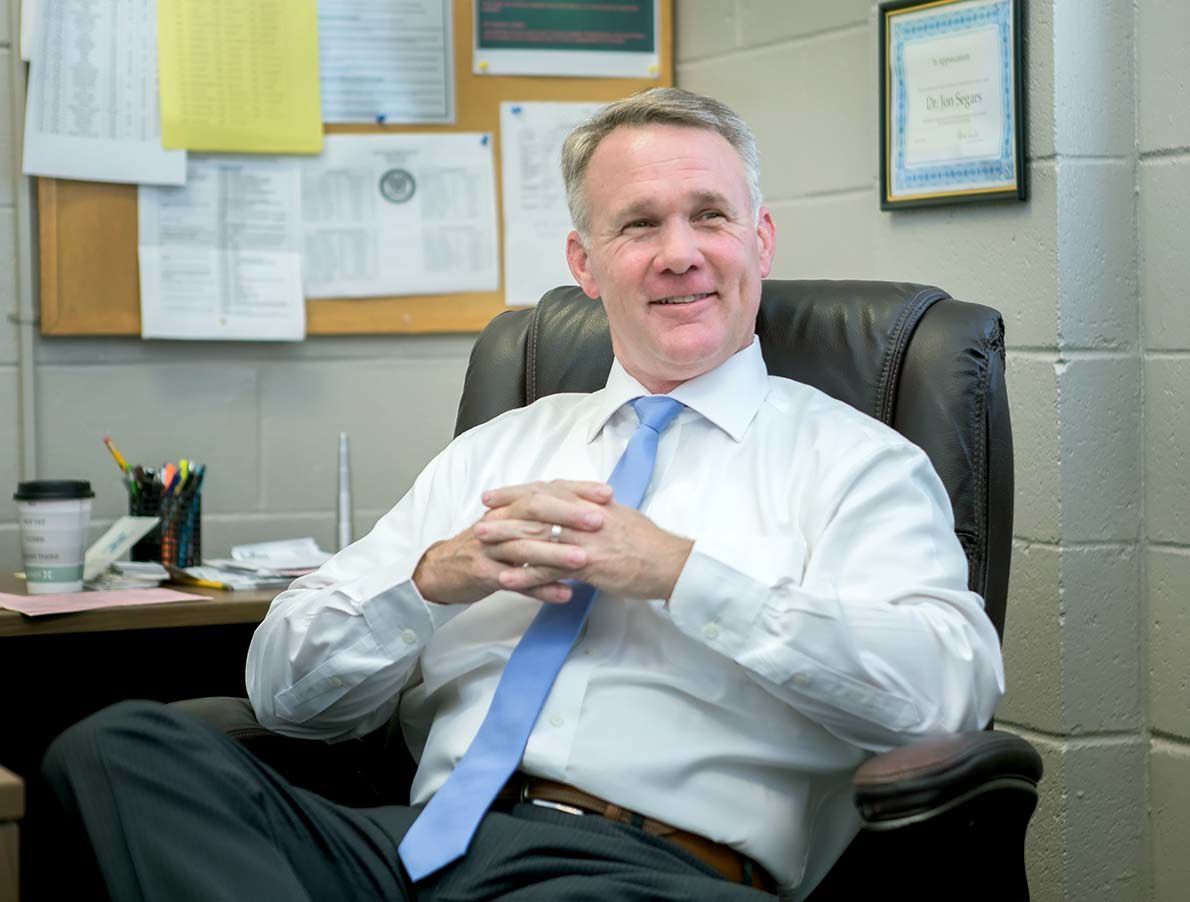 Dr. Jon Segars was selected the next superintendent of Sylacauga City Schools by a unanimous vote of the Board of Education in May 2018. Segars began his new job July 1, 2018.

Dr. Jon Segars was selected the next superintendent of Sylacauga City Schools by a unanimous vote of the Board of Education in May 2018. Segars began his new job July 1, 2018.

SYLACAUGA -- The Sylacauga Board of Education met Monday morning to deal with several pieces of old business, sparking some controversy.

The agenda for the called meeting included the system’s salary schedule and a few job descriptions, along with a few personnel matters.

The salary schedule saw only a few changes from the previous year, with a cut to the maintenance supervisor salary to bring it in line with the transportation supervisor position, the creation of a custodial coordinator salary, changes to summer literacy instructor pay scales and the adding of a literacy camp administrator and the elimination of a response to intervention (RTI) specialist in supplemental positions.

The salary schedule was a point of some contention.

Board member Dr. Steve Marlowe said he did not remember seeing the full document presented in a meeting prior to Monday morning. Superintendent Dr. Jon Segars disagreed, citing discussions of changes to the salary schedule in July as well as the document being presented in May.

Marlowe said he saw a few changes during the board's July meeting, but those were amendments to the 2019-20 salary schedule. He added this was a different document.

Segars said his recommendation in July mentioned the amendments would bring the schedule to what the 2020-2021 document would be.

Marlowe still wanted to be sure, so he asked Segars to check the minutes from the July 28 meeting to be certain.

Following a brief pause, Segars returned to say his review of the minutes showed the schedule was proposed in the way he said, but he admitted the way it was brought up could be confusing.

Marlowe said if the schedule had been presented, he stood corrected.

The salary schedule was then passed by the board.

The salary schedule issue also did not go over well with the board’s Alabama Education Association representative, Charmelle Lewis.

Lewis told Segars after the meeting she had not received a copy of all of the changes to the salary schedule, namely the removal of the RTI specialist supplemental position, prior to the meeting.

She said the change was also not discussed in a prior meeting, with Marlowe agreeing this was his first time seeing it. Segars said that change took place last week after a series of individual conversations with some members of the board on the subject.

There was some concern about these conversations not taking place publicly and possibly constituting a serial meeting. A serial meeting is defined as a non-public meeting where two or more voting members of a public board meet to discuss matters.

Because Segars is not a voting member of the board, his discussions do not necessarily constitute a serial meeting because he only had discussions with members individually.

Segars said he wasn’t instructed to remove the item, yet simply decided to not recommend putting an RTI specialist on the schedule

Lewis also said the removal of the specialist wasn't in the changes to the schedule she had previously received from the school system in July.

“My issue was the salary schedule I was given was not the one presented today,” Lewis said after her discussion with Segars.

Lewis said she feels this violates a 2009 law that requires school boards to consult with the local professional organization, such as the AEA, before they make changes to policies, rules or regulations that affect employees.

A 2019 memo from the Alabama Associations of School Boards provided by Lewis said this would include items like a salary schedule or even student code of conduct. This same memo stated the AEA representative should be given the ability to comment on these changes, but his/her consent is not needed prior to a change.

Segars said he felt the matter had been discussed at length over the last couple months and therefore should not have been news to anyone.

“This has been an ongoing discussion since April or May, so it has all been discussed,” Segars said, adding Lewis may have not gotten those changes in the format she wanted, but he would be checking the meeting minutes to be sure it was discussed.

Segars said the biggest change is taking custodial matters out of the job description for the maintenance supervisor and adding a need for weekly updates on work orders.

Segars said the custodial duties in the job description for the maintenance supervisor will be removed. Those duties will be part of a new job description, for a custodial coordinator, a position likely to go to a custodian already on the school system’s staff.

Marlowe also expressed some issues with these changes.

He said that he disliked the idea of cutting the maintenance supervisor's pay to make it the same as the transportation supervisor.

“Essentially, you are talking about a $10,000 cut in pay for that person who’s doing that job,” Marlowe said, “I don’t feel good about it”

Segars said there is no person in that position because the former maintenance supervisor retired.

Marlowe also said he disliked the move because he felt it was unfair to the person filling in while the position is unfilled.

Board Member Melissa Garris said she was satisfied with the changes.

“I think we do job descriptions not based on who could potentially be in that job but looking forward,” she said. “Because of that, I am very comfortable with these.”

Marlowe said he simply felt having people work their way to a position just to have the pay cut before they possibly get it was bad for morale.

The motion was approved with a vote of three to one, with Marlowe opposing due to his stated issues. Board member Dr. Rekha Chadalawada was absent.

Marlowe also asked that the custodial coordinator job description have an item added clarifying that the coordinator is also to take part in custodial duties, which Segars fully agreed with. The item was tabled pending that change.

Marlowe asked if the custodial coordinator position needed to be removed from the salary schedule due to it not having passed at this time. Segars said that it needed to stay in the schedule because the schedule is part of the budget and must be submitted Tuesday. He said that if the position is not approved, he would likely recommend its removal from the schedule in an amendment.

Lewis also expressed concern with this move, saying she was unsure how a position could have a salary but no job description.

She also said she had an issue with the fact that one item could be tabled for a change while the salary schedule could not.

In other matters, the board: