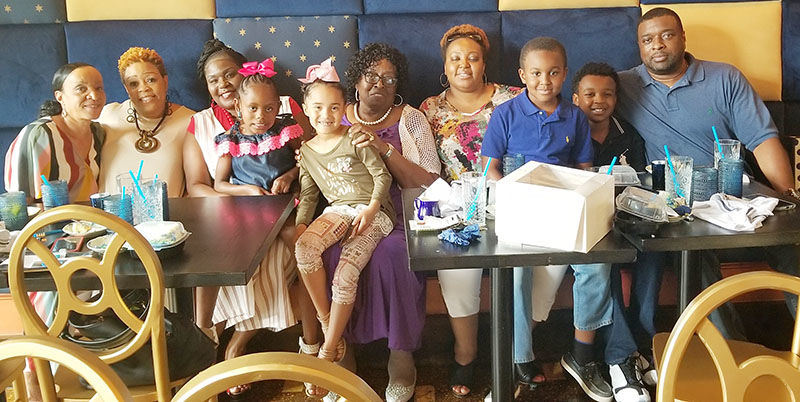 Monday, Aug. 5, was my birthday, and I was so excited.

I volunteer in the library on the first Sunday of each month. Tracey Dussett is our supervisor, and she gave me my Sunday morning hug and a beautiful card. Her husband came in earlier and wished me "Happy Birthday!"

After service, I thought I was going to celebrate with brunch at Preservery. I knew my son, his wife and their two sons were to attend. But, to my surprise, my sister (Teresa Swain from Nashville, Tennessee) and play-sisters (Janice Garrett and Val Burwell from Huntsville) and nieces (Kamora Hurst from Nashville and Jada Garrett from Huntsville) were also present.

After loads of laughs, hugs and opening cards and gifts, our meal arrived.

I ordered my favorite, grits and shrimp. The grits had a lavender-grayish hue, and they were the best tasting grits I've ever had.

The shrimp were plump and juicy.

And the green and red miniature tomatoes and pickled okra completed the tasty and colorful dish.

My grandsons ordered waffles and chicken. I don't know if they were more excited over the minature pitcher of syrup that came with each of their orders or the gathering and atmosphere.

The newly opened restaurant is in Five Points South in Birmingham, next to Frank Stitt's and Highland Bar and Grill.

The Preservery offers an elevation of soul food to be enjoyed while listening to live music in a calm and relaxing environment.

Dre Foster, owner and chef, greeted us and gave us a brief history of the establishment. The business was established in 2016 and was originally at Pizitz's.

Preservery has been at its current location a little more than two weeks.

According to the chef, "Preservery offers its customers soul food that they've already had."

But, from my experience, not to that level!

I also celebrated my birthday on my actual birth date, Aug. 5, with friends and former co-workers, Gladdean Castleberry and Phyllis Shields.

Gladdean called me a couple of days later and explained that she really enjoyed my birthday.

You know you are extra blessed when others take time out of their busy schedule to help make your day special and end up enjoying your celebration as much as you do!

Thanks all, love you

It appears as if meaness/violence is on the rise.

But we do hear of others that are trying to make a difference.

In New York City, a peer team has developed bright orange friendship benches. The concept of the benches originated in Zimbabwe.

The purpose of the benches is to let people know pain is not imagined and that others care.

The peer team is made up of people who are not trained/certified counselors or doctors. But the peer team cares and and is happy to be there to listen and give people someone to talk to.

So many just need someone (positive) to talk to.

A lady purchased the entire stock of leftover shoes from a store that was going out of business.

Her daughter had previously asked her for one pair for a classmate. But the request turned into an idea and a good deed for 1,500 other students.

Neighbors joined the mother and daughter and gave out school supplies. Professionals joined in, too, and gave free dental checkups, eye exams and haircuts.

A 6-year-old boy asked his mother for a T-shirt for the first day of school. The shirt read, "You Have a Friend!"

Well-wishers heard of the young boy's idea and donated funds for the boy's entire class to receive the T-shirt.

Why are so many people content with being evil?

We must obey the Word and be there for each other!

-- Maxine Beck writes about the African-American Community in and around Talladega.