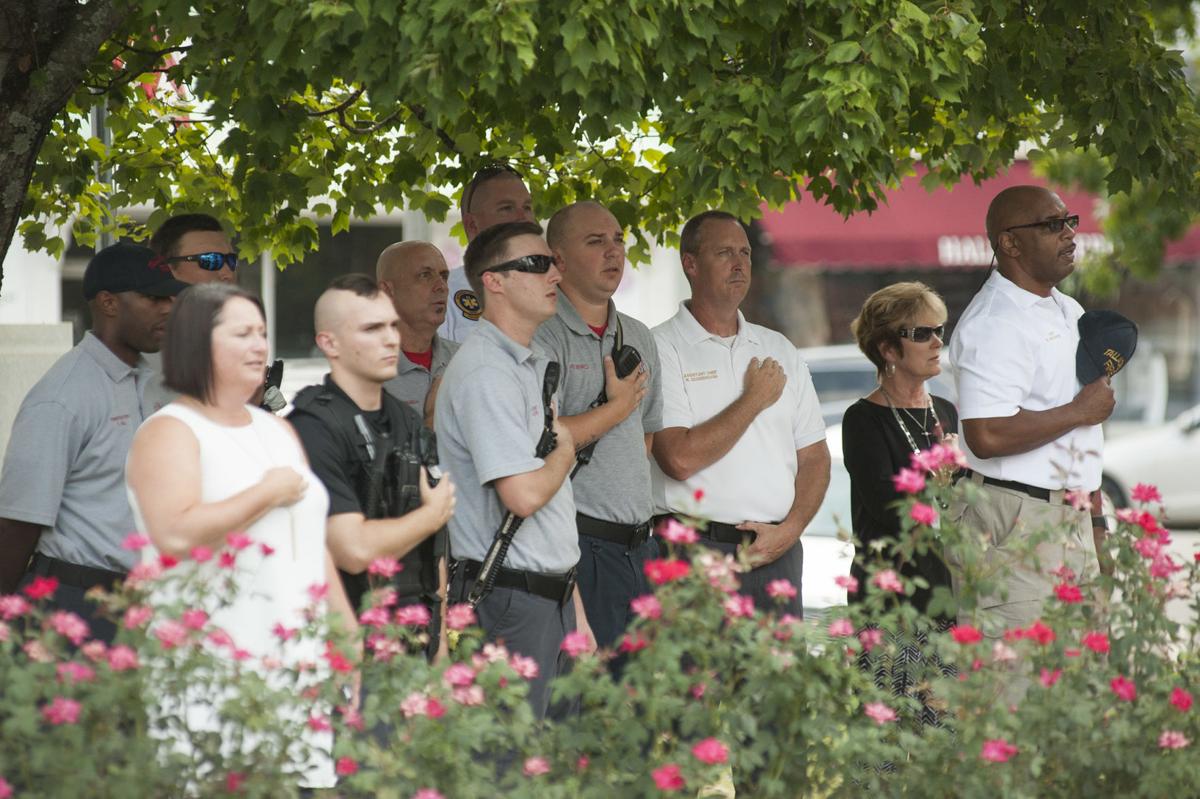 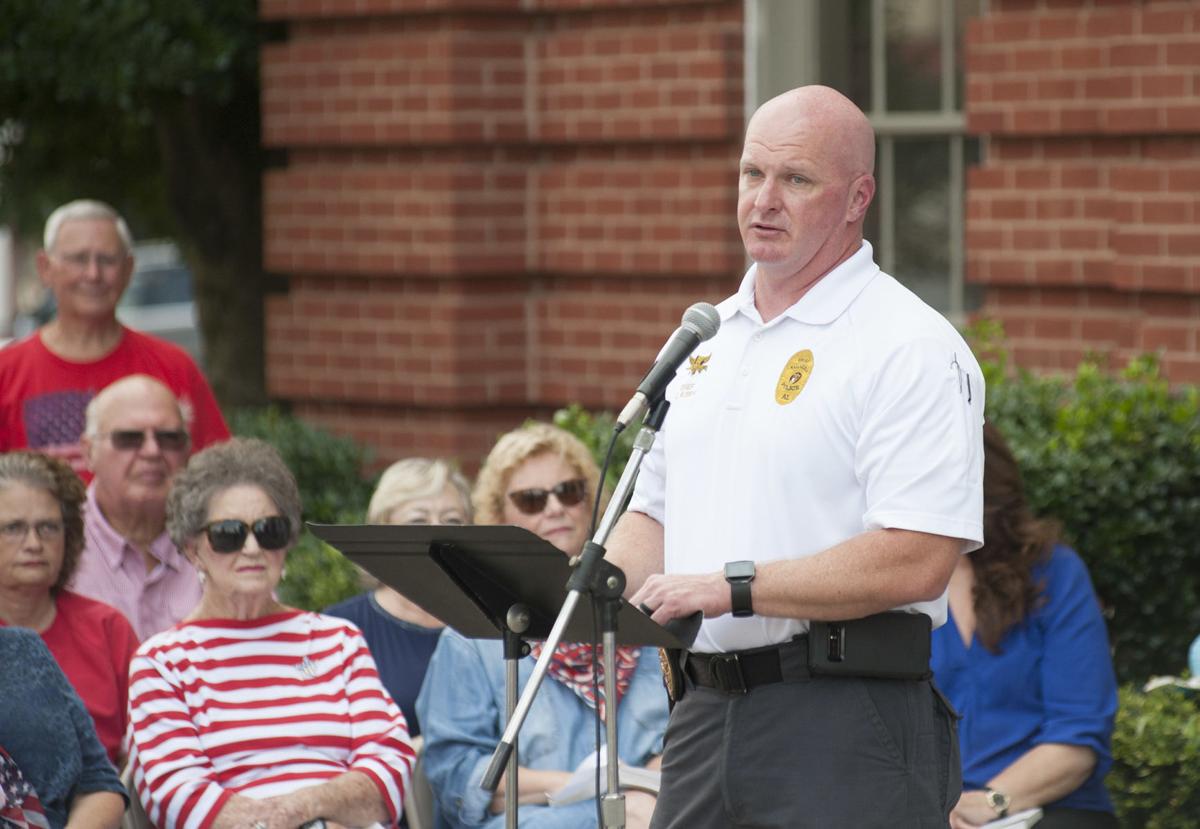 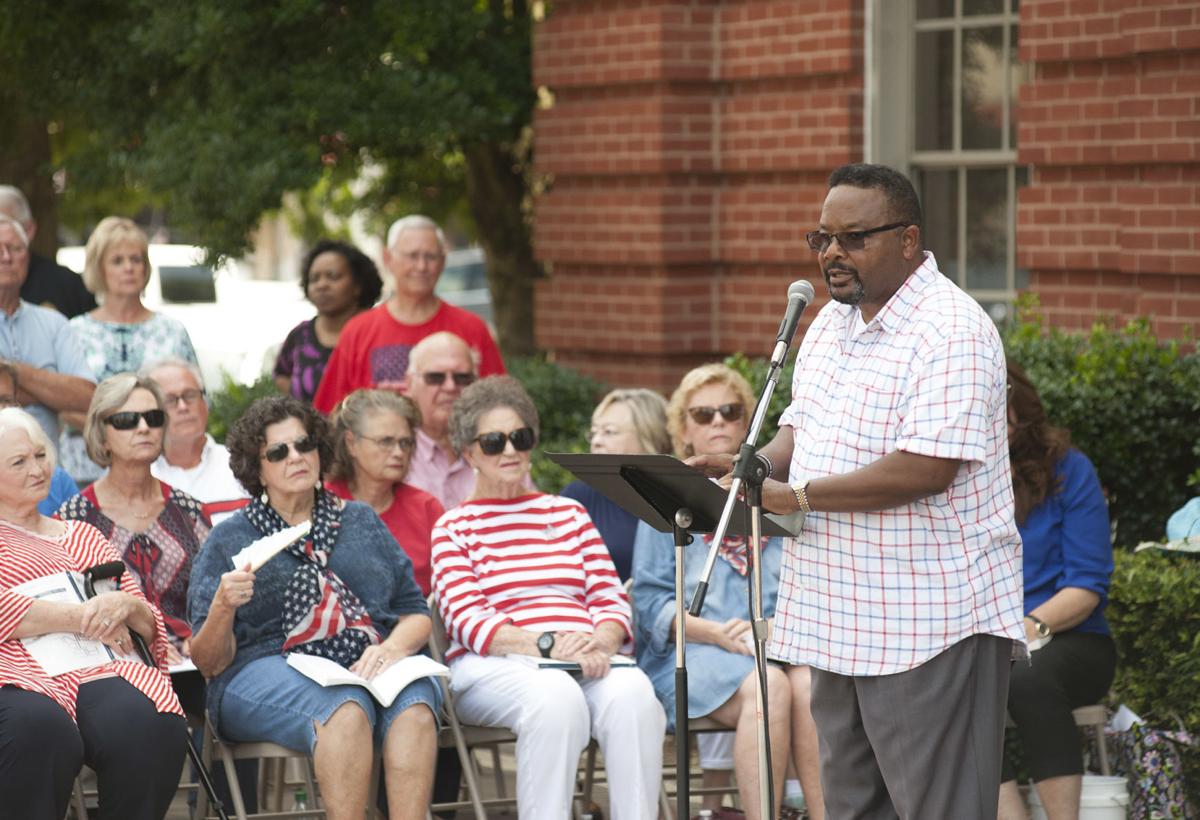 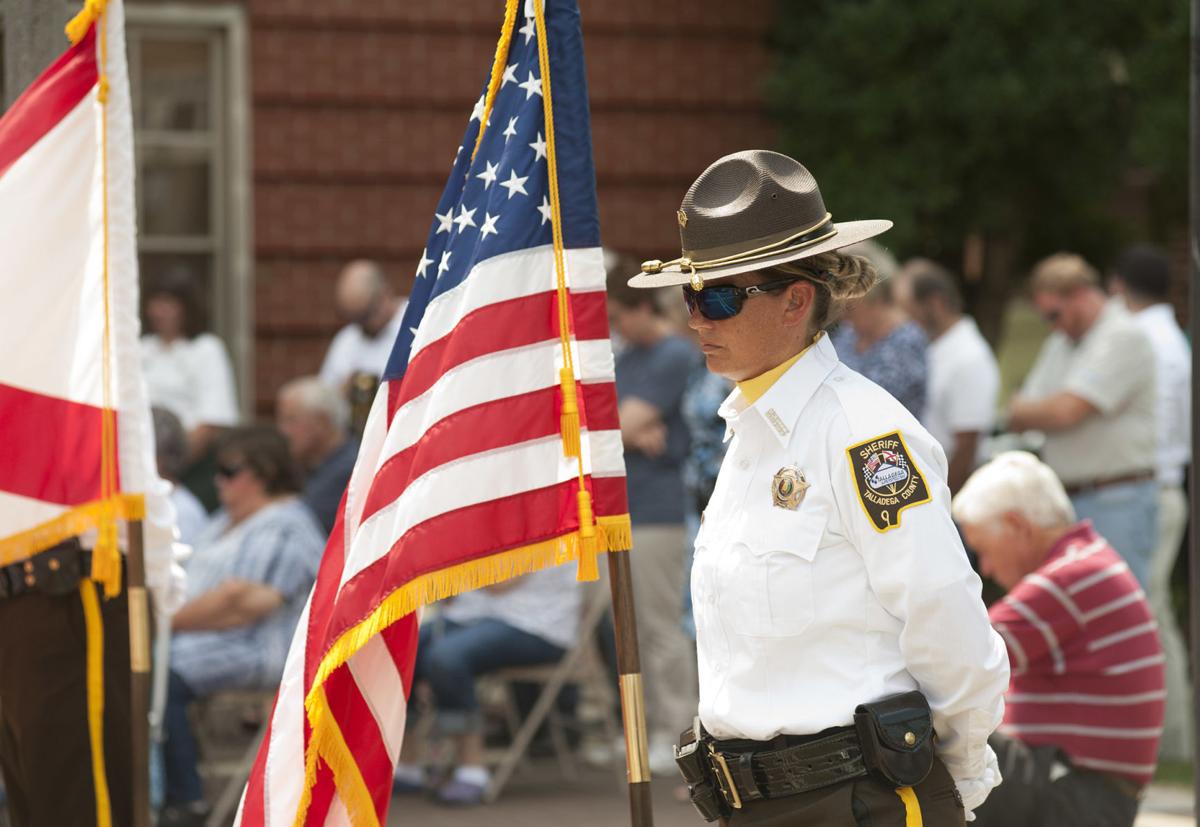 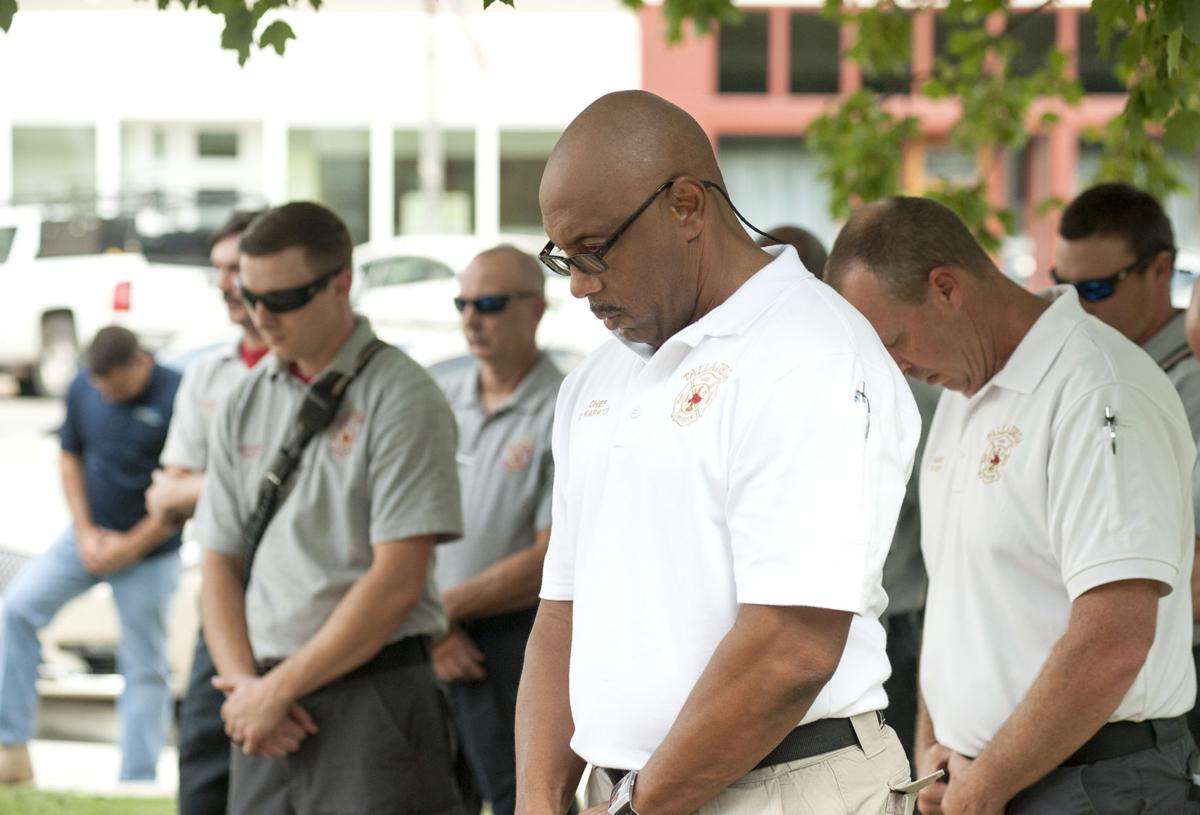 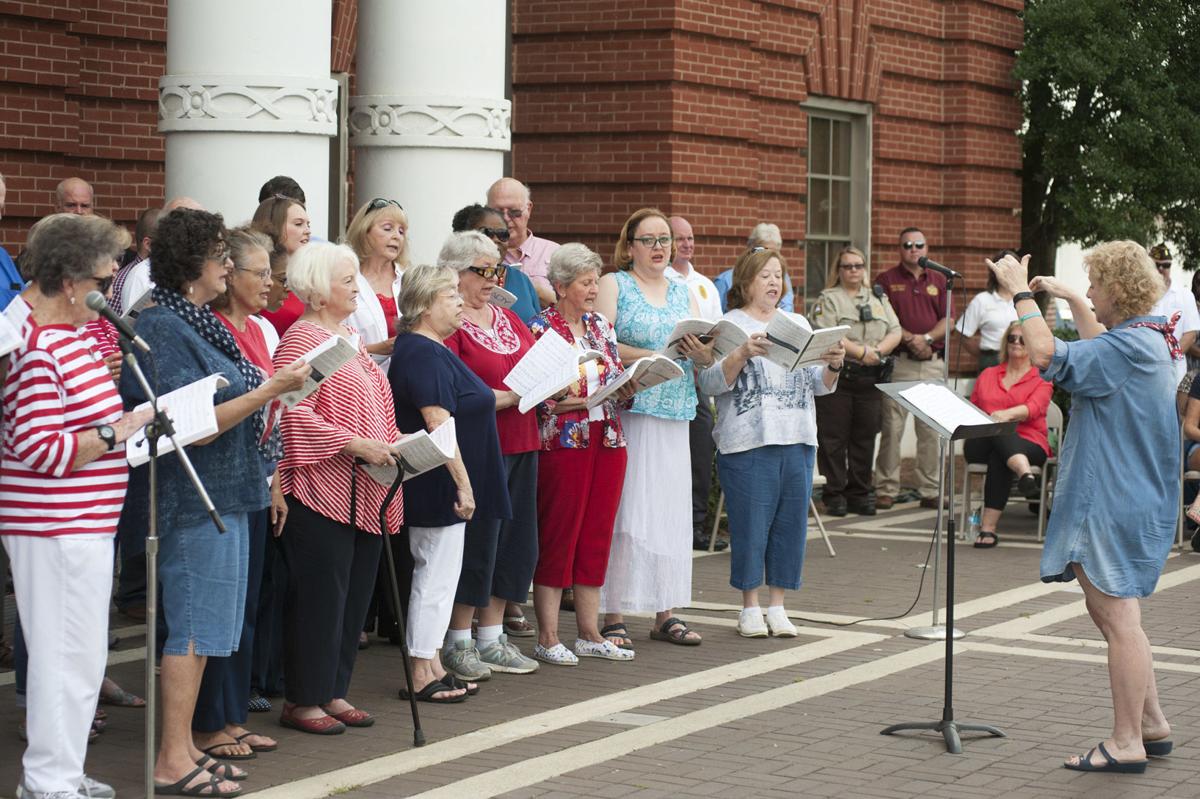 TALLADEGA -- Eighteen years ago Wednesday, the United States was attacked, changing the course of world events and thousands of individual lives.

The organization Pastors Making a Positive Impact in Talladega held a community remembrance ceremony Wednesday afternoon on The Courthouse Square, with the theme “Combating Violence in Our World and Community.”

Stan Hardegen gave a welcome on behalf of the Hall of Heroes Committee, and Munford Mayor Jo Ann Fambrough led the Pledge of Allegiance, with the Rev. Heath Walton then leading the national anthem.

The Rev. Jerrell Hicks gave the Scripture for the event, from Joshua 1:9: “Be strong and courageous, do not be afraid; do not be discouraged, for the Lord your God will be with you wherever you go.”

Talladega police Chief Jason Busby was the afternoon’s keynote speaker, addressing the plight and sacrifices made by first responders not only on the day of the attack, but also down through the years afterward.

Busby said he was a second shift patrol officer with a 4-week old son on that day in 2001. His sister had called to tell him the first plane had hit the World Trade Center, and he turned on the TV just as the second plane hit.

“The loss was tremendous that day, and we should always remember those we lost,” he said. “I am not discounting the civilian losses and suffering that resulted, but I want to focus on the loss of emergency service personnel during the post-cleanup period.

“These were the people who ran toward the danger. The last police officer to die as a result of his actions right after the attacks died Aug. 29, 2019. He had spent the time immediately after the attacks combing landfills for bodies to give families closure and for physical evidence of the attacks.”

To date, 241 police officers and 202 firefighters have died from illnesses traceable to the post-9/11 cleanup, he said, not including state and federal emergency responders.

Some 4,000 first responders have been diagnosed with cancer. Another 3,700 suffer from debilitating mental health conditions, “not including those who suffer in silence. And not just them, but all of the family, friends and co-workers who suffer along with them,” he said.

“We can’t let Sept. 11 become just another day on the calendar. The loss of life from that day changed everything. We should remember those effects daily.”

The Rev. Dante Whittaker, who has worked as a wildland firefighter, led the recognition of and prayer for all of the first responders present on The Square, followed by a remembrance of both the victims and heroes of that by the Rev. Robert Klotz.

The Rev. Walter Jones and Pastor Eugene Jacobs prayed for wisdom and love in the face of an increasingly violent world and community, and the Rev. Phoebe Presson led those assembled in the Lord’s Prayer.

The ceremony closed with the Afternoon of Praise choir singing a medley of “My Country Tis of Thee,” “America The Beautiful” and “The Battle Hymn of the Republic.”