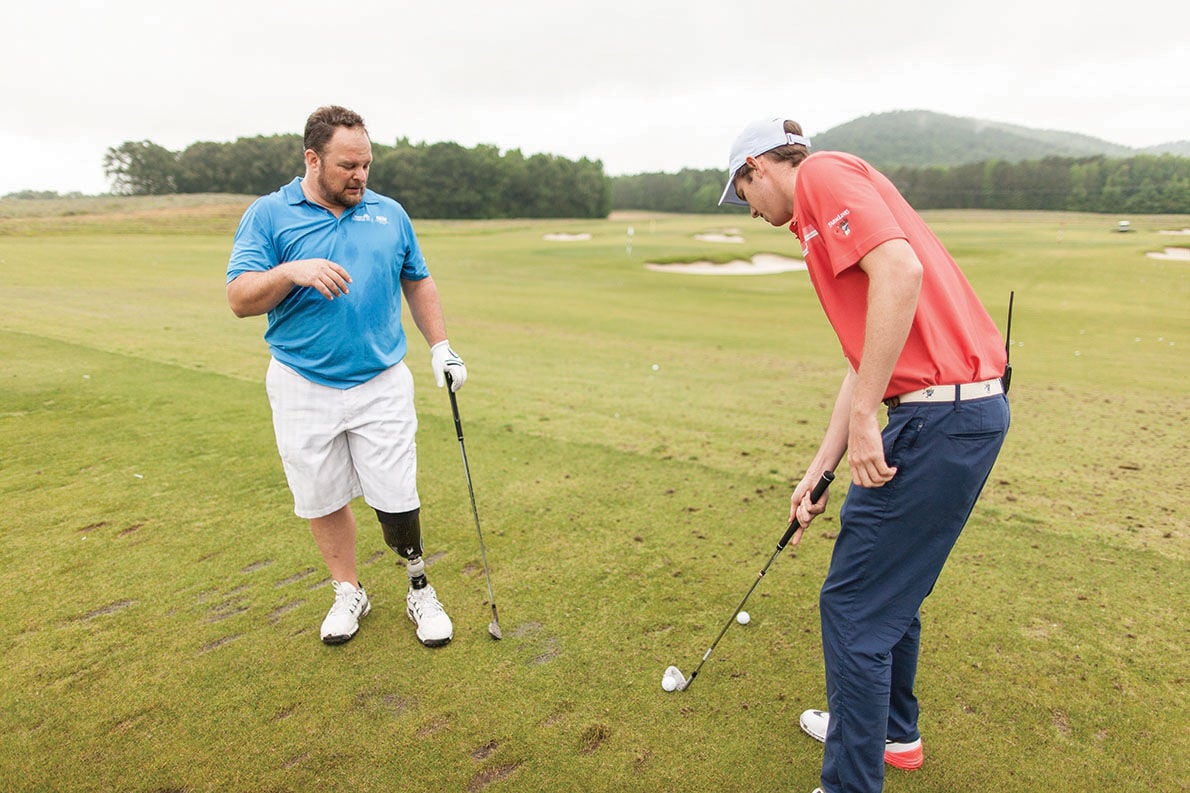 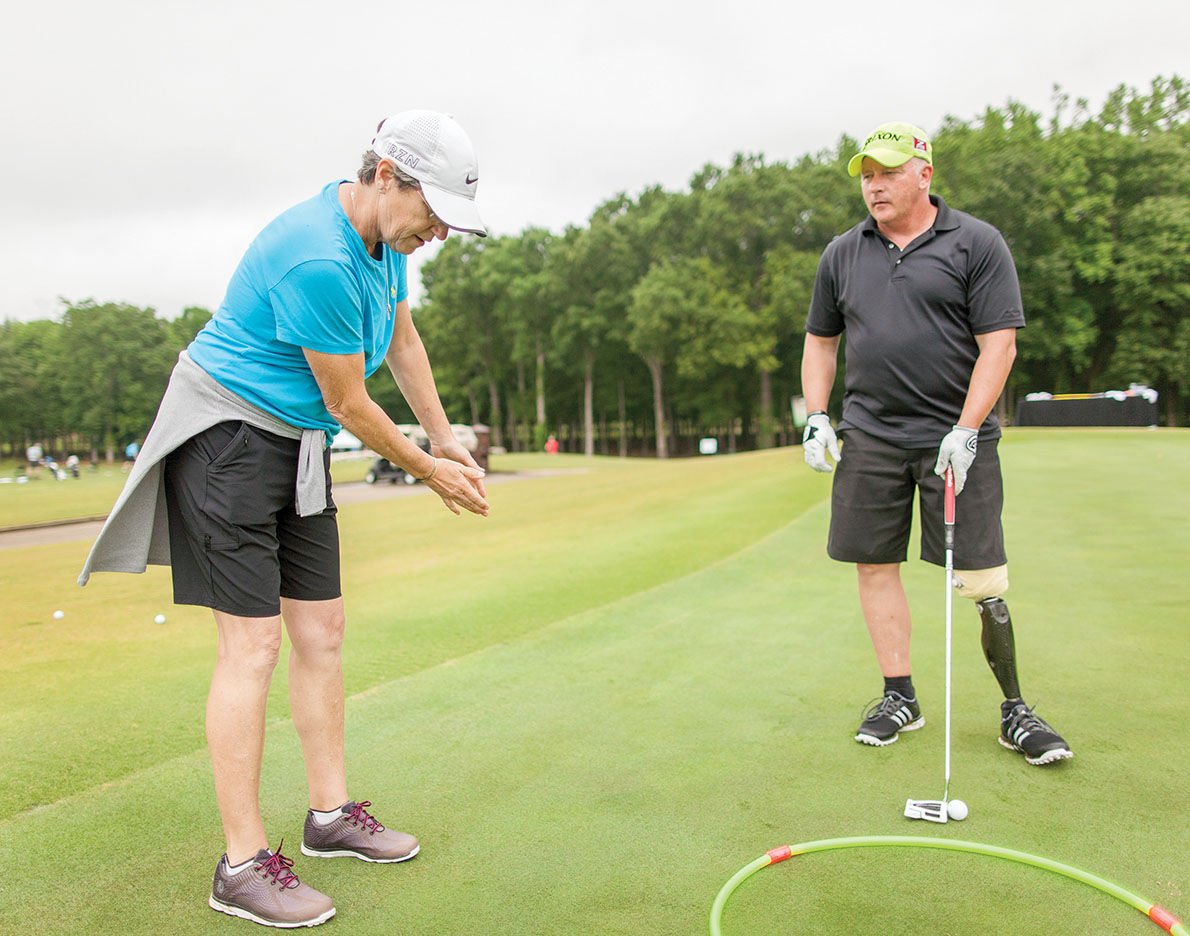 FAYETTEVILLE -- Marine veteran B.J. Ganem stepped up to the golf ball, took a swing and watched the ball land on the green on an overcast but humid Wednesday afternoon at Farmlinks at Pursell Farms.

What made that golf shot amazing was the background of the man who took it.

On Nov. 25, 2004, Thanksgiving night, Ganem was on patrol in Iraq when the vehicle he was driving was struck by a roadside bomb. He lost his lower left leg, suffered a traumatic brain injury and sustained various other wounds.

Ganem was among 22 injured veterans of Team Semper Fi and Team America’s Fund who teed off Tuesday for a three-day golf camp and clinic that ends Thursday at Farmlinks. Two other team members who are participating are on active duty. The 24 participants came from across the nation.

Ganem served four years active duty and five-plus years in the reserves. His reserve unit in Madison, Wisconsin, was called to serve in support operations in May 2004 in Iraq.

Ganem was medically retired on Oct. 29, 2005. He transferred his care from Walter Reed in Maryland to a veterans hospital in Madison.

In total, he endured 19 surgeries, including the removal of shrapnel from his legs and arms, removal of glass shards from his left eye and a revision of his initial amputation.

Over the years, he faced many challenges as he tried to transition back into a “normal” life, coping with his injuries and emotions.

He said he has been able able to thrive in life with support from the Semper Fi Fund and the opportunity to be challenged through sport with Team Semper Fi.

The Semper Fi Fund provides needed resources and lifetime support for wounded, critically ill and injured members of the U.S. Armed Forces and their family members.

Case managers from the fund work one-on-one with servicemembers and veterans in order to understand and support their individual needs now and throughout their lifetime.

Casey Fisher, senior manager for Team Semper Fi and Team America’s Fund, said athletes receive instruction from top-tier golf pros, honing their technique. The injured athletes will play a friendly competition Thursday, showing off the skills they have learned in an 18-hole tournament. “Participants won’t just perfect their swing over the course of the event; they’ll learn to make the sport a tool they can use to aid in their recovery and for a lifetime,” Fisher said.

Fisher said golf, which he called the “greatest game ever played,” requires skills that are as valuable off the green as they are on it.

For the participating athletes who have lost limbs or the use of limbs, improving their swing can also help improve strength and dexterity.

“For all those recovering, the focus and discipline necessary to navigate a golf course will also help them navigate the road to recovery,” Fisher said.

Fisher said golf is a sport that can be played by people of all ability levels and is the ultimate challenge both mentally and  physically for service members on their road to recovery.

“Playing golf helps them sharpen their minds and focus, as well as tuning up their bodies. It takes them to a place where they are able to recover. The degree of difficulty of this game requires a lot of focus, determination, and ability to adapt -- all qualities of our Team Semper Fi and Team America’s Fund,” Fisher said.

Ganem graduated with a master’s degree from the USC School of Social Work. He works as a case manager for Semper Fi Fund.

He said he played golf recreationally with his son but didn’t think at that time the game was hard, “but it is,” he said. “It teaches you a lot of life’s lessons and it helps you physically.”

Brian McPherson, a senior manager for the Semper Fi Fund and America’s Fund, said Ganem this year completed the 26.2 mile Boston Marathon. He was also invited to play in the George W. Bush Wounded War Golf Tournament in Austin, Texas.

“You had to be good to get invited to that,” McPherson said.

Ganem spoke about all the support Bush gives to servicemen and women. “He visited me in the hospital after I got wounded. He is an ally to those who serve or have served. He literally remembers details about those he visits,” he said.

Fisher, McPherson and Ganem were extremely impressed with Pursell Farms.

“This is the best venue we’ve been to from the facilities to the pros to the golf course,” Fisher said.

Layne Savoie, golf pro at Farmlinks, said a camp and clinic like this one takes plenty of planning. Savoie has a background in group golf instruction and said the injured veterans have a keen perception of life.

“They are patient when it comes to the game. They have a knack for learning,” he said.

For more information on Semper Fi Fund, got to semperfifund.org.