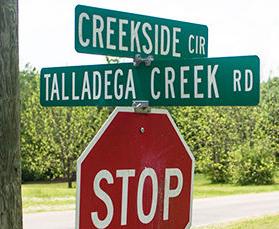 Talladega Police are investigating a shooting at a residence on Creekside Circle near Bemiston where a minor child shot a suspected burglar.

Talladega police are investigating an incident at a residence on Creekside Circle near the Bemiston community, where a minor child shot a suspected burglar Wednesday morning, according to police Capt. Leon Thomas.

The intruder was taken to Brookwood Health Center-Citizens Baptist Medical Center. The extent of his injuries were unknown late Wednesday. The age of the child and the suspect’s identity have not yet been released.

Talladega police Chief Jason Busby issued a brief written statement Wednesday afternoon confirming authorities were investigating a shooting in the Talladega Creek area Wednesday between 9 and 9:30 a.m. The investigation continued all day Wednesday, but no new information was made public.