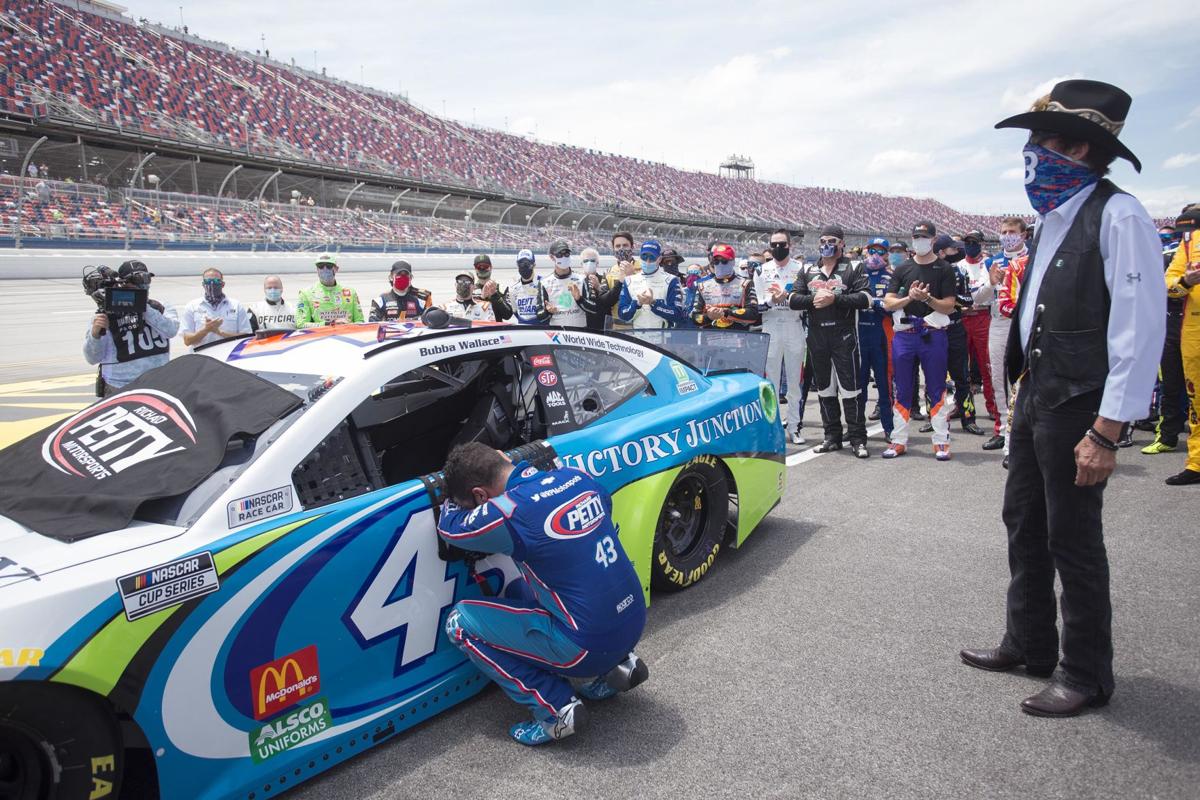 Bubba Wallace is overcome with emotion before Monday's GEICO 500. Team owner Richard Petty is to the right. 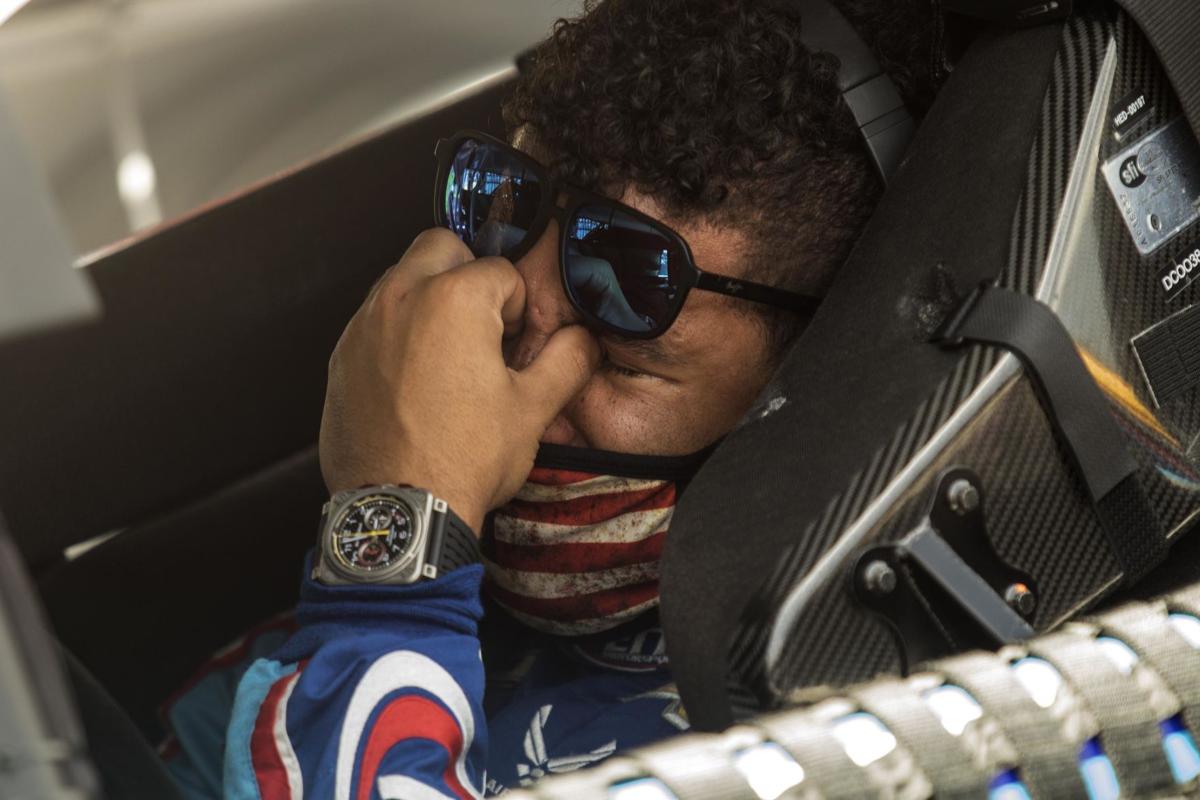 Fellow drivers and crew members support NASCAR's Bubba Wallace, who is in the No. 43 car.

It was a rough day for NASCAR driver Darrell "Bubba" Wallace. A rough weekend. A rough couple of weeks.

Wallace, the lone Black driver on the Cup Series, has rocketed into the public consciousness beyond the auto racing world. In an interview with CNN two weeks ago, he pushed for the ban of Confederate flags at NASCAR events. When NASCAR agreed and put its weight behind a ban, Wallace became a lightning rod for race fans who didn't like the decision.

It came to a head late Sunday afternoon. NASCAR said a noose was found in Wallace's garage stall, and by Monday morning, the FBI was investigating.

"It's been hell," Wallace said in an interview with Fox Sports after Monday's GEICO 500 at Talladega Superspeedway.

Then he changed again: "I wouldn't really say burden, either. I'm proud to say where I'm at."

Wallace became a lightning rod of a different sort before Monday's race — but in a good way. His fellow drivers and their crew members pushed his car to the front of pit row and stood with him during the national anthem.

It was an emotional moment, and Wallace struggled to keep his composure.

"The emotion he showed, he was really thankful to see everyone's support," said race winner Ryan Blaney, who is Wallace's best friend on the Cup Series. "That got me a little bit. Then just everyone going up to him after the anthem or before the anthem was special."

The mass gathering was generated from an idea by former Cup champion Jimmie Johnson, who messaged other drivers that he was going to stand with Wallace during the anthem and said they were welcome to join him.

Johnson said that another driver, Kevin Harvick, had the idea of pushing Wallace's car to the front. He added that other drivers and crew members wanted to join and stand with Wallace, too.

"I'm obviously very proud of our sport, the drivers and crew members that wanted to stand up today and stand next to Bubba Wallace," Johnson said in a video call with reporters after the race. "That's really the moral of this story."

Video of the event broke quickly online and in the news media. Johnson said he didn't have an idea of how many people participated until the brief rain delay about one-third into the GEICO 500. Johnson used that time to check his phone and saw photos and video.

"To see how many people were on pit road showing their support for Bubba, that warmed me up tremendously," Johnson said. "It was hard to really know it in the moment. We're obviously out there on the grid, without fans in the stands, it's a much different environment. As I looked over my shoulder, as I saw the photos afterwards, realized the power of that statement and how many people were involved."

Although only 5,000 fans were allowed to attend because of COVID-19 restrictions, and they were spread out in stands that can hold 80,000, it was clear that Wallace had at least a few supporters in the group.

That became obvious when Wallace took the lead for a lap late in the race, before eventually finishing 14th.

"When he got to the lead, came down the front straightaway, we were only two-wide at that point," said Ricky Stenhouse Jr., who finished second to Blaney. "I looked at the stands, watched all the people jump up and cheer. That was pretty cool."

Wallace was not made available to reporters after the race, but he did do that short interview with Fox Sports. He stood on the track while speaking, with a gathering of mostly Black fans cheering from the stands behind him. When Wallace asked, they told him they were from Atlanta.

"That is so cool," Wallace said. "The sport is changing."

He didn't wear his mask, which NASCAR mandates for all interviews to help stem the spread of COVID-19.

"I wanted to show whoever it was that you're not going to take away my smile, and I'm going to keep on going," he said.

He also lamented how he let a victory slip away.

"I know I should've won that damn race," he said, laughing. "I ran out of gas. The stars didn't align completely for us. But, all in all, we won today. The pre-race deal … the pre-race deal was one of the hardest things I've had to witness in my life.

"From all the supporters from drivers to crew members, everybody here, the (expletive) fan base … it's truly incredible, and I'm proud to be part of this sport."