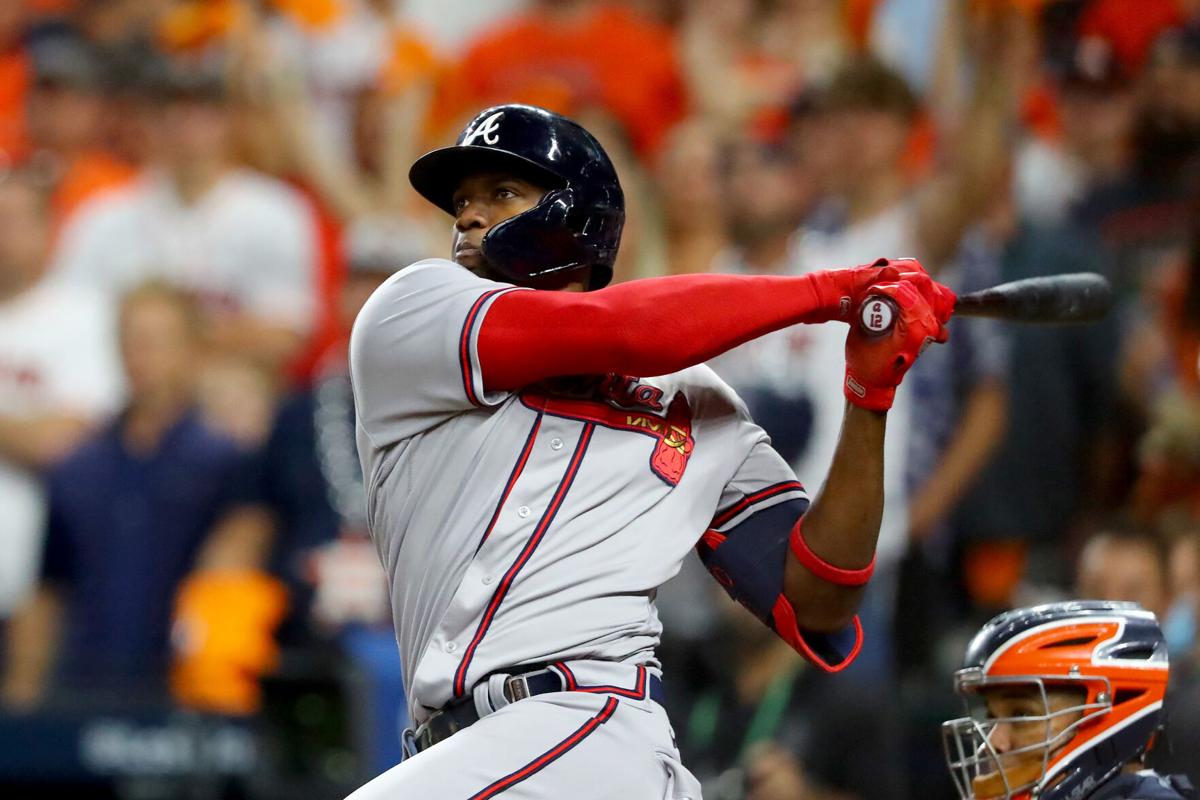 The Atlanta Braves' Jorge Soler hits a three-run home run against the Houston Astros during the third inning in Game 6 of the World Series at Minute Maid Park on Tuesday, Nov. 2, 2021, in Houston. (Curtis Compton/Atlanta Journal-Constitution/TNS) 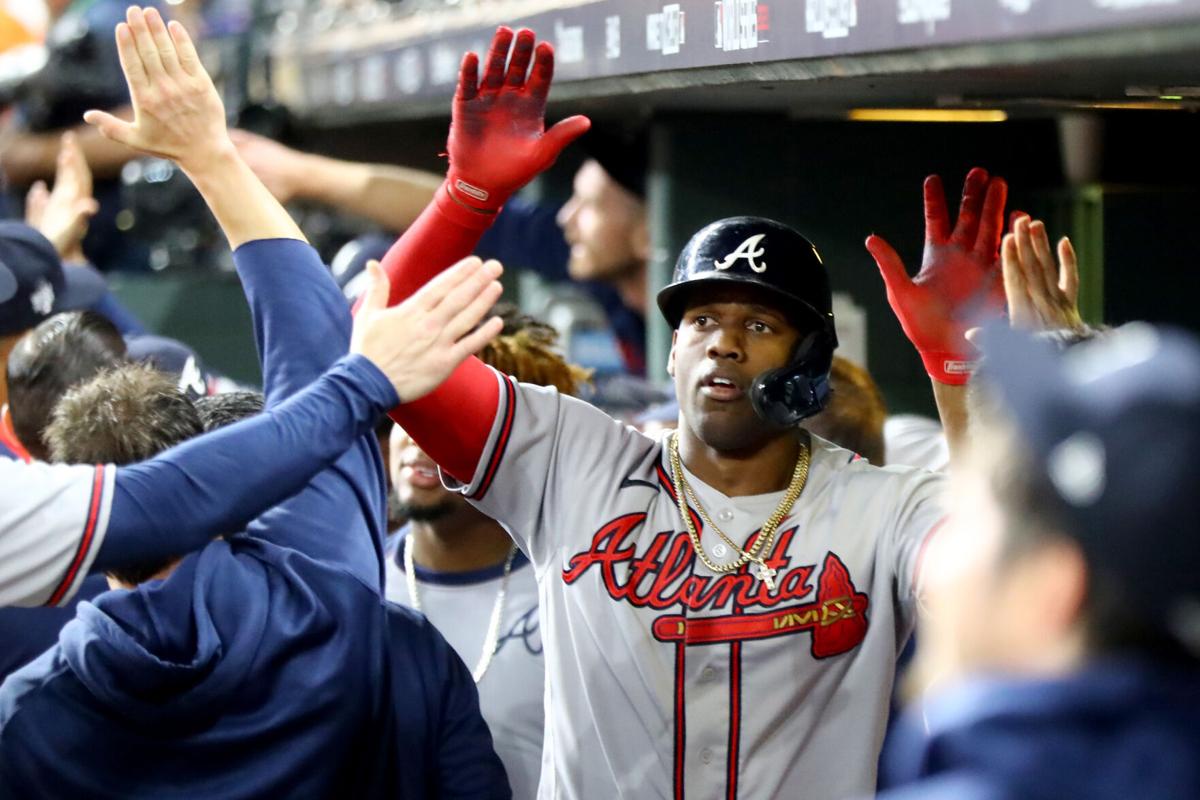 The Atlanta Braves' Jorge Soler celebrates his three-run home run with teammates in the dugout against the Houston Astros during the third inning in Game 6 of the World Series at Minute Maid Park on Tuesday, Nov. 2, 2021, in Houston. (Curtis Compton/Atlanta Journal-Constitution/TNS) 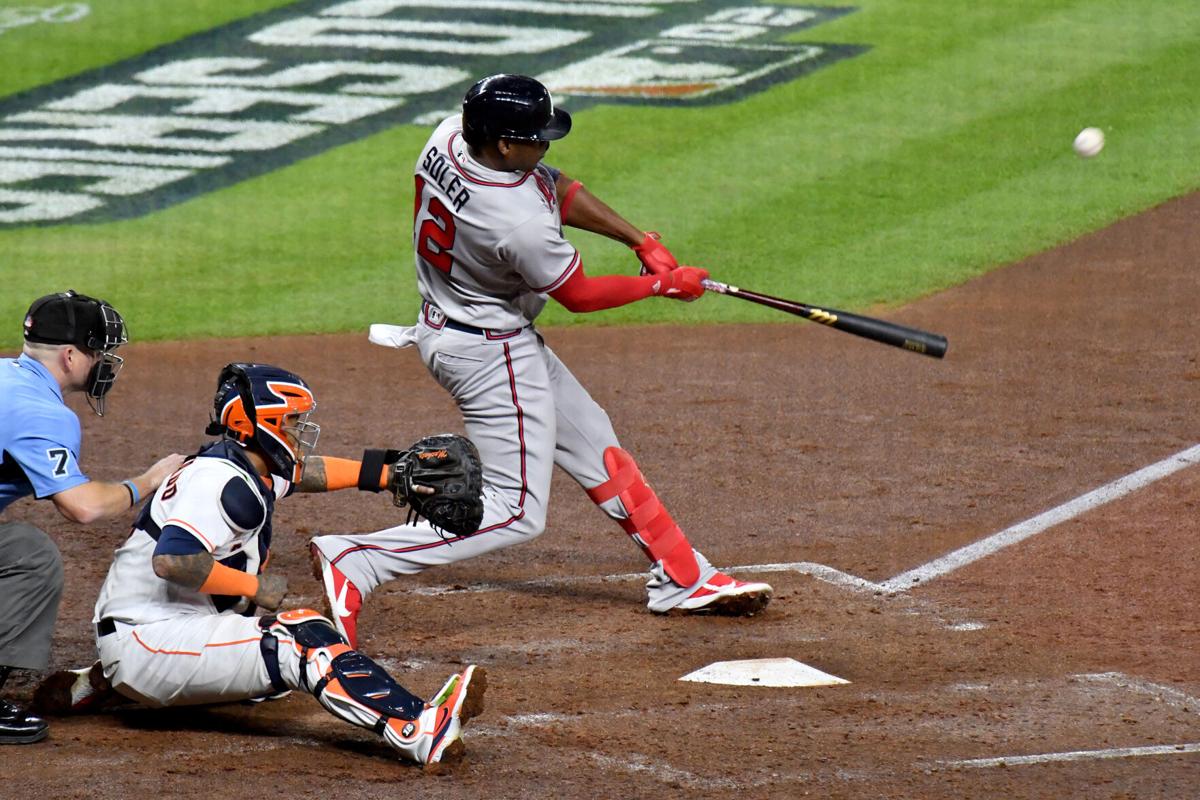 The Atlanta Braves' Jorge Soler hits a three-run home run in front of Houston Astros catcher Martin Maldonado during the third inning in Game 6 of the World Series at Minute Maid Park on Tuesday, Nov. 2, 2021, in Houston. (Hyosub Shin/Atlanta Journal-Constitution/TNS) 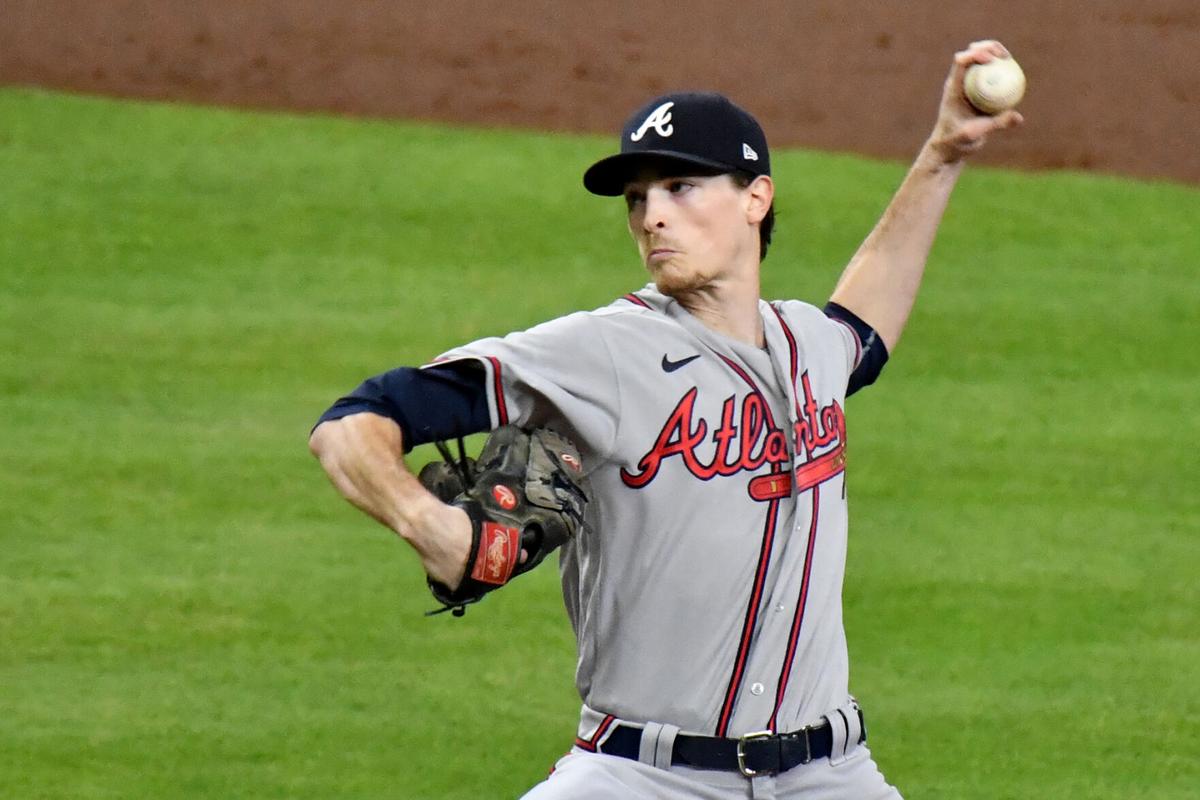 Atlanta Braves starting pitcher Max Fried works against the Houston Astros during the first inning in Game 6 of the World Series at Minute Maid Park on Tuesday, Nov. 2, 2021, in Houston. (Hyosub Shin/Atlanta Journal-Constitution/TNS) 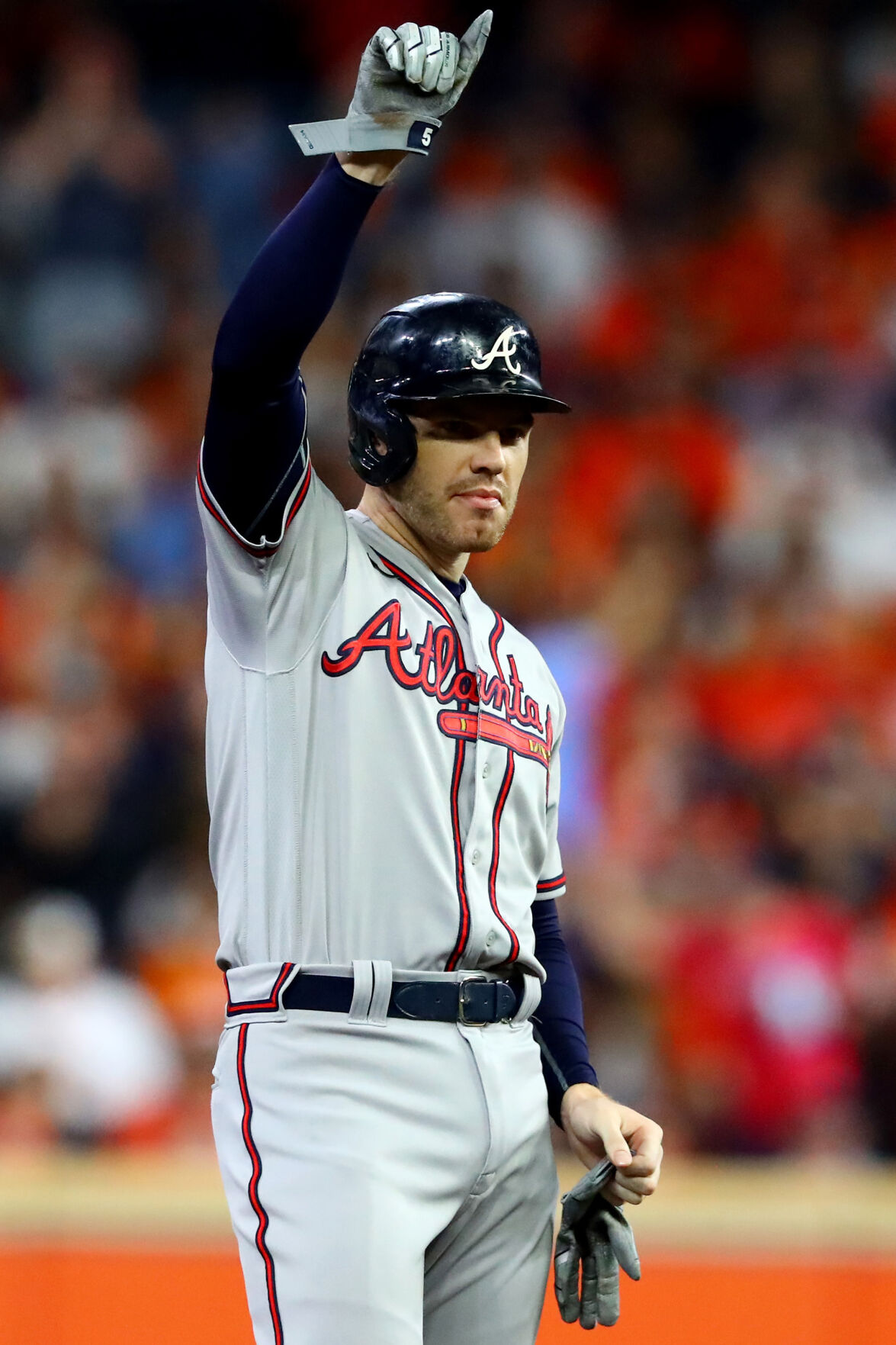 The Atlanta Braves' Freddie Freeman reacts after hitting a RBI double during the fifth inning against the Houston Astros in Game 6 of the World Series at Minute Maid Park on Tuesday, Nov. 2, 2021, in Houston. (Curtis Compton/Atlanta Journal-Constitution/TNS) 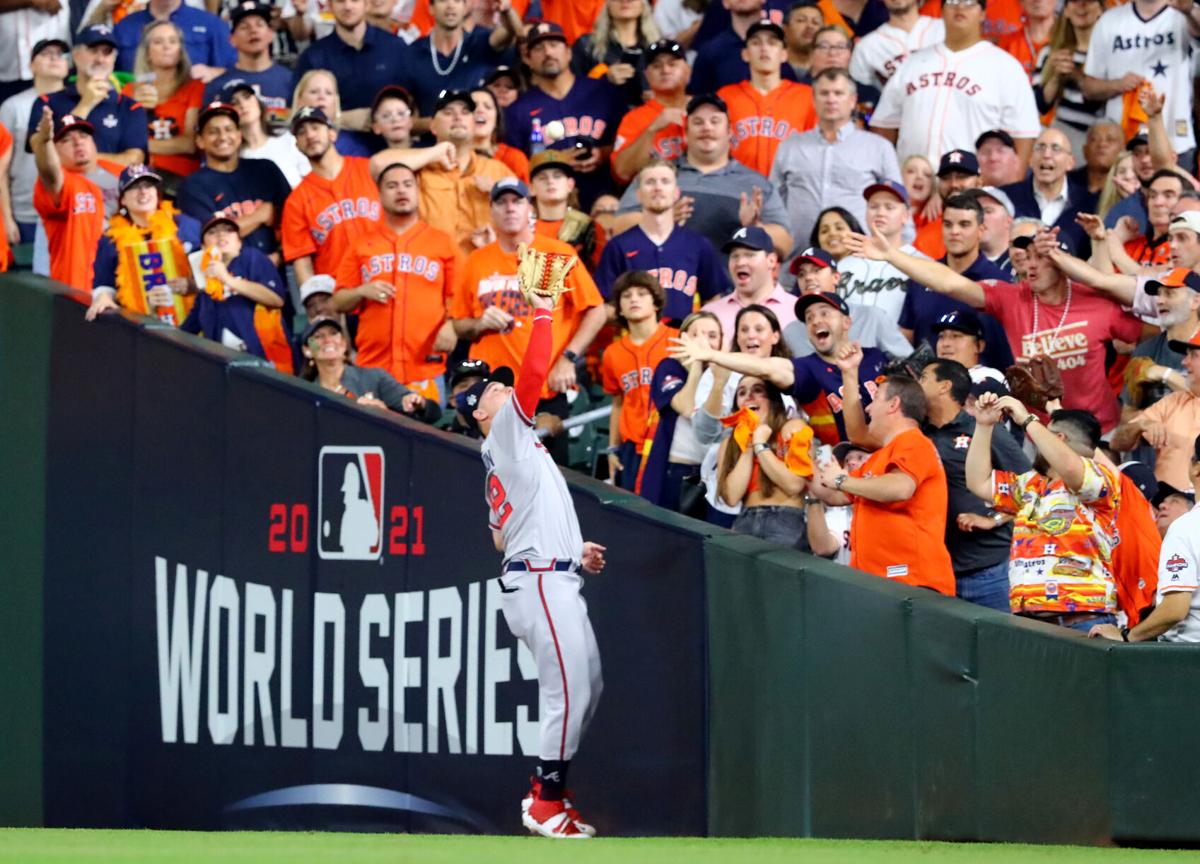 Atlanta Braves right fielder Joc Pederson fields a fly ball in foul territory during the second inning against the Houston Astros in Game 6 of the World Series at Minute Maid Park on Tuesday, Nov. 2, 2021, in Houston. (Curtis Compton/Atlanta Journal-Constitution/TNS) 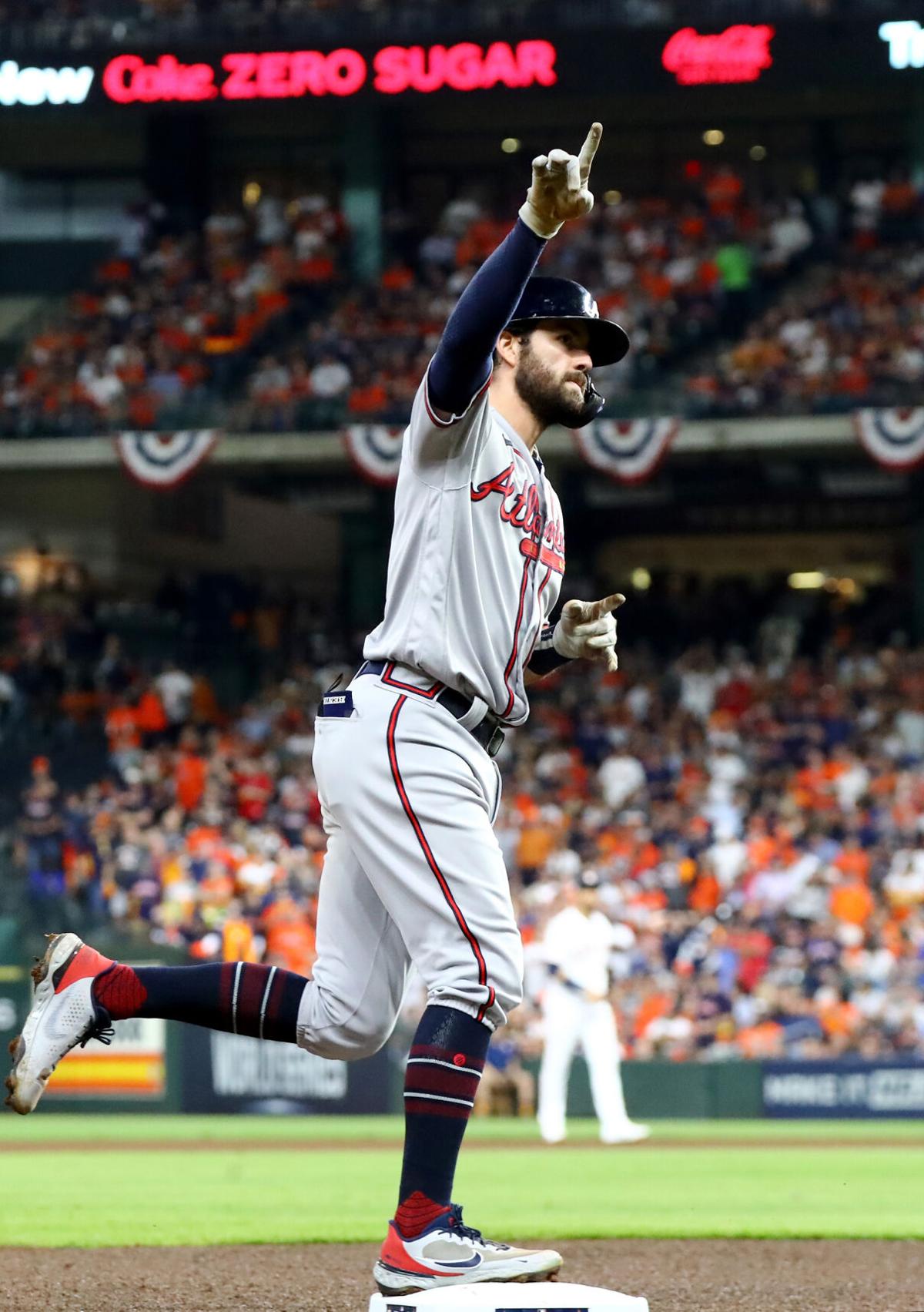 The Atlanta Braves' Dansby Swanson jogs around the bases after he hit a two-run home run during the fifth inning against the Houston Astros in Game 6 of the World Series at Minute Maid Park on Tuesday, Nov. 2, 2021, in Houston. (Curtis Compton/Atlanta Journal-Constitution/TNS) 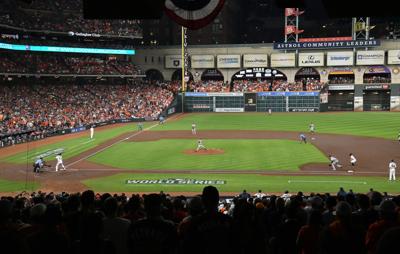 HOUSTON – When the Braves reported to spring training in February, they had championship aspirations. They fell just short last October and spent the winter supplementing a talented young core that’d embarked on three postseason runs. They entered this season believing they’d assembled a roster, both talent and chemistry-wise, that could finally break through.

Nobody could’ve imagined how the ensuing journey would unfold.

Twenty-six years and 16 postseason appearances since that fateful Oct. 28 day in 1995, the Braves brought Atlanta its second World Series championship Tuesday in Houston. This team’s one-of-a-kind story will be shared and referenced across generations with the simplest yet most invaluable lesson: Never give up.

The Braves won the World Series by defeating the Astros 7-0 in Game 6, completing one of the most improbable runs in professional sports history. Exactly 9,502 days after Bobby Cox’s Braves delivered Atlanta its first title, Brian Snitker, a Cox disciple who’s spent over four decades in the organization, led the Braves to their second championship — in the unlikeliest of fashions.

It was hard to fathom *this* being the Braves team that separated itself from past postseason disappointment. Then again, maybe it wasn’t. Uphill climbs were like strolls on the treadmill for these Braves. Their propensity for overcoming the odds was part of their charm. It formed their identity. It’s the reason they sit atop the baseball world in 2021. And it's why they’ll be remembered throughout the south for eons.

Their final victory was appropriately highlighted by slugger Jorge Soler, one of the July acquisitions forever etched in Braves history. Soler’s colossal third-inning homer off Luis Garcia soared over left field and out of Minute Maid Park, giving the Braves a three-run lead they wouldn’t relinquish.

It was Joc Pederson in the NL Division Series against Milwaukee. It was Eddie Rosario in the NL Championship Series against the Dodgers. It was Soler in the World Series. The Braves orchestrated perhaps the greatest trade deadline in MLB history, turning a lost campaign into one that resulted in a parade.

The Braves had floundered for months. Injuries dominated the headlines. The names are well known at this juncture: Mike Soroka never pitched. Travis d’Arnaud missed months. Huascar Ynoa punched a bench. Marcell Ozuna was injured and arrested for domestic violence. Ian Anderson had a sore shoulder. MVP candidate Ronald Acuna tore his ACL on the eve of the first half, topping off a miserable 89-game stretch.

Acuna’s injury triggered a series of transactions that are now immortalized in Braves lore. General manager Alex Anthopoulos, with his team at 44-45 and four games behind the Mets, swung trades for Pederson and Stephen Vogt during the All-Star break. The message resonated through the clubhouse: This team still has a chance.

Weeks later, keeping with the same theme, Anthopoulos concocted one of the greatest trade deadlines of all-time. He replaced Acuna by committee, adding Soler, Rosario and Adam Duvall to join Pederson. He also added Richard Rodriguez, who helped the bullpen for a stretch.

While some wrote them off, the Braves saw an opportunity. The National League East was beautifully mediocre. Naysayers questioned what getting into the postseason as a middling division champ was even worth, but Anthopoulos stressed: Just get into the tournament and one never knows what could happen.

Finally, on Aug. 6 against the Nationals, the Braves moved to 56-55 with their fourth consecutive win. It was their first time over .500 on the season. A week later, they reeled off a 9-0 road trip in Washington, Miami and Baltimore, surging into first place in the NL East.

The Braves outpaced their division the rest of the way. The Mets collapsed while the Phillies embodied a slightly above-average team. The Braves went from a club that once alternated 18 wins and losses in July to one finding itself at the optimal time.

Players have credited their mid-to-late September western road trip as another turning point. They went 7-3, rebounding after losing a series in San Francisco to take three of four in Phoenix and sweep the spiraling Padres.

The Braves returned home and swept the Phillies to win the division and reach the postseason for the fourth straight year. First baseman Freddie Freeman made it clear afterwards: This isn’t playing with house money. They expected to contend for the championship.

Outsiders generally didn’t see it similarly. A common thought was even if they snuck in thanks to the laughable NL East, there wasn’t a way the Braves, perennial postseason failures, could banish the ghosts that have haunted them since blowing a 2-0 World Series lead in 1996 with this makeshift roster.

They drew the Brewers in the opening round, a 95-win club featuring dominant pitching. The Braves lost the first game, 2-1, before winning the next three, outpitching Milwaukee along the way. Pederson had two pinch-hit homers in the series, winning over Atlanta’s hearts with his quirky personality and string of pearls.

Next were the reigning champion Dodgers, who’ve long been a source of Atlanta anguish. The Dodgers eliminated the Braves in 2013, 2018 and 2020, when the Braves went what was considered “full-Atlanta” and lost a 3-1 advantage in the NL Championship Series.

These Braves, completely numb to their city’s checkered past, walked off the first two games against the Dodgers at Truist Park. They won once in Los Angeles, which was enough to set up the clinching victory at home.

Making matters sweeter, they went up 3-1 and advanced this time. The Braves created a #killthenarrative rally cry on social media – an inconceivable concept the last time this organization won the Fall Classic – as the Braves exorcised their Dodgers demons.

They ousted the champs to earn their first World Series berth since 1999. Their NLCS MVP: Rosario, who went 14-for-25 (.560) with a double, triple, three homers and nine RBIs.

Unsurprisingly, the Braves were underdogs against the mighty Astros, who were trying to capture an untainted title and silence the critics of their 2017 run that was enveloped in a sign-stealing controversy. The Braves split the first two games in Houston, a near-necessary feat without homefield advantage, to send the World Series tied to Truist Park.

The Braves proceeded to start three rookies – the first time in World Series history that’s occurred – over the next three nights. In Game 3, Anderson pitched five no-hit innings to lead the Braves to a 2-0 win. In Game 4, Dansby Swanson and Soler launched back-to-back homers late and the Braves stunned the Astros, 3-2.

Game 5 was a reminder that it wouldn’t be easy. The Braves went up 4-0 on Adam Duvall’s first-inning grand slam. They couldn’t silence the Astros’ offense with a second straight bullpen game, however, and they lost 9-5. It was their first defeat at Truist Park in the postseason (7-1) and shifted the series back to Houston.

There goes the “Atlanta sports” thoughts again. But the Braves squashed those behind Max Fried’s arm and Soler’s bat. Fried, coming off two underwhelming outings, looked like himself again despite having his ankle stepped on while covering first base in the opening frame.

Just like Game 6 in 1995, the Braves had a lefty dealing on the mound. Fried pitched six scoreless innings, allowing just four hits, preventing the Astros from assembling anything close to a comeback attempt. No Astro reached scoring position after the first inning against Fried.

The Braves built a five-run lead with towering shots by Soler and Swanson – the two individuals who also helped deliver their Game 4 victory.

To top it off, Freeman, the franchise mainstay who waited through the rebuilding years to experience this October, laced a double to score the Braves’ sixth run. He then homered in the seventh, which brought half his teammates out onto the field in celebration. Freeman can call himself a multi-time All-Star, MVP and now, most importantly, a world champion.

Just as Pederson and Rosario dominated the prior series, the World Series belonged to Soler. He homered three times, launching a lead-off blast in Game 1 and instrumental shots in Game 4 and 6. The trade deadline didn’t just save the Braves’ season. It produced the second major championship in Atlanta history.