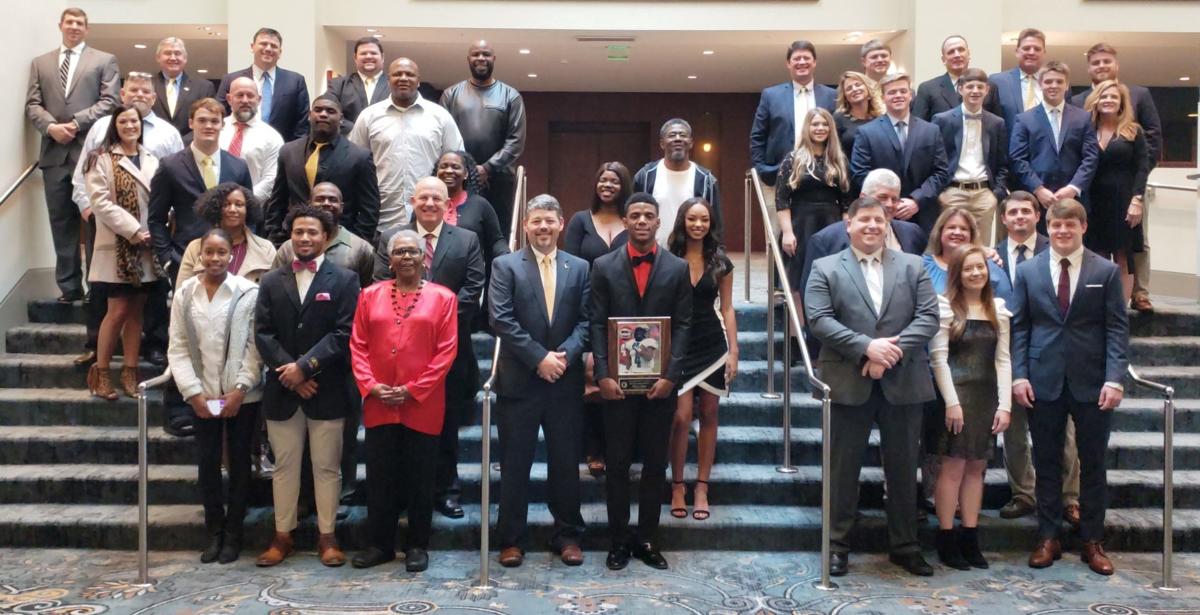 Calhoun County's seven finalists and their supporters at the Alabama Sports Writers Association annual back and lineman of the year banquet. 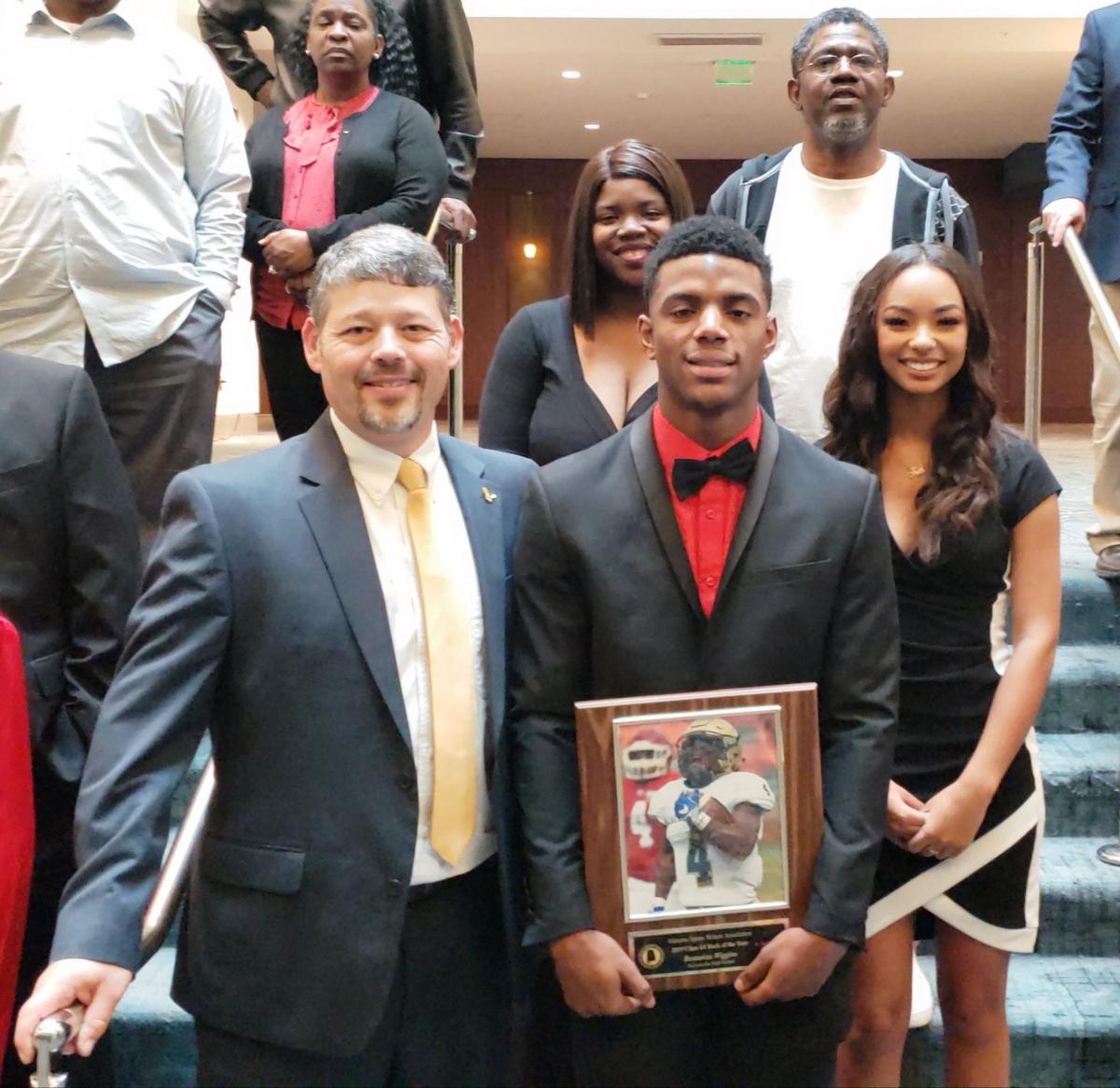 Class 4A back of the year Rontarius Wiggins, from Jacksonville, and his group at Wednesday's ASWA awards banquet. 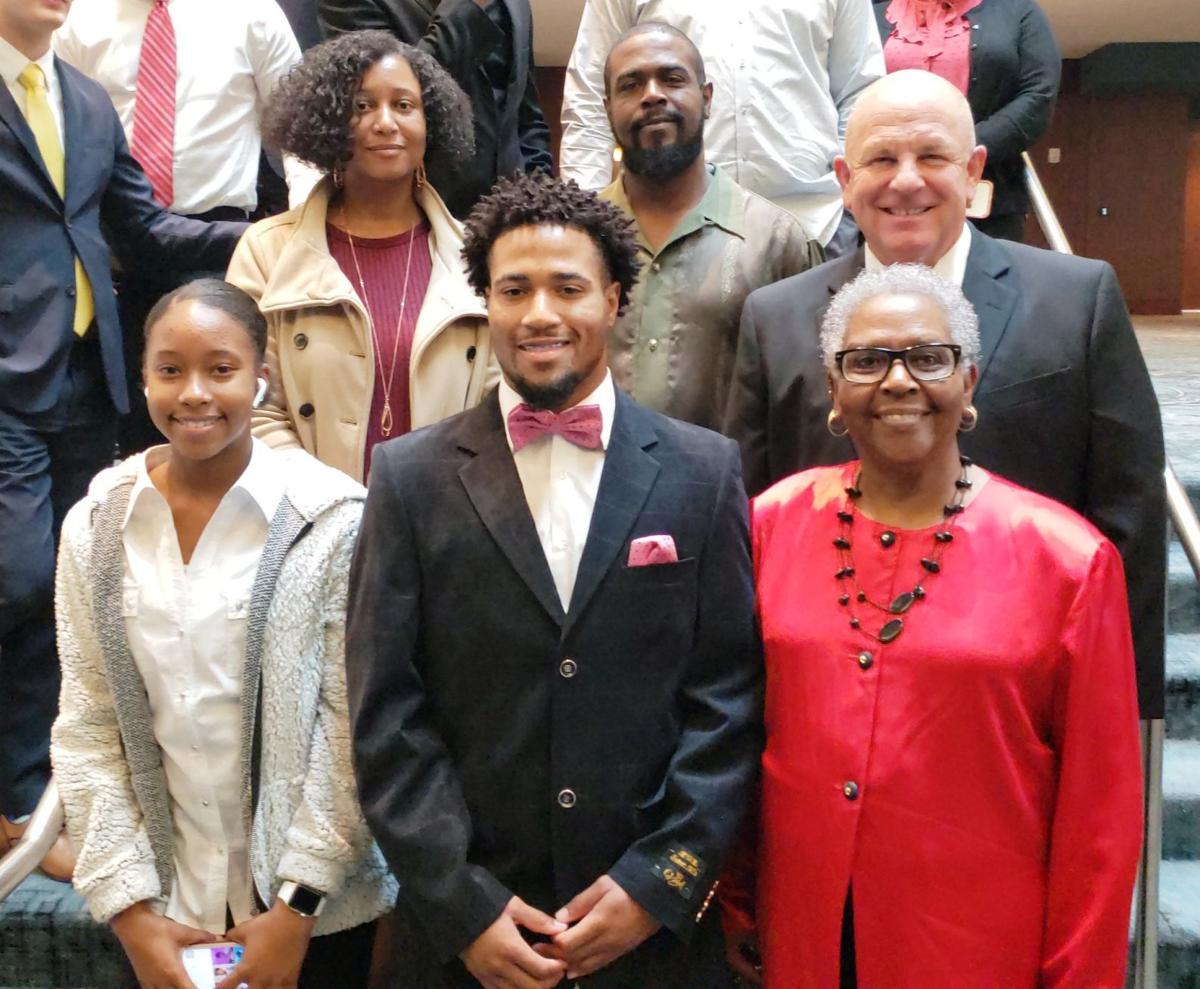 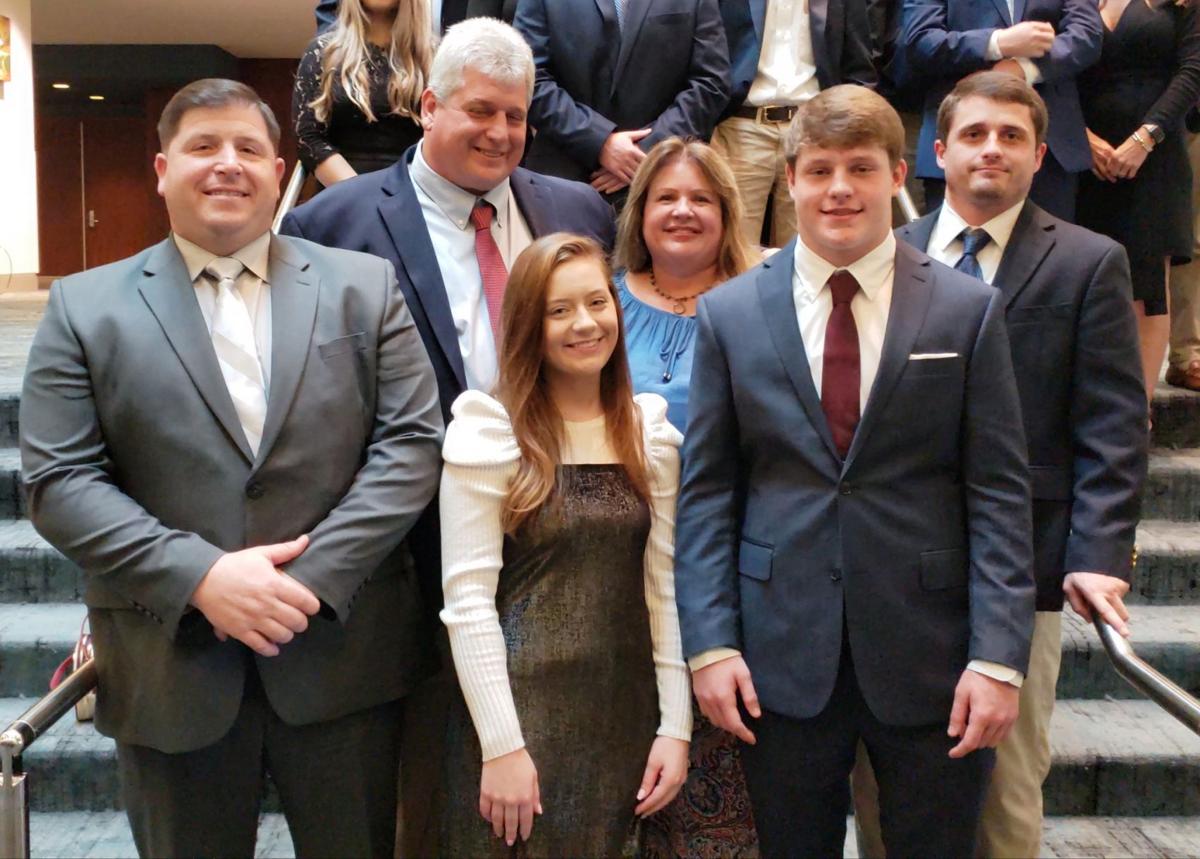 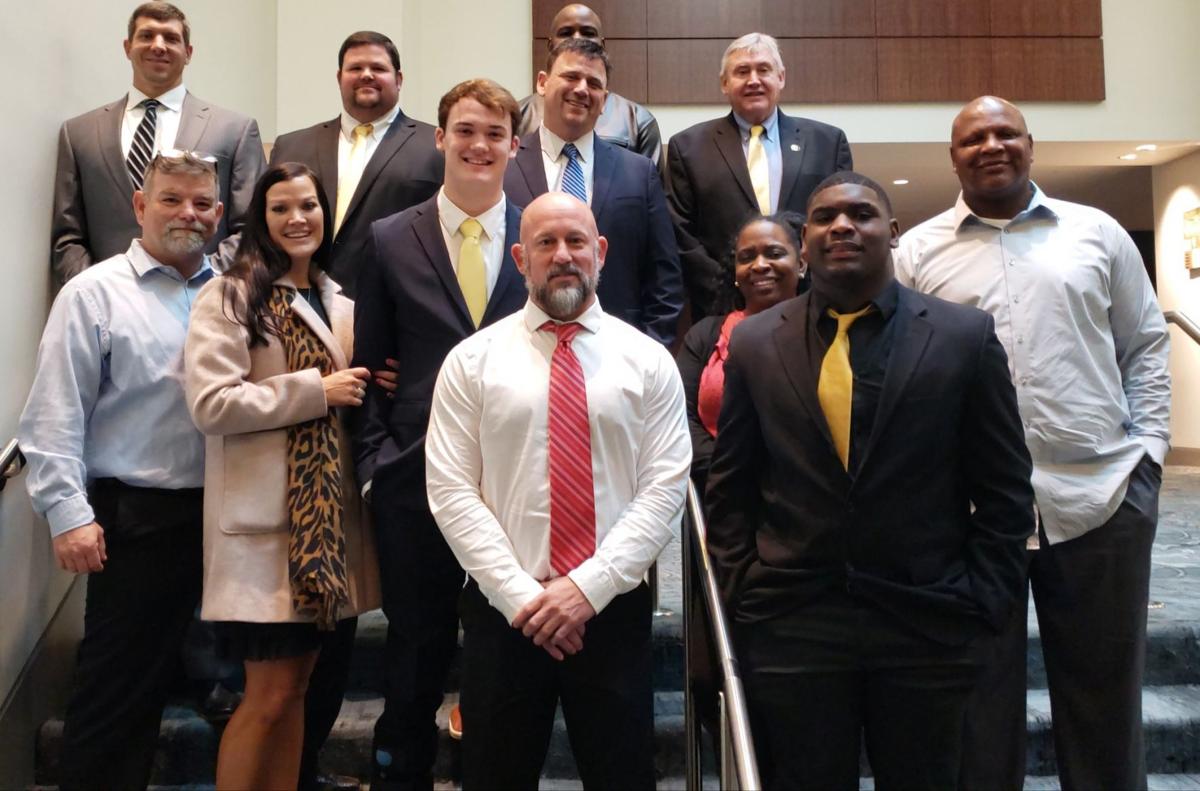 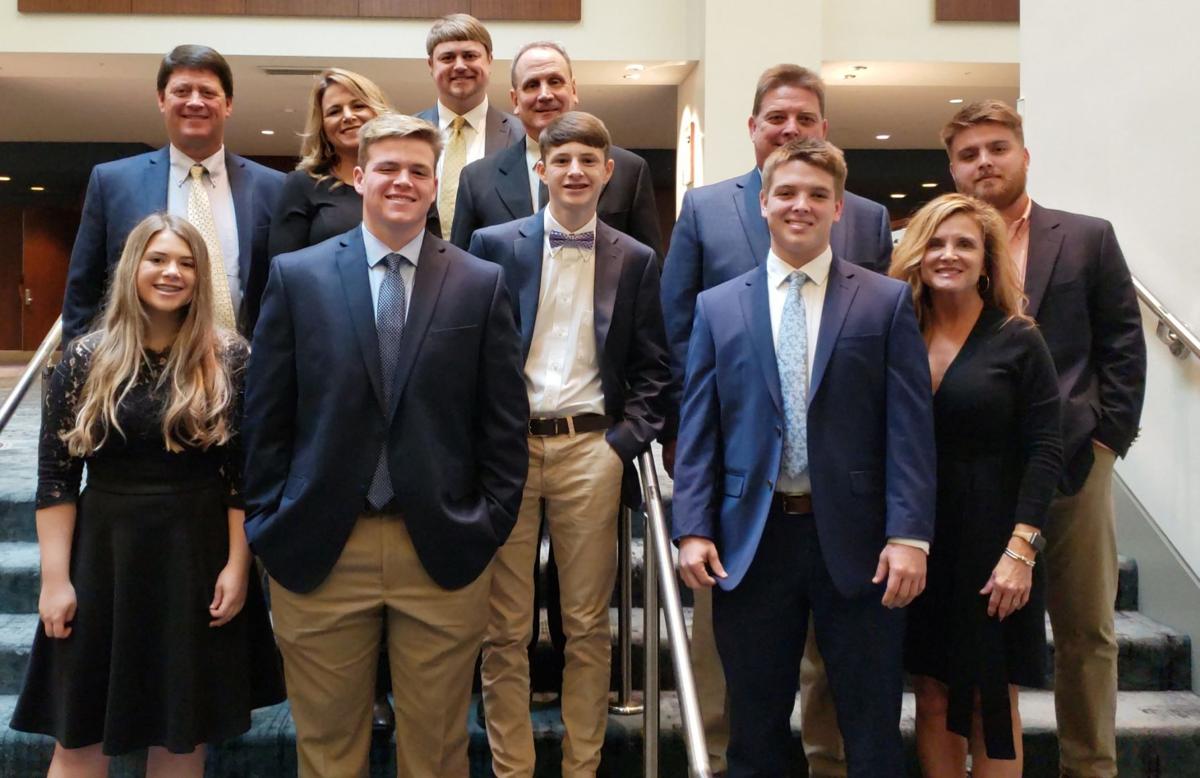 Calhoun County's seven finalists and their supporters at the Alabama Sports Writers Association annual back and lineman of the year banquet.

Class 4A back of the year Rontarius Wiggins, from Jacksonville, and his group at Wednesday's ASWA awards banquet.

MONTGOMERY — There was a time last summer when Rontarius Wiggins seriously considered transferring from Jacksonville to Hoover, seeking more exposure for his special football talents.

As he proudly held the plaque he received as the Alabama Sports Writers Association's Class 4A back of the year Wednesday, he had something to say to players considering exposure-based transfers.

Calhoun County players accounted for seven finalists out of 48 statewide for back- or lineman-of-the-year awards over seven Alabama High School Athletic Association classifications and the Alabama Independent Schools Association.

ASWA members voted for the top backs and linemen in each classification while selecting the association’s all-state team Dec. 13 in Montgomery. Backs include quarterbacks, running backs, wide receivers and defensive backs. Linemen cover offensive and defensive linemen and linebackers.

Seven finalists are believed to constitute a Calhoun County record for the ASWA event. The ASWA doesn’t track finalists, but prep committee co-chairman Josh Bean called seven finalists from one county “a rarity.”

It came after a season that saw a record five teams from Calhoun County reach the semifinals in their classifications. Three semifinal games were played in the county, with Oxford beating Pinson Valley, Jacksonville beating Anniston and Piedmont beating Wellborn.

Oxford went on to win the 6A title, beating Spanish Fort 14-13 for the Yellow Jackets’ first state title in 26 years and first ever in 6A. Piedmont beat Mobile Christian 26-24 in the 3A final for the Bulldogs’ fourth state title and third in five years.

Jacksonville advanced past the second round of the AHSAA playoffs for the first time in program history and lost to nine-time state champion UMS Wright 28-17 in Auburn’s Jordan-Hare Stadium.

Higgins was among the three finalists for 6A back of the year, won by Spanish Fort’s Kris Abrams-Draine. Muscle Shoals’ Jackson Bratton edged Swain and Park Crossing’s Khurtiss Perry for 6A lineman of the year.

In 3A, Hayes (back) and Smith (lineman) were finalists, Smith for the second year in a row. Flomaton’s Daquan Johnson was back of the year, and Mobile Christian’s Deontae Lawson was lineman of the year.

Ohatchee’s Domonique Thomas, The Anniston Star’s Class 1A-3A All-Calhoun County player of the year, was up for 2A back of the year, won by Daleville’s Jalen White.

Kristian Story won the state’s annual “Mr. Football” award after leading Lanett to a 1A state title. Story is an Alabama signee.

“If you’ve got talent, they’re going to find you,” Wiggins said. “It’s not about what school you go to.”

Wiggins, The Star’s 4A-6A county player of the year, took 4A’s top award for backs after rushing for a county-record 2,835 yards and 47 touchdowns, averaging 11.7 yards a carry. He rushed for 5,384 yards and 84 touchdowns in two seasons as Jacksonville’s starting tailback.

“He’s very deserving of it,” Jacksonville coach Clint Smith said. “He’s just an outstanding young man and a great running back and just meant so much to our program over the past few years.

“We’re just excited about where his future is going to take him.”

Wiggins said he has offers from 14 colleges and considers UAB, Troy and Georgia Southern his top choices but remains on a wait-and-see basis.

“My dream offer would be Clemson or LSU,” he said, referring to the two finalists in the College Football Playoff. “Clemson, I like what Coach Dabo (Swinney) does over there, and LSU, it’s like, they all have the same mentality, They’re all hungry. They all want more.”