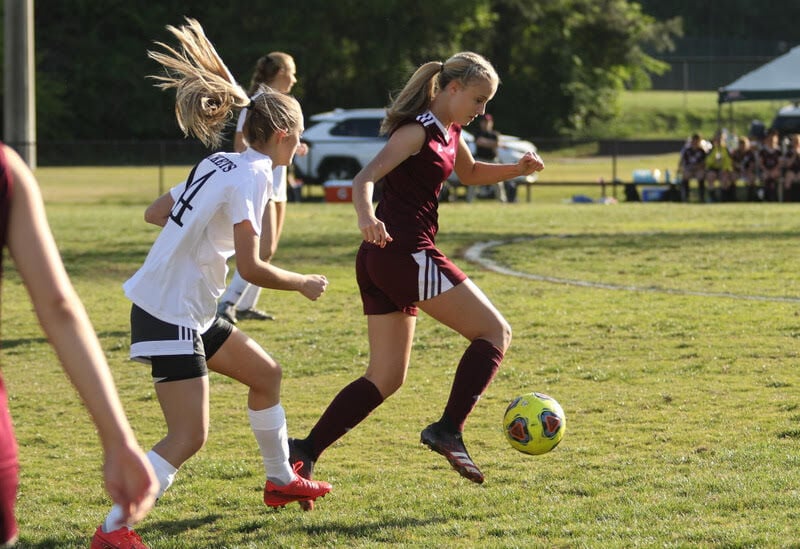 Donoho's Erin Turley breaks away with the ball during the Falcons' 3-1 victory over Glencoe in Monday's first-round playoff action at Donoho. 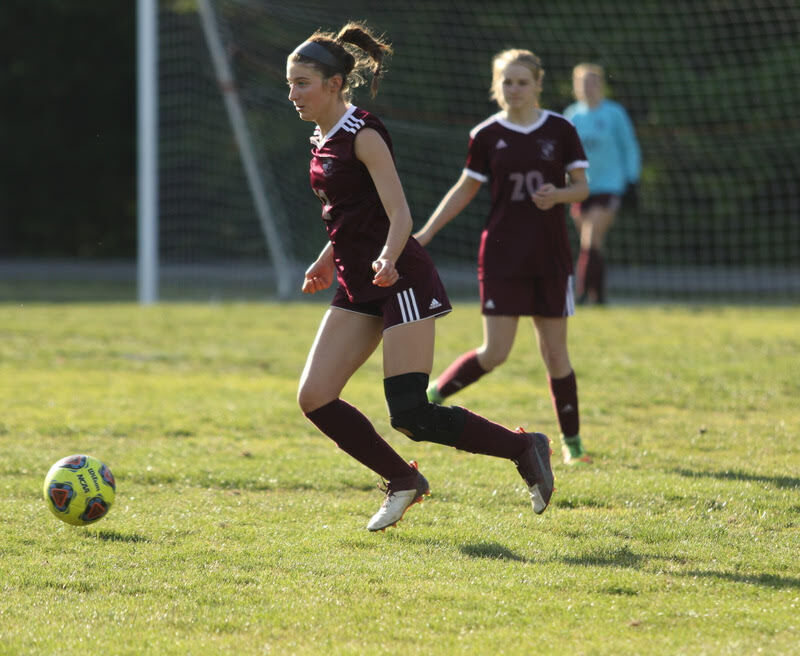 Donoho's Kathleen Seals looks to advance the ball during the Falcons' 3-1 victory over Glencoe in Monday's first-round playoff action at Donoho.

Donoho’s girls have given up five goals all season, so giving up one feels like a kick in the head.

When an accidental-but-actual kick in the head followed and took out one of their best players Monday, the Falcons found extra motivation.

The Falcons (19-0-1) advanced to face Tuesday’s winner between Mars Hill Bible and Danville in the Class 1A-3A quarterfinals, and they’ll do it without junior Kathleen Seals, who will enter concussion protocol. She’s a key player.

“At 60 percent today, she made a difference,” Donoho coach Jay Jenkins said. “She made a big difference. She made them rethink how they were going to play us. They all took a deep breath when they saw her come out on the field in her uniform.

Donoho's Kathleen Seals looks to advance the ball during the Falcons' 3-1 victory over Glencoe in Monday's first-round playoff action at Donoho.

“She’s got a huge left foot. She can cross the ball from the left side, and it’s really hard to find somebody who can do that. She’s super aggressive in scoring, and when we get a lead, she’s the best defender I’ve got.”

That’s why Seals was around the goal for Glencoe’s corner kick at 26:51 of the second half Monday. Meisi Diggs’ corner kick slipped through goalie Maggie Wakefield’s hands and into the goal.

It was a rare miss for Wakefield. In frustration, she kicked the ball, which hit Seals in the back of the head, point blank.

“She just passed out on the ground,” Turley said. “She just had no idea it was coming.”

Seals spent the rest of the match on the bench, with ice on her head. Her teammates took the goal and her latest injury like a kick in the head.

“Kat, she’s been on this team since before me,” said Tosin Sanusi, who scored a first-half goal and assisted Turley’s second goal. “She’s really meaningful, so for her to get out of the game when we’re not expecting her, and we finally got her in, we had to do it for her.”

Wakefield made amends a minute later by stopping Katie Giles’ point-blank shot then pouncing on a Glencoe corner kick.

Turley, the 2019 Anniston Star player of the year for girls soccer, took it from there. She won a ball in the center of the field, kicked ahead then ran it down to boot it past Glencoe keeper Daijah Hammond.

“Their back line, Jay had been telling us the whole time that we had them beat with speed,” Turley said. “Whenever that ball got played through, I just took the chance and took it on my own.”

Turley’s second goal came just inside the one-minute mark. With Glencoe flooding the offensive end, trying to tie the game, she and Sanusi got a 2-on-2 breakaway. Sanusi won the ball, on the left side of the goalie box, then passed to Turley for the finish.

“Tosin has a really good work ethic and desire to win,” Turley said. “You put us together up top, and it’s really pretty.”

Donoho scored a measure of revenge with the victory. Glencoe eliminated the Falcons in a penalty-kick shootout in a 2019 match that saw Turley step in a hole and leave the game with a twisted ankle in the second half.

“Our goal was to give them back what we had lost,” Turley said. “It was really frustrating, losing.”

Susan Moore 3, Donoho 1: Angel Santos scored twice and Jonathan Zavala once as Susan Moore built a 3-0 lead in the first half. Ethan Miles-Jamison scored Donoho’s lone goal on a penalty kick with 9:34 left in the second half.

Donoho had other opportunities in the second half.

“For 30 minutes, we played really well,” Donoho coach Matthew Wright said. “We have plenty of opportunities, but when you miss a penalty kick, we missed an open header, we missed two or three shots right in the middle of the goal.

“The second half, we certainly had the run of play, but you’ve got to score.”

Susan Moore advanced in the 1A-3A bracket and will face Tuesday’s winner between Mars Hill Bible and Tharptown. The Falcons finished their season 12-4-1 and won an area championship.

“It was a great season, first time to win area in 21 years,” said Miles-Jamison, a senior. “I’m really proud of my team, and I wouldn’t want to do it with anybody else.”