Fans fill the home side of Jacksonville High School's gymnasium for Friday's much anticipated matchup with Anniston.

Anniston fans fill the visiting side of Jacksonville High School's gymnasium for Friday's much anticipated game. 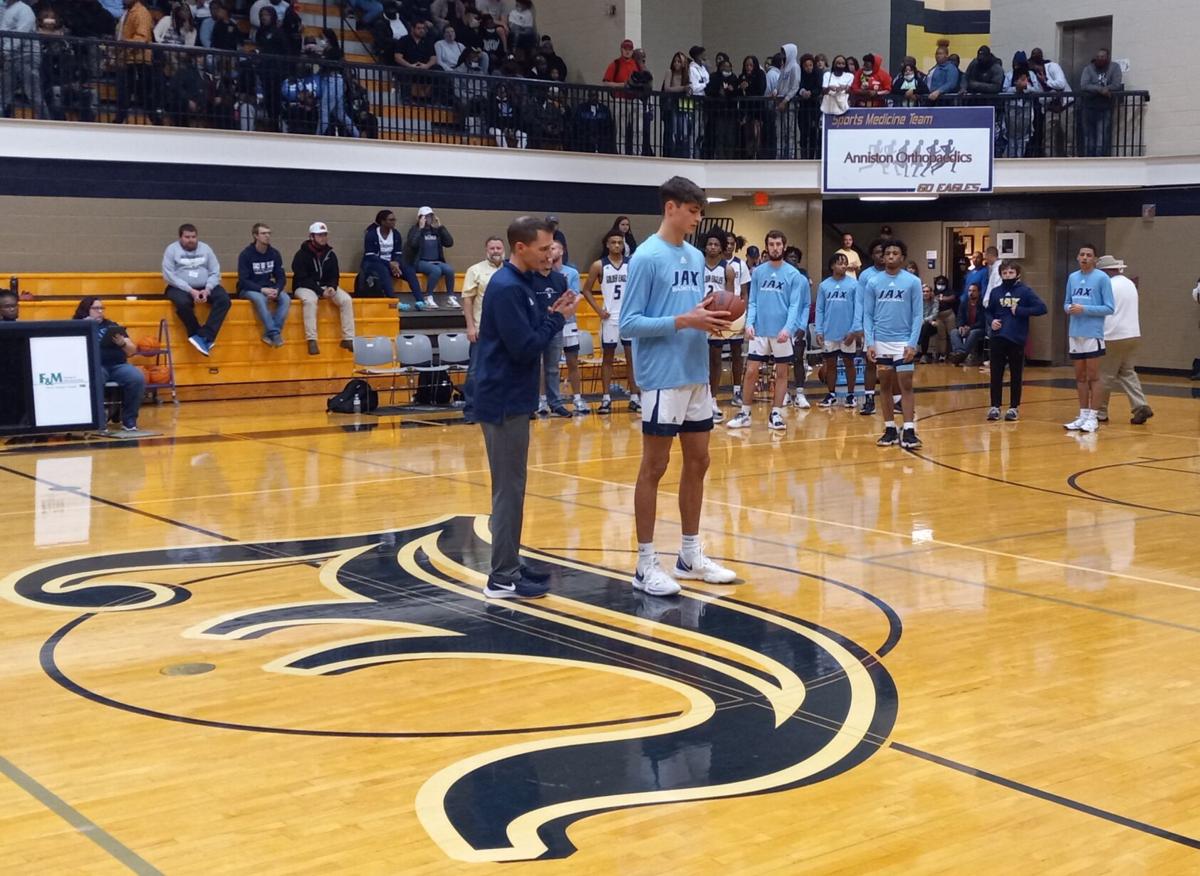 Fans fill the home side of Jacksonville High School's gymnasium for Friday's much anticipated matchup with Anniston.

Anniston fans fill the visiting side of Jacksonville High School's gymnasium for Friday's much anticipated game.

Like, who didn’t see the viral video of Antonio Kite’s acrobatic dunk against Jacksonville in the Calhoun County semifinals?

“They had some highlights on us, and that’s never cool to see you being dunked on all over social media,” Phillips said. “So, we had to repay the favor.”

Phillips’ three dunks and four blocks, one dunk from Camren Johnson and Jacksonville’s 11 3-pointers gave the Golden Eagles lots of highlight material Friday, and they rolled into the county tournament with an 82-44 victory over Anniston at home.

Jacksonville (14-4) enters the county tournament as the top seed and will play the Weaver-Faith Christian winner Tuesday at 4:30 p.m. at Jacksonville State University’s Pete Mathews Coliseum.

Anniston (11-9), the reigning Class 4A state champion, goes in as the third seed and plays the Pleasant Valley-Piedmont winner Monday at 2:30 p.m.

The county tournament opened Friday, but the biggest crowd was found just down the road at Jacksonville High School. The near-full gym included Alabama defensive back “Kool-Aid” McKinstry, one of Kite’s soon-to-be Crimson Tide teammates in football.

Broom led them all with 26 points, hitting four of six 3-point tries.

Phillips, honored before the game for having reached his 1,000th career point earlier this season, added 15 points and 15 rebounds.

Kite, the reigning Alabama Sports Writers Association 4A player of the year in basketball, led Anniston with 11 points. Of greater concern was the tape wrapped around his right (shooting) pinky and ring fingers from 6:50 of the second quarter on.

Kite lunged to tip a pass the left the game, holding his hand. Anniston coach Torry Brown said Kite’s finger was not broken.

Jacksonville led 19-17 when the injury occurred. The Golden Eagles led 30-19 when he returned to action.

It was the latest turn in a season that’s seen Anniston miss key players like Mark Toyer because of injuries and illness. The Bulldogs have missed as many as four players in some games.

“They were really good, and we were really bad,” Brown said. “That’s what it is, unfortunately. We picked a bad night to not play our best game.”

Jacksonville gained more separation after Kite returned. By the time he scored Anniston’s first second-half bucket, on a drive at 4:24 of the third quarter, Jacksonville led 45-23.

The margin led to scenes unthinkable headed into what was considered a must-see matchup … a running clock in the fourth quarter, and Jacksonville coach Shane Morrow having to call timeout at 1:37 to empty his bench.

He called the timeout after an assistant pointed out the margin.

“I knew we had a lead, but I didn’t realize what it was,” Morrow said. “He said, ‘You might want to think about starting to get those guys out.”

After the postgame handshake, Jacksonville players rushed across the court to the full student section to celebrate.

“It was great,” Broom said. “Jacksonville is a great city, when it comes to students. Our student section is probably the best in this county and one of the best in the state, in my opinion.”

They celebrated the fourth-ranked team in 4A having just routed the reigning 4A champion, a team that beat the Golden Eagles in the county semifinals and eliminated them in the subregional round last year.

“From what I’ve heard, they left a pretty rough taste in everybody’s mouth last year,” Phillips said. “Two close games, so I felt like it was right that we kind of had to just lay it on them and make up for what they did to us last year.”

Anniston 31, Jacksonville 19: Anniston held Jacksonville scoreless in the fourth quarter, turning a 22-19 game into a more comfortable victory in a game that saw no one score in double figures.

Struggles on offense stood out more to Anniston coach Eddie Bullock than shutout defense in the fourth quarter.

“We were one of five from the 3-point line, and we’re still jacking threes,” he said. “I’m telling them, ‘Be smart and penetrate with the basketball.’”

Jacksonville coach Tres Buzan took encouragement from the fact that Jacksonville entered the fourth quarter within three points of Anniston.

“Early on, we missed way too many layups,” he said. “We were just so amped up. Our nerves were so high. Simple shots we make on a daily basis, we were missing them.

“But overall, I was proud of how we competed. It’s a three-point game with a few minutes left. We’re right there.”