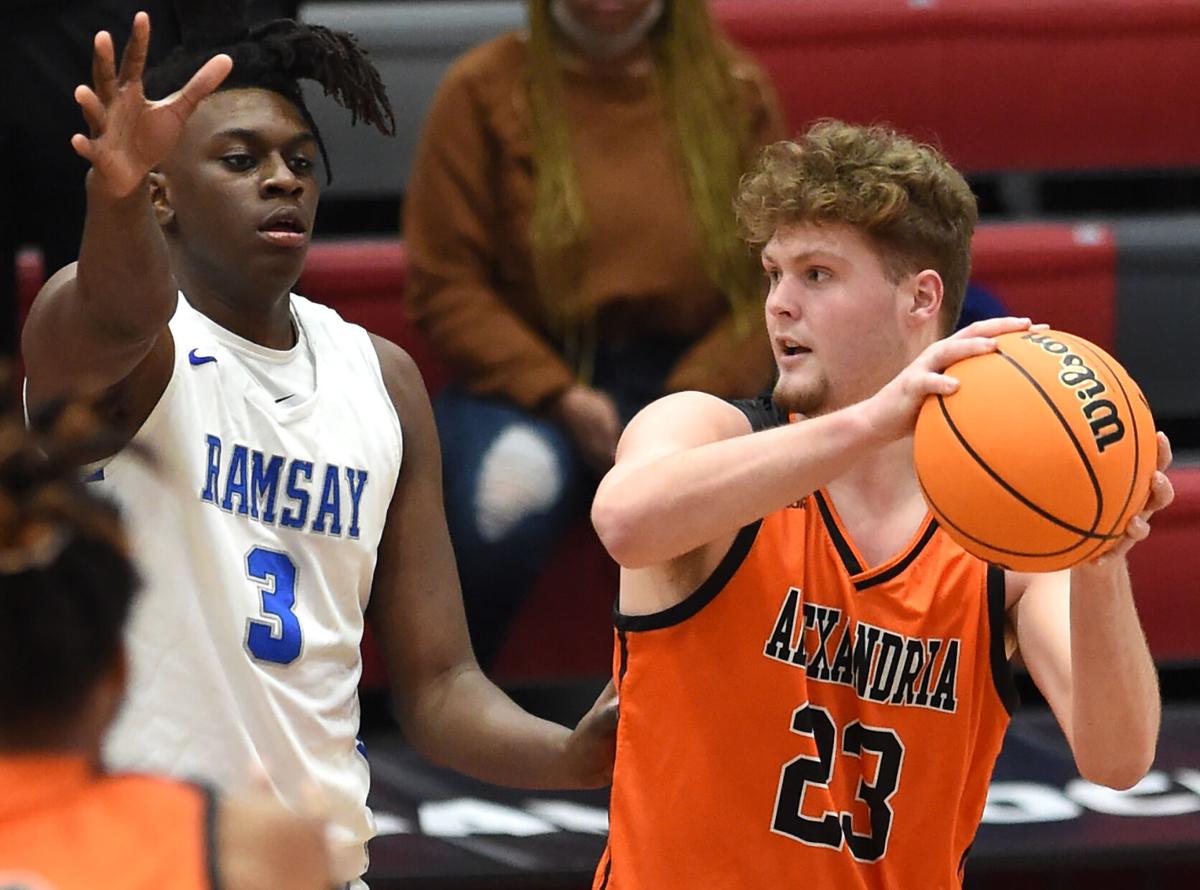 Alexandria's Landan Williams works against the defense of Ramsay's KeShawn Murphy during the AHSAA Class 5A Northeast Regional final at the Pete Mathews Coliseum in Jacksonville, Ala., Monday, Feb. 22, 2021. (Mark Almond | preps@al.com) 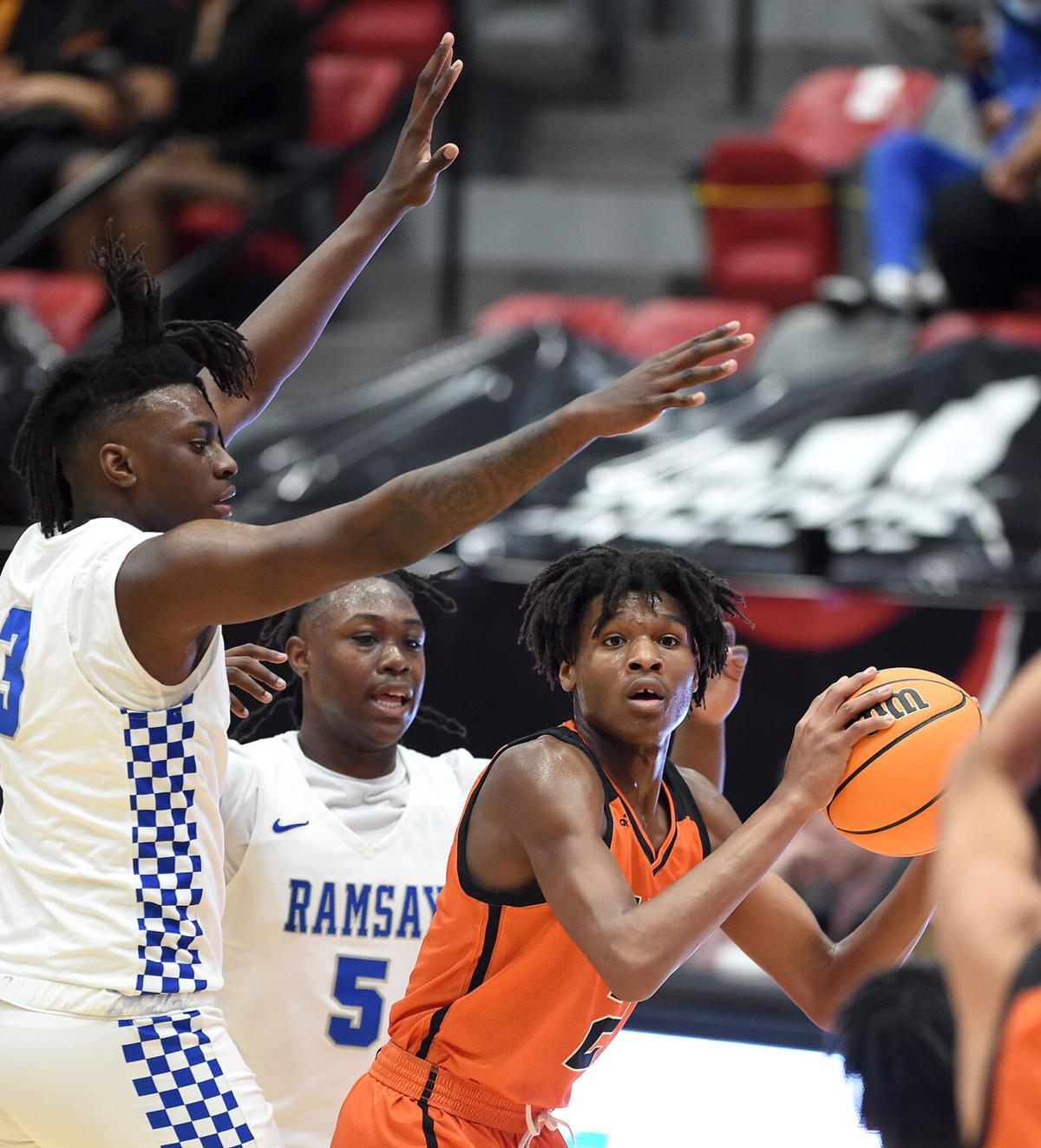 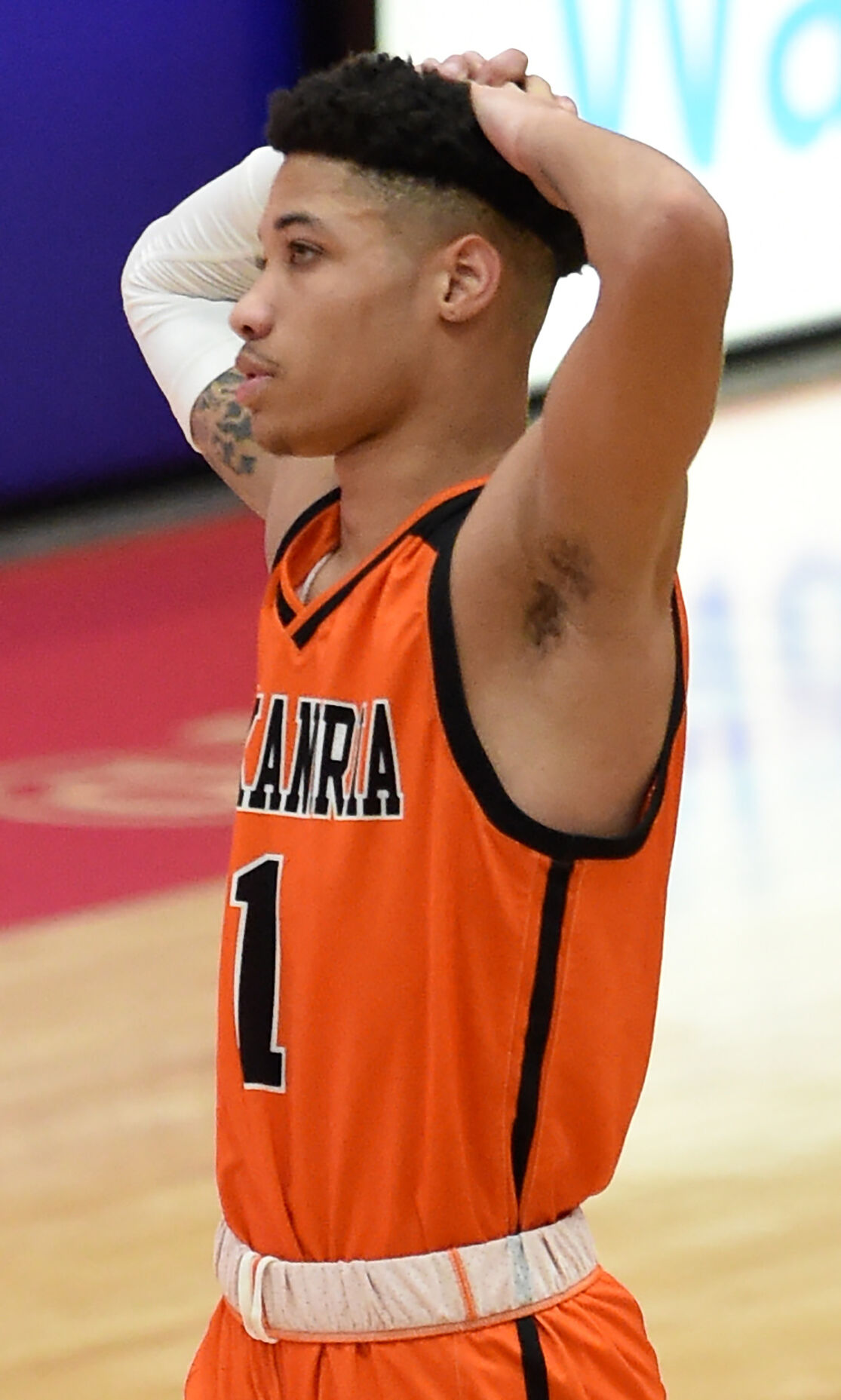 Alexandria's Javais McGhee reacts to the loss to Ramsay late in the AHSAA Class 5A Northeast Regional final at the Pete Mathews Coliseum in Jacksonville, Ala., Monday, Feb. 22, 2021. (Mark Almond | preps@al.com) 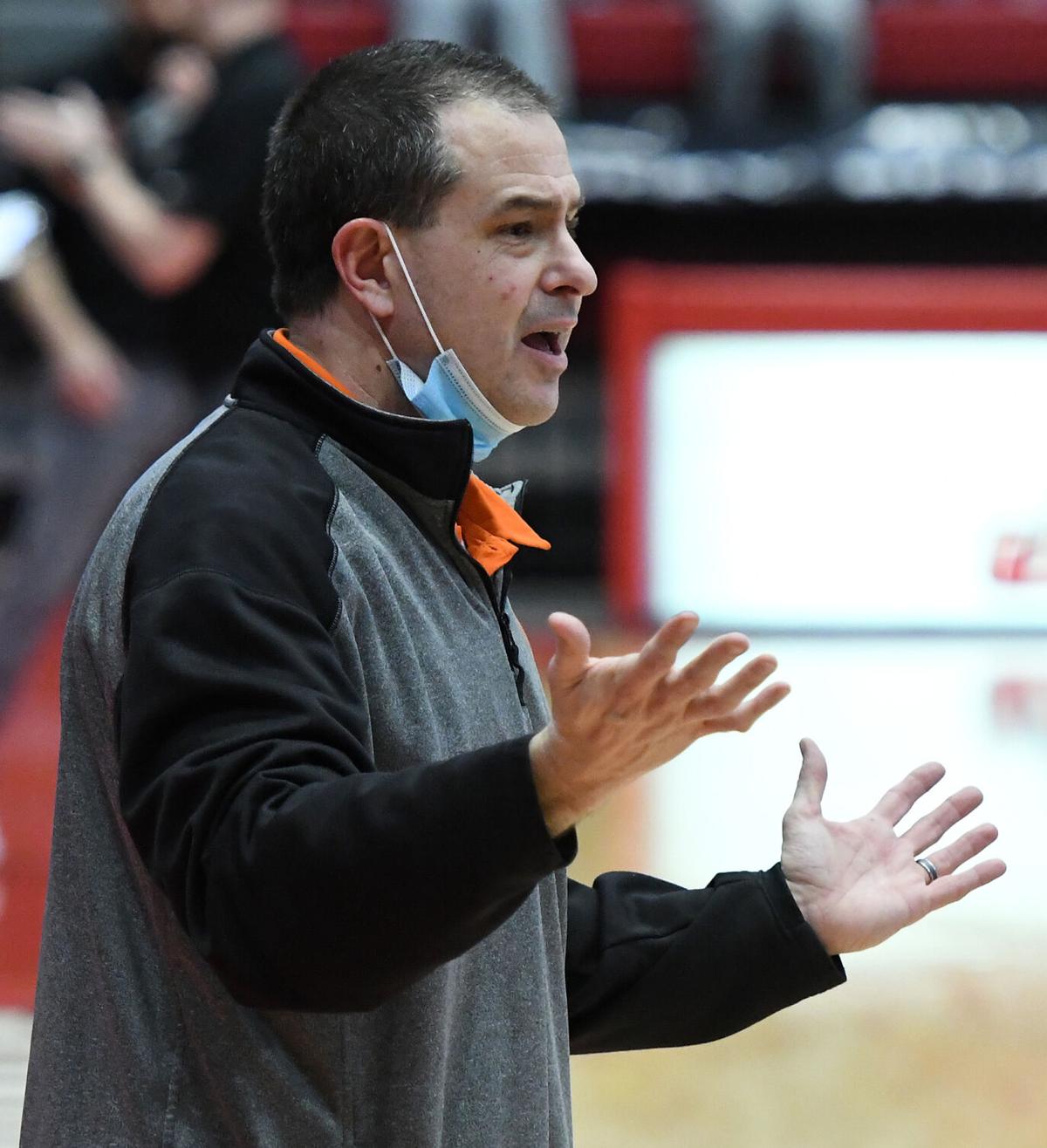 Alexandria's Landan Williams works against the defense of Ramsay's KeShawn Murphy during the AHSAA Class 5A Northeast Regional final at the Pete Mathews Coliseum in Jacksonville, Ala., Monday, Feb. 22, 2021. (Mark Almond | preps@al.com)

Alexandria's Javais McGhee reacts to the loss to Ramsay late in the AHSAA Class 5A Northeast Regional final at the Pete Mathews Coliseum in Jacksonville, Ala., Monday, Feb. 22, 2021. (Mark Almond | preps@al.com)

JACKSONVILLE — Trophy presentations lack something in the COVID-19-stripped Northeast Regional. No team rush to the table. No hoist and holler.

To avoid bunching people together, the coach takes a lonely walk out to midcourt, grabs the prize and hands it to somebody.

Alexandria coach Jason Johnson held the Class 5A runner-up trophy out to his lone senior Monday, after the Valley Cubs’ 69-58 loss to Ramsay in Pete Mathews Coliseum. A dejected Landan Williams didn’t look up at first.

After mild coaxing from Johnson, Williams accepted the plaque he didn’t want, then dropped his head again.

“I’ve got nothing,” the soft-spoken Williams said later, in response to a reporter’s unrelated question in the postgame news conference.

It might as well have been the answer for all questions. It sure felt like the appropriate sentiment.

Ramsay (26-7), 5A’s top-ranked team in the Alabama Sports Writers Association poll, advanced to its third Final Four in as many years. The Rams will face Sipsey Valley in Saturday’s 4:30 p.m. state semifinal in Birmingham.

Alexandria’s strong run since the Calhoun County tournament ended in mid-January ended at eight wins in 10 games, including a dramatic sub-regional victory over Parker on D’Anthony Walton’s buzzer-beating 3-pointer.

“We had a great run, right at the end,” Walton said. “We got it together at the end of the season.”

The run ran into a Ramsay team that ran 10 players in and out of the game, none playing more than 25 minutes. Alexandria dresses seven, and three played 30-or-more minutes.

“That was the whole game plan,” Ramsay coach Denton Johnson said. “Beat them by numbers. Wear them out in the fourth quarter, and not only seven. The other two only play two or three minutes here or there.”

The run ran into Mississippi State signee Keshawn Murphy, a 6-foot-11 enigma whose touch on 3-pointers and fallaway jumpers belies his sense that “people have doubted me my whole life.” The player who dunked a goal off of its ceiling mounting at Carver-Birmingham this season scored 15 points Monday. Two points came when he dunked home Jalen Jones’ backboard pass for a 46-36 lead at 3:47 of the third quarter.

Did we mention that he has more than 100 assists this season?

Alexandria’s run ran into an unfortunately short run for Walton on Monday. He fouled out with 7:24 left in the fourth quarter, foul troubles having shortened the hero of Alexandria’s postseason run to 24 minutes and seven points.

“That’s going to be the turning point in the game,” said Johnson, who vehemently argued that Walton merely raised his arms on Preston Davis Jr.’s drive. “We haven’t seen the film, or anything, but that was a tough call.”

Alexandria’s run ran into a team that made it hard for Alexandria to make runs. The Valley Cubs tried. They stayed close most of the way. They answered so many of Ramsay’s jabs and punches but never led.

“They did a good job of keeping us at arm’s length,” Johnson said. “It seemed like we were always 10 points down, eight points down.

“We made a couple of little runs there in the first half. We just could never get over the hump.”

Alexandria got 18 points apiece from Williams and Collin Taylor. The 6-foot-6 Williams got his despite a rare game where he’s not the tallest player on the court. Taylor got his from distance, hitting four of 11 3-point attempts.

They tried. It’s just hard to overcome 17 turnovers when Ramsay had 17 assists.

But that was the story of the end of Alexandria’s run.

The run, which started after the seventh-seeded Valley Cubs played Oxford to a 47-42 thriller in the Calhoun County quarterfinals, owed to many factors. Johnson saw more of a late start than a late-season run.

COVID-19 limited what Alexandria could do in the offseason, a tough fact of life for a depth-poor team. The football team made its deepest playoff run in five years, delaying basketball for players who play both sports.

The potential was always there, especially with a starting five that Ramsay coach Johnson called “as good a five as we’ve seen.”

“There are teams that beat us early in the year that, if they were to have to play Ramsay, they may get beat by 70 or 80,” Alexandria coach Johnson said. “We were struggling at the beginning of the year.

“We kept telling them, it’s going to be OK. It’s how you finish.”