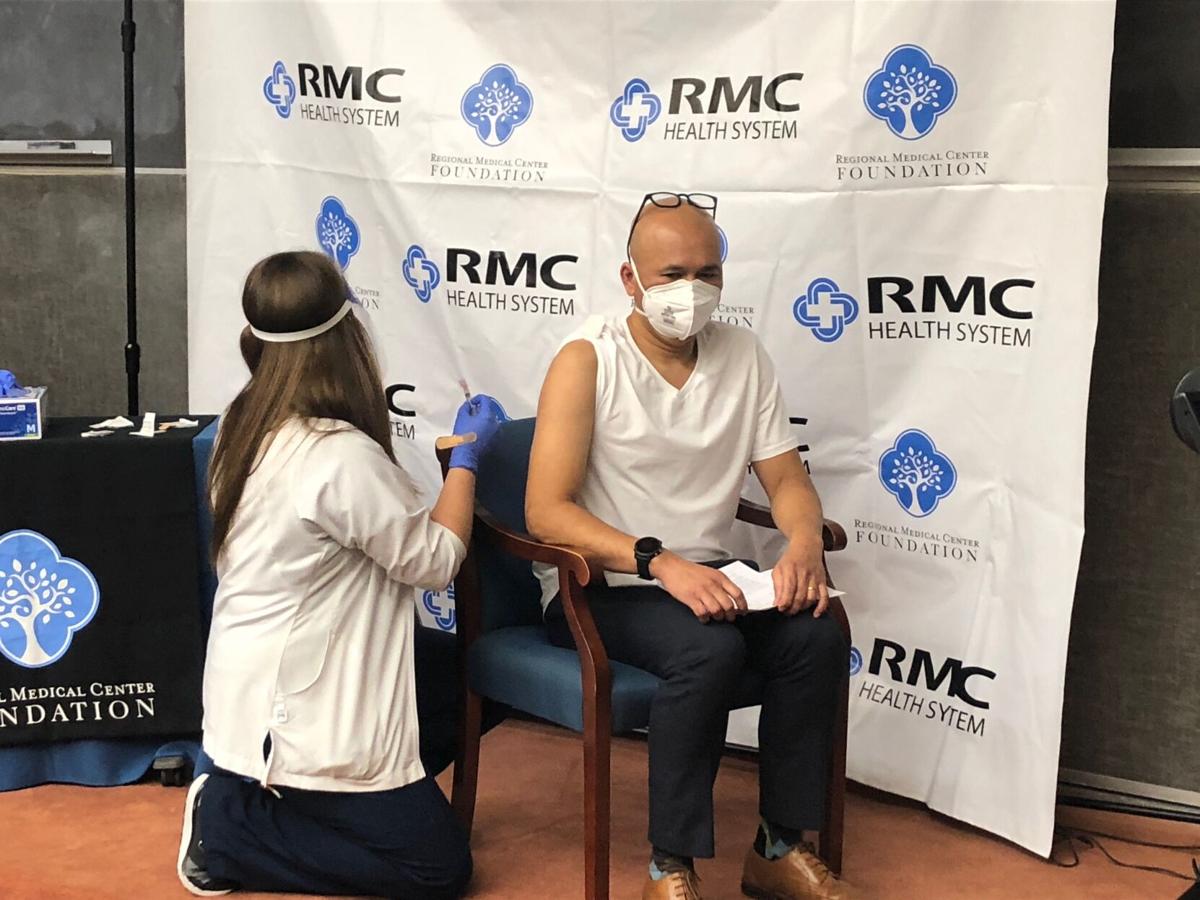 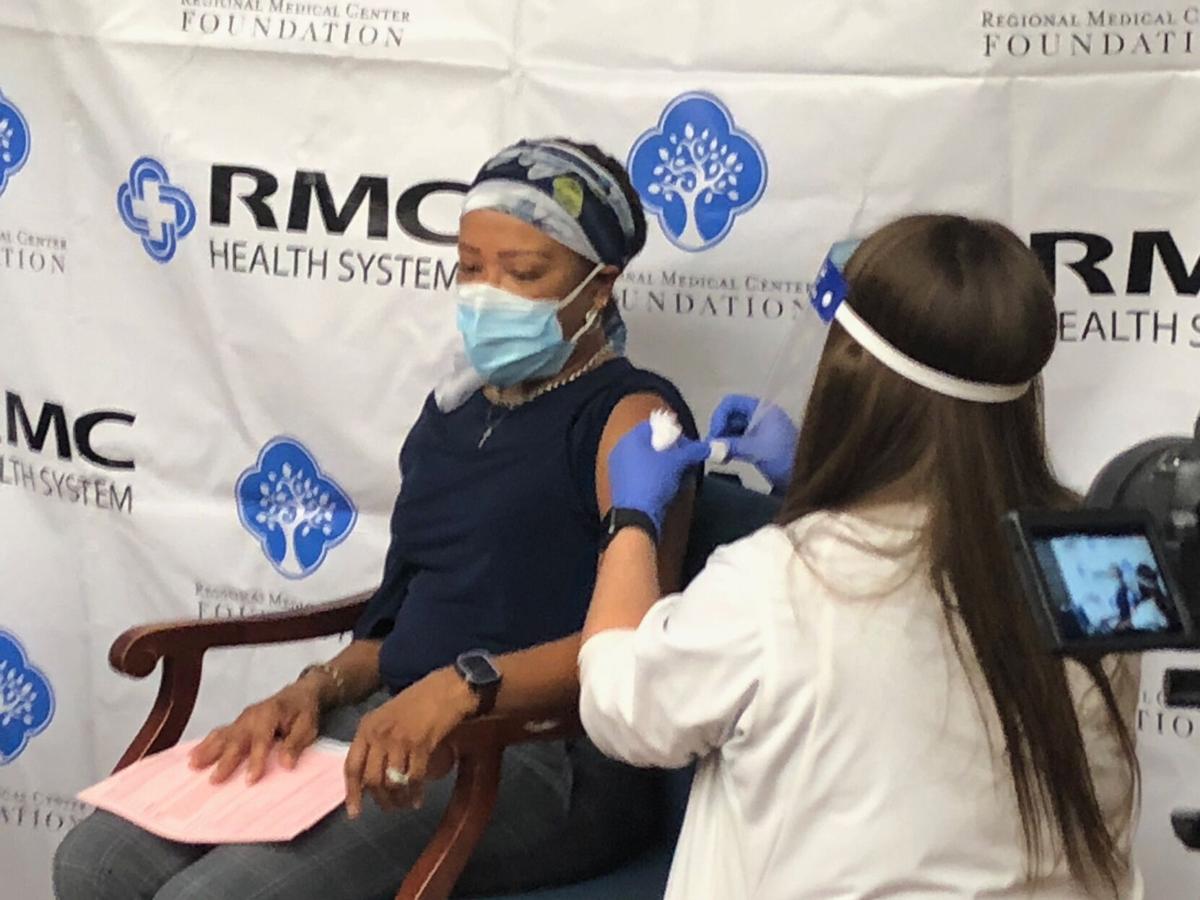 Dr. Mimi Free receives one of the first COVID vaccinations in Calhoun County on Wednesday afternoon at Regional Medical Center in Anniston.

An infectious disease specialist at Regional Medical Center received Calhoun County’s first vaccination against COVID-19 Wednesday — one of 10 medical workers to get shots from the area’s first vial of the Moderna vaccine.

“Hopefully this is the beginning of the end of the pandemic,” said Dr. Raul Magadia, the physician who received the first shot at the hospital Wednesday.

Doctors were guardedly optimistic about the arrival at RMC this week of the first 2,900 doses of the vaccine. Those doses are enough to begin vaccination of most of the hospital’s workers by the end of the year, but not nearly enough to immunize a majority of the county’s more than 100,000 residents.

With the virus surging across the county —  the death toll in the county rose to 145 Wednesday morning — doctors were quick to note that hand sanitizer and masks remain the best weapons local people have against the pandemic.

If Magadia’s shot was a milestone, it was as low-key as a milestone can be. Several RMC employees, many of them also in line to get the shot, gathered in an auditorium on the hospital’s ground floor. Magadia stripped down to a T-shirt, answered some questions about his reactions to past vaccines, and got a jab in the arm.

The hospital around Magadia was eerily quiet, as it has often been since the pandemic began. RMC earlier this month limited non-essential surgeries, ended visitation and began warning ambulances to take patients elsewhere, as the post-Thanksgiving surge in COVID cases began to strain the hospital’s intensive-care capabilities.

Magadia said Wednesday that 60 COVID patients were under care at the hospital, with four in the emergency room awaiting space on the hospital’s coronavirus wards. Hospital officials have said staffing, not beds or building space, is the main obstacle to expanding their COVID wards.

Hospital officials expect to begin large-scale vaccination of medical workers on Monday at RMC, with shots for some first responders to come in the first week of January at Anniston City Meeting Center.

Kandi Williams, infection control specialist for the hospital, said some medical workers unaffiliated with the hospital will also get top priority: doctors, nurses and nurses’ aides over age 65, and those who work in urgent care clinics. Williams said the rules prioritizing those medical workers came down from state officials just Wednesday morning.

Each vial of the vaccine includes enough vaccine for 10 doses, which is why Wednesday’s event included 10 vaccinations, Williams said.

Magadia said police officers and other essential workers — probably including teachers — will be next in line after first responders with medical roles.

School nurses, he said, will likely get the vaccine when teachers do. He cautioned that it could be several months before the average, healthy adult gets a shot in the arm.

“I think realistically, we’re going to be doing this rollout of vaccinations through summer,” Magadia said.

Health officials have long said that supply of vaccines will be the main limiting factor in the effort to vaccinate everyone. Magadia noted that Moderna expects to have 1.5 billion doses available for the entire planet by the end of 2021. That’s well short of the global population, and the vaccine requires two shots to be fully effective.

Magadia said Pfizer expects to have 20 million doses of its vaccine available by the end of this year. Calhoun Countians aren’t likely to get that vaccine because it requires super-cooled storage that RMC can’t provide.

The Alabama Department of Public Health on Wednesday reported a severe allergic reaction to the Pfizer vaccine in a single Decatur-area resident on Monday. That patient is stable and hospitalized, an ADPH press release said. By Wednesday morning, 15,286 doses of the Pfizer vaccine had been administered in Alabama.

Magadia said he had spent much of the past week reading up on the vaccine and didn’t feel worried about the shot or its side effects. He noted that the Moderna shot was tested on roughly 30,000 people before it was approved.

“Systemic reactions include fatigue and headache,” he said. “That’s more common after the second dose.”

Dr. Almena Free, another physician who works closely with RMC’s COVID patients, was next in line behind Magadia to receive the shot. Asked if she was concerned about having side effects over the holiday, she said no.

“I’m excited. I’ve been looking forward to this,” she said.

It’s still unclear whether vaccinations for the virus will become a regular event, akin to annual flu shots. Magadia said immunity among people who’ve had the virus tends to wane in 10 to 12 weeks. He said it’s too early to tell whether the COVID vaccine will require a booster.

Health officials in recent days have expressed concern about a new strain of the virus that emerged in the United Kingdom, one that is believed to be more contagious than the viruses now circulating in America.

Magadia said the evidence suggests the vaccine will be effective against that strain of the virus as well.

From an early warning in February to the first local vaccine in December, a look back at the pivotal events that captured the spirit of Calhoun County in the age of coronavirus.