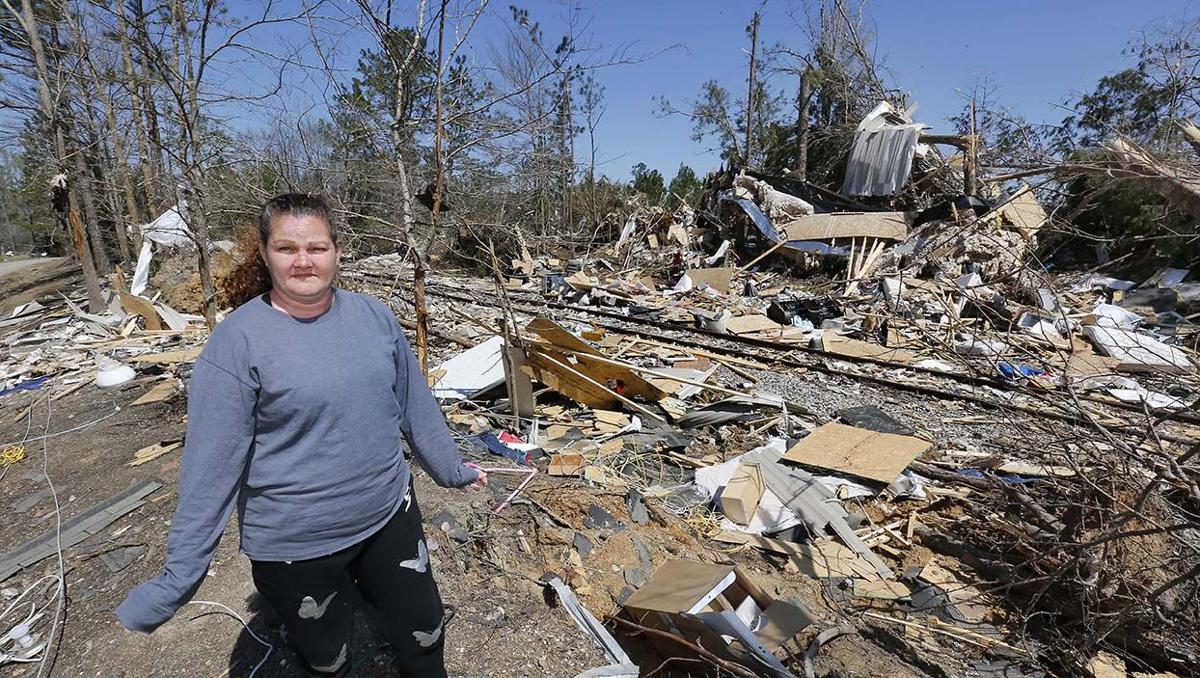 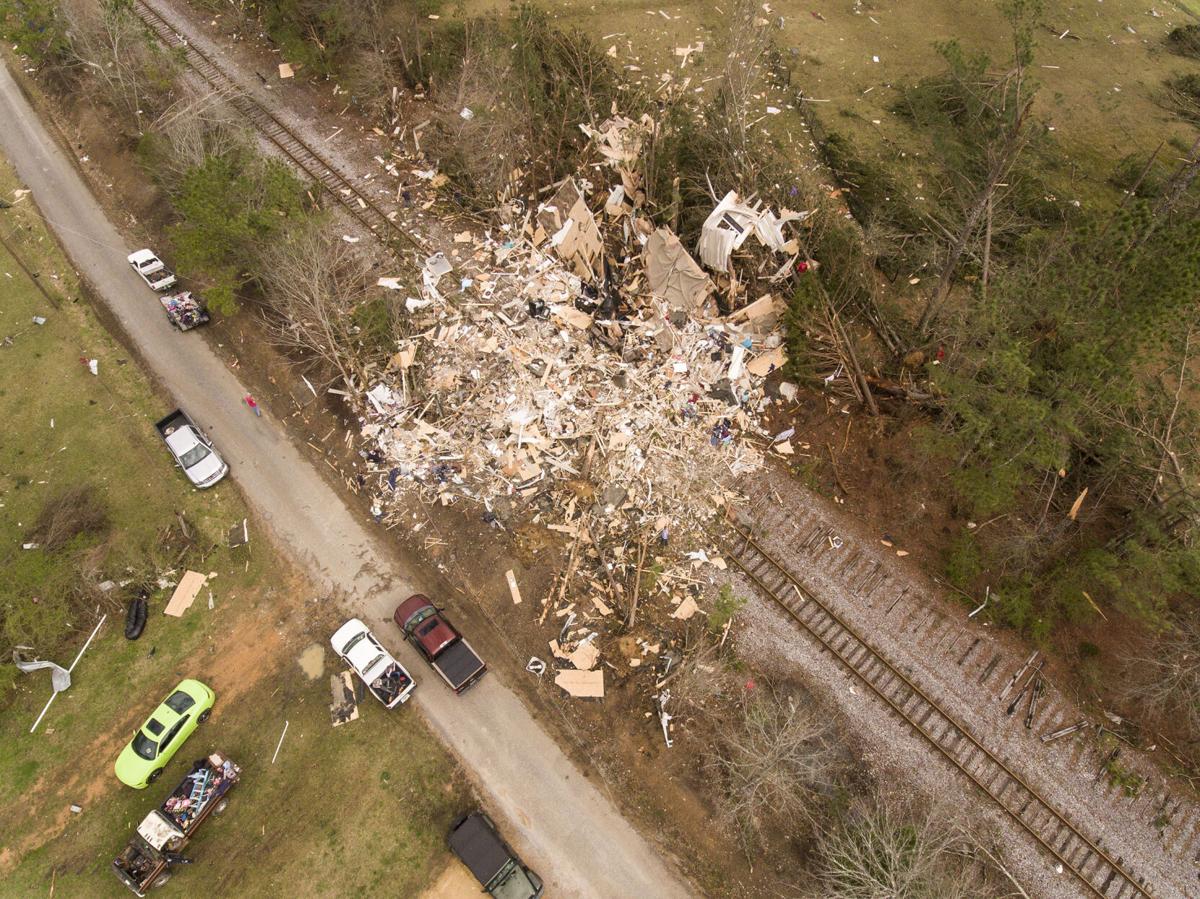 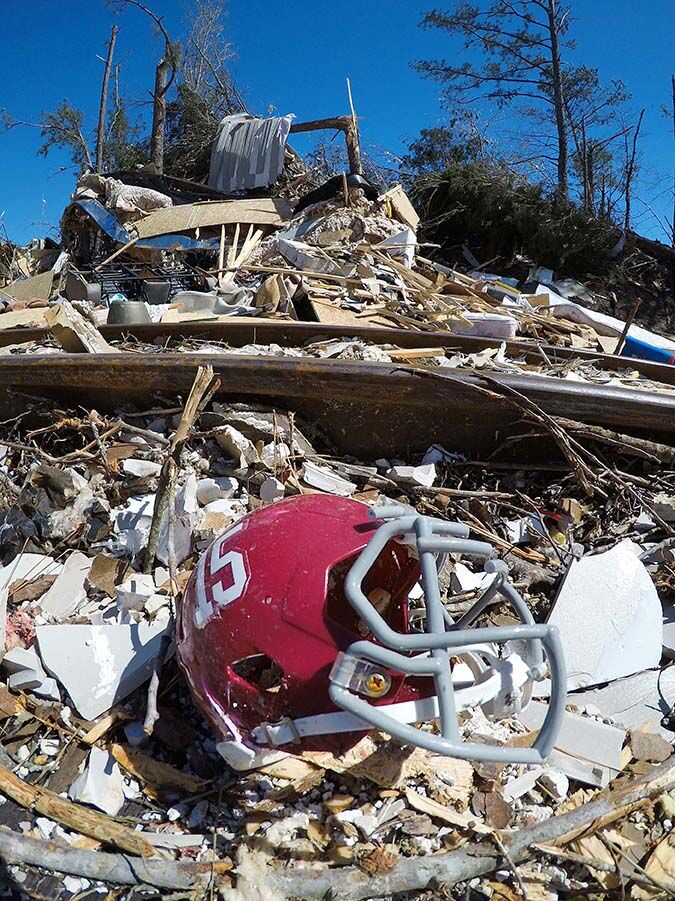 A double wide mobile home was totally destroyed on Joe Martin Drive in Wellington during a tornado that passed through the area March 25. 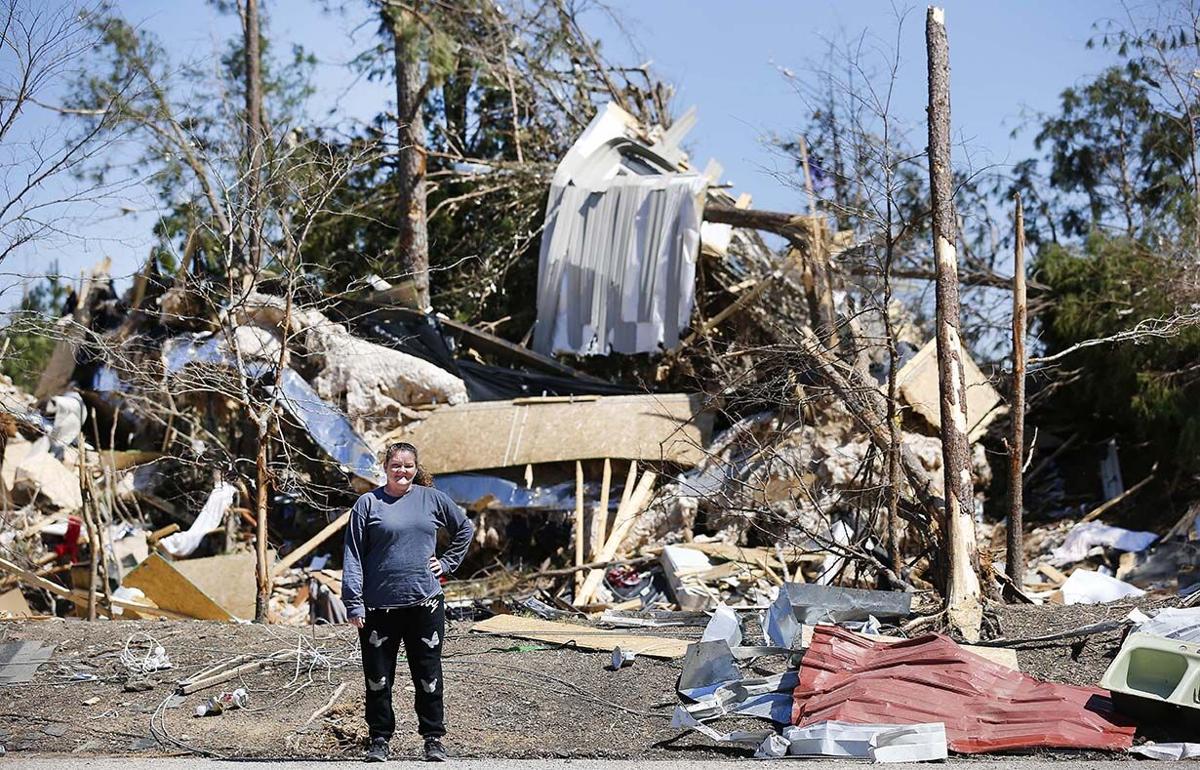 There is a randomness in tornadoes that heightens the fear: where they’ll land, whom they’ll kill, when they’ll strike. But David Roueche nonetheless expects a certain specificity to them, or at least to the damage they cause to the buildings they destroy.

Roueche, an assistant professor of structural engineering at Auburn University, is renowned for his research of storm winds’ effect on man-made structures. If a building — a home, a school, an office, a church — disintegrates during a tornado, Roueche wants it to fragment in an organized, almost preplanned manner.

He calls it a “top-down” failure.

“You want the ‘anchorage’ to be the strongest — the roof to fail first, then the walls, then the ‘anchorage,’” he said. “But with manufactured homes, we have the opposite. They almost always fail from the bottom up.”

Tornado season in the South always relitigates a decades-long argument about the safety limitations of the manufactured housing prevalent in Alabama and its sister states. Despite improvements in manufacturing and installation techniques, mobile homes remain one of the worst places in which to shelter from a tornado, experts say, regardless of its wind speeds.

The tornado that ripped a 38-mile path through Ohatchee, Wellington and other parts of rural Calhoun County last month followed a familiar script. Despite ubiquitous warnings from the National Weather Service and the Calhoun County Emergency Management Agency, the tornado still killed five people, including two in mobile homes.

‘You’re getting tossed around inside the home, the home is falling apart about you, you’re flying through the air. There’s just very little chance of survival. That’s what we see time and time again.’

Embedded in this debate are discussions of poverty, politics, public opinion and legislative lobbying that have changed little from one century to the next. By definition, mobile homes’ price points make them readily obtainable by low-income Americans. That same definition — how they’re made and installed — creates an inequity in the safety provided to homeowners. Brick-and-mortar trumps manufactured.

In 2004, Auburn University history professor Wayne Flynt, writing in “Alabama in the Twentieth Century,” detailed how Alabama’s rural and low-income communities became figurative farms of manufactured houses. By 2000, Flynt wrote, 1 in 6 Alabamians lived in mobile homes. Beginning in 1950, the state experienced dramatic increases in mobile-home sales; “as many residents purchased factory-bought homes as they did traditional ones during the 1990s,” he wrote. The state Legislature only offered bare-bones regulatory oversight.

And yet, “on the positive side,” Flynt wrote, “inexpensive mobile homes turned more Alabamians into owners than was the case nationally.”

Today, 6 percent of Americans live in manufactured housing, according to the U.S. Census Bureau, most of it clustered in the South and West. Alabama’s percentage (13) is more than twice that figure, putting it annually among the top five states for mobile-home residents.

Calhoun County’s percentage (15) is slightly higher. Inside the county, the figures wildly vary, from 37 percent in Ohatchee to 12 percent in Oxford to just 2 percent in Anniston. Ordinances that allow new mobile homes only in designated parks exist in most of the county’s cities, with grandfathered allowances for those already in place but outside of designated locations.

The Calhoun County EMA takes no official stance on the safety of manufactured housing. Its role, said interim director Myles Chamblee, is to advise beforehand and react afterwards, not to advocate for or against certain industries.

“For us,” Chamblee said, “our statement for pretty much all the public would be to make sure you know where your safe place is in your home, and if you’re not in substantial housing, know where the safe places are.”

The county EMA website lists 11 Federal Emergency Management Agency-rated “safe room” storm shelters and five “safer places” on its website, some of which have been built with federal grant money allocated after the tornadoes of 2011 and 2018.

The storm-related data, though, strengthen the often-retold belief that manufactured housing provides scant protection against even the weakest of tornadoes.

The probability of a tornado fatality in mobile homes is estimated to be 10-15 times higher than in permanent homes, according to a 2010 study published by professors Daniel Sutter of Troy University and Kevin M. Simmons of Austin (Texas) College.

Deaths from the strongest tornadoes, the EF5s, dropped 91 percent during the 20th century due to a host of scientific and construction factors.

The prevalence of mobile-home deaths from tornadoes, however, did not follow the trend.

Roueche, the Auburn University engineering professor, agrees that mobile-home manufacturers have improved their products’ quality in recent years. “A lot of the boxes are built pretty well,” he said. But installation and regulatory oversight issues continue to hamper the homes’ ability to protect residents from storms.

Case in point: the aforementioned “anchorage” — the systems used to hold homes to the ground. The Alabama Manufactured Housing Commission requires that all mobile-home installers be licensed through its Montgomery office and offers periodic training sessions for new installers, plus continuing education updates every two years.

Nevertheless, Roueche and other researchers fault either improper anchorage installation or lax oversight for the lack of “top-down” failure of mobile homes.

“You end up with this situation where almost invariably the anchorage is the weakest part of the load path, which from the structural and safety perspective is the absolute worst thing that you can do,” Roueche said.

“We have data showing that with a lot of these homes, the anchor is failing before the tornado even gets there. They’re getting sort of pulled into the tornado because of how weak the anchorage is. And at that point, you have very little chance of survival. You’re getting tossed around inside the home, the home is falling apart about you, you’re flying through the air. There’s just very little chance of survival. That’s what we see time and time again. We’ve got to fix the anchorage.”

The Manufactured Housing Institute, a national trade organization in Arlington, Va., offers an industrial portrait far different than the industry’s safety critics. “Properly installed manufactured homes are as safe as traditional homes during a storm, and in hurricane zones, the standards for manufactured homes are more stringent than regional and national building codes for site-built homes,” the institute writes on its website.

The industry, the MHI writes, follows guidelines of the Housing and Urban Development’s wind load zone map that regulates manufacturing processes for homes depending on which part of the United States they are installed. HUD strengthened its guidelines after Hurricane Andrew in 1994.

Zone 1 covers most of the United States. Zones 2 and 3 cover slivers of the coast lines, including Alabama’s coastal areas. Zone 1 homes are built to withstand far lower wind speeds than homes designed for Zones 2 or 3.

Therein, however, lies another problem, researchers say. “The main issue is that in Zone 1, the requirements are so low that an EF1 and EF0 is just going to damage or destroy it,” Roueche said. “They’re using design standards that were in place 40 years ago and they haven't changed since then.”

On its website, the MHI touts that because of the 1994 HUD regulation changes, “not one manufactured home built and installed after 1994 was destroyed by hurricane force winds” in Florida’s hurricanes in 2004.

But Roueche and other researchers would welcome a strengthening of Zone 1 requirements, which would offer increased protection to residents of manufactured homes in most of Alabama. The industry, Roueche said, has been resistant to those efforts. Strengthened manufacturing regulations would likely increase costs and could price some low-income Alabamians out of the mobile-home market.

“You could make these super cheap and not anchor them at all, but you’ve got to draw the line somewhere,” Roueche said. “Right now, that line should be life safety, and these are, quite frankly, terrible at providing any sort of life safety in an above-design event.”

In Jacksonville, hit hard by a tornado three years ago, Mayor Johnny Smith isn’t oblivious to the root issue: cost-wise, manufactured homes match up with many Alabamians’ incomes, and storm safety is a paramount concern in the state’s tornado-prone regions.

“You want these folks to have a place to live, you don’t want them on the street; it’s just a tough issue,” he said. “I wish we could be rid of all of them and have all those people be in a nice home somewhere, but that’s just the reality. There is a need for them.”