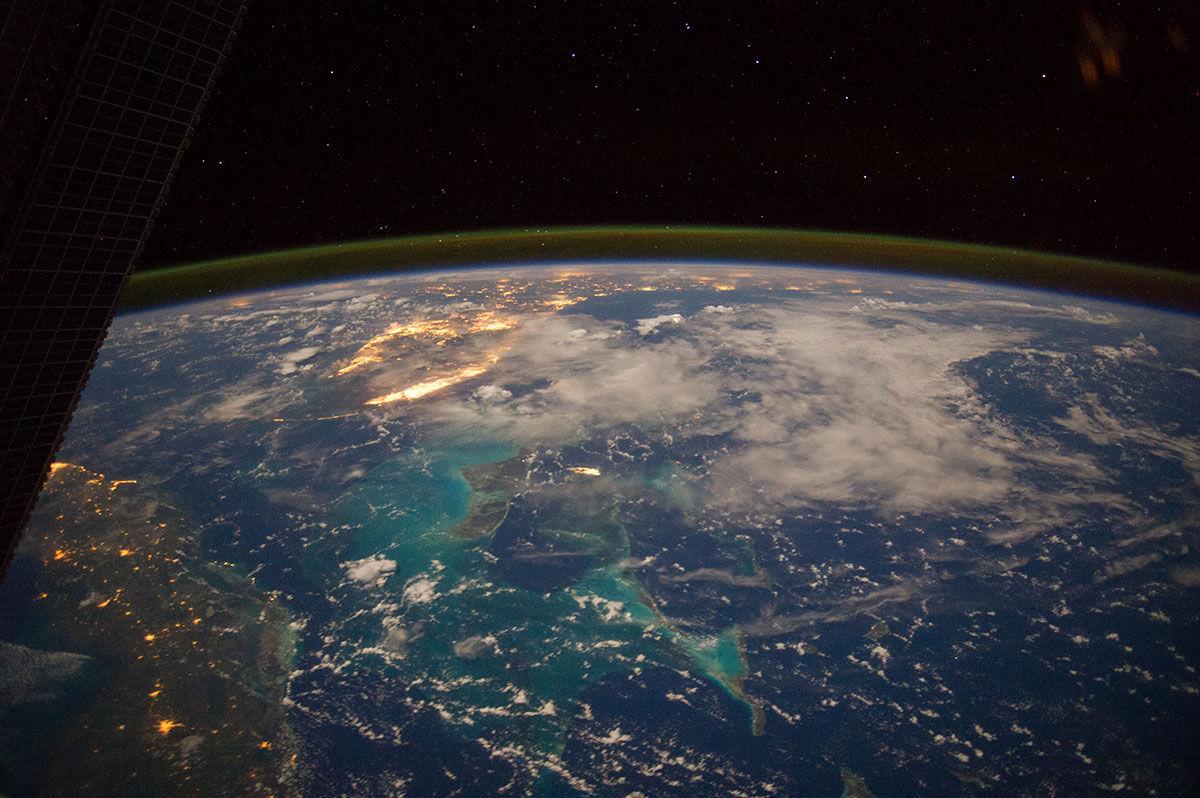 From the Earth-orbiting International Space Station, flying some 225 nautical miles above the Caribbean Sea in the early morning hours of July 15, NASA astronaut Reid Wiseman photographed this north-looking panorama that includes parts of Cuba, the Bahamas and Florida, and even runs into several other areas in the southeastern U.S. The long stretch of lights to the left of center frame gives the shape of Miami. (NASA) 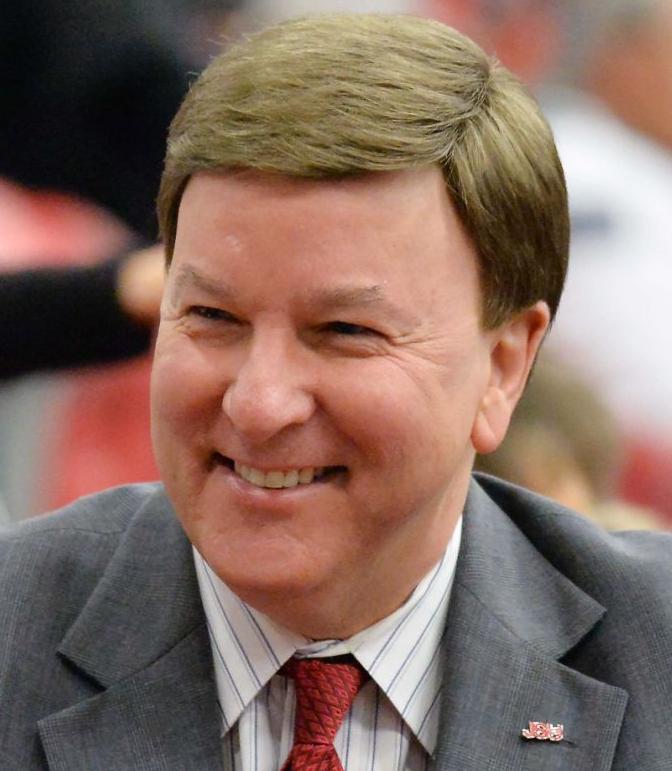 It’s the first day of a war between the world’s largest military powers.

From a launch pad somewhere in Asia, a rocket rises into the sky. Its payload: A robot designed to sneak up to a U.S. military satellite, grab it and steer it off course, knocking it out of the fight. Elsewhere on earth, high-powered lasers flash into space, trying to blind enemy sensors peering down from orbit. Generals fret over whether to use satellite-killing missiles that could fill orbits with deadly debris.

It sounds like something from a Hollywood thriller. But space and defense experts say it’s something the world’s most advanced spacefaring nations are actually planning for. And the Anniston area’s representative in Congress is calling for a major reorganization of defense assets – and possibly even the creation of a new branch of the military – to get ready for conflict in space.

“In a nutshell, we’re too sluggish to respond to the challenges in space,” Rep. Mike Rogers, R-Saks, said last week.

Rogers is a member of the powerful House Armed Services Committee, and chairman of the Strategic Forces subcommittee that oversees nuclear weapons and military assets in space. In House hearings and opinion pieces for Washington news outlets, he’s calling for a reorganization – one that might ultimately end in creation of a Space Force separate from other military branches – this year.

It may sound far-fetched, but experts on space warfare say there’s a real chance conflicts in space could happen, and could escalate quickly.

“If the Chinese want to go to war in space, I think what you’re talking about in the end is World War III,” Michael Krepon, co-founder of the Stimson Center, a D.C. think tank that studies security issues, said.

Krepon said the current era of military competition in space dates back to the 1980s, when the U.S. launched a missile from an F-15 fighter plane that killed an aging American satellite in orbit – a test that proved satellites could be shot down.

Ten years ago this month, China got into the satellite-shooting game, downing one of its own orbital devices. By then, the military stakes in space were much higher.

“In the first Gulf War, we didn’t have to have space capabilities,” Rogers said. “Now we do.”

Twenty-five years ago, seemingly high-tech smart bombs were guided by lasers. Bombers and cargo planes had navigators on board. Now a global positioning system, or GPS, guides the planes and many of the weapons. And spy satellites, in use for decades, are as vital as ever.

“The United States is more dependent on space than any other nation,” said Scott Pace, director of the Space Policy Institute at George Washington University.

“Initially you shoot to hit,” he said. “When you’ve proven you can do that, you can shoot to miss.”

If space warfare is going on now, it’s probably not as cinematic as all that.

“It's not really as sexy as Hollywood leads you to believe,” wrote Brian Weeden, a technical analyst for the Secure World Foundation, a think tank that studies security issues, in an email to The Star. “The most likely ‘warfare’ (and what's going on right now) are jamming and cyber attacks against things like GPS and satellite communications.”

But a space war with kinetic-kill devices, if it happened, could create a cloud of space junk that could keep anybody from using Earth orbit, Krepon said.

That has implications beyond the battlefield.

“Think about just one of our satellite systems: GPS,” Rogers, the Congressman, said in an email to The Star. “If you use an ATM, a cell phone, you fly on an airplane, or you eat food, you are reliant on what GPS does for us.”

But there are other ways to disable a satellite, Krepon said. Electronic jamming has been a part of earth-bound warfare for decades. Ground-based lasers could blind a satellite.

“You could send a satellite up with a paintbrush to paint over another satellite’s sensor,” he said. It’s a “silly” example, Krepon said, but countries may be thinking about other ways to sneak up to another satellite and knock it out.

Russia and China may already be wetting their paintbrushes. CNN last year reported that the Russians have twice tested satellites that seem to be able to sidle up to other satellites, while China launched a device that may have actually grabbed hold of another satellite in orbit.

America has its own secretive spaceship: the X-37B, a reusable unmanned drone that looks like a smaller space shuttle. Military officials have acknowledged its existence and the fact that it spends months at a time in space.

Asked if the X-37B is a space weapon, Rogers said he couldn’t comment on its purpose.

Krepon said he doubted the X-37B exists to sneak up on other satellites, because it hasn’t been deployed to the same orbits – and because other countries would be able to see it if it did.

Still, the U.S. seems to be spending a significant amount on military space equipment.

“How much are we spending? I’d say it’s on the order of another NASA,” Pace said.

The military space budget amounts to about $25 billion, according to Weeden, the Secure World Foundation analyst. That includes money spent by various military branches now, plus the National Reconnaissance Office, which operates spy satellites.

The budget for NASA, the civilian space agency, was about $18 billion in 2016.

There may be some overlap in those budgets. Military satellites are largely under control of the Air Force, but the building and launching of space assets is spread out over an alphabet soup of agencies. That’s exactly the reason to reorganize, Rogers said.

“This capability is spread across three services and several agencies and it’s not a priority for anybody,” Rogers said.

In an email, Rogers said auditors once tried to develop an organizational chart for military space assets, but couldn’t finish it. They found 60 entities in charge of various space assets – each of which could say no to new projects, Rogers said.

Rogers thinks there should be a single entity to take charge of the military mission in space. In an opinion piece published earlier this month, he compared the space situation to the state of U.S. special operations forces in the 1970s, or the Army Air Corps in the 1940s.

The U.S. set up a joint Special Operations Command in the 1980s to coordinate the efforts of several elite forces. The Army Air Corps became the United States Air Force in 1947.

A separate branch of the military — a Space Force — is one of the options on the table for Rogers. He said a Space Force is likely to emerge within a few decades. Space experts say there’s not yet enough military activity in space to justify a Space Force in the short term.

“There really isn't anything we do purely for space itself,” wrote Weeden, the Secure World Foundation expert, in an email to The Star. Most of the money spent in space right now supports ground missions, he said.

Asked if the U.S. is already in a space arms race, space experts said no. But the way they said it is telling.

“I wouldn’t call it an arms race, because I’m old enough to remember a real arms race,” said Krepon, 70. “It’s an intensified competition that could be on its way to becoming an arms race.”

There’s also a chance for a military space race that doesn’t involve weapons. Rogers said he wants “offensive capabilities” but is just as concerned about “resilience” — building up an ability to quickly replace downed satellites, for instance. Krepon said the best deterrent may be cooperation with other countries or private companies to make sure there are backups for the services military satellites provide.

Krepon largely uses examples from the Cold War nuclear standoff to describe the dynamic of space warfare. That’s largely because a full-scale war could really mess up orbit for future uses, and would almost certainly lead to war on Earth, if one weren’t already underway.

Krepon thinks it’s something countries should be talking about. A mistake or misunderstanding could lead to a conflict in space that no one wants, he said.

“Deterrence alone can be very dangerous,” he said.

Nuclear powers have treaties to limit the growth of their arsenals, Krepon said. More importantly, he said, there are less-formal rules of the road and lines of communication to keep conflicts from escalating. During the Cold War, if planes buzzed each other in the Bering Straight, or ships from two navies came close to a collision, there were protocols to follow.

Not so in space. The 1967 Outer Space Treaty, an outgrowth of the Cold War, prohibits nuclear weapons in space. Beyond that, there are few rules.

Even Krepon is skeptical of whether a new space treaty is a good idea. It would be too hard to verify whether all parties are following the rules, he said. But he does support less-formal talks about rules of the road.

Rogers isn’t so sure.

“It never hurts to have a dialogue,” Rogers said of talks with China or Russia. “But I wouldn’t trust either of them further than I can throw them.”

More than once, Rogers has filed bills to pull the U.S. out of the United Nations – a likely venue for any such talks – and he has warned for years that Russia is violating the Intermediate Nuclear Forces Treaty that ended the Cold War.

Pace, the George Washington professor, said rules are needed, but the parties aren’t ready to negotiate.

“It’s probably no surprise to say that the Russians have been difficult to talk to,” Pace said.

If there ever are talks, Rogers is in a good position to be one of the talkers, Krepon said. Rogers is a “key player” in space warfare, he said, and few would accuse him of being soft on the other side.

“His credentials as a rock-ribbed conservative aren’t challengeable,” Krepon said.

Pace thinks Rogers’ reorganization idea could come to the fore in Congress sooner rather than later.

“Mike Rogers is on to something,” he said.