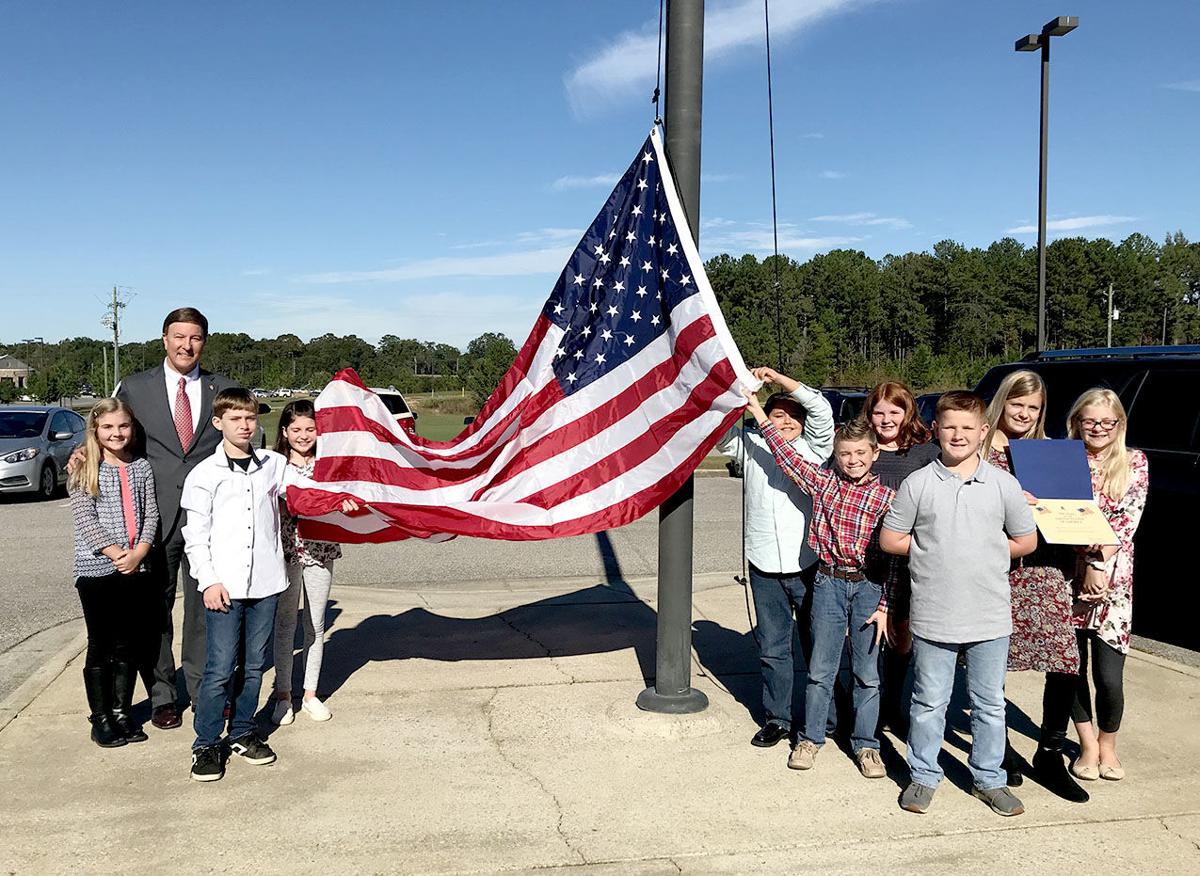 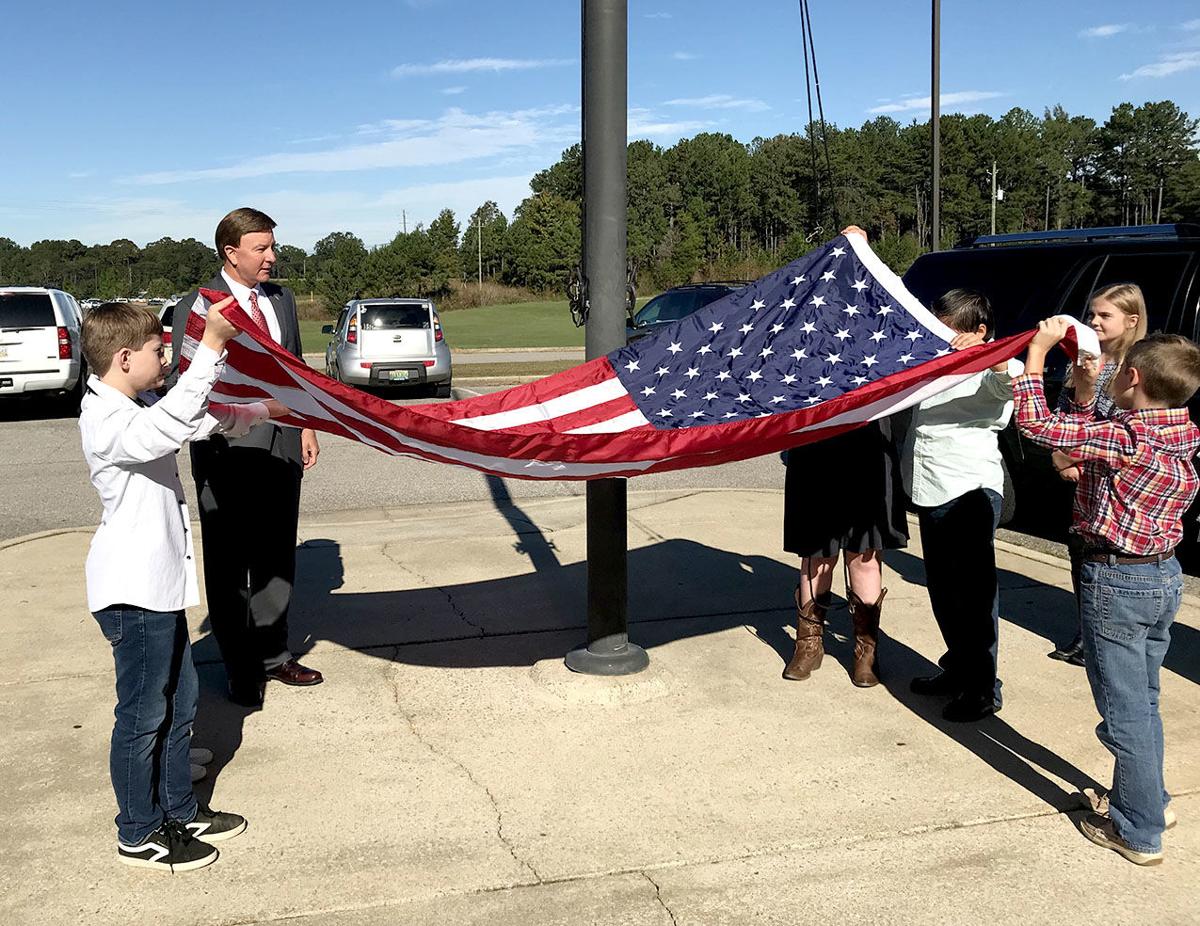 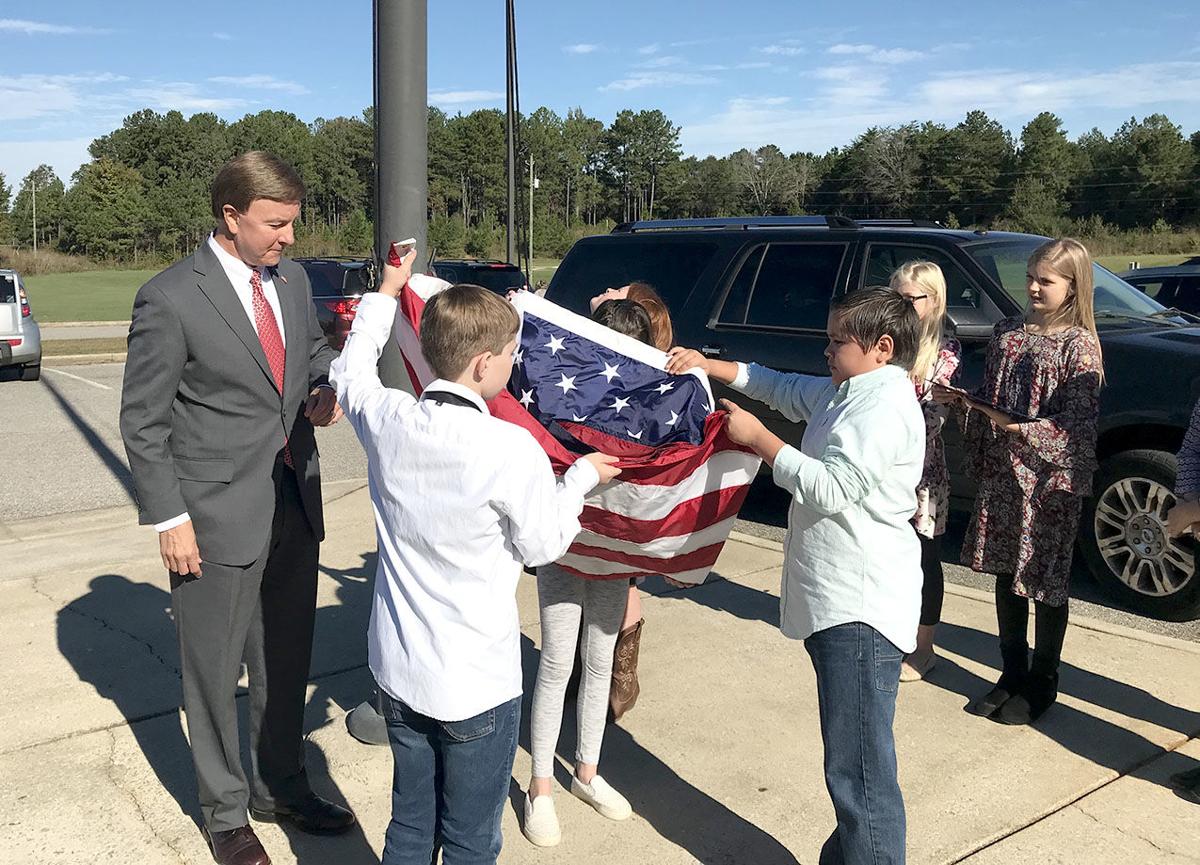 Alabama’s 3rd District U.S. Congressman Mike Rogers says he is not terribly concerned about the effect President Donald Trump’s proposed 5 percent across-the-board budget cuts might have in his district, saying the cuts are needed if the deficit is to be kept in check.

Rogers was in Munford Thursday morning to present a group of fifth-graders with an American flag that had previously been flown at the Capitol in Washington, D.C. Fifth-grade teacher Shawn Jones said she had reached Roger’s office after her husband, Marine Lt. Col. (ret) Bobby Jones had given a presentation on proper handling of the flag and pointed out the one flying over the school needed to be replaced.

“I think it’s important for kids to get to meet their congressman,” Rogers said. “When I was young, I got to meet my state representative, and obviously that had some impact on me, but I never met my congressman. It shows that you care about the schools, and bringing this flag will get them to think about the Capitol and about the relationship between their school and Washington.”

Wednesday evening, it was reported that President Donald Trump had asked for cuts of at least 5 percent in every Cabinet-level department, including defense. Rogers said Thursday that he is in favor of the cuts.

“The president is right to be looking at fiscal restraint,” he said. “Defense spending rose dramatically this year and next year, because it had been so underfunded for the last decade. But the Department of Defense is a huge organization, and there’s a lot of bloat there. Mack Thornberry (a Republican congressman representing the Texas Panhandle) is trying to get some of the waste out of the acquisition process. I think some added efficiencies could more than cover the 5 percent the president is asking for.”

He added that he is also not specifically concerned about what the cuts, particularly to defense spending, might mean to his district in east Alabama.

“This is why I’m an advocate for the Space Force,” Rogers said, referring to Trump’s proposed creation of a sixth branch of the U.S. military. “Right now, the Air Force bureaucracy is just so slow and bloated that it makes it difficult to get anything done. We waste so much money in acquiring new satellites, just like we do with new fighter jets or whatever else. What we need is to be more efficient, more like the private sector. We could save a fortune.”

Rogers is up for reelection this year, facing off against Democrat Mallory Hagan in November. In looking toward a pivotal midterm, Rogers said he is “cautiously optimistic” about the GOP’s chances of holding onto the House.

“I’m seeing some good trends, I’m seeing the base getting energized,” he said. “Our problem was, the administration and congress have done such a good job with the economy and with making the world safer, we have gotten complacent. The Democrats, on the other hand, are not happy about the tax cuts or rebuilding the military and they’ve really been on fire about President Trump, so they’ve been really energized for the last 22 months or so. They can’t wait to get out and vote. Whereas the Republican base is happy, which makes them less likely to vote.”

That trend toward Republican complacency is changing, however, largely in reaction the Brett Kavanaugh confirmation hearings last month. Those hearings “drew national attention, and I think people were disgusted about what was done to him (Kavanaugh). I was on a nationwide conference call not long ago that said if our base can stay angry for the next two and a half weeks, we’ll do fine in the midterms.”

In addition, he said, voters in east Alabama seem to be particularly concerned about the possibility of Nancy Pelosi becoming Speaker of the House again. The other issues, he said, included dropping unemployment, rising gross domestic product and an increase in overall economic security.

“It’s been a refreshing change over the past 10 years,” he said.

Trump keeping a promise to spend a great deal of time campaigning for Republican candidates is also helpful, he added.

“Best-case scenario, we hold on to a narrow majority, but it will be a very narrow majority, 12 or 13 seats at best. In a worse case, the majority may get down to six or seven. And on a bad day, we lose.”