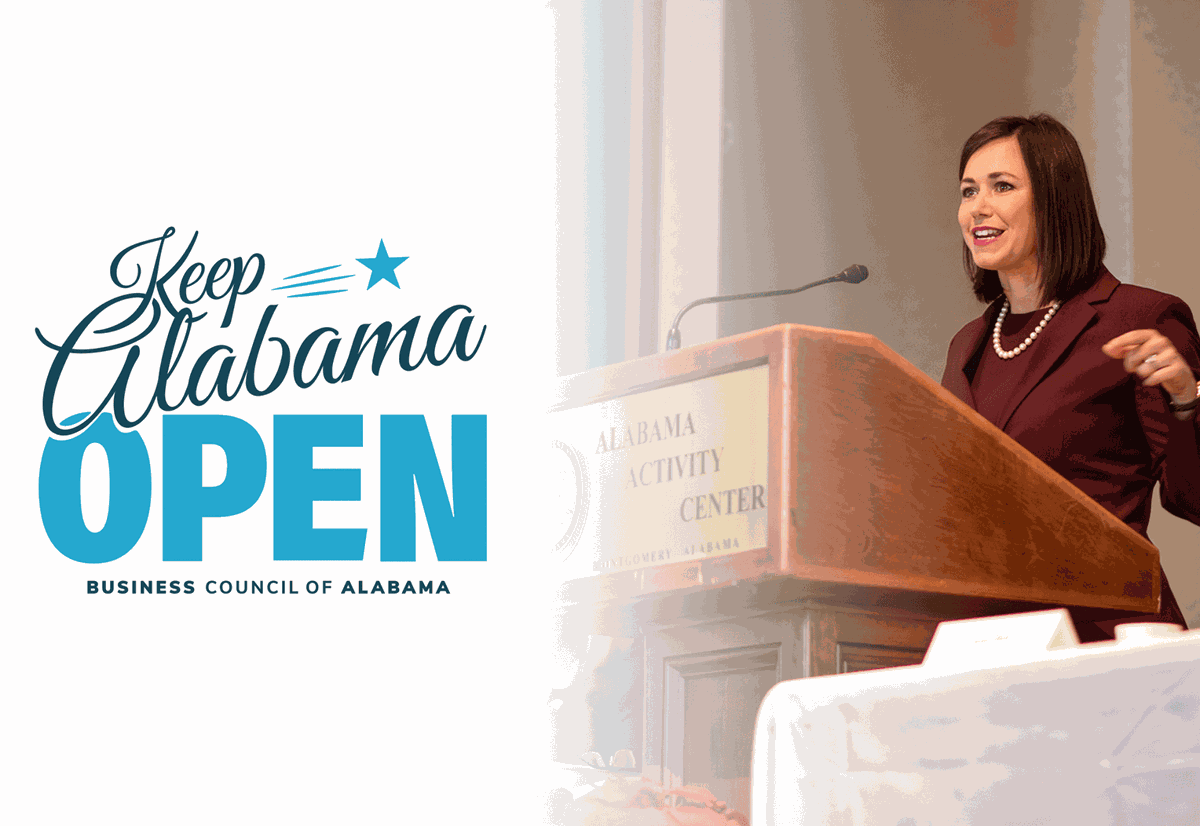 The Business Council of Alabama launched the “Keep Alabama Open” movement Tuesday in reaction to some states taking on stricter public health orders and continued talk of federal mandates from the incoming Biden administration aimed to slow the spread of COVID-19. 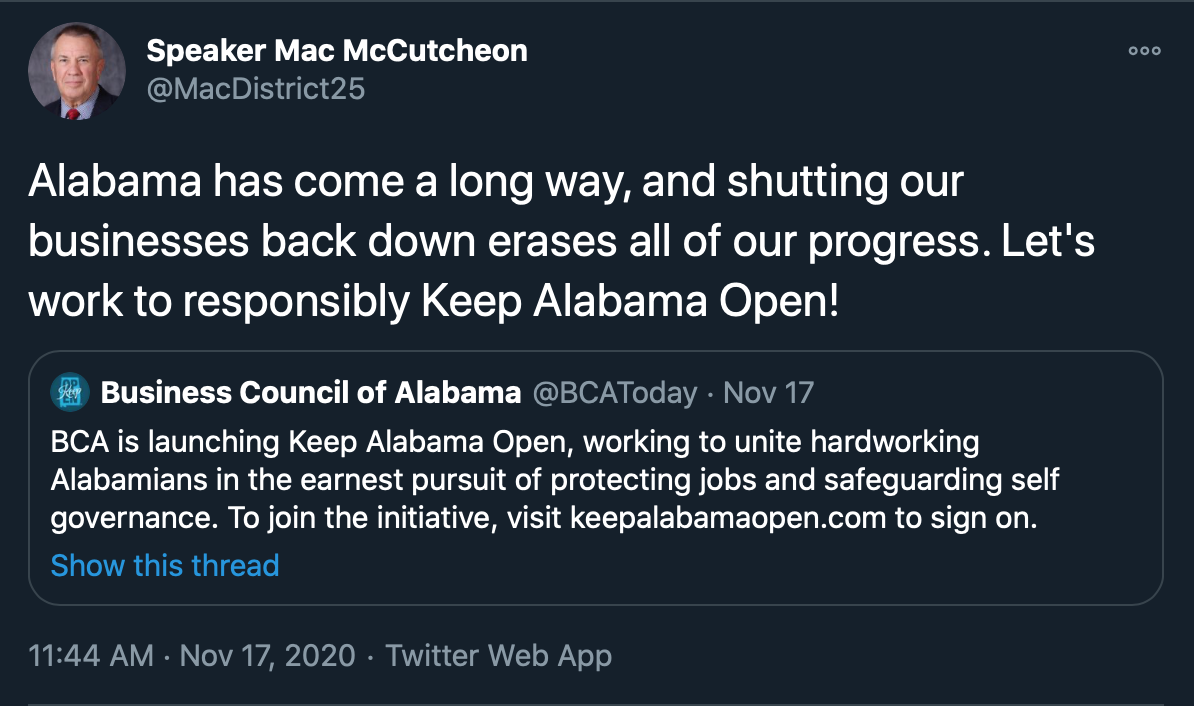 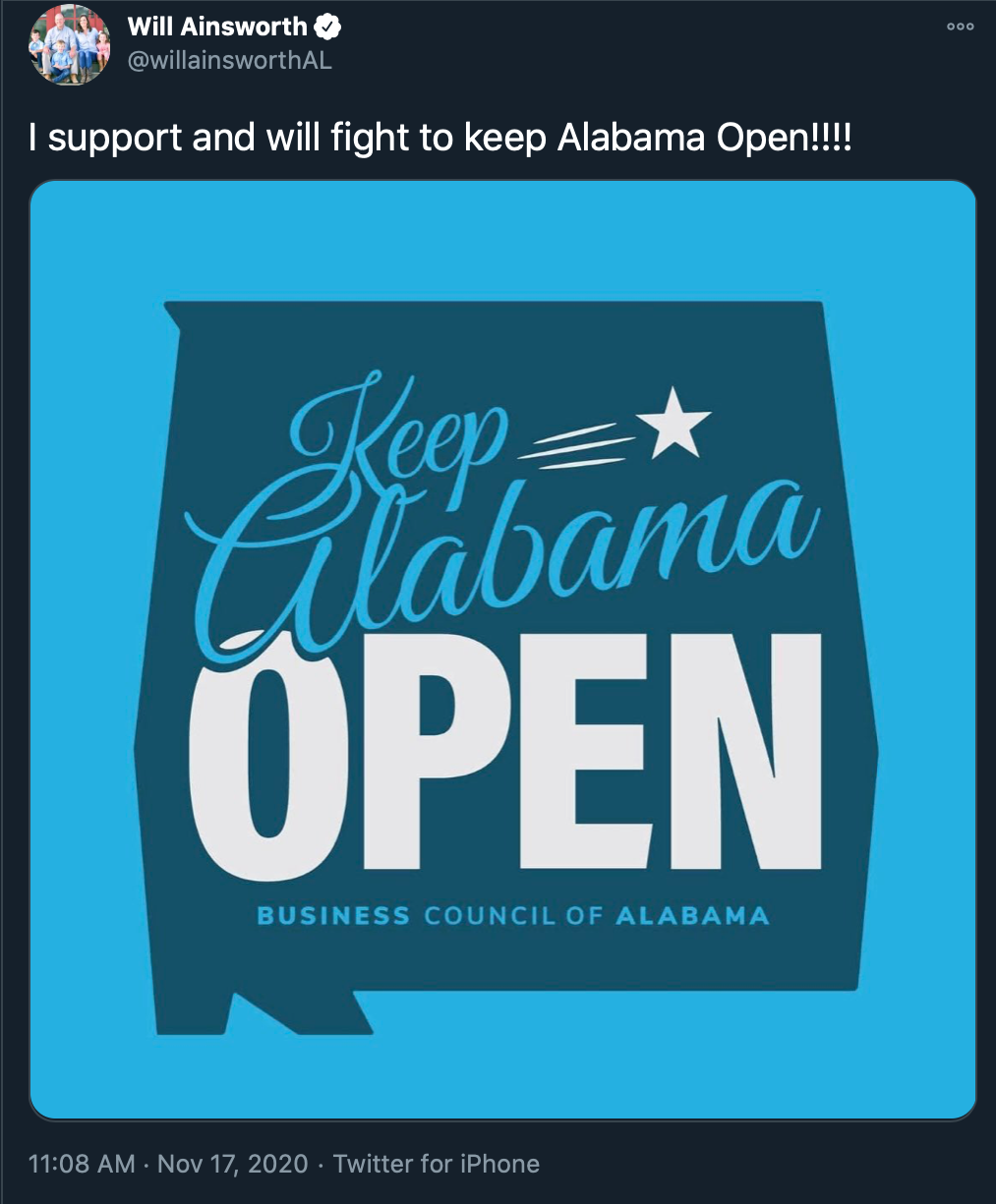 MONTGOMERY — The Business Council of Alabama launched the “Keep Alabama Open” movement Tuesday in reaction to some states taking on stricter public health orders and continued talk of federal mandates from the incoming Biden administration aimed to slow the spread of COVID-19.

The council argues that stricter mandates, including Gov. Kay Ivey’s “stay at home” orders from the spring, unnecessarily harm business and aren’t ultimately effective in curbing the virus.

“Nothing is more important to BCA than the safety of hardworking families across Alabama,” Katie Boyd Britt, president and CEO of the Business Council of Alabama, said in a press release. She encouraged Alabama businesses to sign an online petition that will be shared with Ivey and other state leaders, including the state’s congressional delegation.

“As this year has already shown, Alabamians are at their best when overcoming adversity,” Britt continued. “COVID-19 has stolen lives and destroyed livelihoods across our state, and these next few months will require all of us working together to win this fight. Now is not the time to mandate a nationwide, one-size-fits-all lockdown; instead, we must each renew our personal commitment to combating this invisible enemy in order to safely and responsibly Keep Alabama Open. BCA commends Governor Ivey and her administration for continuing to exercise thoughtful leadership in this unprecedented time.”

Businesses are also allowed to forgo the six-foot social distancing rules so long as people are wearing masks and are separated by an “impermeable” barrier like plexiglas partitions.

Ivey’s Press Secretary Gina Maiola told Alabama Daily News that the governor has no intention of issuing a stricter mandate closing businesses and ordering residents stay home as she did back in March when the virus first hit the state.

“Her role as governor is to protect both Alabamians’ health and their well-being, and as she puts it, ‘You cannot have a life without a livelihood,’” Maiola said. “The governor continues to take a thoughtful approach for our state, ensuring that Alabama stays safely open for business. The governor appreciates this effort by the business community to partner with her as she works to make this a reality. Alabama should make decisions based on what is best for Alabama, and Gov. Ivey will not be led by a one-size-fits-all Washington mandate.”

Congressman Robert Aderholt, R-Haleyville, went into a self-imposed quarantine recently after being potentially exposed to COVID-19 and will miss votes in Washington, D.C. this week out of an abundance of caution. He said more such practicing of personal responsibility, rather than more mandates, is how the nation can best combat COVID-19, which is why he supports BCA’s initiative.

“I think this is a good, productive initiative,” Aderholt said in an emailed statement. “We learned early on in the pandemic, that closing everything down was not the right answer. It simply turned one struggle (fighting COVID) into compounded struggles (fighting COVID and fighting to save our economy, jobs, and paychecks). While I am concerned about the rising cases of COVID in our state, shuttering businesses will not defeat COVID-19.”

Alabama’s unemployment rate reached a record 13.9 percent in April as the state’s stay-at-home orders took effect. As of September, the unemployment rate had fallen to 6.6 percent and the rate for October is expected in the coming days.

The Chamber of Commerce Association of Alabama, National Federation of Independent Business, Alabama Restaurant and Hospitality Association and the Alabama Retail Association all partnered with BCA in promoting the campaign.

Ivey and Britt both made a point to encourage Alabamians to follow all necessary health and safety guidelines to help slow the spread of COVID-19, including wearing a face mask, maintaining social distance, quarantining if sick and proper sanitation practices.

So far, New Mexico is the only state that has initiated a shelter-in-place order for the next two weeks, making most non-essential businesses closed to the public. President-elect Joe Biden confirmed through a spokesman that he intends to follow through on a promise of a national mask mandate, though no further federal mandates are planned at this time.

Alabama has added more than 2,000 new COVID-19 cases daily over the last week as hospitals are treating more patients suffering from the virus, the Associated Press reported.

With caseloads on a steady rise since Nov. 8, the rolling seven-date average of new cases reached 2,040 on Tuesday, a slight improvement from a day earlier, statistics showed. Virus-related illness is at its highest point in the state since August.

The pace of deaths has increased since late October as the state’s death toll rose above 3,300 people, and nearly 1,300 people are hospitalized, the most in three months.