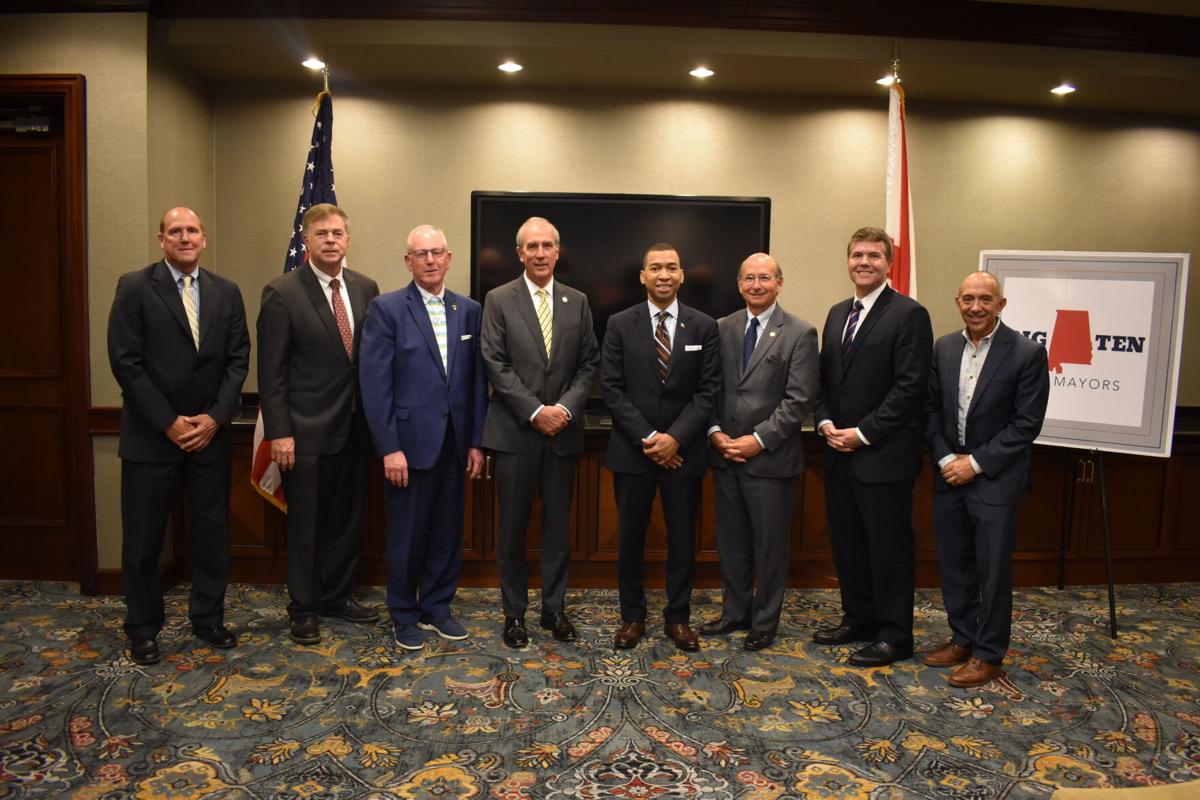 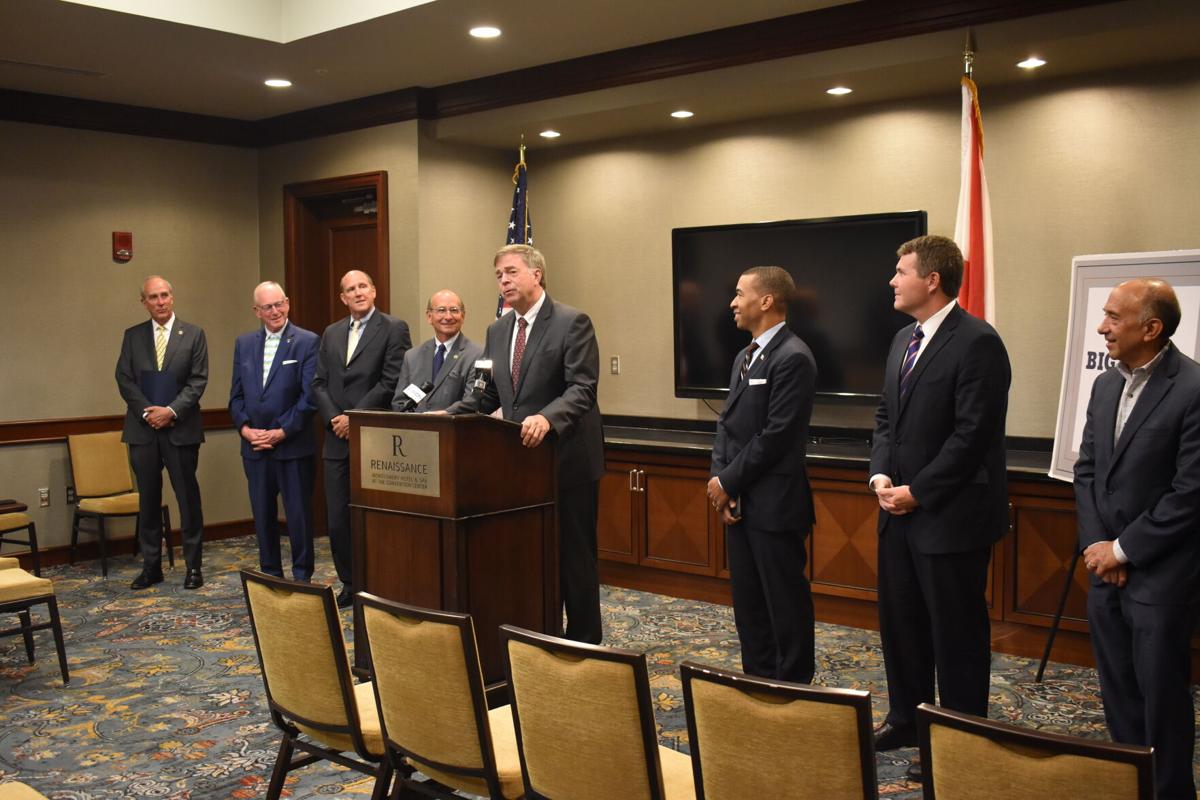 Huntsville Mayor Tommy Battle speaks during the gathering of the state's 'big 10' mayors to express concern about the effect of competing state and federal vaccine mandates on businesses. 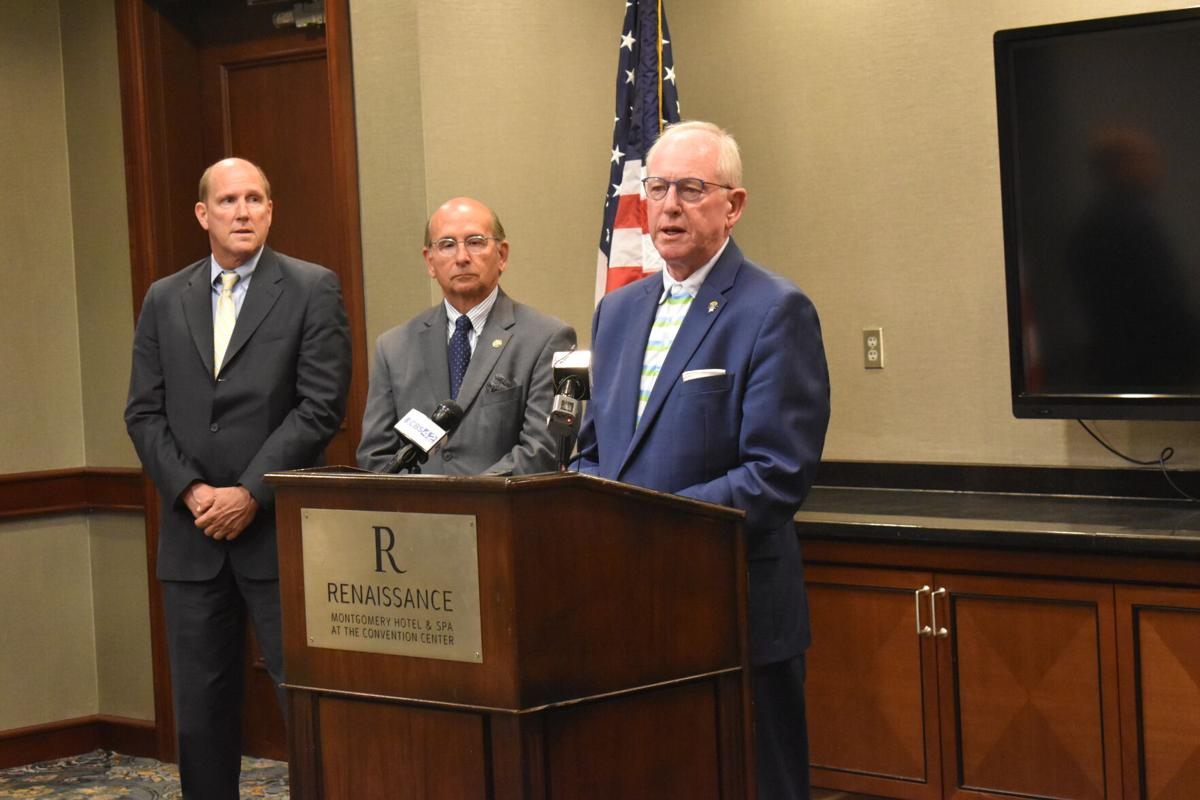 Decatur Mayor Tab Bowling speaks during the gathering of the state's 'big 10' mayors to express concern about the effect of competing state and federal vaccine mandates on businesses.

MONTGOMERY — Mayors from Alabama’s largest cities gathered in the state capital Monday where they expressed concern over any new laws that would put Alabama businesses in conflict with federal COVID-19 vaccine rules.

“We want to make sure that we don’t place our companies into double jeopardy,” Battle said. “If you place them into double jeopardy where whatever actions they take may be an action against the laws of either the state or the federal government, then we’re not doing the job that we need to do to make sure that our industries and our companies throughout the state of Alabama are able to do what they need to do.”

Right-leaning politicians and political groups, including the Alabama Republican Party, have urged Gov. Kay Ivey and state lawmakers to enact a law banning any business from requiring employees to get vaccinated. That would contradict President Joe Biden's directive through the Occupational Safety and Health Administration mandating that all employers with more than 100 workers, health facility workers or federal contract workers be vaccinated or submit to weekly COVID tests.

Monday’s press conference coincided with Ivey announcing an executive order that would protect state government workers and contractors from penalties for not following Biden’s vaccine mandate. The executive order didn’t say anything about protections for private-sector employees, but Alabama Attorney General Steve Marshall said on Friday that he would also be challenging Biden’s mandate in court.

Ivey said any new state laws would not be enough to respond to Biden’s mandate and maintained that the “courts are where this will be resolved.”

Rep. Ritchie Whorton, R-Owens Cross Roads, is sponsoring one of the vaccine requirement ban bills, which would also allow any employees affected to sue their employer for damages. Last week, more than a dozen state business groups expressed opposition to that proposal citing the threat of lawsuits.

The Alabama Legislature heads into its second special session of the year for redistricting on Thursday. Despite the urging of some in her party, Ivey did not include vaccine mandate legislation in the list of topics to be considered. Lawmakers could still bring up and pass bills not on the agenda with a three-fifths majority vote in both the House and Senate.

Battle pointed to institutions like NASA's Marshall Space Flight Center, Maxwell Air Force Base in Montgomery and all the adjoining defense contractors that could be negatively affected by competing state and federal mandates.

The mayors also expressed their unanimous support for the upcoming constitutional amendment vote on the 2022 ballot to approve Aniah’s Law, which would allow judges more discretion in denying bail to people accused of violent crimes.

Maddox said he believes the law will help keep communities like Tuscaloosa safer.

“It is frustrating, I know, to our neighborhoods and our communities, that people that have committed very violent crimes are back on the street in a legal process,” Maddox said. “That doesn’t make sense. And Aniah’s law will help remedy that for judges who can then withhold bail until that trial.”

“All the money in the world isn't going to change the crime that's happening, it’s the passage of Aniah’s law and trying to get repeat offenders off the streets and into prison,” Bowling said.

Speaking for Mobile, Stimpson said another conversation that is beginning to take shape between the city and state governments is making the state’s internet sales tax more equitable.

“We don’t know the exact remedy right now but what we feel like is that there are cities on the short end of online sales, and there’s got to be some creative way going forward that we can fix that,” Stimpson said.

Cities and counties have been arguing for a change in the state’s online sales tax formula for multiple years now, with some of the state’s larger cities claiming the current formula doesn’t deliver all that is owed.

But the formula, which splits 50% of the revenue to the state and the other half to cities and counties, could end up hurting other entities should it be adjusted.

“It’s a zero-sum game,” Greg Cochran, Executive Director of the Alabama League of Municipalities explained to Alabama Daily News. “If you give more to one group of individuals, it has to come from somewhere.”

Cochran and Stimpson said there isn't currently any legislation in the works to handle the online sales tax formula but the conversation continues.