Mens and Womens public restrooms at the Oxford Civic Center at Oxford Lake.

Mens and Womens public restrooms at the Oxford Civic Center at Oxford Lake.

OXFORD — The president of the City Council during a press conference Wednesday afternoon defended the council’s passage the night before of a law that restricts public bathroom use according to sex.

The conference came hours after the Alabama branch of a national organization that advocates for equal rights for gay and transgender Americans decried the law as “horrific and unprecedented,” and vowed to see it repealed.

Council President Steven Waits during the conference said the ordinance is meant to protect women and children from those who would take advantage of a bathroom-use policy held by the retail chain Target.

Target last week in a post on its website said that transgender shoppers and store employees could use bathrooms and fitting rooms that match the gender they identify with.

“Our citizens have a right to feel safe,” Waits said, adding that the council’s members were responding to Target’s policy, which they see as unsafe. “As the retail hub of East Alabama, public safety is of great concern to our city.”

Efforts Wednesday to reach a spokesperson for the chain for comment on Oxford’s law were unsuccessful. In an email sent Tuesday, Molly Snyder, the spokeswoman, said Target follows “all state and local laws.”

Waits and the city’s attorney, Ron Allen, both said Tuesday night that neither had any contact with the company before the ordinance’s passage. Waits said at the press conference that he’s since talked with representatives of the company, but declined to say what the nature of those talks were.

The ordinance itself was born and approved in a week’s time. Waits said he started receiving an “overwhelming” number of complaints from city residents immediately after Target’s post, which appeared April 19.

Allen, who declined at the conference to say if he expects the law to be challenged, said he was asked to draft it while on vacation last week.

“My involvement was less than a week,” the attorney said in a phone conversation Wednesday morning.

Asked if that allowed adequate time for the council’s members to consider the ramifications of the law, Waits said the concerns they’d heard pushed them to act.

“As a matter of fact, I believe our community expects us to expedite those concerns,” he said at the conference.

If Oxford does face a challenge in court over the ordinance, a legal organization founded by Alabama Supreme Court Chief Justice Roy Moore promised Wednesday to come to the city’s defense.

John Eidsmoe, senior legal counsel for the Foundation for Moral Law, said it “would assist the city attorney with our constitutional expertise,” gathering evidence, performing legal research or serving as co-counsel in any court case. 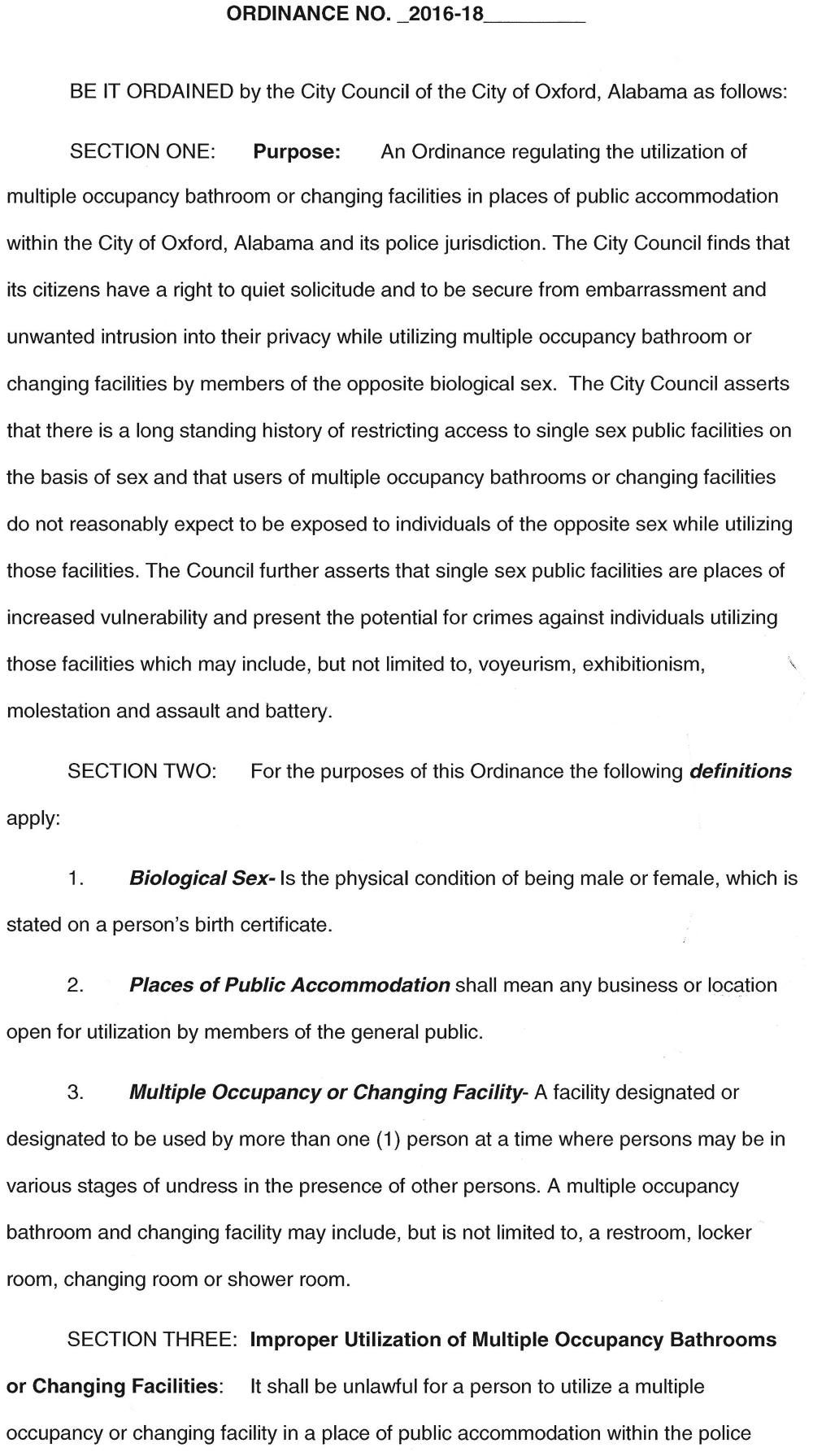 The Montgomery-based foundation, which describes itself as “dedicated to the defense of the Constitution and of Biblical values,” would offer the help for free, Eidsmoe said.

Wednesday’s conference was held at the Oxford Police Department’s station, with Chief Bill Partridge present to answer questions about enforcement of the law.

Violation of the law, which goes into effect five days after being posted for public review in city buildings, is a misdemeanor offense carrying a $500 fine or six months’ jail time.

Asked whether anyone had reported being harassed in Oxford’s public bathrooms, Partridge said he couldn’t recall.

“But we’re going down a slippery slope of political correctness” that could lead to such an incident, the chief said.

“It would just take one case to hit the media,” Waits said, and “people would be afraid to shop.”

Eva Walton Kendrick, state manager for the Human Rights Campaign in Alabama, thinks the ordinance’s passage may be just as bad for Oxford’s business.

Pointing out that the city prides itself on being a regional hub for commerce, Kendrick asked Wednesday if “that commerce is open to all people.”

The state organization she heads condemned the ordinance in a press release Wednesday morning, calling it “unprecedented in its establishment of criminal penalties for violations of the law.”

In a phone interview Wednesday afternoon, Kendrick  called those penalties the most distressing aspect of the law.

She noted that North Carolina’s HB2, which similarly restricts bathroom use at schools and other publicly-funded institutions and has sparked protests and arrests in Raleigh this week, doesn’t go as far.

Oxford’s ordinance — which city officials say is the first approved in the country — is only one measure in what Kendrick says has been a “massive spike” this year in state laws that reduce the access transgender men and women have to bathroom facilities.

“If you look at the exceptions” in the ordinance, Kendrick said, “it is clearly about targeting transgender people.”

Kendrick said the organization “will be actively working to repeal this ordinance,” and to educate Oxford residents on what it means to be transgender.

Meanwhile, Robin Leonard, co-manager of Dorsey’s Market in downtown Oxford, is glad the store only has single-occupancy restrooms.

“We’re a small business,” Leonard said, “and don’t have to deal with this issue.”

Leonard says it’s a complicated one, “too serious ... to have a knee-jerk reaction to.”

Teresa Cash came downtown from her home in DeArmanville to shop Wednesday, and said she was “totally in agreement” with the council’s actions.

“We have to protect our children, our women, even our men,” she said outside one of the shops lining Main Street.

Cash, though, said she hopes the ordinance doesn’t lead to discrimination against transgender men and women.

“Regardless of what your choices in life are, we should all be treated with respect,” she said. “God loves us all.”

Editorial: Scorn and ridicule in Oxford over bathroom ordinance

HOT BLAST: Twitter responds to Oxford's bathroom ordinance, and it's not kind

Speak Out: Oxford's new bathroom ordinance will do more harm than good

Speak Out: Oxford is leading the way with its bathroom ordinance