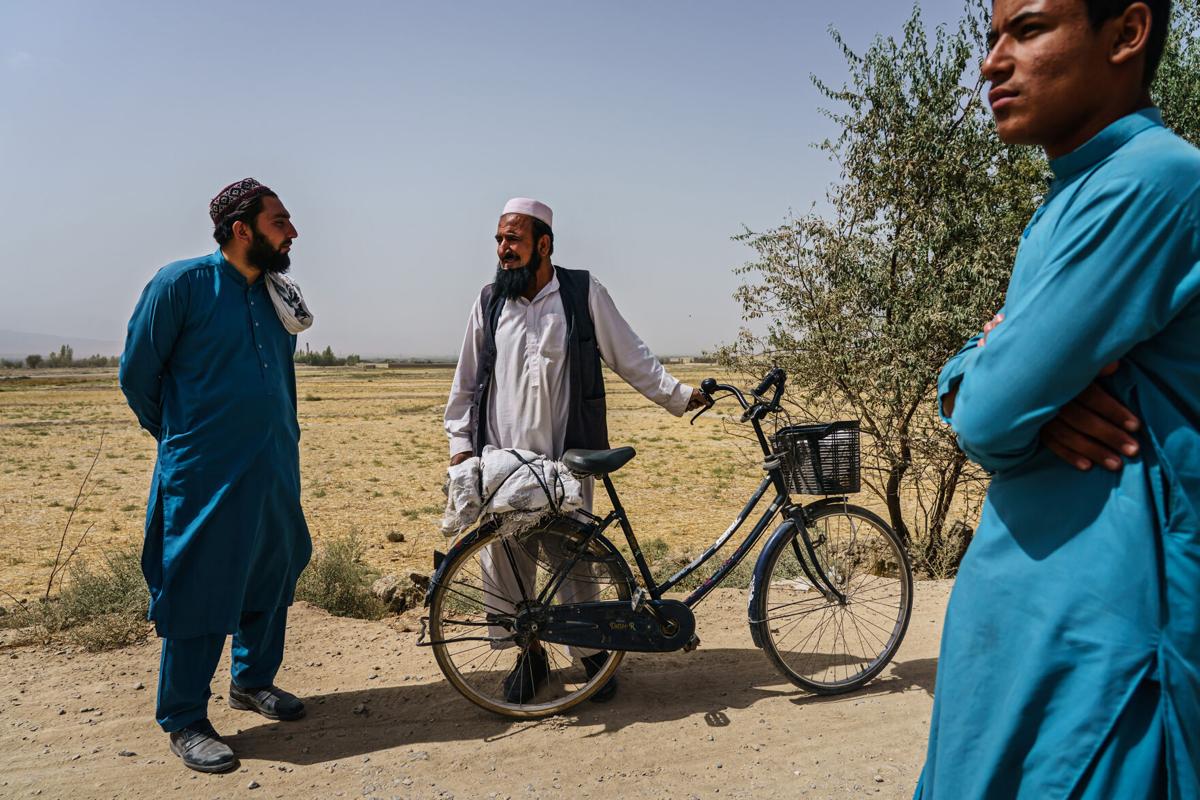 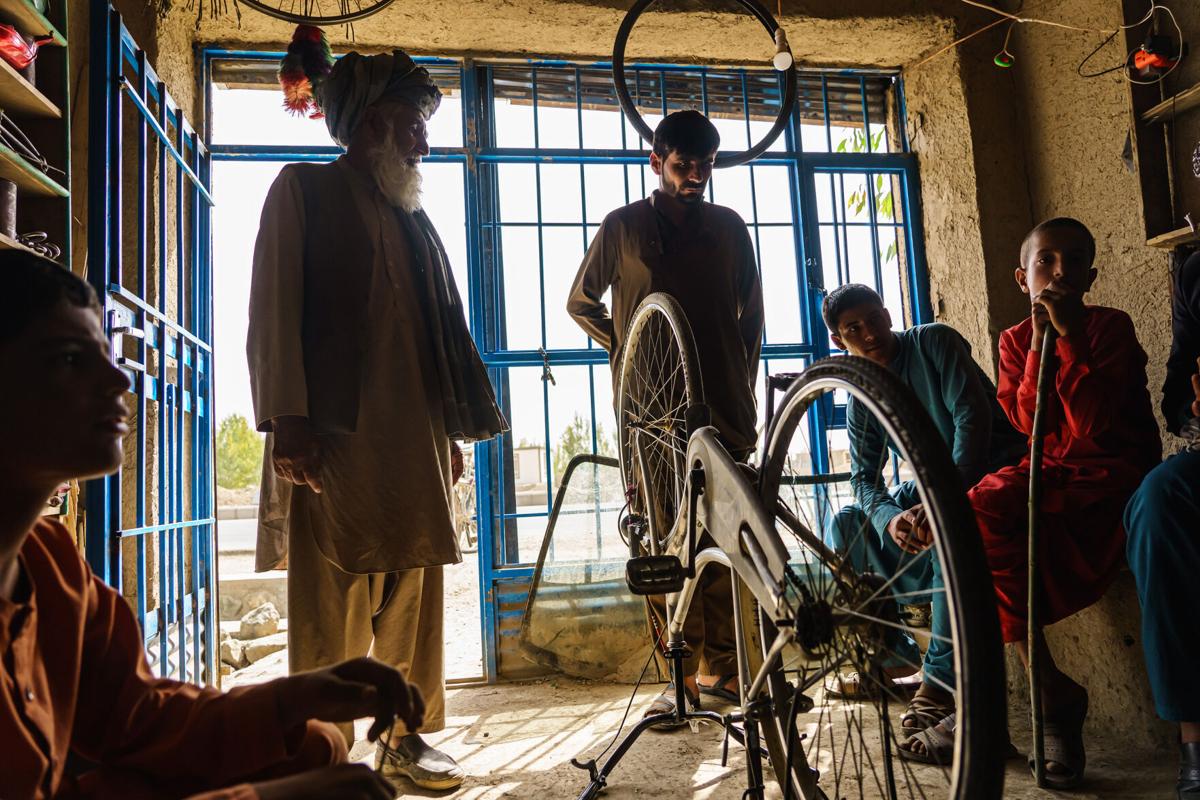 Customers find reprieve from the sweltering heat at a bicycle repair shop along the main road near Kulangar, Afghanistan. (Marcus Yam/Los Angeles Times/TNS) 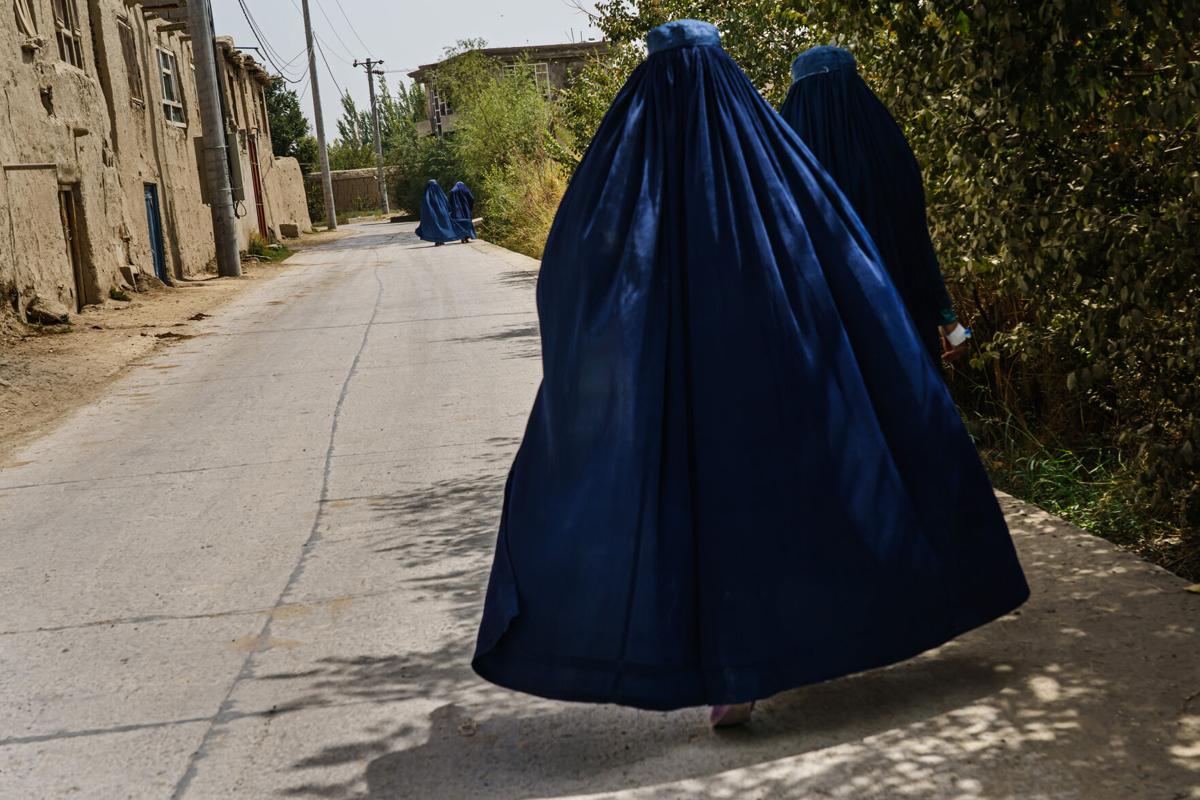 Women in burqas walk in the village of Kulangar, about two hours from the Afghan capital, Kabul. (Marcus Yam/Los Angeles Times/TNS) 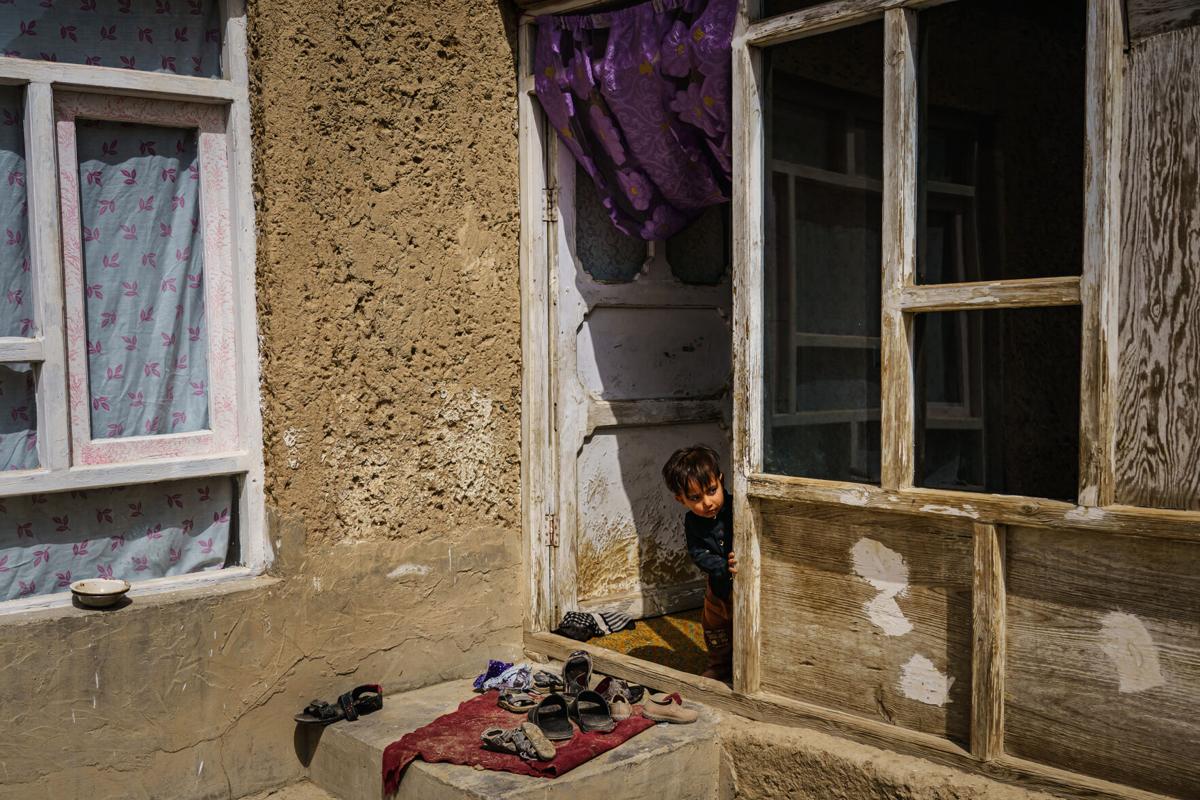 A young boy peeks out of the doorway of a home damaged during the 20-year war in Afghanistan. (Marcus Yam/Los Angeles Times/TNS) 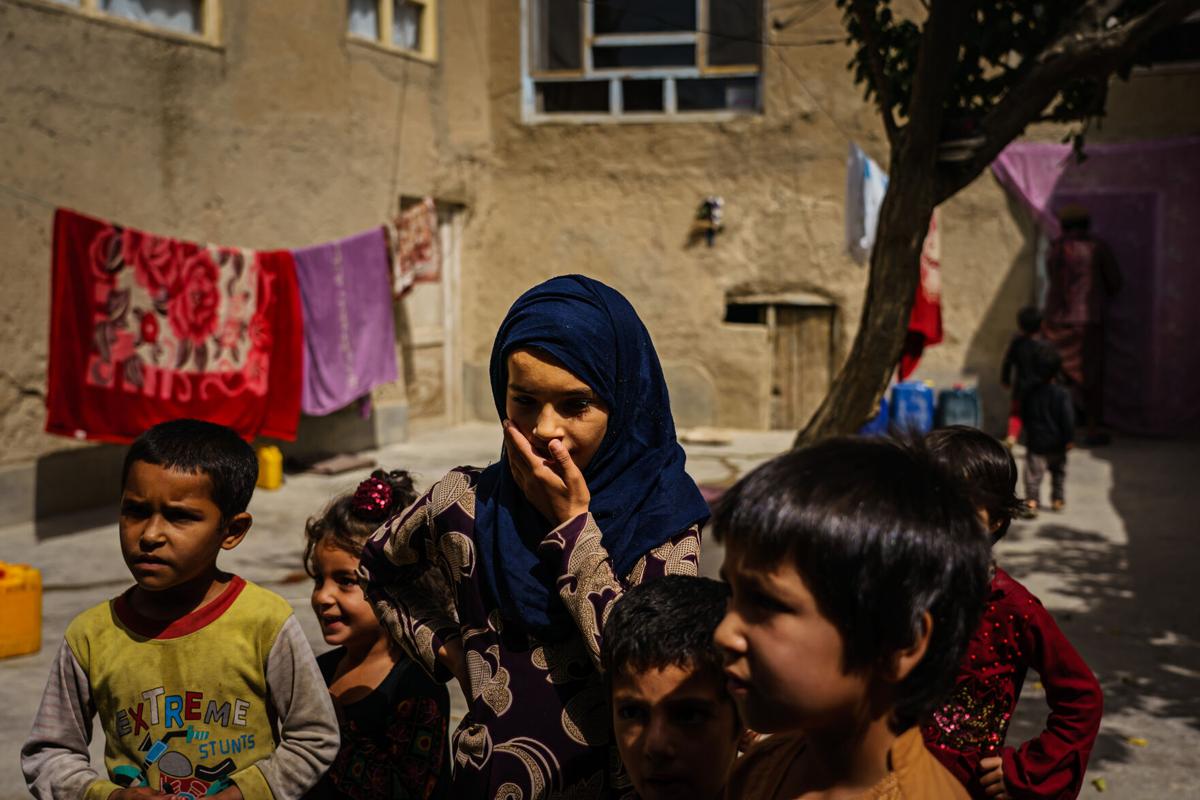 Nine-year-old Suniha, center, was wounded in an explosion when she was drawing water from a well at her home. (Marcus Yam/Los Angeles Times/TNS) 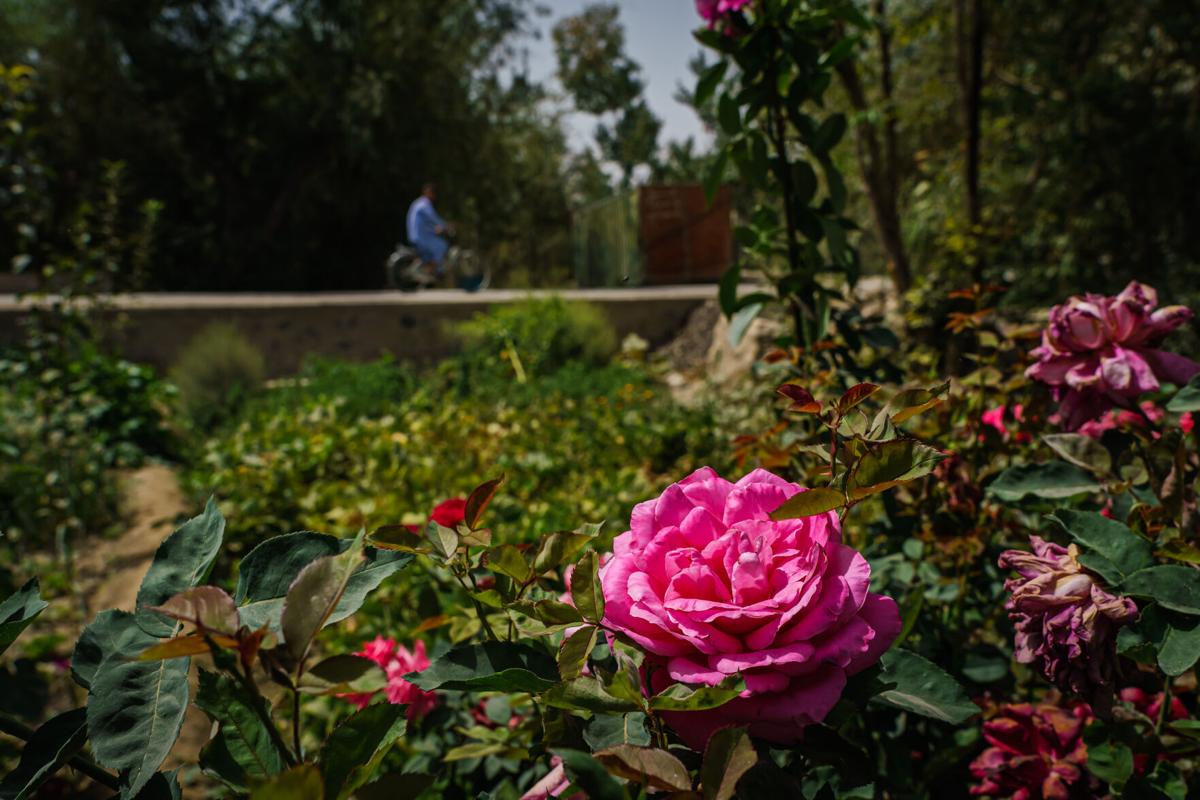 A small bridge connects one side of Kulangar village with the other in Afghanistan. (Marcus Yam/Los Angeles Times/TNS) 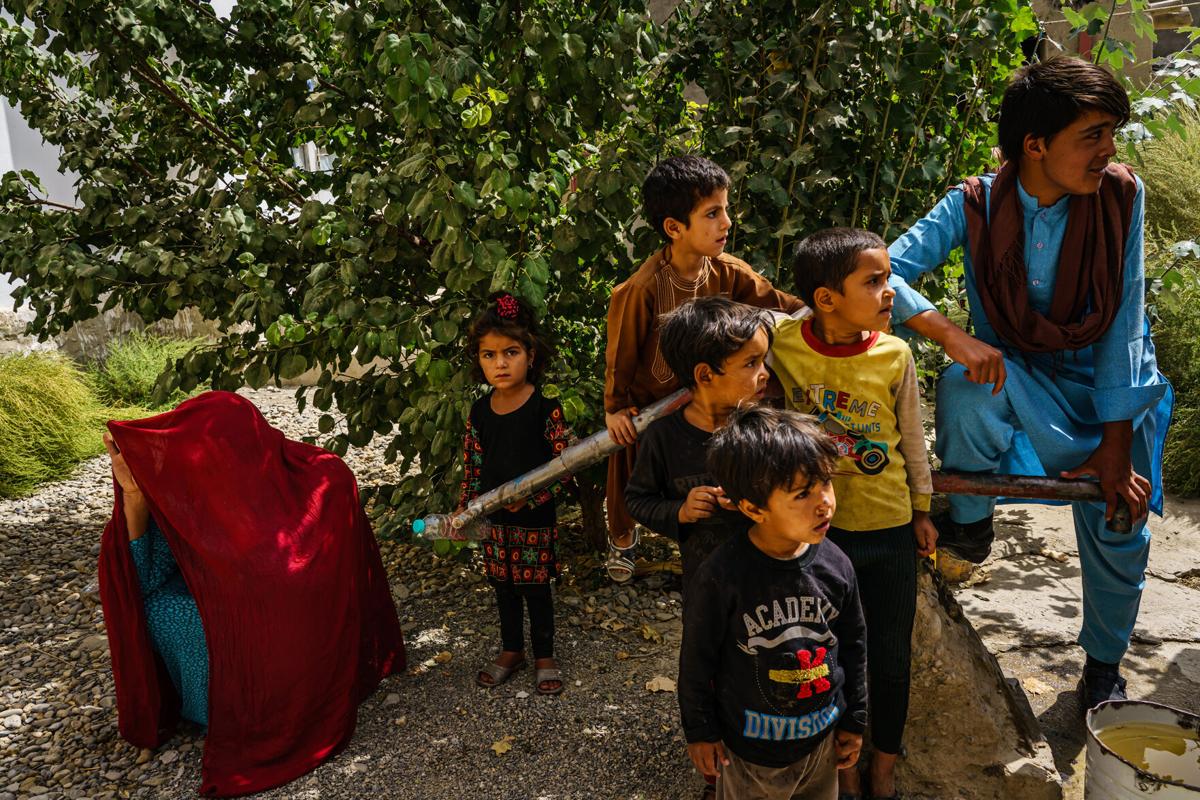 Shaimaa, left, covers her face and takes a rest as her family gathers water at their home in Kulangar, Afghanistan. (Marcus Yam/Los Angeles Times/TNS) 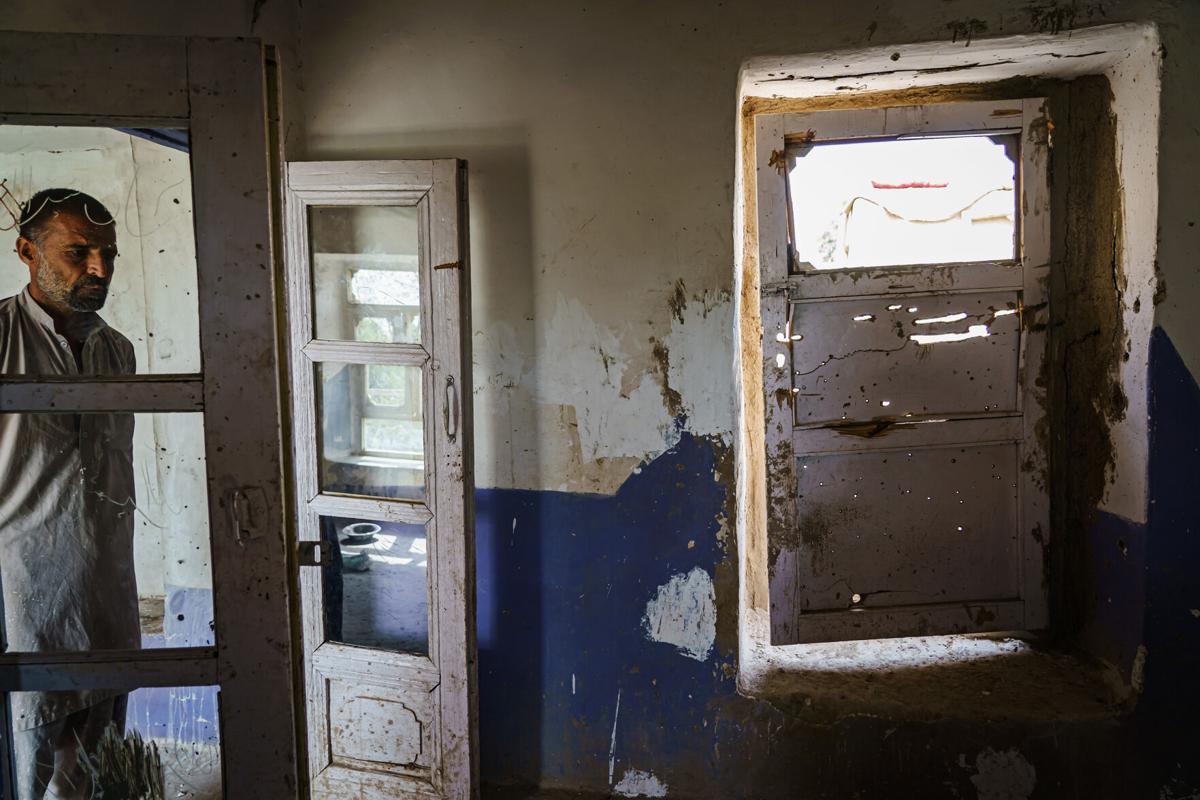 Many of the homes in the village of Kulangar, Afghanistan, were damaged in the long war between the Taliban and U.S.-backed Afghan forces. (Marcus Yam/Los Angeles Times/TNS) 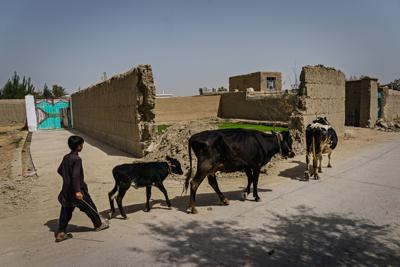 KULANGAR, Afghanistan — At a tiny, two-pump gas station off the two-lane highway running through Afghanistan's Logar province, Mohammad Farooq, the attendant, was unequivocal in his view of the United States.

"Since they left, we don't see ambulances every day. We don't see fighting or people injured. It's very good now."

Over in a dilapidated shack on the opposite side of the highway, 24-year-old Nasratullah Raihan said much the same as he watched a repairman fiddle with the rear sprocket of his bicycle.

"For the 20 years that America was here, it was problems," Raihan said, to the nods of others. "Planes, missiles, rockets — all of it was here. Every day you had people killed."

In recent weeks, anxious residents in Afghan cities such as Kabul, the capital, have grappled with the reality of a country back under the control of the fundamentalist, theocratically minded Taliban. Hundreds of thousands of people have escaped, unable to bear the prospect, while many more left behind have watched the literal as well as figurative erasure of trappings of life under the former, Western-backed government.

But in the countryside, where the Taliban has long held sway and where almost three-quarters of Afghanistan's 38 million people live, America's exit and the lightning-fast collapse of the Afghan security forces have brought something precious: peace.

Here in Kulangar, a village that's little more than a sprinkling of mud houses amid fields of wheat, tomatoes, beans and onions, that peace came Aug. 8, a week before Afghan forces disintegrated as the Taliban encircled and then entered Kabul.

"The government soldiers, they just ran off," said Nazeerullah Ahmad, 35, who had worked odd jobs around Pul-e-Alam, Logar's capital. "Everyone who lives here has been happy since then. We've had no security problems at all."

As the U.S. closed the chapter on its longest war, with the last troops departing Aug. 30, both allies and critics excoriated the Biden administration for not maintaining a presence in Afghanistan to try to safeguard some of the fledgling gains of the last two decades.

Most of those strides had come in the cities, especially Kabul, where tens of billions of dollars in aid transformed the Afghan capital into a relatively developed metropolis. Girls enrolled in school, and women — unveiled or otherwise — were employed in the companies that sprang up in the new economy.

But for the people of Kulangar, many of them subsistence farmers for whom Kabul — a mere two hours away — might as well have been another planet, there had never been much evidence of that Western largesse.

Instead, the legacy of the American presence was destruction, Ahmad said.

On a walk through the village, he and his fellow residents pointed out walls pocked by gunfire and by shrapnel from an errant mortar shell falling near a gate. The wall of another compound had a jagged maw left behind by a tank round. No house seemed free of damage.

And in each of those attacks, villagers said, someone had either been hurt or killed.

"It's impossible to write all names of the dead. … There were too many," Ahmad said.

One of the last to die before the U.S. left and the fighting finally stopped was Ahmad Sheer's sister, Massoudah. She was killed three months ago when a rocket slammed into the family compound after government soldiers had commandeered one of the rooms for its clear view of the village's bridge.

"I went to the authorities and they didn't help me," Sheer said. "They didn't even listen."

The authorities also didn't help Nayebullah Abassi, a 37-year-old farmer whose daughter Suniha, 9, was injured when she was drawing water from a well in the courtyard of her home.

"It was just a big explosion. Then I woke up in the hospital," Suniha said as her father pulled back her pink hijab to reveal the scar on her forehead. Abassi showed his own injuries, which included a bullet laceration to the knee and some shrapnel in his hip.

"The government never helped," he said. "They said we were Taliban and never gave us assistance."

The violence in rural Afghanistan, which bore the brunt of the last 20 years' fighting, intensified in the months leading up to the Taliban takeover. The United Nations' monitoring mission in Afghanistan reported a 47 percent increase in civilian casualties — almost 5,200 — in the first half of 2021 compared with the same period last year; much of that increase happened after May 1, when the U.S. and its North Atlantic Treaty Organization allies began their troop drawdown and the Taliban launched the spring offensive that led to its nationwide triumph.

The reality behind those horrific statistics was writ small here in Kulangar, whose little bridge, over a dried-up stream, connects one side of the village to the other — but divided warring forces.

"On one side of this bridge you had the Taliban, on the other the government, so there was always trouble," Ahmad said.

The fighting over the years was sometimes so intense that sending children to school was a daily gamble. Raihan, the man who was getting his bike fixed, recalled the morning in April 2018 when his two young brothers, ages 7 and 8, and their 2-year-old cousin, Mustafa, were hit by a mortar shell while cutting across a field to get to school.

"Their backpacks and books were scattered all around. One of them, his arm was cut, another the leg. Mustafa, his face was so damaged I couldn't even recognize him," Raihan said, holding up a picture of the three dead children.

Although Kulangar is no longer a battlefield, a new crisis now threatens the village as well as the rest of the country. The Taliban's takeover has upended international assistance programs for Afghanistan, a cataclysm for the aid-dependent country. As international organizations try to figure out how to work with the new rulers amid a raft of U.N., U.S. and European sanctions, poverty and the cost of food are both soaring.

The price of flour, for example, has more than doubled, exceeding 2,200 afghanis — about $25 — for a 110-pound bag, said Samis, a wheelbarrow porter in the produce market in Khair Khana, a suburb north of Kabul. Like many Afghans, he goes by only one name.

Meanwhile, a cash crunch means that people can barely afford to buy anything, said Mohammad Zaman, 52, a fruiterer who was tending to the makeshift stall he had set up on the highway divider.

"We buy these grapes for 100 afghanis a bag in the morning," he said, pointing to an array of bagged grapes on the ground. "By the time evening comes, I haven't sold any, and I have to sell them for 50. It's just a loss."

At a high-level ministerial meeting on the worsening humanitarian situation in the country, U.N. Secretary-General Antonio Guterres warned that Afghans were "facing the collapse of an entire country — all at once."

"After decades of war, suffering and insecurity, they face perhaps their most perilous hour," he said. "Now is the time for the international community to stand with them."

At that meeting, international donors pledged about $1 billion in aid for Afghanistan, although it remains unclear how — and more importantly to whom — that money would be disbursed.

Ahmad, the Kulangar resident, said he was unconcerned with who was in charge in Kabul, so long as peace would last and there was some work.

"We are poor people and don't think about these things," he said.

"All that we care about is how to make money and get food for our family."