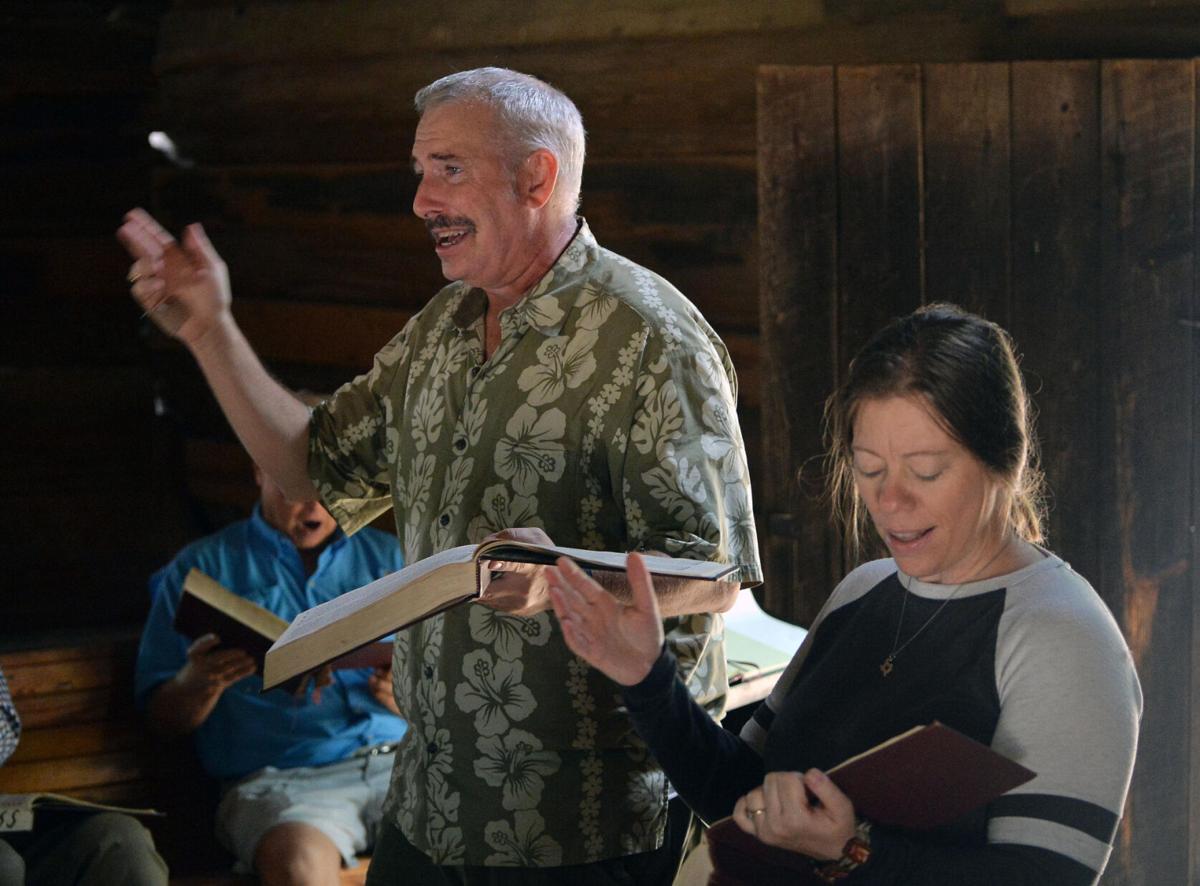 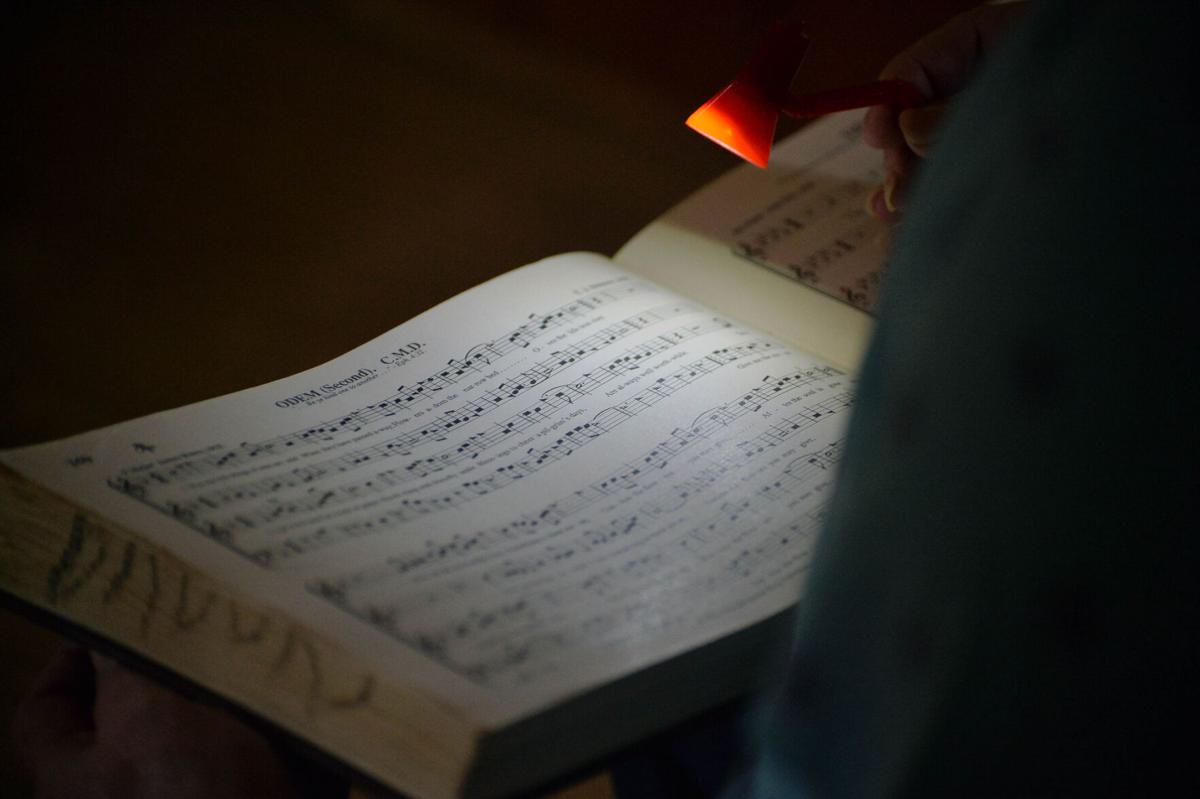 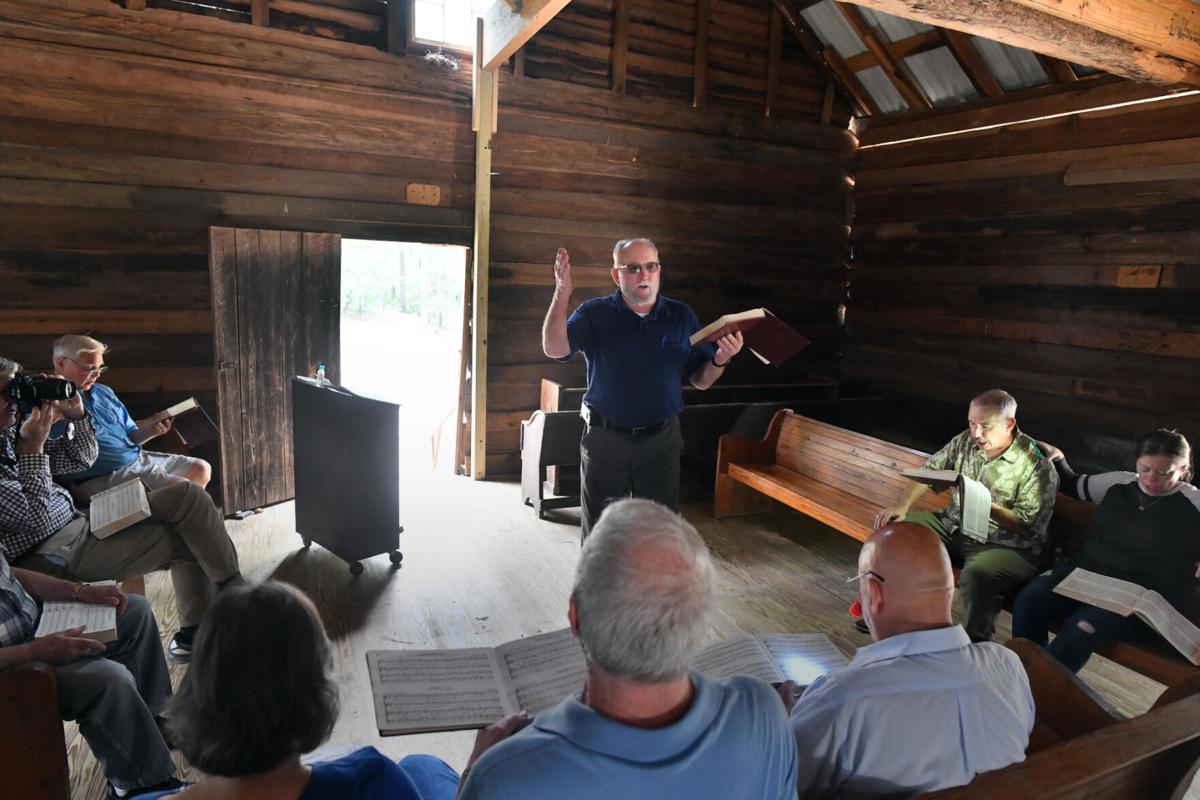 The singers, and a few listeners, inside the old Cleburne County sanctuary numbered at about 30. Most sang hymns that influenced the faith of Christians before America became a country, songs from rural England that became popular in New England and spread to the rural South. The singing is a capella.

At all Sacred Harp gatherings, the singers carry the melody and harmony, on the first verse, by ascribing the shape of the written notes with the pitches of notes on the musical scale. The subsequent rounds of each song are sung with words. Many of the hymns are familiar ones, such as “Amazing Grace.”

Other characteristics of this type of singing are the song leaders’ arm pumping up and down and a tapping on the wooden floor of a foot to keep the rhythm.

To keep the singers safe, and to keep the building in good repair, the floor at Shoal Creek Church has been reconstructed out of newly laid boards which have a new moisture shield beneath them. Above the singers, a speaker pointed out, are a few new rafters, a type of strong wire and a giant beam. The additions represent an attempt to keep the walls from falling outward.

“When the Internet, The Anniston Star and the News Journal spread the word about the building’s need for preservation,” Jane Borden Sanders said to the crowd during a break in the singing, “the money started coming in without even asking.”

Sanders is a retiree whose ancestors on both sides of her family helped build the current structure back after its destruction twice before.

Sanders got involved with the building when it landed on the Places in Peril list of the Alabama Historical Society. She helped spread the news about the building’s deterioration. Many others became involved, and, after about $15,000 came in, workers proceeded with the project. It has taken about a year to complete.

“One of our biggest contributors is a California woman whose mother was from the Edwardsville area,” Sanders said during a break. Afterward, the hymns were sung — if not always in tune, always in the Spirit.

During the lunch break, Cecil Roberts expressed disappointment in the crowd, which, in years past, has overflowed the singing-room building.

“The covid has many people nervous,” said Roberts, chairman of the singing for the past three years.

Outside the building, on nearby grounds, is a cemetery with monuments and crude stone markers that date back to pre-Civil War days. The grounds, studded with pine trees, are owned by the National Park Service, which helps keep the building clear of nearby foliage that could catch fire and cause the building itself to burn down. Closer to the church is a covered set of picnic tables, which on Monday were covered with dishes of fried chicken, vegetables and desserts for an old-fashioned “dinner on the ground.” That is a name most old-timers used, even after churches built outdoor tables to elevate the dishes from a tablecloth spread on the grass.

Two listeners in the crowd were Kelly and Cynthia Cross of Jacksonville. Kelly came to remember his father and a son, both of whom recently died. He faced the pain of his memories with bravery, as he haltingly mentioned the most recent loss of his son. Both were on his mind.

Kelly Cross came to the Shoal Creek Church last year, even though he could not enter the building due to construction. He came to think and to grieve.

“All my life, I have been to a family reunion in Andalusia in a little place called Pleasant Home Baptist Church,” Cross said. “There is a singing there on Father’s Day. My daddy loved it, and I brought him here in 2017 and 2018. He died in 2019.”

Before the singing resumed, one of the leaders read from the Bible and encouraged the crowd to stand in honor of those who are sick, shut in and experiencing grief.

“First Thessalonians 4:14,” he said. “For we believe that Jesus died and rose again, and so we believe that God will bring with Jesus those who have fallen asleep in him.”

“Amen,” said others in the crowd.