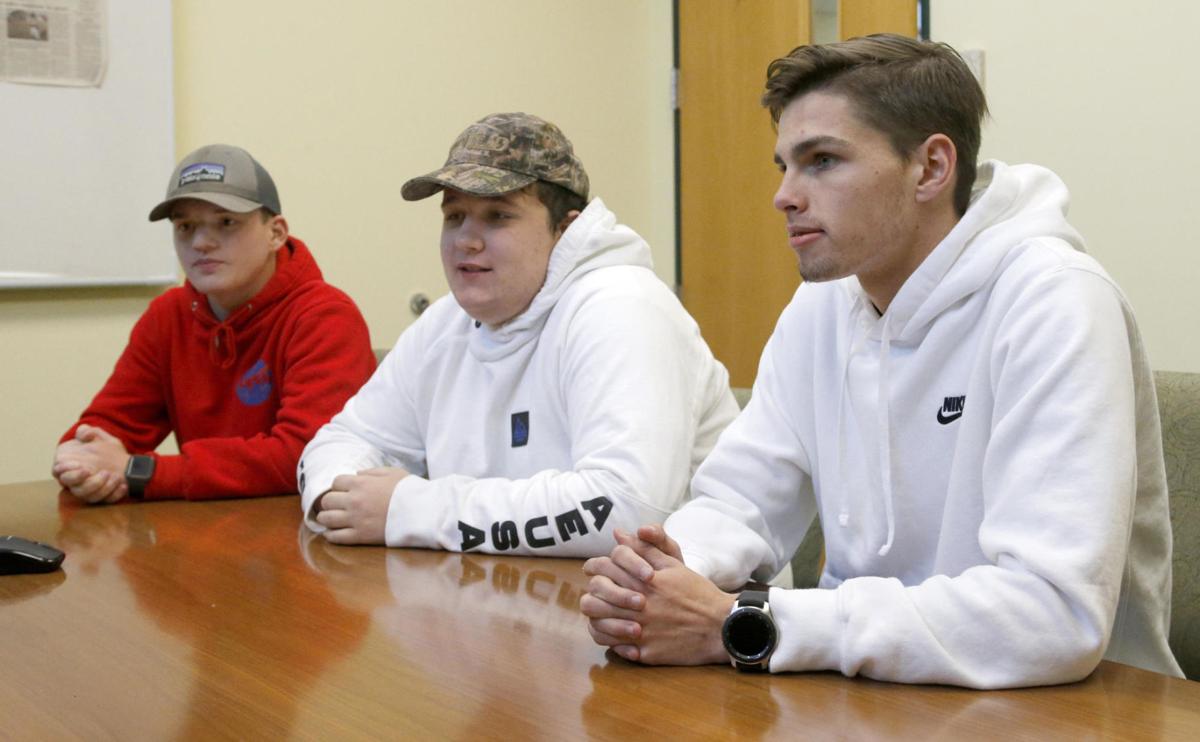 From left: Cody Waller, Jackson Lewullis and Dillon Busby, producers of videos that led to the arrests of two men Thursday, visited The Star for an interview earlier in the day. 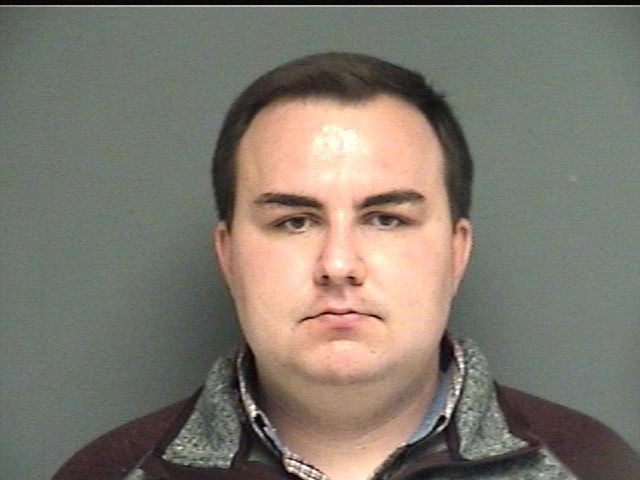 Three Calhoun County teenagers whose YouTube videos led to the Thursday arrest of a school choir director and another man say they plan to do it again.

Dillon Busby, Jackson Lewullis and Cody Waller, all 18, said they created the “Hive vs. Predator” YouTube channel for the purpose of finding sexual predators in the community and exposing them. Law enforcement officials have applauded the trio’s initiative, but noted that what they’ve done could be dangerous and detrimental to an actual criminal investigation.

A video uploaded to the channel shows the three publicly confronting the teacher in the Lenlock Wal-Mart after they posed online as a 17-year-old boy and agreed to meet him for sex.

The video, titled “HE RAN FROM US!!”, also shows photos of the teacher and screenshots of the messages he sent to them.

Deputies charged Bradley Lamar White, 27, of Jacksonville, with distributing obscene material to a student and engaging in sexual contact with a student younger than 19 as a school employee, both Class A misdemeanors.

According to Wade, White was a choir director for Alexandria Middle and Alexandria High schools before he resigned Tuesday.

According to the TimesDaily newspaper in Florence, White resigned in March 2018 from his position as the Florence High School’s choir director, nearly two months before the end of the school year. Attempts to reach Florence City Schools for more information on Wednesday were unsuccessful.

White’s attorney, Bill Broome, said he turned himself in to deputies, but declined to comment further.

Wade said deputies also on Thursday charged a 23-year-old Jacksonville man with electronic solicitation of a child, a Class B felony.

According to Wade, the three teenagers confronted the man in another video under similar pretenses. Wade said the man was charged with a felony because he was led to believe he was soliciting a 14-year-old. The age of sexual consent in Alabama is 16.

The Star typically withholds the the identities of those charged with sex crimes, until they are convicted or plead guilty, as the stigma that can accompany such charges can linger even if the charges are dropped or the suspect is exonerated.

An exception was made in identifying White because of his job as a teacher and his responsibility for schoolchildren.

Wade said what the three teenagers did was legal, but very risky. He said he was concerned that they did not know who they were confronting and what that person was capable of.

“Somebody that’s got nothing left to lose can be very dangerous,” Wade said. “Mr. White could have had a gun or could have run over them.”

Busby, in an interview The Star conducted with the three men on Thursday, said the potential dangers definitely crossed his mind after the trio started “Hive vs. Predator.”

“We made sure that we did everything as safely as possible, but I feel like there could have been more precautions that we could have taken,” Busby said. “Whenever we were in the moment, we weren’t thinking about that. We were thinking about getting this guy off the streets.”

Busby, an Oxford High School student, said they haven’t pursued some of the people who messaged them because they’ve asked to meet in an unsafe area, like their own homes or a rural area.

“We don’t meet anybody unless all three of us are comfortable and we all know what we’re doing,” Busby said.

‘Lay low for a minute’

Busby said he, Lewullis and Waller went to the police a week ago about their communications with a man they had connected with online.

In the videos, which show their confrontations with two other men, the three promise the alleged “predator” that they won’t contact police if he answers their questions.

The day after the second video uploaded, Busby said, police contacted them. Busby said the three knew “100 percent” that police would become involved.

The three said they planned to make more videos. But because police warned them that someone could retaliate against them, they said, they wanted to “lay low for a minute.”

“After this blows over, then we’ll start again,” Waller said.

If deputies had known about the exchanges between White and the teenagers before the videos were posted, Wade said, more serious charges may have been filed against him.

Often times, Wade said, when officers are dealing with situations such as these, they rely on the “element of surprise.”

“He even says in the video he’s deleting his account,” Wade said. “Getting your evidence before they even know that you’re onto them is always better.”

‘Put an end to that’

While Wade doesn’t condone the teenagers’ actions, Wade said, he applauds their bravery and ingenuity.

“They did expose two pedophiles in our community,” Wade said. “What can you say to that, except ‘Bravo?’ Way to go, gentlemen.”

Hopefully, Wade said, the teenagers will consider careers in law enforcement once they get older.

“If those young people have a sense to be in the criminal justice world, I tell them to come apply,” Wade said.

Busby said the three were hanging out one night when they came up with the idea.

The three said they were inspired to start the channel by another YouTube channel, “Predator Poachers,” and Chris Hansen, the host of the Dateline NBC segment, “To Catch a Predator.”

Lewullis, a recent Saks High School graduate, said he also had a relative who was sexually abused as a child. He said he is unsure if the child’s abuser was ever prosecuted.

“It was really difficult to see a child go through that, and it makes you want to put an end to that,” Lewullis said.

The three said they spent the past week or so using the dating apps Tinder, Grindr and Bumble to make fake accounts, posing as younger teenagers.

Once they matched with users, they said, they messaged them and included numerous times in the exchanges that they were between the ages of 14 and 17.

“We make it very clear that the person they’re talking to is underage,” said Waller, who identified himself as a student but declined to say where.

The three said many responded by blocking their accounts or reporting them. Unfortunately, they said, a lot of people continued messaging them after they lied about their ages.

To make their messages convincing, they said, they used an explicit photo pulled from a pornographic website and cropped it to make it look like it was sent by a teenager.

Busby said he’s in charge of editing the videos. He said he uses messages from the apps and photos of the alleged “predator” as part of the videos’ introductions, but includes the entire video from the confrontation.

‘Making a little bit of a difference’

The video involving the teacher has been widely circulated around the area since it was posted Tuesday. Busby said the video has reached nearly 20,000 by Thursday. However, Busby said, the clout isn’t what they did it for.

“We know that we can’t, just us three, make the world a better place, but at least we’re making a little bit of a difference,” Busby said.

Still, Lewullis said, it feels good when they see the comments from community members who thank them for their efforts.

“For us to be able to do that and have people feeling a little bit safer and have somebody like that exposed means a lot to us,” Lewullis said.

Wade said deputies were working to find evidence indicating whether White has abused actual children before.

“We don’t have any direct evidence that there is,” Wade said. “We can only opinionate that this isn’t the first time.”

He encouraged anyone who may have been victimized by White to contact law enforcement.

If a student victim doesn’t feel comfortable talking to police, he said, they are urged to talk to their school’s guidance counselor.

According to Wade, White’s arrest means that he will likely be barred from being around groups of children ever again.

“There’s plenty of willing adults in the world. Why do you have to use children?” Wade said. “If I know about it, there is no cover up. There is no passing him along to somebody else."

A judge on Monday turned the case of a man charged with several sex crimes after a YouTube video implicated him over to a grand jury for review.