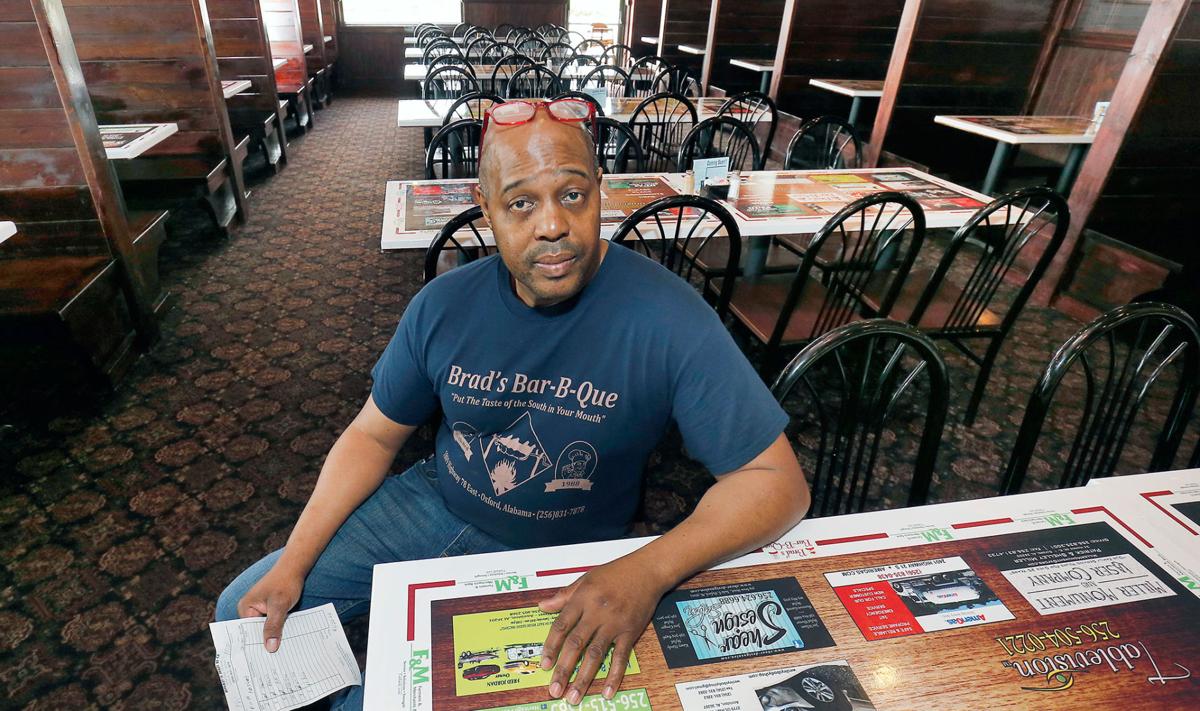 William Bradford, owner of aBrad’s Bar-B-Que in Oxford: “A lot of employees don’t want us to close, but we have to. We can’t operate on 40 percent.” 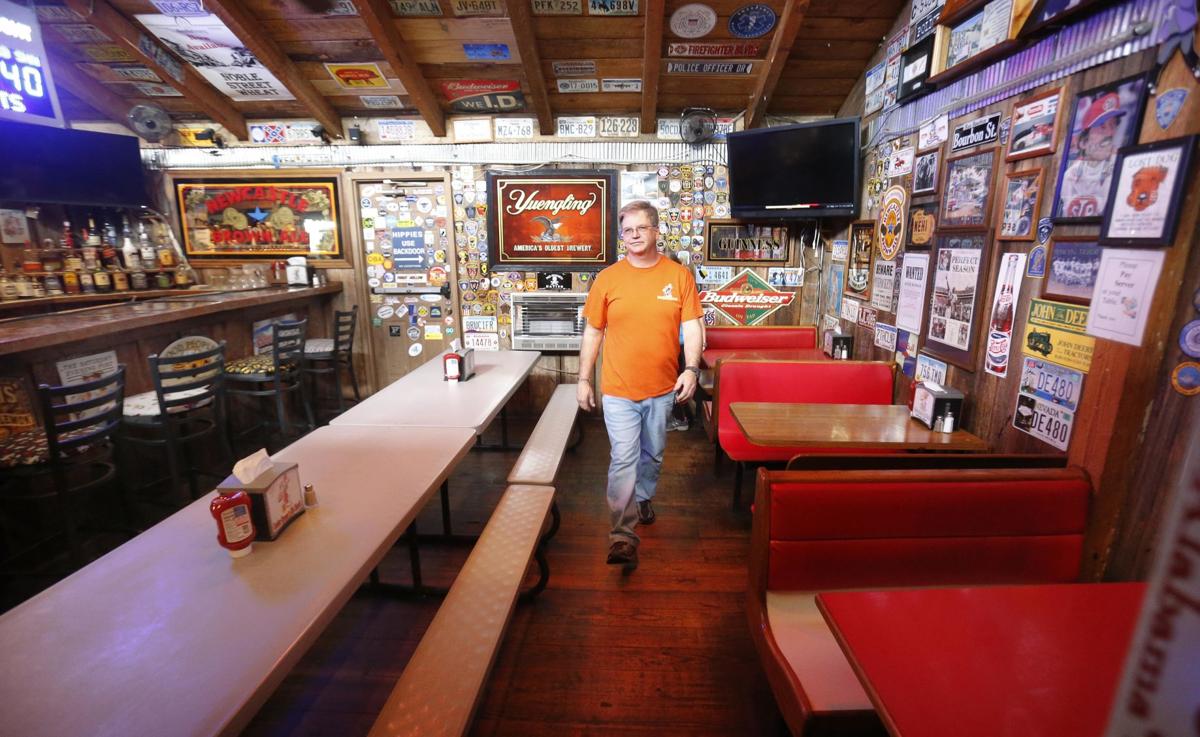 Owner Tim Johnson walks through the empty dining room. Cooter Browns in Jacksonville, like many other restaurants, are still open but for take out orders only. (Photo by Trent Penny/The Anniston Star)

William Bradford, owner of aBrad’s Bar-B-Que in Oxford: “A lot of employees don’t want us to close, but we have to. We can’t operate on 40 percent.”

Owner Tim Johnson walks through the empty dining room. Cooter Browns in Jacksonville, like many other restaurants, are still open but for take out orders only. (Photo by Trent Penny/The Anniston Star)

Stephanie Parker of Anniston knew there was a virus going around before this week, but she had more important things to worry about.

“My son was in the hospital for 39 days in Birmingham,” she said.

Parker’s 5-year-old was being treated for numerous conditions, including the flu, pneumonia and Kawasaki disease, which caused swelling in blood vessels throughout his body.

Before she left for the hospital, she said, she filed for a leave of absence from Home2 Suites by Hilton. When she returned to work there on Tuesday, she said, she was let go. With the global coronavirus crisis halting most travel, the hotel didn’t have enough hours for her to work. Now, Parker said, she’s stressed, but trying to stay positive.

Luckily, she said, her partner, Robert Jaimes, is still working construction jobs in Atlanta. But Jaimes said he’s seeing more and more of his work sites close down.

“You just hope everything goes back to normal soon,” Jaimes said as the two loaded a stove onto his truck outside their home on Coleman Road.

Coronavirus shifted from distant concern to immediate crisis for many Alabama workers Thursday afternoon, as state officials announced restrictions on bars and restaurants intended to prevent the spread of COVID-19. This week, many workers, like Parker, began to feel the economic pain wrought by the coronavirus.

LAID OFF? HOW TO GET HELP

The Alabama Department of Labor announced this week that people out of work due to COVID-19 can apply for unemployment benefits. The offer is open to people who:

To apply, go to www.labor.alabama.gov or call 1-866-234-5382. (The Labor Department reported problems with online filing Friday, but said via Twitter that it is working to fix those problems.)

The state reported its first case of the virus on the morning of March 13. A week later, 106 Alabamians had confirmed cases of COVID-19.

Between Monday and Friday, 7,821 people applied for unemployment in the state, said Tara Hutchison, spokeswoman for the Alabama Department of Labor. Only 1,675 had filed in the previous week. Hutchison said the state’s website for filing unemployment claims was slowing down due to the volume of traffic.

More than 182,000 Alabamians were working in some portion of the food services industry in January, according to Labor Department figures.

An order issued by Gov. Kay Ivey and the state health commission on Thursday, among other things, prohibited bars and restaurants from serving customers except through delivery and takeout.

The impact was immediate on restaurants, already seeing slow demand as customers heeded warnings to stay home, and on workers.

William Bradford, the owner of Brad’s Bar-B-Que in Oxford, said Thursday he had to lay off most of his servers, bussers and dishwashers. He said he plans to serve to-go orders through Saturday.

After then, he said, he’s closing Brad’s Bar-B-Que down.

“A lot of employees don’t want us to close, but we have to,” Bradford said. “We can’t operate on 40 percent.”

Bradford said many of his employees, who were in their 30s and 40s and had homes and families, were upset about the layoffs. He said he’s going to pay his full-time employees for two more weeks of work, as required by law, but his part-time employees will have to immediately file for unemployment.

“I hope the government compensates these kids, because this is ridiculous,” Bradford said.

If the virus and mandatory shutdowns “blow over” within one or two months, he said, they’ll have their jobs back. After that, he said, there’s no guarantee Brad’s Bar-B-Que will ever open again.

Tim Johnson, the owner of Cooter Brown’s Rib Shack in Jacksonville, said Thursday he felt horrible letting 14 employees go, but they’ll likely draw more money from unemployment benefits than they had made in the last week.

“I think they kind of expected it once the order from the governor and the health department came down,” Johnson said.

According to Johnson, this is the first time he’s ever had to lay workers off like this.

Johnson said April 3 will mark the 20th year in business for Cooter Brown’s. He had initially planned to celebrate, but that will have to be postponed.

“We had planned on having a big to-do of all-day specials and people coming in and out all day,” Johnson said. “It’s just not going to be worth it at this point.”

Johnson said Thursday was a busy day for to-go orders. He said he fully expects his sales to drop, but if to-go the restaurant stays busy with to-go orders, he said, he expects it will stay afloat.

“It’s going to be tough for everyone,” Johnson said. “We’ll do what we can. That’s all we can do.”

One local restaurant server, who asked that his name not be used due to concerns that he might be fired, said the new takeout approach was costing servers money. Takeout customers, by and large, are not tipping, which cuts into a server’s expected income, the server said.

Charlotte Hubbard, owner of the cafe Hubbard’s Off Main in Oxford, said she has cut staff hours since the governor’s orders. Before the order, there were typically two servers working the lunchtime shift. Now there’s one server taking orders by phone, with Hubbard doing deliveries.

“I have servers who have second jobs,” she said. “I'm trying to keep the servers who don't have another income and the ones who pay their own rent.”

Hubbard said she can remain in business for perhaps another two months under these conditions — but she’s quick to note that she lives at the cafe and has an income as a retired teacher. She said she doubts other businesses could last so long.

Hubbard, who also serves on the Oxford City Council, said state government could help by forgiving some of the tax restaurants would otherwise pay, giving business owners a cushion for their losses.

For workers in other sectors, there may be more of a safety net, and less impact than initially feared from the governor’s orders.

At Calhoun County’s largest employer, Anniston Army Depot, officials announced Friday morning that some workers were already telecommuting, while others, deemed “high-risk” could soon be sent home on “safety leave” if telecommuting is not an option.

The depot repairs and refurbishes armored vehicles and small arms for the Army.

It’s unclear how many workers could be sent home, but Charles Barclay, president of Local 1945 of the American Federation of Government Employees, said he believed safety leave would be paid leave, at least for direct federal employees, if it’s approved by the commander.

“Some people are very scared out there,” Barclay said. “But we’re still blessed that we have a job — compared to a lot of places in the United States. We're getting paid on time."

The state earlier in the week announced that people laid off because of the coronavirus could file for unemployment and waived some employer charges for filing claims. Congress this week was also mulling a $1 trillion aid package that could include direct cash payments to affected workers; but when that aid might arrive and in what amounts was, on Friday, anybody’s guess.

Regina Pope, who was leaving her apartment on Christine Avenue to go to work at Concord Custom Cleaners, said she’s now working three days a week.

“Right now, to keep everyone employed, we were asked to take days off,” Pope said. “We’re rotating taking days off.”

Pope, who already worked part time before the pandemic started, said she lives “paycheck to paycheck” and is now fearful of getting evicted from her home.

“Will I be able to pay my rent and my insurance for my vehicle?” she said, preparing to walk to work. “I use one check to pay my rent. The next check covers my utilities and my income.”

One Jacksonville restaurant owner said Saturday he had his staff grilling outside to try to grab attention. His employees’ jobs were on the line, he said. With a statewide ban on serving on-site, many local eateries were ad-libbing.