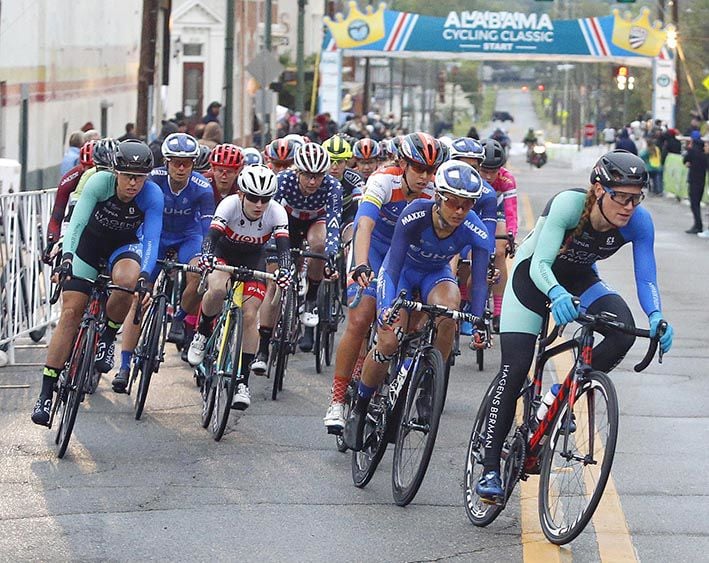 Racers head through turn one during the 2018 Sunny King Criterium women's pro race in Anniston. Event organizers announced Sunday that this year's Alabama Cycling Classic has been postponed because of the COVID-19 coronavirus pandemic, 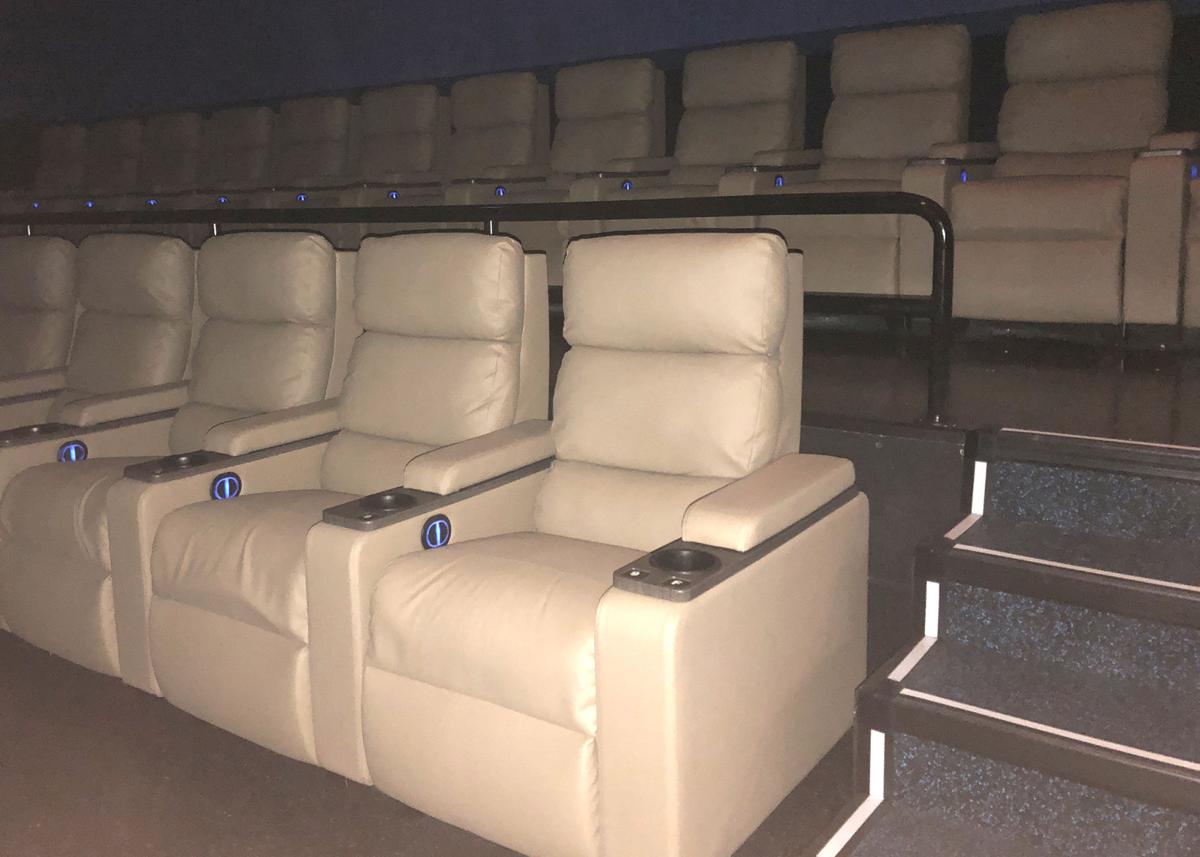 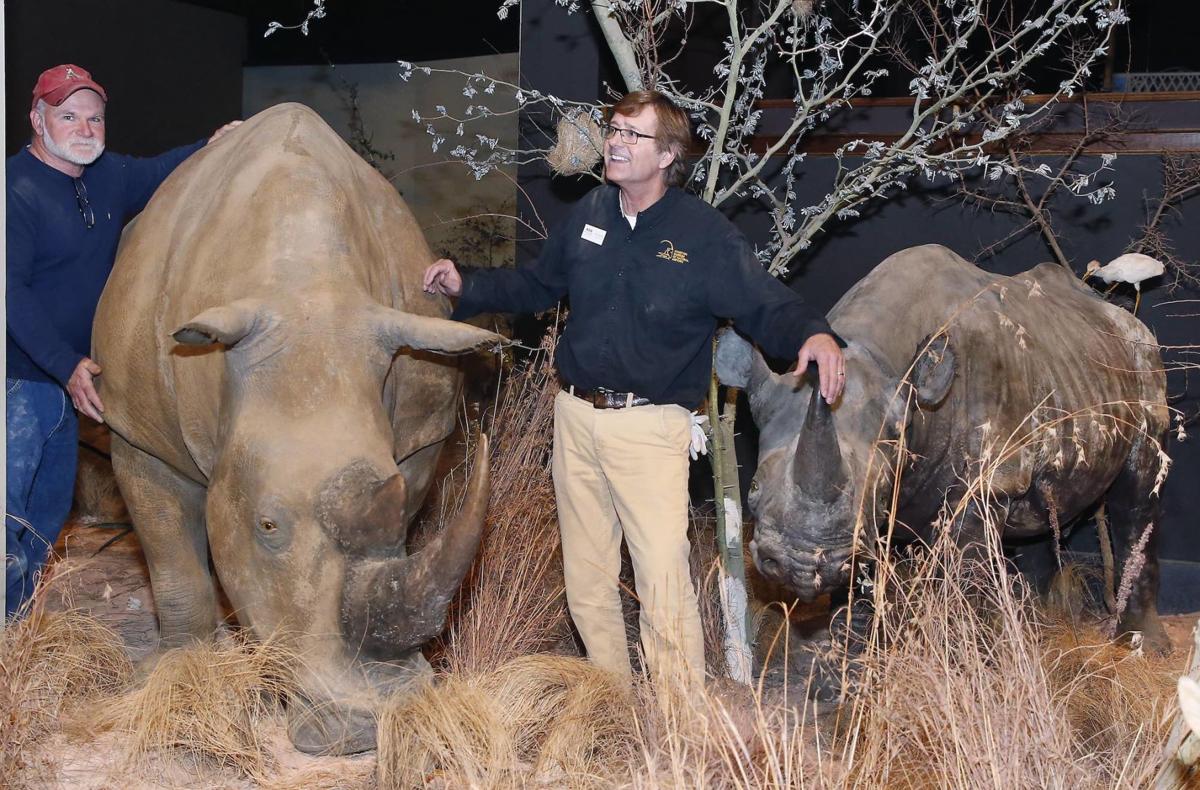 John Parker and senior curator Dan Spaulding put the finishing touches on a rare white rhinoceros that they just placed on display at the Anniston Museum of Natural History. Photo by Stephen Gross / The Anniston Star 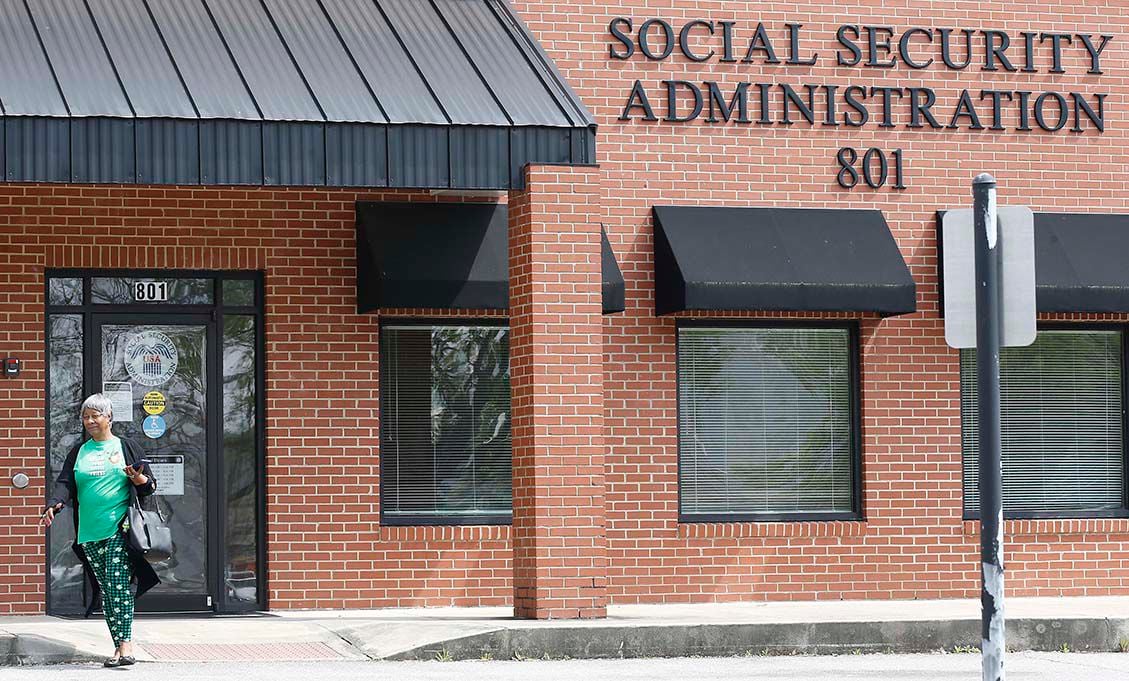 The following is a partial list of area events that have been canceled or postponed due to concerns over the novel coronavirus.

• The Public Library of Anniston-Calhoun County will close April 4 at 5 p.m. in compliance with the stay-at-home mandate. They will open at 1:30 p.m. to serve the public on a walk-up basis. Please place your order now at books@publiclibrary.cc for any materials you would like to pick up between 1:30 -5 p.m. Books, audios, jigsaw puzzles, video games, DVDs. All materials currently checked out will be due on May 5.

• The Cheaha Challenge & ULTRA, Chief Ladiga Cruise, and Time Trial, originally scheduled for May 16-17, has been cancelled. Organizers are in the process of setting up a virtual ride on May 17 at 8 a.m. for those interested.

• The City of Oxford has started a website, OxfordStrong.com, which includes listings of which restaurants, groceries and pharmacies are open and when.

All City of Anniston parks remain accessible, but all playground equipment is off limits to the public until April 30.

The Anniston Museums and Gardens will remain temporarily closed through at least April 30. City staff will maintain phone lines at all facilities from 8 a.m.-5 p.m. Mondays through Fridays.

Residents can make online payments for sanitation, traffic citations, business licenses, and planning permits at the city’s website: https://bit.ly/2Uux6dQ. Payments may be made in-person by appointment by calling Finance Director Julie Borrelli at 256-231-7780. Payments may also be made by phone, 10 a.m.-2 p.m. Mondays through Fridays by calling 256-231-7780.

Public services such as brush pick-up, works orders, inspections, etc. will remain available, according to the announcement.

• Creekside Market arts and crafts festival at Bennett Farms in Heflin, originally scheduled for April 17-18, has been moved to June 12-13.

• The Welcome Neighbor Dinners for April and May have been cancelled. A project of Interfaith Ministries, these were potluck dinners designed to bring people of different faiths and backgrounds together.

• The Facebook group "Calhoun County Area Take Out & Delivery Options Amid COVID-19" is sharing information about which restaurants are still open for take-out and delivery, as well as menu options.

• Registration for the annual Sunny King Charity Classic golf tournament has been moved from April 1 to May 1.

• The Calhoun County Commission announced March 25 that county offices will be closed through at least April 6. The commission's March 26 meeting has been canceled.

• The Alabama National Guard is closing access to all its installations and facilities to members of the public, including Fort McClellan, according to an announcement from the Guard. Access will be restricted to current Alabama National Guard employees, service members, state employees, federal technicians, and contractors until further notice. This includes access to gyms, fuel pumps, Department of the Army photo labs, I.D. card offices, and other non-essential services.

• The Farmers Market of Jacksonville is postponing its opening until further notice.

• The YMCA of Calhoun County downtown Anniston facilities will close to the public effective March 20 at 7 pm. The Oxford YMCA Program Center will close March 19 at noon. The temporary closure will last at least through April 3. In addition, the Y announced, "To best support our community, we are shifting our resources to respond to the needs of those working on the front lines of the virus by offering childcare to medical staff from our local hospitals. This decision means that we are no longer able to provide School’s Out Fun Days to our program members as scheduled the week of March 23-27. If you are currently enrolled in SOFD, or in any program scheduled during our temporary closure, please know your account will be credited toward future programs." YMCA members are being offered MOSSA MOVE digital workouts free for 60 days; for info, email annangell@ymcacalhoun.org. Several YMCAs across the nation have also teamed up to create www.ymca360.org, a YouTube Channel with health and fitness videos.

• The Oxford Senior Center is closed and senior activities at all of the Oxford community centers are cancelled until April 6. Homebound meals will continue to be delivered.

• All activities sponsored by the Oxford Parks and Recreation Department have been suspended until April 6. Oxford Civic Center and community centers will be closed to the public, but walking tracks and outdoor areas will be open. The Oxford Batting Cages, located next to the Oxford Lake Softball Complex, are still open as of March 19 but are limiting the number of patrons at any given time. Call 256-847-5018 to check if it is OK to arrive now or later.

• The AmStar movie theater at Quintard Mall in Oxford announced it is temporarily closing on March 18 after the final showtime of the day. ReelRewards members will be granted extensions on their accounts; for more information, visit amstarcinemas.com.

• All local Social Security offices are closed to the public as of March 17 to protect "older Americans and people with underlying medical conditions" and employees during the pandemic, according to the federal agency. Local offices will provide critical services over the phone, and online services are available available at socialsecurity.gov/onlineservices, including applications for retirement, disability, and Medicare benefits; customers can also check the status of an application or appeal, request a replacement Social Security card (in most areas) or print a benefit verification letter. Answers to some common questions are at www.socialsecurity.gov/ask.

• Jacksonville Public Library will be closed until further notice. If you need to return items, you can drop them in the outside book drop or you can renew by phone (256-435-6332) or online @ https://jacksonvillepl.bywatersolutions.com/. The library will not charge overdue fines during the closure. In the meantime, you can get free e-books, audio books & magazines on the Libby app & books for kids through Tumblebooks (link on the website).

• The Public Library of Anniston-Calhoun County building will be closed March 17-April 6 and all library events are cancelled through April 6. The library will provide Curbside Assistance to patrons wishing to check out books, make printouts, send faxes, make digital scans or make copies. Visit the library's website or Facebook page for details, or call 256-237-8501 option 2. WiFi can be used in the library parking lot; connect to AnnistonLibrary and accept the Wireless Access agreement.

• The Oxford Public Library is also offering Curbside Service starting March 17. Visit the library's website for ways to order books for check out. In addition, an Internet Cafe has been set up in the Community Room for those that need access to WiFi; patrons should use the side entrance. Library fines will be waived for items checked out during March and until two weeks after library operations return to normal.

• CAST community theater spring productions of "Clue" and "My Fair Lady" are postponed but will be rescheduled.

• All Anniston Municipal Court sessions through April 22 will be canceled, the city announced Monday. That includes all court-ordered driving school classes and shoplifting classes. Anyone scheduled to attend court before April 22 will be rescheduled for a later session according to the announcement. All other normal operations of the court will continue: Warrants may still be obtained through the normal procedures; payments will still be taken at the window, via mail and online; motions and other filings will still be accepted; magistrates will continue to be available via phone, email and in person. Anyone with questions can contact the court at 256-231-7614, the announcement said.

• The Craig Morgan concert at Oxford Performing Arts Center, originally scheduled for March 21, has been rescheduled for Aug. 28. OPAC is keeping a running list of concert postponements and reschedules at www.oxfordpac.org/advisory.

• The Donoho School's performance of "Peter Pan Jr.," originally scheduled for March 19-20 at Oxford Performing Arts Center, is postponed and will be rescheduled. OPAC is keeping a running list of concert postponements and reschedules at www.oxfordpac.org/advisory.

• The Oxford Community Chorus Spring Concert, originally scheduled for April 16 at Oxford Performing Arts Center, is postponed and will be rescheduled. OPAC is keeping a running list of concert postponements and reschedules at www.oxfordpac.org/advisory.

• The Public Educational Seminar on COVID-19 has been cancelled. In its place, the city is producing educational videos which will be released soon.

• City of Anniston Parks & Rec spring sports programming is postponed until the third week of April, at which the situation will be reevaluated, the City of Anniston announced in a press release March 15.

• Something to Do Sunday is postponed and will be reevaluated in 30 days for rescheduling.

• Ruff & Roll 5K Walk/Run has been cancelled and refunds are being assessed. A rescheduled date will be announced later.

• Anniston Police Department annual Easter egg hunt has been cancelled. If rescheduled, an announcement will be made.

• The Anniston Senior Citizen Center and Therapeutic Recreation Center will cease operation on March 17 "to ensure our at-risk groups are properly protected and accounted for," according to a March 15 press release from the City of Anniston. However, the center will be disinfected continuously in order that the following program may continue as scheduled: the Therapeutic Recreation Program, Congregate Meals will continue to be served on a first-come, first-served basis, and Homebound Meal Delivery will continue with no disruption.

• As of March 16, all Anniston Community Centers, city parks, the Aquatic & Fitness Center will remain open for regular operating hours.

• Spring Garden Symposium, Longleaf Botanical Gardens, Anniston. Originally scheduled for March 19, has been postponed to an unspecified later time, according to a release from Anniston Museums and Gardens. Updates will be available at www.ExploreAMAG.org as they are confirmed. Registrants may contact Sarah Burke via sburke@annistonmuseum.org or 256-237-6766 with any questions.

• The Alabama Cycling Classic, which includes the Sunny King Criterium and Noble Street Festival, as well as the Piedmont Criterium, originally set for April 18, has been postponed, organizers announced on the event's Facebook page. "We plan to wait at least three to four weeks in making a more educated decision on either a new date or cancellation for 2020," the announcement read. The bicycle races and street festival draw scores of professional and amateur cyclists and thousands of spectators to one of the county's biggest annual events.

• The concert "An Irish Heart with Chloe Agnew and the Atlanta Pops," originally scheduled for March 14 at the Oxford Performing Arts Center, has been postponed. According to a post on OPAC's Facebook page: "As a result of strong recommendations from public health authorities and due to travel limitations and concerns affecting several guest artists, An Irish Heart (originally set for March 14, 2020) will be rescheduled to a date later this year." OPAC announced it will continue to evaluate future performances, and affected ticket holders will be notified by phone and e-mail.

• Cheaha Creative Arts "An Evening of Fine Arts" scheduled for April 18 has been canceled.

• The Calhoun County Chamber of Commerce announced Monday that all its events for the next two weeks have been canceled. That includes a Tuesday "business after hours" event that the chamber announced Sunday.

• In-person classes and public events at the state's community colleges, including Gadsden State Community College, will be suspended from Tuesday until April 3, the state community college system announced last week.