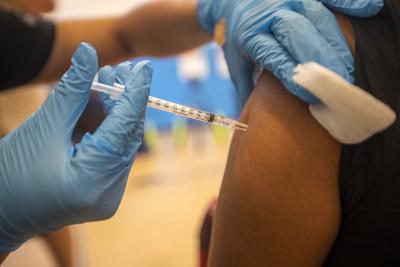 Of the 29 people who have died of COVID-19 in Calhoun County so far this month, 21 were unvaccinated, according to Dr. Almena Free, chief medical officer of Regional Medical Center in Anniston.

“Their ages ranged from 29 to 94 years old,” Free said during a live broadcast via Facebook Wednesday afternoon, part of a community update and outreach effort at the hospital.

Free said there are currently 48 patients with COVID-19 at RMC and Stringfellow Memorial Hospital. Two were in the RMC emergency room, another two were at Stringfellow facilities, while the rest were in RMC’s COVID wards, the third of which reopened last week as new coronavirus cases continued to drain hospital resources.

Infection preventionist Michele Ford said 41 of those patients, about 85 percent, were unvaccinated. Two had been fully vaccinated and five were partly vaccinated.

Free and her fellow doctors covered several topics in the half-hour broadcast, including a note about the likely convergence of hundreds, or thousands, of people at Oxford’s new Big Time Entertainment activity center, which opens next week.

Free recommended wearing masks and social distancing, even outdoors, noting that the delta variant of the virus is much more aggressively virulent.

“COVID is here. I’m going to say right now that it’s here to stay. We’ve got to live with this virus,” she said.

According to Free, UAB Hospital announced it had admitted at least 50 pregnant women who had contracted COVID-19 last week; two died, seven were on ventilators and there were “a number of fetal losses in the second and third trimester,” Free said.

COVID’s harsher symptoms lead to increased complications during pregnancy, including hypertensive disorders and potential premature births, as well as increased risk of death for both mothers and babies.

The American College of Obstetricians and Gynecologists and the Society for Maternal-Fetal Medicine have both suggested vaccination is safe for pregnant people, Free said.

The Centers for Disease Control and Prevention recommends vaccination during pregnancy, according to material on the agency’s website.

UAB hosted a question and answer session available as a YouTube video titled “Pregnancy and COVID-19, Q&A with UAB Doctors,” a 48-minute presentation that includes one doctor’s personal experience receiving the vaccine while pregnant.

Ivermectin not effective against COVID

In a bid to find alternative treatments for COVID, some people have resorted to buying veterinary supplies of the drug ivermectin, Dr. Raul Magadia said while he discussed vaccination myths and current obstacles to viral treatment.

The drug had been used in lab settings early in the pandemic, but failed to create the kind of impact patients needed.

In humans, ivermectin is occasionally prescribed to treat conditions caused by parasitic worms.

The FDA has openly discouraged the drug’s use as self-treatment, first in an article on its website, and again a few days ago.

The FDA issued warnings that the human version of the drug is ineffective in controlling COVID-19, and that the animal versions of the drug are unsafe.

“Some forms of ivermectin are used in animals to prevent heartworm disease and certain internal and external parasites,” reads the FDA page pleading with American citizens to not consume drugs manufactured for nonhuman use in a bid to avoid vaccination. “It’s important to note that these products are different from the ones for people, and safe when used as prescribed for animals, only.”

Even the human-approved versions of the drug can cause problems if not properly administered, the FDA noted.

“You can also overdose on ivermectin, which can cause nausea, vomiting, diarrhea, hypotension (low blood pressure), allergic reactions (itching and hives), dizziness, ataxia (problems with balance), seizures, coma and even death.”