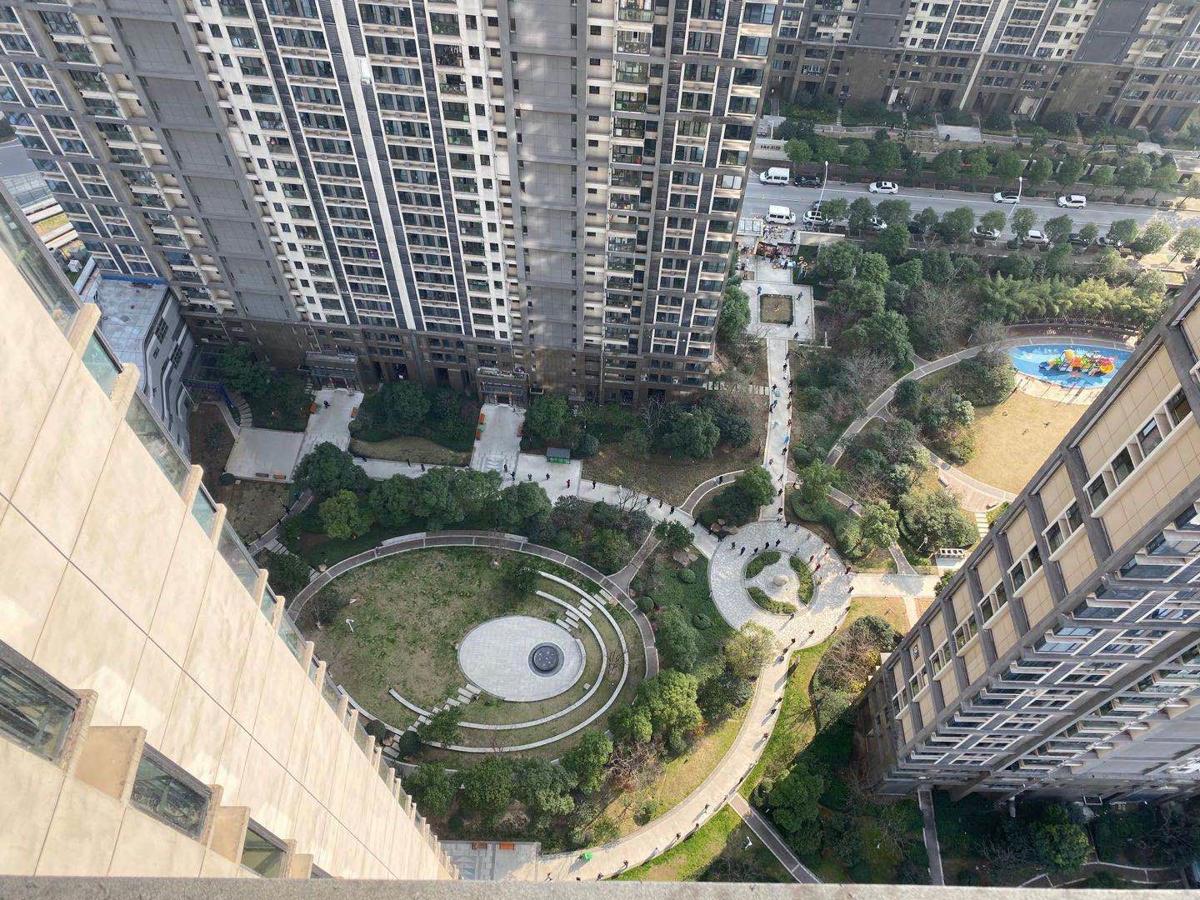 In this photo taken from the Ballards' apartment, people are just visible standing far apart in line in the courtyard below. 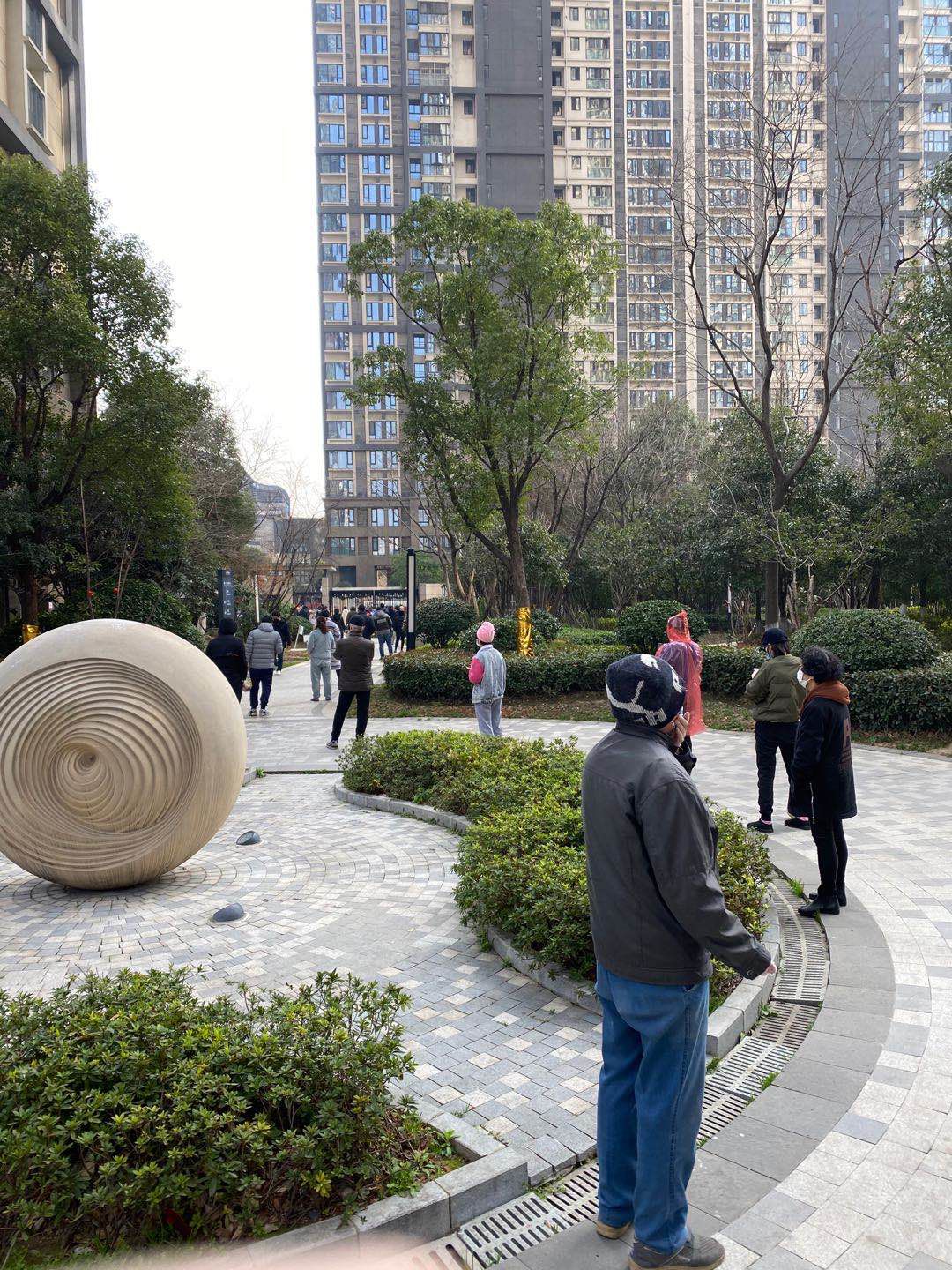 In this photo taken at the Ballards' apartment complex in Wuhan, China, people stand far apart in line for the complex's entrance. 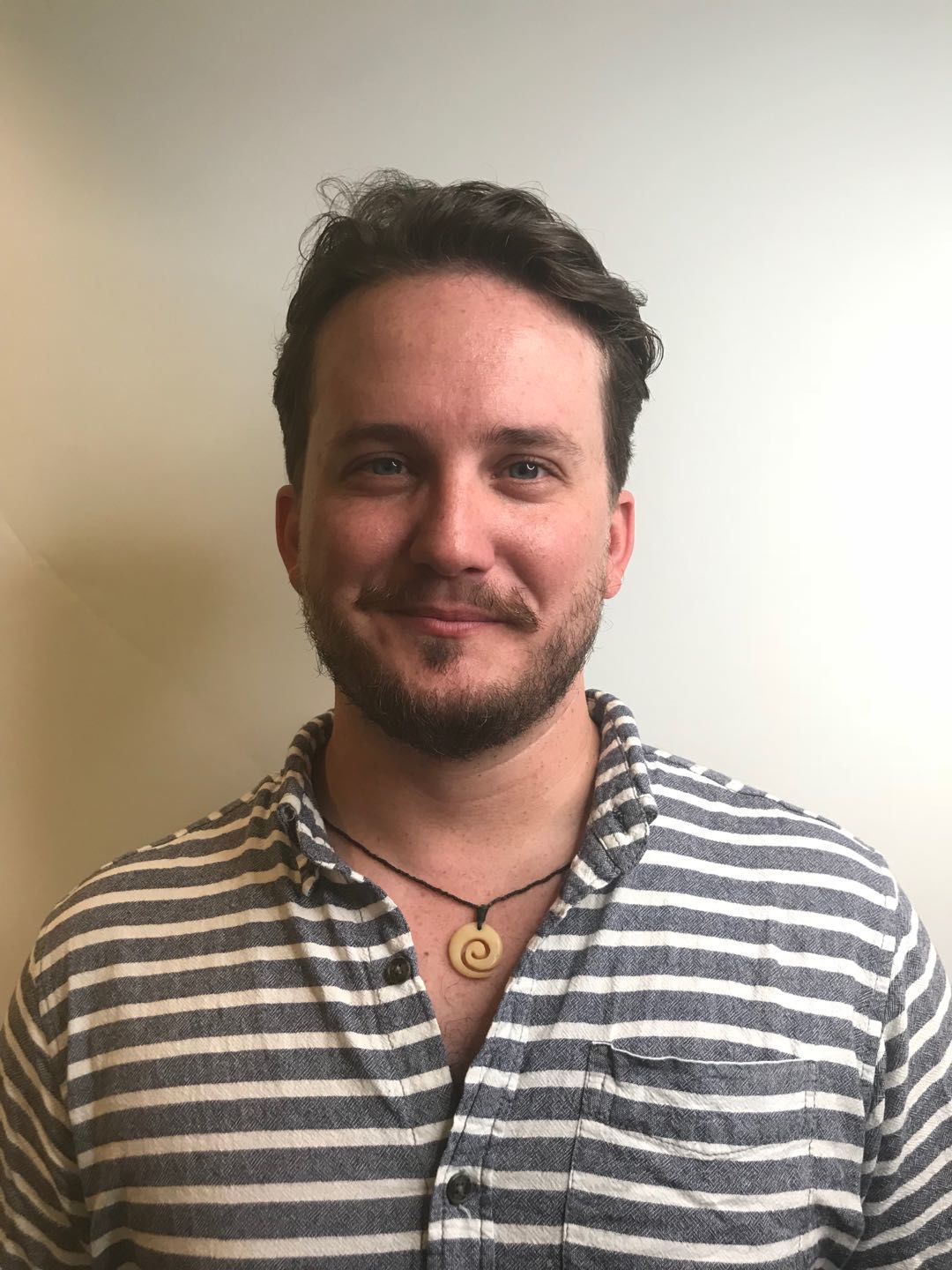 Alex Ballard, an Ohatchee High School graduate, has lived for five years in Wuhan, China, where people are only now beginning to emerge from weeks of isolation because of the coronavirus COVID-19. 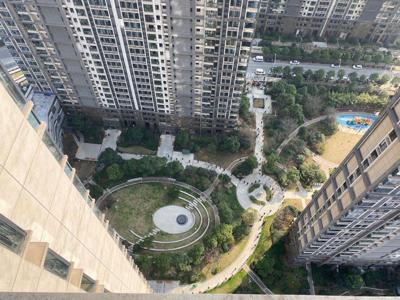 Years before the 33-year-old lived in Wuhan, China, the city in the Hubei Province from which the novel coronavirus sprang late last year, he was an Ohatchee High School graduate living in one of Calhoun County’s most rural corners. Now he lives on the 34th floor of a towering, 53-story apartment building, surrounded by others just like it that overlook highways and office buildings and a cityscape stretching over the horizon from his patio.

He had every intention of leaving Alabama when he was a teenager, he said. Before he settled in China, he traveled to Japan and Germany and a half-dozen other locales. But his roots still show, even after five years teaching high school English in Wuhan.

“I just finished teaching them ‘All Over But the Shoutin,’” Ballard said, referring to Calhoun County author Rick Bragg’s memoir of his mother.

Life in the city hasn’t been so difficult, he said, since COVID-19 led the Chinese government to lock down the city. He works as an instructor at a private academy attended by well-to-do Chinese nationals. He’s still teaching, and students are still learning. It’s all online now, he said, noting that power and internet service and food are all readily available, even plentiful. He’s seen or heard no sign of looting, even though the city is quiet, dark and empty at night.

Jacksonville State University opted to take the same online strategy this week when one of its students was flagged for having possible COVID symptoms, just one day before Alabama’s first confirmed case was announced.

Unlike instructors in Jacksonville, though, Ballard is confined to his apartment building’s courtyard. Its gates, big enough to allow cars through, are blocked off. He hasn’t been paid in a month, either, though the school administration plans to give back pay once the lockdown ends, he said.

“It’s not the school’s fault,” Ballard explained. “You have to have someone deposit paychecks from the school to the bank, but the banks are not open. No one can physically go do it.”

According to the World Health Organization’s daily situation reports, as of March 13, nearly 81,000 people in China have been confirmed to have a COVID-19 infection, and just more than 4,600 have died.

The early stages of COVID-19 transmission didn’t raise any eyebrows in Ballard’s Chinese circle of friends, though. The country had faced outbreaks before and weathered them, he said. In fact, Ballard’s mother, Nancy Ballard, had joined him and his wife, Eve, for what was to be a two-week visit in late January.

“There had been other outbreaks since I’ve been here in 2015 and it seemed kind of like the same thing,” Ballard explained. “Then, suddenly, they locked the city. No one in or out of Wuhan.”

Nancy, an Oxford resident and nurse, said she had expected to be in China for about two weeks. The federal travel advisory to China was at level one when she left, she said, and the situation didn’t seem dire when she roomed with Ballard and Eve.

“We wore masks, we were conscious of keeping our hands clean and using sanitizer and sometimes wearing gloves,” Nancy recalled. “In China it’s just not a big deal to wear a mask.”

The three were visiting Eve’s parents, who live about an hour outside Wuhan, when the lockdown was announced.

“We became confined there for the next 15 days,” Nancy said.

The family made only two trips out during that time, she said; once to get allergy medicine for Eve from a nearby pharmacy, and again when they went up to the apartment building roof to get some air.

“I’m from Ohatchee originally, and live kind of on the country side of Oxford. We’re just outdoor people,” Nancy said.

Nancy was able to secure a spot on an American evacuation flight out of Wuhan Tianhe International Airport through American federal employees, though the process was difficult. Hubei Province is 13 hours ahead of Central Standard Time, and the Americans she contacted worked during the Chinese nighttime.

“We spent a lot of sleepless nights, constantly checking email, checking for phone messages, not wanting to miss that contact,” Nancy said.

Even after she’d been granted a seat on a flight home, the family still had to find a way back into the city. Eve’s father had some pull with a local police force, Ballard said, and he managed to get a temporary pass into the city for a return trip. After dropping Nancy off at the airport, Ballard said, he and his wife simply went back to their apartment.

‘We’re just kind of over it’

Wuhan residents appear to have been calm throughout the lockdown process, Ballard said, though he’s seen evidence of friction.

He shared a video filmed by someone else, of a woman being arrested for not wearing a facemask on the street, which had been mandatory in public areas before people stopped going outside. The worst he’d seen, he said, was video of people blockading their towns and villages from travelers fleeing the city in the early stages of the outbreak. Men with sticks and tools would stand in roadways to stop car and bike traffic, he said.

“I didn’t hear about anybody being killed or anything, just people beat with sticks until they turned around,” Ballard said. “That was probably the worst of it.”

He used a video call function to show off the city at night; it was impossibly quiet for a massive metropolitan area. Lights were off in most of the buildings near Ballard’s apartment. Some normally featured big light displays that were all switched off. A single car drove along a massive highway; Ballard said that was most likely police or emergency services.

He said he didn’t think Calhoun County would be ready for the coronavirus, at least not culturally. Wuhan is a calm city, he said. When the virus started, people flocked to grocery stores. Even in the chaos of shopping for supplies people were unfailingly polite and calm, and the city has a reputation for being safe, Ballard said.

“You’re never in any danger of being assaulted or mugged; murders happen but the victims aren’t random. There’s always some personal motive,” Ballard said. “There are no guns, so you don’t have to worry about that.”

The U.S. State Department’s Overseas Security Advisory Council backs that up, at least anecdotally; a document from April 2019 rates the city’s crime as a “minimal risk” to travelers.

Calhoun County residents, meanwhile, have been victims of social media hoaxes and misinformation about COVID-19 ever since the federal Department of Health and Human Services first announced (and almost immediately canceled) a plan to house coronavirus patients at the Center for Domestic Preparedness.

Paranoia hasn’t been a factor in Ballard’s experience, though, at least not at this stage.

“All my friends and I don’t really talk about it,” he said. “It doesn’t evoke anxiety in us anymore. Now we’re just kind of over it.”

‘A vacation after a vacation’

Nancy, meanwhile, is back home, and unsure if she’ll travel again. She was worried that people might react negatively if they learned she’d been to China.

“I know I’m fine; I’ve been back from China for over a month, but I’m nervous about how people are going to react around me,” Nancy said by phone.

She made her flight in Wuhan after more than 12 hours at the city airport. American aid workers checked her temperature every hour during the wait and the flight home on a cargo plane. She later learned the plane was donated by a private company for the evacuation. She’d heard that about 500 people were evacuated along with her. The plane landed at Travis Air Force Base near Fairfield, Calif., after about 17 hours in the air.

“I didn’t realize how it was all affecting me until I stepped off that plane and onto the tarmac,” she said. “It was like a movie. I did just want to fall to my knees and kiss the ground.”

Nancy spent two weeks under quarantine in a base hotel, along with mothers and their children and other travelers. The experience might have been nice, if she’d been free to leave — the food was good, the hotel rooms were comfortable and the people managing the quarantine were “were exceptionally friendly and accommodating.”

“They did not make us feel contaminated in any way,” she recalled. “And I heard, again, that everyone was volunteering their time to be there.”

With the experience behind her, she was even able to joke about it.

“You know you always need a vacation after a vacation,” Nancy said, “and I finally had one.”