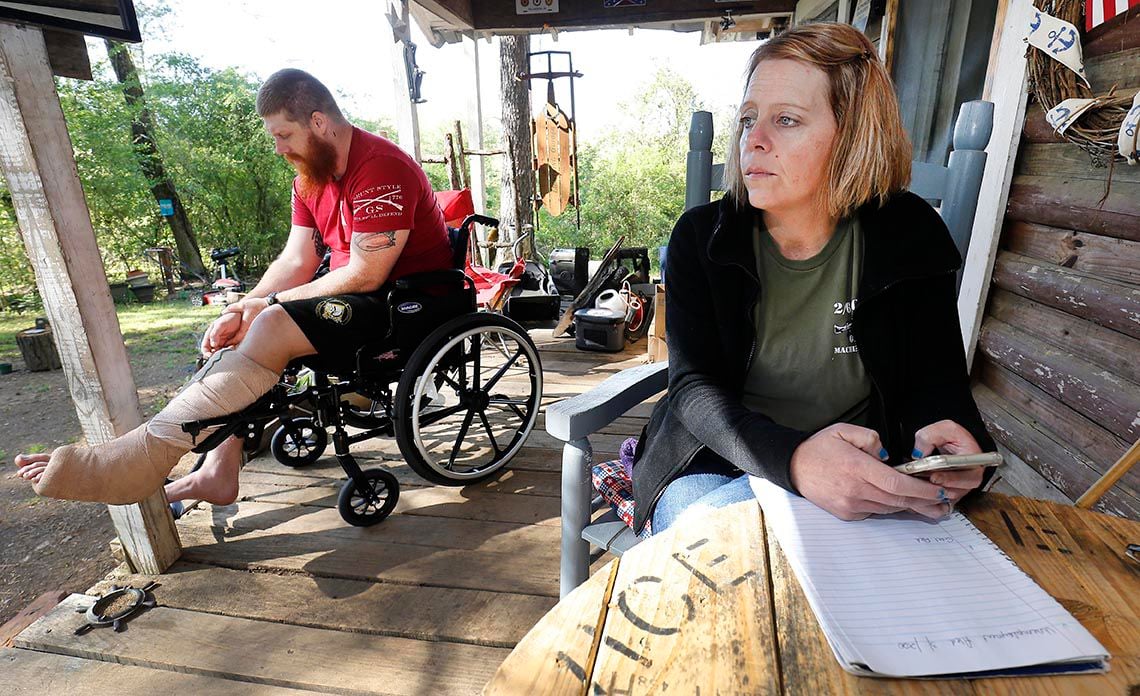 Rhonda Sutton and her husband, Will Sutton, from Ohatchee contemplate her life without a job for an extended period of time. Rhonda was laid off last month and Will is recovering at home from leg surgery.

It’s been nearly a month since JonRoss Nelson, of Oxford, had a job.

Nelson, who recently bought a six-bedroomhouse, said he’d paid March’s bills. Shortly after he was laid off from Bridgewater Interiors in Eastaboga, he said, he filed his taxes and used his tax return to cover his first mortgage payment and other expenses.

He said Wednesday in a phone interview he feels “OK” now, but is concerned about the future. He said he recently had to borrow money from his mother to buy groceries.

When Nelson filed for unemployment benefits, he said, he had to wait two or three weeks before the state Department of Labor accepted his application. He said he still hasn’t received any benefits.

“They said it’d be a week or two,” Nelson said Wednesday.

Nelson is one of thousands of Alabamians who have been laid off from their jobs due to the COVID-19 pandemic and are anxiously waiting for help from their state and federal government.

Some of those who have tried to file for unemployment via phone said they called repeatedly to no avail. Those who have filed through the department’s website said it has taken weeks for them to find out whether they will receive benefits.

Photos of Rhonda Sutton looking for a job after COVID-19 causes her layoff.

Alabama Department of Labor spokeswoman Tara Hutchison said she knows it’s taking a while for the department to get back to people.

What you should know about COVID-19

Important things to know about COVID-19 and the virus that causes the disease.

She said the department has been struggling to keep up with the demands of a record number of Alabamians who have filed for unemployment after being laid off from work due to the COVID-19 pandemic.

“Our system is being overloaded,” Hutchison said. “Staff are working around the clock to improve our system.”

Hutchison said Monday the department has seen about 85,000 applications for unemployment benefits in the past two weeks. In February, she said, they saw 6,000 and they saw 130,000 during all of 2019.

Hutchison said Alabama’s maximum weekly unemployment benefits total $275. She said those receiving unemployment could receive an additional $600 from a federal pandemic unemployment assistance program, but she’s not sure when that will be implemented.

She said the federal program also adds 14 weeks to Alabama’s 13-week limit for unemployment benefits, for a total of 27 weeks.

In the meantime, Hutchison urged those who are applying to be patient and understanding and keep trying.

Rhonda Sutton, who lost her jobs at two local nonprofits, said Wednesday she still doesn’t know whether she will receive unemployment benefits.

“You have to check in every Friday,” Sutton said while pushing a cart out of the Lenlock Wal-Mart on Wednesday. “So, I’ve checked in every Friday and still nothing.”

She said she’s “dealing with it,” but feels uncertain about the future

In the last week, Sutton said, she and her husband have resorted to eating sandwiches and Ramen noodles. Sutton is worried that she’ll be unable to buy enough groceries to last her through a government-mandated quarantine if it happens.

“If they locked us down would you have the food you need? Enough to get you through two weeks?” she said. “I don’t either.”

Sutton’s son, a student in Jacksonville, Fla., had his work hours significantly cut because of the virus. She said she wanted people to know that those who have lost hours can also file for unemployment.

Andrea DeCarlo of Anniston, who lost her serving job nearly two weeks ago, said she hasn't panicked yet. She said she expects she will, but not for a little while.

“You’ve got to put it in God’s hands,” she said as she stood outside the Lenlock Wal-Mart on Wednesday.

When DeCarlo first tried to apply for unemployment benefits, she “called and called,” but didn’t get a hold of anyone. So, she said, she put in her application online a week ago and hasn’t heard back yet.

Zeck Walker of Weaver said he’s “good,” despite losing his job as a security guard nearly a month ago. Walker, a self-described “Dr. Pepper addict,” was carrying a 24-pack of the soda out of Wal-Mart.

“You can’t get down,” Walker said. “You’ve got to try to keep your spirits up somehow.”

He said he already started to apply for unemployment, but he’s going to have to restart his application after he tracks down some of the required records, including his military discharge papers.

He said he’s worried about paying bills in the future, but was staying with friends who are helping him.

“I’m grateful for that,” Walker said.