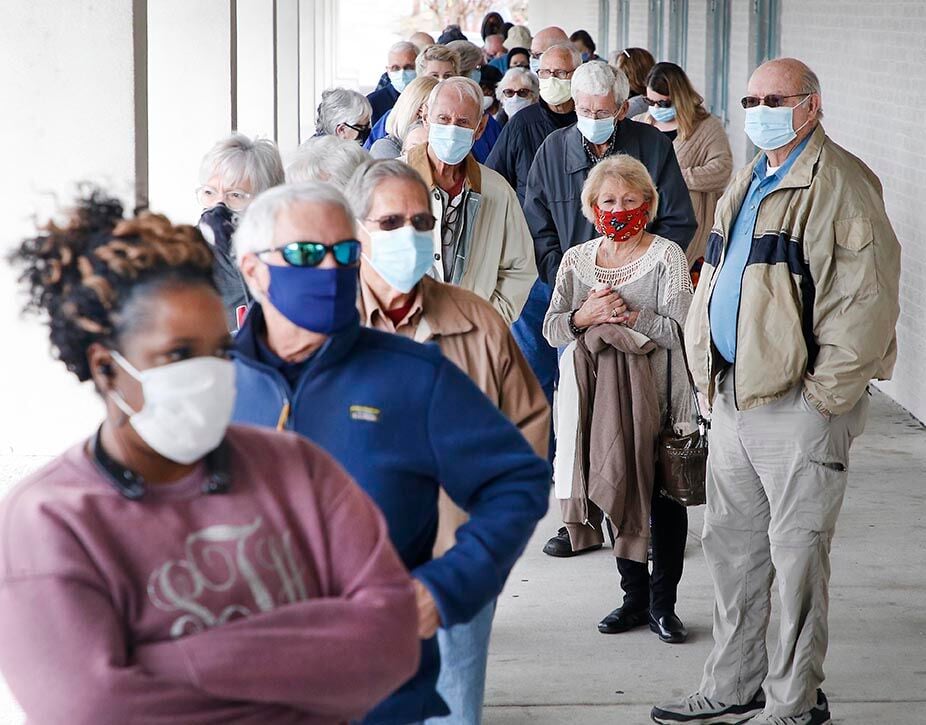 A long line of people stretches around the building as they wait to sign up and get their free COVID-19 vaccines at the Anniston City Meeting Center. Photo by Stephen Gross/The Anniston Star 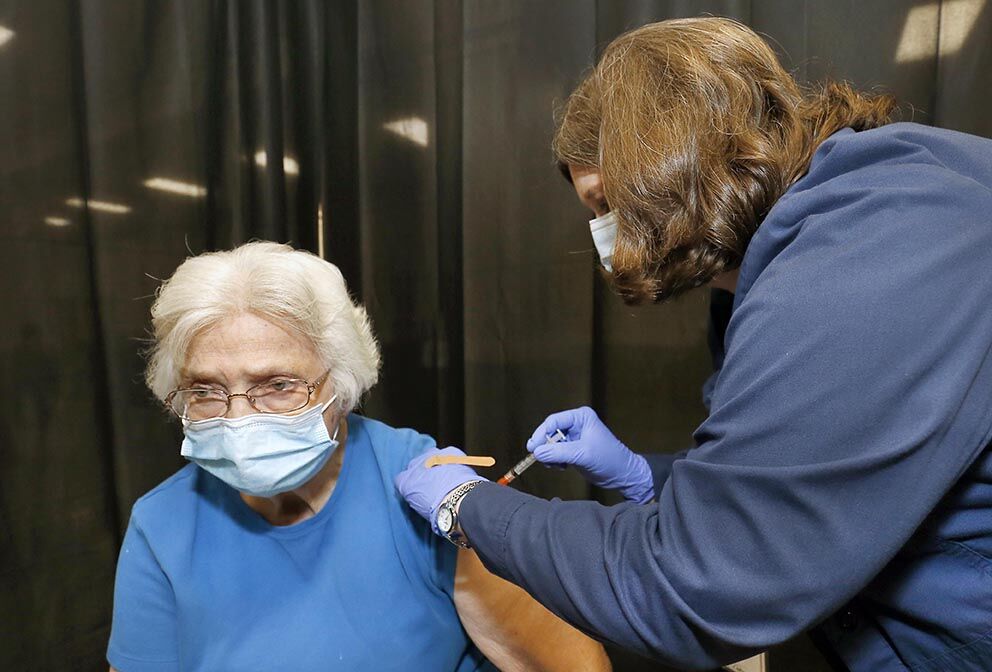 RN Stephanie Johnston of the Calhoun County Health Department administers the COVID-19 vaccine to Malene Pollard of Ranburne at the Anniston City Meeting Center in January.

WHO: For Calhoun County residents ages 75 or older

ALSO: Supplies of vaccines are limited and vaccinations are first-come, first-served. No appointment needed. Vaccines are free of charge. First responders and healthcare workers can still receive the vaccine on the days mentioned above.

When David and Connie Spellman woke up Tuesday, they didn’t expect to be vaccinated for COVID-19 any time soon. But when they heard that vaccines were available for free to people aged 75 and older at Anniston City Meeting Center, they headed right down. The couple lives in Anniston; he’s 87, she’s 86.

“It’s been on my mind for a long time,” David Spellman said of the shot. “But I didn’t know it would be this easy.”

The Spellmans were among hundreds of people who lined up Tuesday morning for shots, after local health officials unexpectedly announced they were ready to give the Moderna vaccine to anyone 75 and older who showed up.

The Calhoun County Emergency Management Agency made that announcement at 10:32 a.m. Within an hour, the parking lot of the Anniston City Meeting Center was full, and by noon the line snaked through the hallways of the meeting center, out the door and halfway around the building.

The news came as a surprise to many. On Monday, local health officials announced that yes, they’d be giving vaccinations at the meeting center, but no, they wouldn’t be available to the general public.

Early Tuesday morning, local emergency management officials said they had “met the need” of that first phase of vaccinations and would begin administering their remaining store of vaccines to anyone over the age of 75, the population considered most at risk of death from the virus.

“They felt compelled to open it up to this new phase. This is the group that’s dying in the hospital,” said Calhoun County EMA director Michael Barton.

In the fast moving vaccination push, it’s not clear that anyone knows exactly how many doses remain in the local supply, how many are coming and exactly how many have received a shot. As 75-and-over patients lined up Tuesday, some younger health care workers, still unvaccinated, waited in line with them.

Health officials said they asked local doctors’ offices and first responder agencies for numbers of people needing the shot, and they said they met those numbers before moving on to the next phase of vaccination. EMA officials said health workers still in line would be eligible for the shot.

Speaking just before noon, Barton estimated that 600 to 700 doses remained. Officials cut off the waiting line at 3 p.m. Tuesday, serving only those who were still in line when the event closed, EMA spokeswoman Tiffany DeBoer said.

DeBoer said officials expected to have enough remaining vaccine to resume vaccinations Wednesday. If supplies last, the plan is to give vaccines on Wednesday and Thursday from 7 a.m.-3 p.m.

Jacksonville Mayor Johnny Smith, 79, was working from home when he saw the e-mailed announcement from the EMA. By 11:30, he was waiting his turn to hand someone his insurance card, go into a curtained cubicle and get his shot.

In recent weeks, local leaders have spoken occasionally about possibly getting their shots in publicized events, to set an example for people who are reluctant to get vaccinated. He said the Tuesday line was a sign people are indeed interested in getting vaccinated.

“I don’t know how we’re going to stop this without a vaccine,” he said.

“Somebody called me and told me to get down here,” said Earl Scott, 84, of Anniston, who showed up less than an hour after the EMA’s announcement.

Photos of a COVID-19 vaccination event for everyone 75 and older at the Anniston City Meeting Center.

The wildfire-like spread of both information and misinformation has plagued public health officials since the start of the pandemic. Regional Medical Center infection prevention specialist Kandi Williams said Tuesday that people need to know that the vaccine does not include live virus, nor are those vaccinated at risk of transmitting the virus.

Still, she said, it’s likely many people who’ve had the shot will feel ill for a couple of days.

“You’ll have to take ibuprofen and ride it out,” she said.

Nobody in Calhoun County is fully vaccinated. Both the Pfizer and the Moderna vaccines require two shots, to be delivered weeks apart.

EMA officials on Tuesday said they expect to hold vaccination events about once per month, and they said people vaccinated on Tuesday will likely get priority when they come back for a second shot.

David Spellman, fresh off his first shot, said he didn’t recall anyone telling him he’d have priority next time around. But he isn’t likely to miss his chance at a second shot.

“Well be looking out for it,” he said.