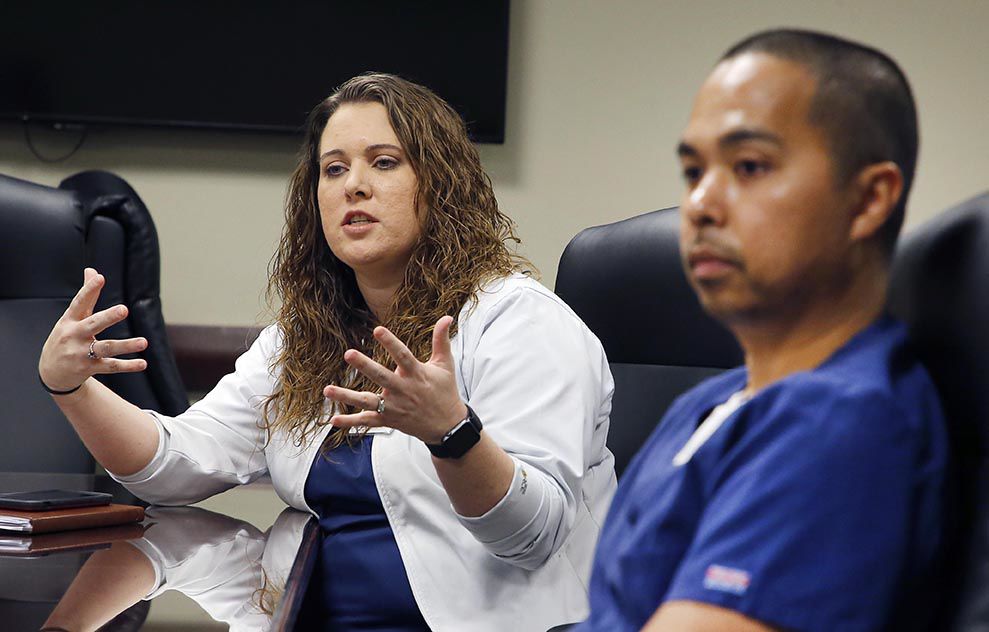 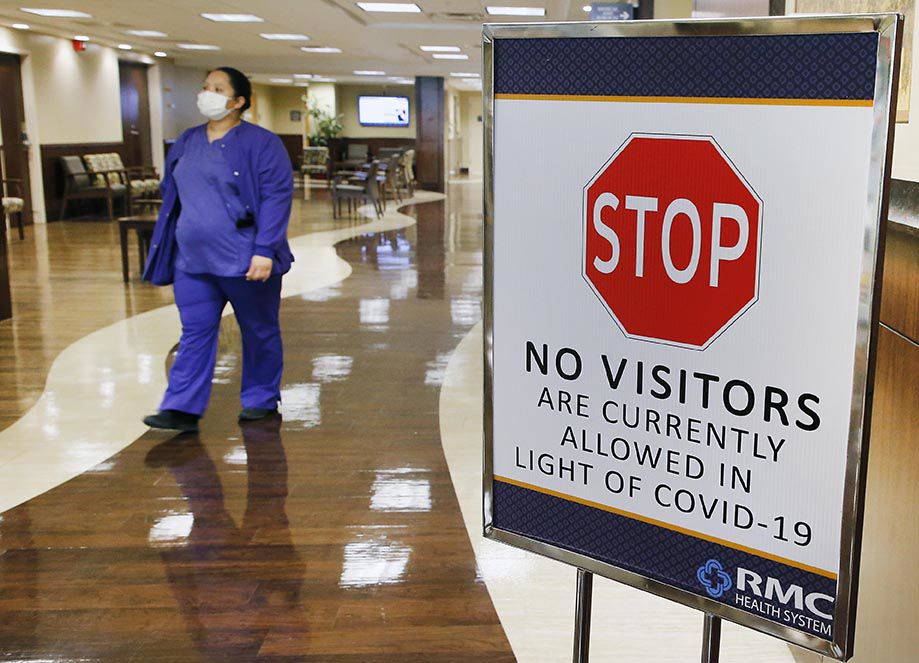 A Regional Medical Center nurse walks past a sign posted in the lobby on Friday.

In the midst of the biggest health care crisis in a generation, it's strangely quiet at Regional Medical Center in Anniston.

The parking deck, where visitors normally have to circle to find a spot, is now nearly empty. No one sits in the waiting room. If you're one of the few people allowed in, a staffer in a simple cloth mask will take your temperature before you're allowed to pass.

In the hospital, where reporters are not allowed to go, 12 patients with coronavirus-like symptoms wait in negative-pressure rooms as laboratories determine whether they have COVID-19, according to hospital officials.

As of Friday afternoon RMC had yet to house a single patient with a confirmed case of coronavirus. By the state's count at that point, 19 people in Calhoun County had confirmed cases of the disease. Health officials expect that number to surge in the next few weeks and possibly strain the capabilities of a hospital that, for now, is less busy than usual. And that’s having an effect on RMC’s finances.

“Our revenues are down nearly 50 percent,” said Louis Bass, the hospital's CEO.

When Alabama’s first COVID-19 cases emerged in mid-March, state officials took sweeping action to both slow and prepare for the spread. Along with the business shutdowns came a ban on elective medical procedures, presumably to free resources to deal with an onslaught of pandemic patients.

What you should know about COVID-19

Important things to know about COVID-19 and the virus that causes the disease.

The result is a hospital that’s going through a boom and a recession at the same time. As hospital staff worked Friday to set up a 22-patient COVID-19 wing, Bass was furloughing some non-clinical workers and cutting hours for employees at every level of the hospitals. He said Friday morning that he doesn’t have an exact figure for how many are completely off the job and how many have had their hours cut.

But with no elective procedures, few to no visitors allowed — and no COVID-19 patients as yet — the hospital has actually seen a slowdown in business. Fewer staffers are needed to admit patients. Fewer rooms need cleaning. Fewer meals are made in the cafeteria.

“This is going on at every hospital in America except perhaps the hot spots,” he said.

More than 7,000 workers in the “health care and social services” sector filed initial claims for unemployment last week, according to numbers from the Alabama Department of Labor. For comparison, the hard-hit food service sector reported about 17,000 new claims.

The Anniston City Council on Friday announced a special called meeting Saturday at 3 p.m. to discuss “layoff of medical staff” at the hospital. In a press conference Friday afternoon, Mayor Jack Draper said that under Anniston’s system of government, any council member can call a meeting. Draper said he didn’t call the meeting.

“I don’t even plan on being at that meeting,” Draper said. “I don’t think it’s a good idea.”

Draper said the hospital serves the entire county, and he said that any talk about staffing there should involve multiple cities.

“"Right now they're talking about ramping up,” said City Councilman Ben Little, who did call the meeting. “For them to talk about sending nurses home is just reckless and irresponsible.”

Little said the council should ask for an explanation of the staffing changes and possibly provide funding to keep the hospital staffed.

Hospital officials expect many of their furloughed  workers to be back soon, en masse. According to Bass, the disease models used by the Calhoun County EMA show the need for hospital beds peaking around the end of April. Those models show more than 700 COVID-19 patients needing hospitalization between now and the end of May.

The hospital now has a facility in place with negative-pressure rooms that can handle 22 patients, according to Kandi Williams, infection control preventionist for the hospital. They’re preparing a surge facility within the building to take in 20 more.

Bass said that if that’s not enough, it’s possible to set up a military-style field hospital in the parking lot of RMC.

Speaking at a press conference Friday afternoon, Calhoun County EMA director Michael Barton said he and other county officials were asking the state for personnel and equipment to set up an “alternate care” site in the event the hospital does exceed its capacity. Asked about the location of the site, Barton said the former Beckwood Manor nursing home on Leighton Avenue in Anniston was one option, as are city meeting centers and other public buildings.

Barton said the purpose of the EMA’s proposed alternate care site would be to house general patients who aren’t COVID-19 positive, to make more room in the hospital for patients who are.

Asked how many patients the hospital could expect at the local peak of the pandemic, Barton answered not in numbers but in percentages.

“You’d be looking at about 189 percent capacity to our system,” he said. “Obviously that’s over capacity.”

He said people could change those numbers by following good social distancing and hand-washing practices.