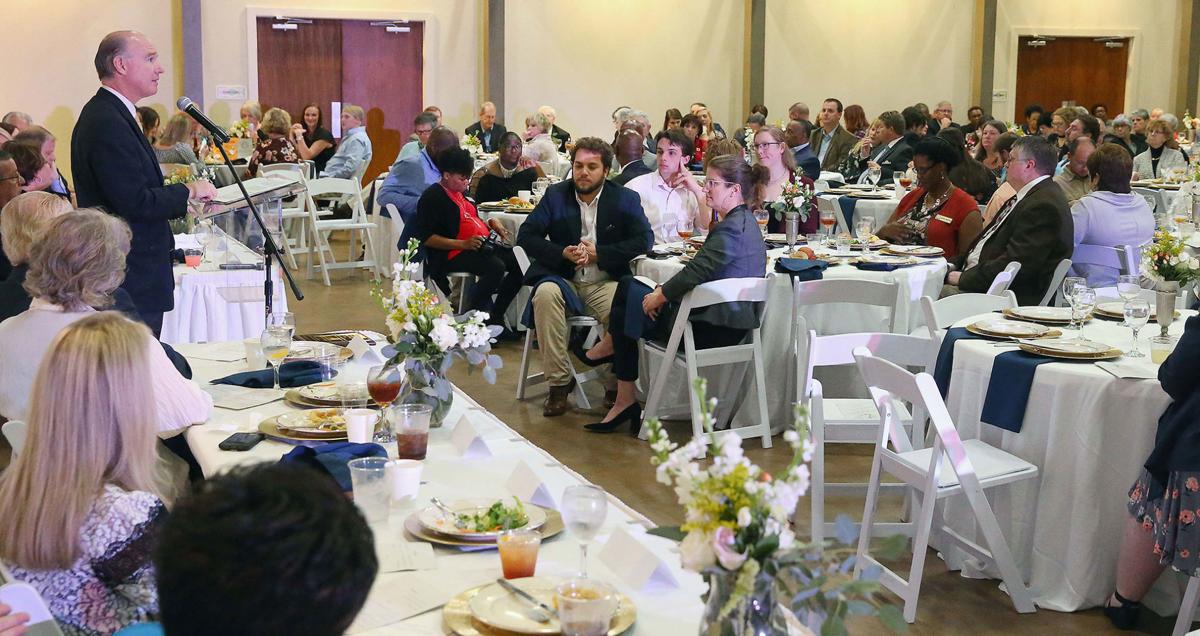 U.S. Congressman Robert Aderholt, R-Haleyville, speaks Thursday at the annual board meeting of the East Alabama Regional Planning and Development Commission at the Longleaf Botanical Gardens in Anniston.

U.S. Congressman Mike Rogers, R-Saks, conducts some business by installing officers for the coming year Thursday at the annual board meeting of the East Alabama Regional Planning and Development Commission at the Longleaf Botanical Gardens in Anniston.

“Where I live in Birmingham, we’ve got great broadband,” Jones said in a speech at Longleaf Botanical Gardens in Anniston. “You go into some of the other, underserved areas in the state and they either don’t have it, or they’ve got the equivalent of dialup.”

Jones and U.S. Rep. Robert Aderholt, R-Haleyville, delivered speeches at the annual banquet of the East Alabama Regional  Planning and Development Commission, an intergovernmental agency that provides transportation planning and other services to governments in 10 eastern Alabama counties.

Jones and Aderholt both said there was a dire need to work on infrastructure — a term that, in politics, usually refers to road and bridge maintenance. Both also said the state is struggling with a less visible infrastructure: the high-speed internet access that connects businesses to distant customers.

“There have literally been businesses that have had to close, small businesses, because their suppliers only use the internet,” he said. “They don’t use fax machines anymore.”

Aderholt said that in his district, which covers Etowah County and parts north and west, Internet access isn’t keeping up with the needs of school children, who need the Web to do their homework.

“Literally, some of the parents have to drive to McDonald’s and sit in the parking lot while the kids do their homework,” Aderholt said, referring to the wireless internet connection maintained by some fast-food chains.

Both men said they intended to work together on the issue — an unusually bipartisan tone, given that a midterm election is just days away. Jones isn’t on the ballot Tuesday; his term ends in 2020. Still, the need for better infrastructure has been one of the few things both parties have largely been able to agree on in the contentious Trump era.

Not long after President Donald Trump’s election, buoyed by promises of a federal infrastructure push, local governments scrambled to find local matching money for a coming surge of road and bridge spending. That never happened, even with one party running both houses of Congress. Trump’s efforts to launch an infrastructure plan — the infamous “infrastructure week” — were more than once drowned out by scandal and controversy in D.C.

Still, both Jones and Aderholt said they expected movement on infrastructure after the election.

Rep. Mike Rogers, R-Saks, said he, too was interested in expanding broadband access. Rogers, who represents Anniston, didn’t give a speech at the event, but did speak to a reporter afterward.

“It’s not just distant rural areas,” Rogers said. “You can be close to an urban area and still run into these problems.”

Rogers said he’d encountered Lee County farmers who wanted to do precision agriculture, a kind of crop management that uses drone and satellite imagery, but couldn’t use their equipment for lack of a broadband signal. Rogers is on the Agriculture Committee; he said a bill before that committee would increase spending on broadband expansion and remove some restrictions on broadband providers.

“I believe it is essential that we invest in and expand broadband access to the 842,000-plus people across Alabama who are without,” Hagan said in an emailed statement after the event. “It is an injustice to our children and the future of our great state everyday if we do not work diligently to solve this problem.”

Neither Jones nor Aderholt mentioned ways to pay for broadband expansion. Jones said that despite rhetoric on the campaign trail, people in both parties agree on many of their communities’ biggest needs. He cited recent political and racial violence —  attempted mail bombings, the mass murder at a Pittsburgh synagogue and a shooting at a Kentucky grocery store — as signs that people have to work hard to be more civil in their politics.

“Let’s talk to each other and not at each other,” he said.