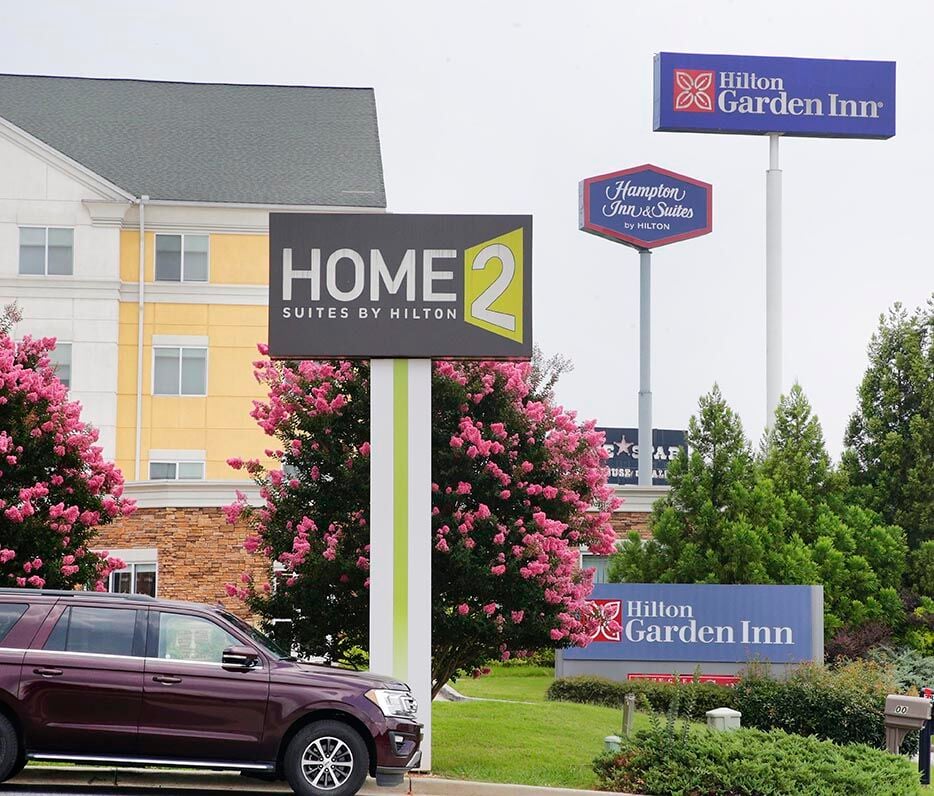 No one remembers one of Oxford’s first hotels, a wooden lodge built before the Civil War, because Union soldiers burned it into oblivion. When someone built another hotel in Oxford, then a small railstop and cotton trading center, fire consumed it, too.

What old-timers may remember is the Motel Samantha, which in 1960 was Oxford’s only lodging listed in the city directory. Advertisements described it as “ultra-modern,” with its 55 rooms featuring private telephones and bathtubs — and televisions, if guests desired.

Motel Samantha is no more, but today’s Oxford is awash in nationally branded hotels — mid-level Marriotts, Hiltons, Hamptons — that gorge on interstate traffic, business travelers, sporting events and what officials say is a regional dearth of lodging options throughout northeast Alabama’s rural counties.

Oxford’s current roster is deep: 16 hotels featuring a combined 1,199 rooms, and a lodging tax haul of $1.4 million in fiscal 2020, according to the City of Oxford Finance and Revenue Department. No other Calhoun County city comes close to matching Oxford’s lodging-tax collections.

“Oh, yeah,” said Jennifer Green, director of the Center for Economic Development and Business Research at Jacksonville State University. “Cities would die for that lodging tax.”

Two current hotel-development projects exemplify both the burgeoning hotel market in Calhoun County and the sea change in lodging among the county’s largest cities.

In Anniston, the city’s Reconstruction birth created a cottage industry of hotels and boarding houses that catered to investors hoping to cash in on Alabama’s newest industrial city. In 1960, when Oxford had one hotel, Anniston featured seven: the Bevis, Jefferson Davis, Jackson’s, Keener, Noble Inn, Ritz and Stewart’s.

Today, Anniston has six — anchored by the Hotel Finial on Quintard Avenue — and has previously worked with at least two developers interested in building a downtown hotel at the corner of 12th and Noble streets. After several fits and starts, the City Council this summer issued tax breaks to a third firm, Wisconsin-based Cobblestone Hotels, to build what Councilman Jay Jenkins has described as a “boutique hotel” that will augment the city’s lineup in advance of the opening of the new federal courthouse.

Study: New Anniston hotel could bring in $3 million a year

A Cobblestone Hotel in downtown Anniston stands to be worth as much as $3.35 million to Calhoun County each year, according to an economic impact study released Wednesday.

“The hotel has been discussed for some time,” said Toby Bennington, Anniston’s director of economic development and city planning. “It has gone awry several times, but the need has always been there.”

In Oxford, an Opelika-based hotel development firm, RAM Hotels, plans to build a Marriott-branded site, TownePlace Suites, adjacent to Oxford Commons. (The RAM Hotels website lists it as a 2021 project.) When completed, it would become the second with the Marriott brand built along Leon Smith Parkway and near Interstate 20’s Exit 188.

The difference is that the TownePlace Suites would sit closer to Choccolocco Park, Oxford’s sports complex whose calendar of tournaments, including college-level baseball and softball events, often help fill the city’s hotels.

Choccolocco Park is paramount to any discussion about the meteoric growth of Oxford’s hotel industry, said Audrey Maxwell, tourism director at the Calhoun County Chamber of Commerce. One has driven the other. “It’s a huge part of our area, and we are absolutely very fortunate to have such an amazing location here,” she said.

How many hotels are needed here?

Choccolocco Park, which opened in 2016, is but one of several attractions or events that have boosted Calhoun County’s ability to attract tourism dollars and out-of-market visitors.

That’s why this question — “How many hotels does Oxford need?” — is effectively unanswerable. On that, Maxwell is blunt: “We’re going to take all we can get.” Nevertheless, officials say the county’s hotel market is being driven as much by business and military travel as it is ecotourism and sporting events.

A new Marriott hotel is in the works near Leon Smith Parkway, although details are about as hard to come by as a hotel suite on race weekends.

Occupancy-rate data from a cross-section of Oxford and Jacksonville hotels show that their busiest days often are midweek, especially Tuesdays and Wednesdays, according to a hotel feasibility study by Core Distinction Group and STR Global, national hospitality consulting and data firms. Anniston received the study earlier this year for use in its ongoing downtown hotel efforts.

In that feasibility study, the three-year average occupancy rates for the selected area hotels rose above 70 percent on Tuesdays and Wednesdays between December 2017 and November 2020. (The hotels were chosen based on comparisons to the size of hotel Anniston may build on Noble Street, the feasibility study explained.) Sunday’s average occupancy rate was the only one below 50 percent. Nearly all of 2020’s occupancy rates were distressed by the pandemic, though the Tuesday-Wednesday dominance remained steady.

“There’s a lot of study that goes into it,” Green said. “It’s not like (the hotel developers) just guess and think it might work. The numbers have to look good for them to even consider a location.”

Often lost in armchair queries about the guests filling Oxford’s hotels is the regional aspect, which Maxwell and Green believe is vital to their successful occupancy rates. Calhoun County “is the hotel hub center, and there’s a lot of regional stuff going on,” Maxwell said.

At JSU’s Center for Economic Development and Business Research, Green often assists municipalities in nearby counties such as Clay, Randolph and Cherokee that feature few mid-level hotel options and only smatterings of rental choices through Airbnb or Vrbo. It’s common, she said, for visitors to those counties — visitors to Lake Wedowee, for instance — to book Oxford hotel rooms and drive south for their outdoor fun.

“It’s not just the demand in Calhoun County” that’s driving the hotel explosion in Oxford, Green said. “It’s a regional demand that they are filling.”

Determining what type of hotel is right

Those premises also apply to Anniston, even though its hotel market isn’t as grandiose as Oxford’s and the interstate’s proximity “is not a factor we’re looking at” with the Cobblestone project, Bennington said.

“I know a lot of people are like, ‘Well, who would want to stay in downtown Anniston? Where’s the tourism in that?’ But it’s business-driven,” Green said. Anniston’s prominence as the county’s health care and legal centers also plays a role. “There’s a huge amount of business travel that occurs in our county, and because of that business travel, people aren’t always interested in staying in Oxford.”

Plus, “Maybe their travel is in the more northern part of the county or Cherokee County, and they don’t want to have to travel all the way from Oxford.”

Oxford’s hotel garden south of Interstate 20 exemplifies what Green calls “economies of agglomeration” — the concept that businesses often benefit when in proximity to competitors. It’s why, for instance, McDonald’s and Burger King franchises are often next-door neighbors. Anniston’s hotel market doesn’t have that.

What Anniston’s proposed site will likely feature, however, is a reliance on the business travel that fuels much of Oxford’s weekday stays. Government employees are often bound by modest per-diem rates for hotel expenses, which can be a factor for cities in situations like Anniston and the developers they partner with.

“That determines what kind of hotel you get,” Green said. “So you're not going to get an Omni Hotel in the middle of Anniston because they’re not going to meet those per-diem rates, but you may get a more mid-level hotel that meets that government per-diem and can accommodate that business traveler.”

The chamber’s stance: The county will take both of them, and more.

“Certainly an extra hotel for the (new) federal courthouse and all the professional travelers that will bring in, even those from (Regional Medical Center), that would absolutely help,” Maxwell said.

“It is a growing need because we have such growth in the Calhoun County area towards all these new events and attractions and our existing events. … We are continuing to grow.”