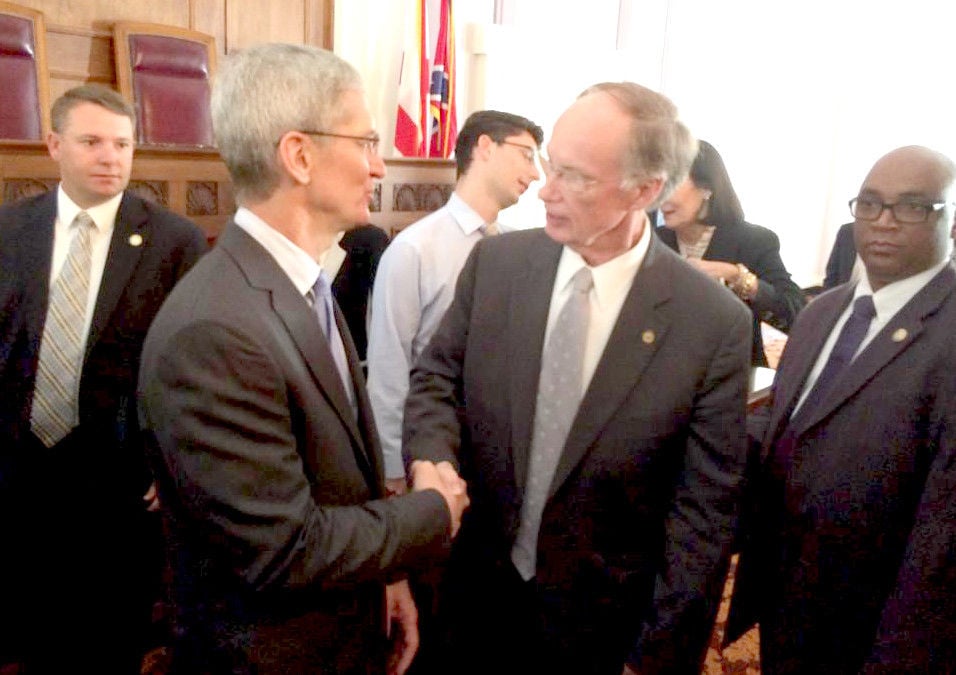 Apple chief executive Tim Cook, left, shakes hands with Alabama Gov. Robert Bentley on Oct. 27 at the state Capitol. Cook had just delivered a keynote address after being inducted along with others in the Alabama Academy of Honor. 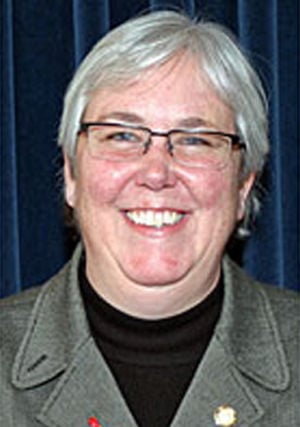 In 2011, Todd filed a bill that would ban state agencies from firing their workers —  gay or straight — based on their sexual orientation. Todd said many Alabamians believe gay workers are already protected under law — though there’s no explicit mention of sexual orientation in federal civil rights laws, and no law in Alabama protecting gay workers.

“If you ask people on the street, they’ll say of course you can’t get fired,” Todd said. “They think we’re a protected class, but we’re not.”

Todd’s 2011 bill never made it out of committee, but the Washington D.C.-based gay rights group Human Rights Campaign later took up the cause of state-level employment protections when it began a publicity push in Alabama earlier this year. And in October, Cook — an Alabama native and CEO of one of America’s best-known tech companies — criticized the state’s employment laws in a speech before the Alabama Academy of Honor, where he was being inducted as a member.

“Under the law, citizens of Alabama can still be fired for their sexual orientation,” Cook said. A few days after the speech, Cook came out as gay in an opinion piece published in Bloomberg Businessweek.

On the day of Cook’s speech, Gov. Robert Bentley told The Anniston Star he wasn’t sure it was, in fact, legal to fire someone based on sexual orientation. He said he’d look into the issue.

“As it relates to state agencies in Alabama, it would be a violation of Title VII and Sections 1981, 1983 and 1985 of the Civil Rights Act to terminate a person based solely on sexual orientation,” Bentley’s press secretary, Yasamie August, wrote in an emailed statement. August’s statement didn’t address discrimination in private workplaces, and attempts to reach her for further comment Thursday were not successful.

Efforts to use the Title VII Civil Rights Act to challenge anti-gay discrimination in the workplace have been “hit or miss” in federal courts, said James Leonard, a vice dean who teaches employment law at the University of Alabama School of Law.

Some plaintiffs have successfully argued that anti-gay discrimination is a form of gender discrimination under the civil rights law, Leonard said. More often, courts have rejected those claims, saying gay rights weren’t on the minds of lawmakers in the mid-1960s.

“Think of ‘Mad Men’ or something like that,” he said, speaking of the television show set in the 1960s. “That kind of progressivism just was not in the air.”

Todd said the possibility of a lost job is something gay workers deal with often.

“I hear from teachers all the time who are terrified that they’ll be fired because someone will find out that they’re gay,” she said.

Todd said she hasn’t spoken to Cook about her decision to name a bill after him. She said she plans to call her bill an “economic development act” because anti-gay attitudes and policies in the state are driving high-tech companies away from Alabama.

“Most big fortune 500 companies have already put anti-discrimination policies in place,” she said. “It’s a question of recruiting. Workers want to know they’re coming to a place where they’re protected.”

Attempts to reach Cook, through Apple, were not successful Thursday.