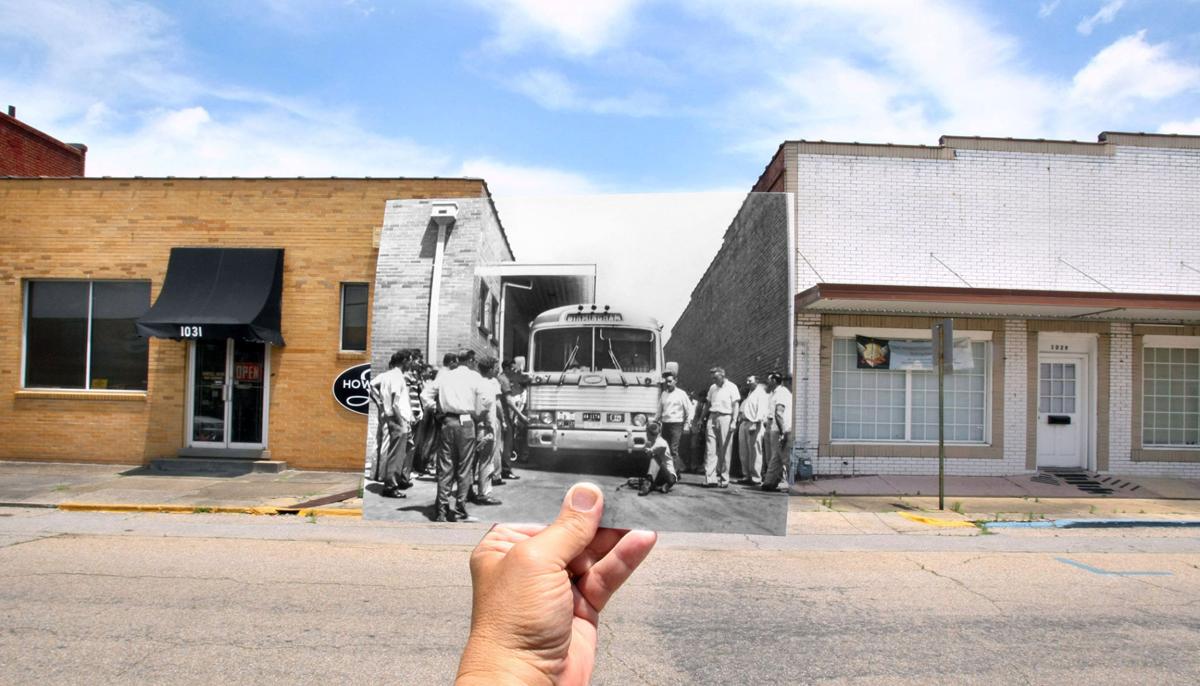 A photo of a white mob's encounter with a bus carrying Freedom Riders in 1961, superimposed on the backdrop of Gurnee Avenue in 2013. (Photo illustration by Stephen Gross/The Anniston Star) 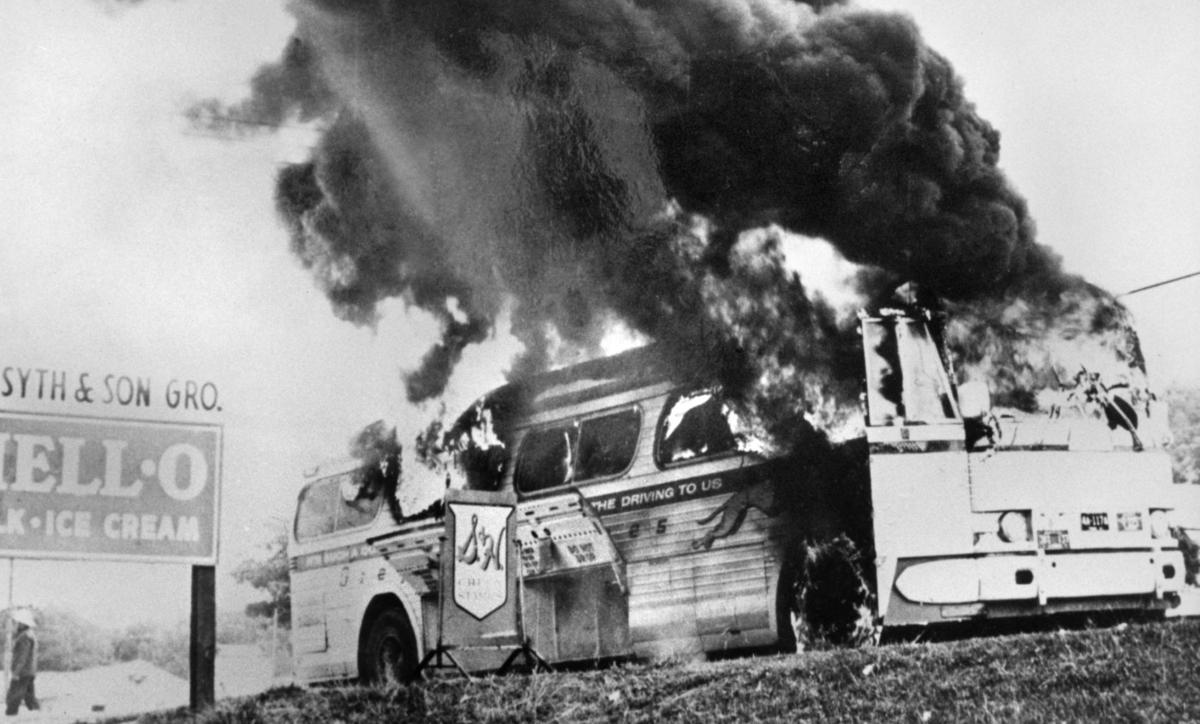 A Greyhound bus burns on Alabama 202 west of Anniston on May 14, 1961. A mob attacked the bus because it was carrying civil rights activists known as Freedom Riders. (Archival photo/Joseph Postiglione/Special to The Star) 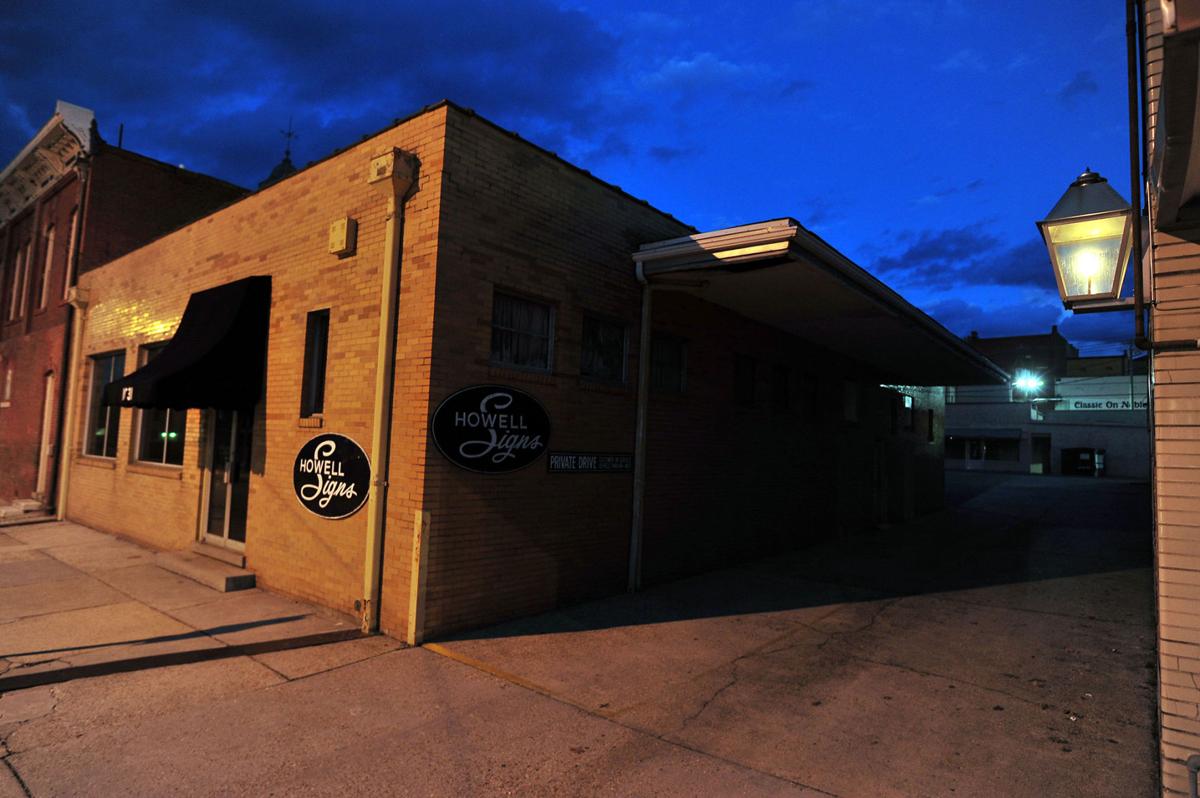 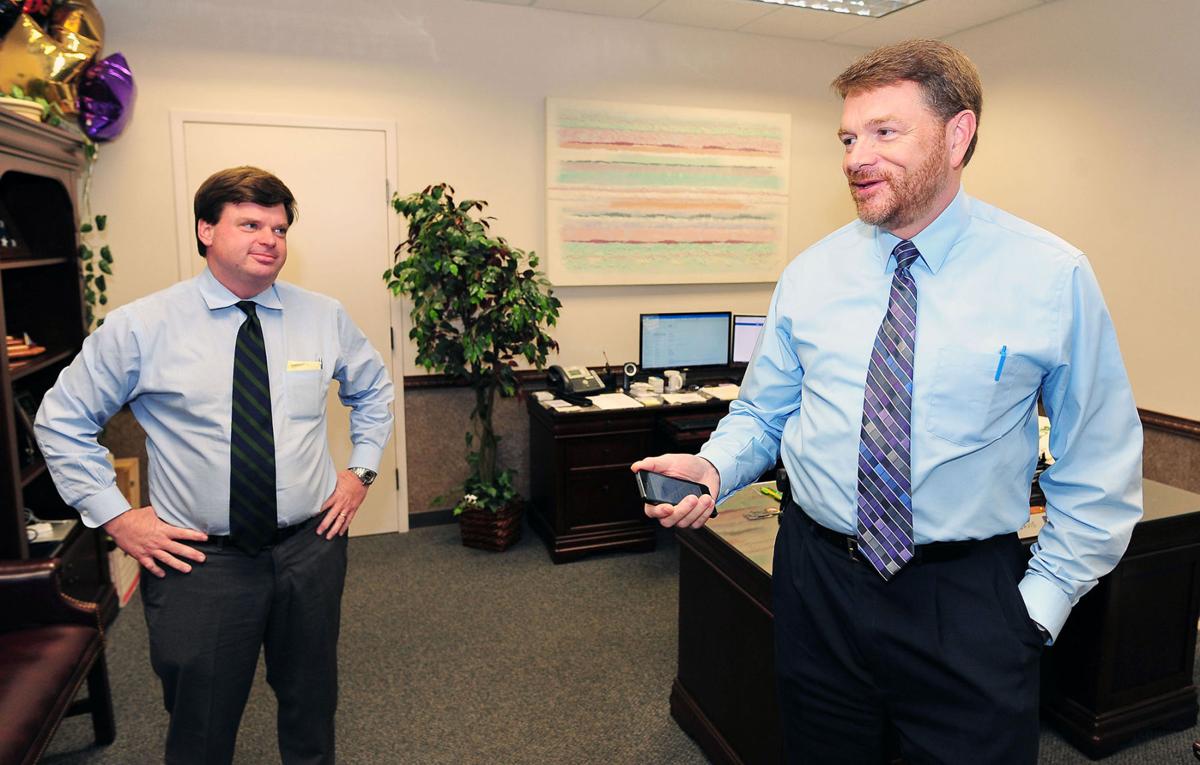 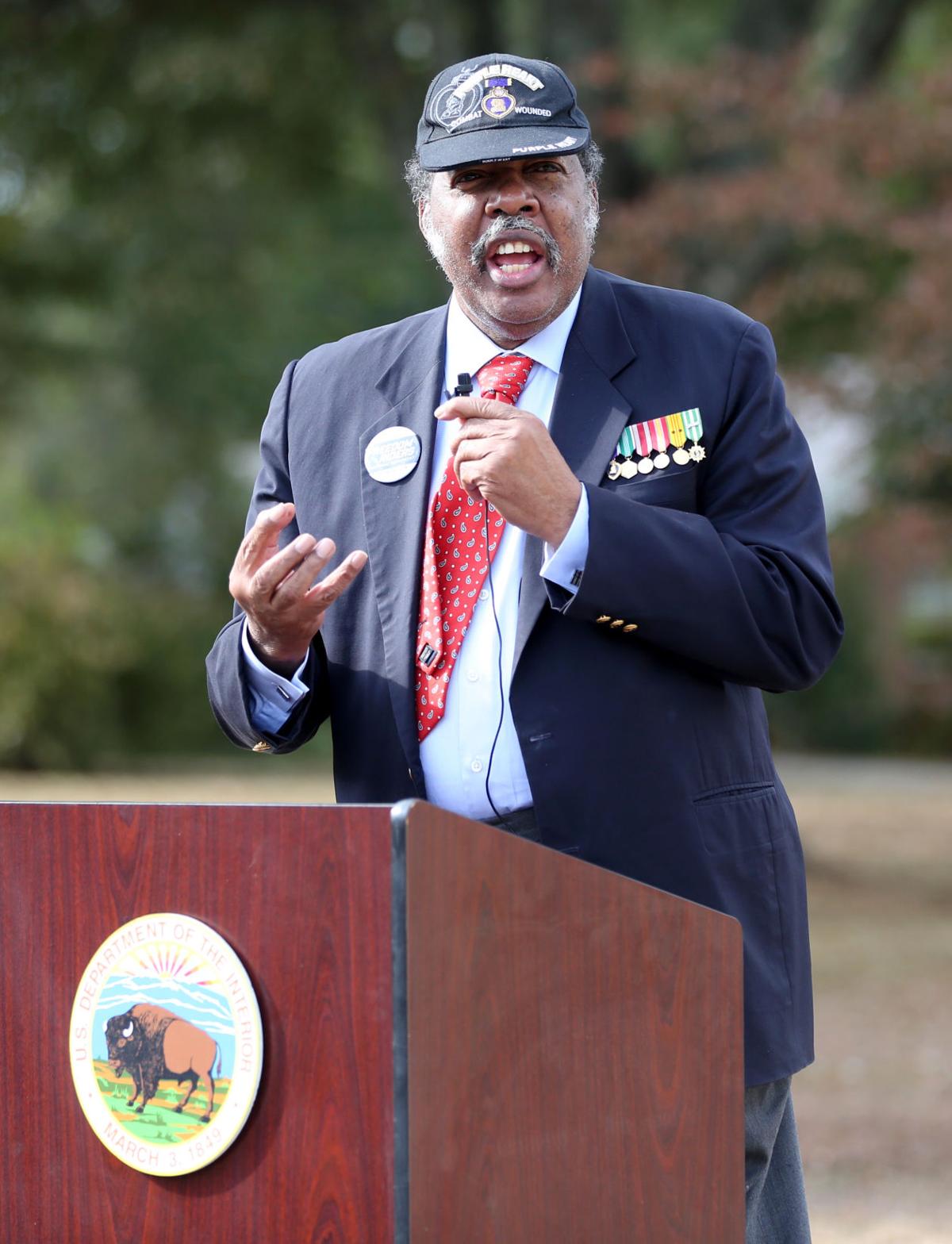 At an event in October, Freedom Rider Hank Thomas tells the story of the day a Greyhound bus was attacked and burned feet from where he stood in 1961. Federal officials were visiting Anniston in at the event to consider establishing the Freedom Riders National Monument. (Kirsten Fiscus/The Anniston Star)

Hank Thomas wasn't welcomed at the bus station on Gurnee Avenue in Anniston in May 1961, when he and other civil rights activists rolled into town challenging segregation on interstate buses.

But Thomas will be welcomed when that former bus station is restored by the National Park Service, preserved as a national monument honoring Thomas and the rest of the Freedom Riders.

President Barack Obama on Thursday proclaimed as a national monument the former bus station in Anniston and the site on Alabama 202 west of town where Thomas’ bus broke down and was firebombed by a white mob.

Obama did so eight days before the end of his term, using his power under the Antiquities Act of 1906 to ensure the Anniston sites will be recognized as an integral part of the civil rights movement for generations to come.

The designation was one of several civil rights sites Obama preserved by proclamation Wednesday — a list that also included 16th Street Baptist Church in Birmingham.

“They tell the important stories of the citizens who helped launch the civil rights movement in Birmingham and the Freedom Riders whose bravery raised national awareness of segregation and violence,” Obama said of the sites, according to a White House press release. “These stories are part of our shared history.”

On Mother’s Day in 1961 a bus carrying carrying black and white activists rolled into the bus station, where the mob awaited them. The Freedom Riders were testing a U.S. Supreme Court decision forbidding racial segregation in interstate travel facilities. Prior to the decision, it had been common to bar blacks from the waiting rooms, lunch counters and restrooms used by whites at stations in the South.

The mob of locals slashed the bus’ tires and followed to where it broke down on Alabama 202, 6 miles west of the city. A firebomb was tossed into a window, but the riders managed to escape before flames destroyed the bus.

An Anniston Star photo of the burning bus that circulated worldwide galvanized public sentiment about the Freedom Rides and became one of the iconic images of the movement for civil rights for African Americans.

The president’s proclamation Thursday will apply to both the former Greyhound station on Gurnee Avenue and the site along Alabama 202.

Thomas expressed thanks by phone Thursday that the president acted before leaving office.

“I feel great,” Thomas said. “I feel a kinship with some important people and events from Alabama who brought this nation out of darkness,” from the Tuskegee Airmen to Rosa Parks and the people who fought oppression in Birmingham and Selma.

Asked if he’s thought about what it will feel like to see the former bus station restored to its appearance when he was there those many years ago, Thomas said he has.

“I look forward to taking my grandchildren and great-grandchildren there and kind of pump my chest a bit and say ‘your grandfather was a foot soldier in this movement,’” Thomas said.

“To God be the glory for the things he has done,” state Rep. Barbara Boyd, D-Anniston, said, quoting a gospel song by Andrae Crouch. Boyd worked for 10 years on a committee dedicated to developing the Alabama 202 site into a park.

“We need to get ready to open the floodgates to heritage tourism, to students and to visitors from around the world,” said Pete Conroy, another organizer of the park effort.

Organizers didn’t have hard estimates Thursday of the number of tourists the sites would bring in, but they’re confident there’s demand. Teachers and history buffs came to the sites even before they were marked, Boyd said.

“There are people who just come out there and look,” she said.

Boyd noted that Anniston is between Birmingham and Atlanta, two common stops for tourists interested in civil rights history.

By Thursday evening, the National Park Service had set up a webpage for the Freedom Riders National Monument, including directions to the site.

On Thursday the National Park Service also announced that Anniston had been awarded a $496,375 grant to restore the city’s former bus station. Birmingham was also awarded a $500,000 grant for 16th Street Baptist Church.

Vaughn Stewart, the former Anniston mayor who spent nearly two years with his administration working on the project, said by phone Thursday that he received a call from White House staff at around 4:30 p.m. Thursday informing him of the news.

“It’s a great day for Anniston, and for the legacy of the Freedom Riders. Their legacy lives on,” Stewart said. “This will be the only national monument exclusively honoring the Freedom Riders in the country, and that’s big.”

Draper said the president’s announcement came after much work by city staff and the previous administration.

“This would not have happened but for the efforts of city staff,” Draper said.

Kent Davis, city manager, said “it’s a huge day for Anniston” and that it feels like the city is “on a roll” after several announcements of other multi-million dollar development projects in the city.

In time, the federal government will renovate the former Greyhound bus station on Gurnee Avenue to return it to its 1961 appearance. National Park Service staff will work there, guiding visitors through the place where, years before, men and women risked their lives testing desegregation laws on interstate buses and bus terminals.

Archival photos from the May 14, 1961, Freedom Ride attacks in Anniston

Archival photos from the May 14, 1961, attacks in Anniston on a bus carrying Freedom Riders.

The power of a photograph

A letter to President Obama about Anniston’s Freedom Riders sites

A national model for healing arrives

Try as it might, Anniston has never escaped the burning bus. We’ve moved on, pushed it aside, acted as if it were nothing more than a minor bl…