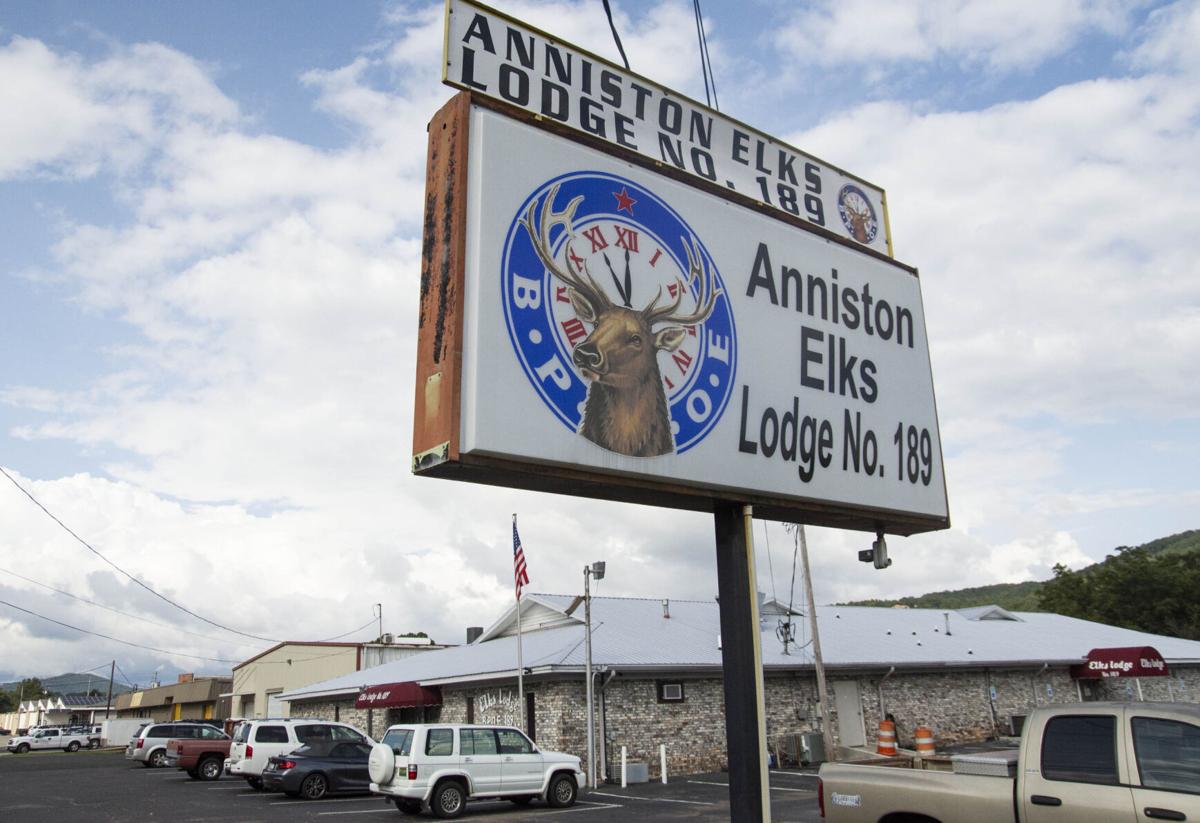 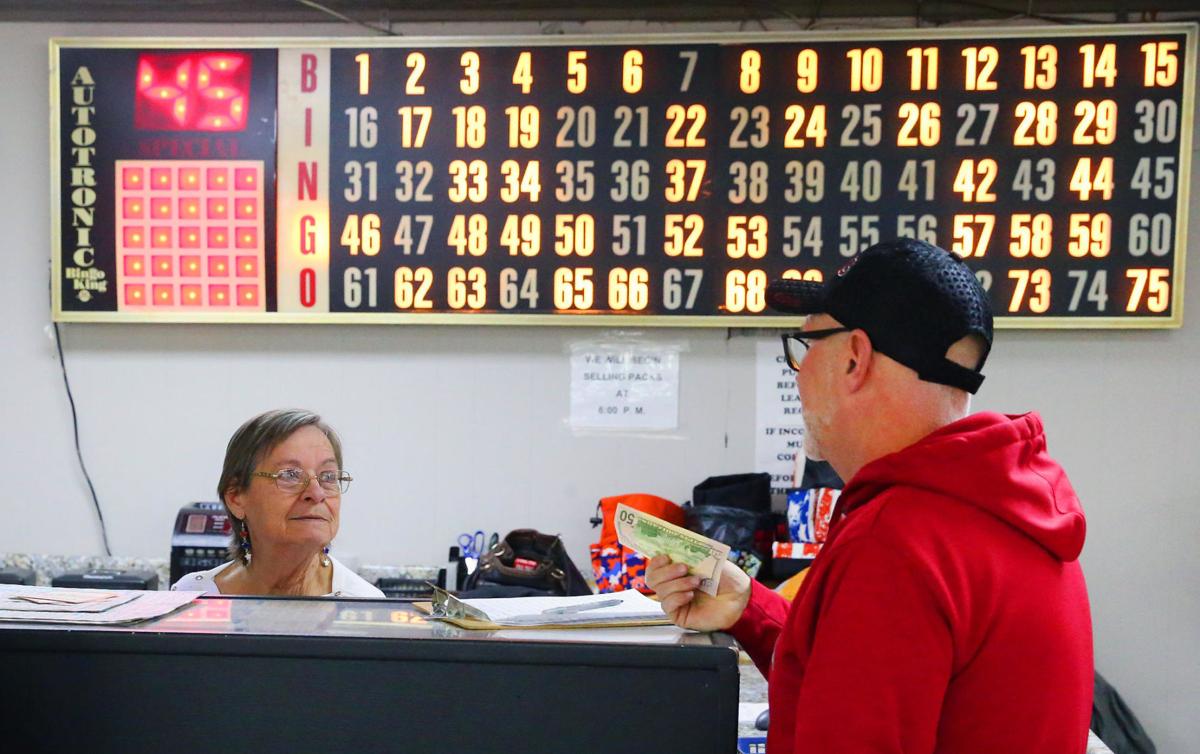 In this image from 2018, Barbara Gann sells bingo cards to a player during bingo night at the Elks Lodge No. 189 in Anniston. An Alabama constitutional amendment to restore by-the-book legality to the Elks' game is on the ballot in November.

The proceeds pay for dictionaries for third-graders, college scholarships and an Independence Day dinner for veterans, Elks Lodge members say.

The bingo games are also — though no one wanted them to be — most likely illegal.

“I don't know why we’re still going,” Gann said Thursday. “I guess because the city’s not shutting us down.”

Gann and other supporters are closely watching an amendment on the Nov. 3 election ballot, one that will allow Calhoun County voters to finally end the fiasco that landed their long-running bingo game in legal trouble in 2018.

The bingo amendment is one of seven that Calhoun County voters will see on their ballots when they go to the polls for the presidential election in November. Long lists of amendments are common in Alabama, governing issues that are sometimes repetitive or arcane, and voters often pay them little attention.

That’s likely how the troubles of the Elks Lodge began.

Lawmakers in 2017 proposed an amendment that would keep any bingo hall from operating within 1,000 yards of a residence. The measure was meant to address concerns about Big Hit Bingo, a bingo hall that opened in 2016 in rural Calhoun County near Southside.

Everything that could go wrong with that amendment, did. Big Hit was already closed by the time the measure went to voters in 2018. Neighbors of the former bingo hall, in the weeks before the vote, said no one had told them the measure was on the 2018 ballot, and some criticized the wording of the ballot measure as confusing.

The amendment passed anyway. Only in the days after the vote did local residents realize that the Elks Lodge on Noble Street in Anniston — home to a charity bingo game that operated without opposition for years — was just 600 feet from houses on Front Street.

The Calhoun County Bingo Regulatory Commission voted to recommend revocation of the Anniston lodge’s license, even though members of the board called the move “tragic.” The Elks sued, seeking an injunction to stop the amendment from being enforced.

The Anniston City Council, which also has a say in the lodge’s license, never acted on the matter, leaving the lodge free to operate, for now.

Gann said the last few months have been tough for Lodge bingo. The COVID-19 shutdown in April halted the games completely for weeks. Gann said the crowds are slowly returning to their pre-pandemic size.

But the legality issue was supposed to have been fixed by now. Lawmakers voted in 2019 in favor of a new amendment, one that would exempt Calhoun County bingo operations from the 1,000-yard rule if they’re within city limits of any city.

That amendment was supposed to be on the March 3 primary ballot this year. But when voters went to the polls, the amendment wasn’t there. State officials in March acknowledged that it was left off by mistake.

“If everybody did it right we wouldn’t be here now,” said Rep. Randy Wood, R-Saks, sponsor of the amendment. He brought a second bill back to the Legislature this year to make sure the amendment landed on the Nov. 3 ballot.

Gann said the lodge has yet to begin campaigning for the amendment, even though the vote is less than two months away. She said lodge members want to see the ballot wording before they begin a campaign.

“We’re waiting to see exactly how the amendment is going to look,” she said.

The bingo amendment is the only Calhoun County measure that will come in front of voters in November, but there are several statewide issues voters will also have to decide.

Statewide Amendment 1 would change the Alabama Constitution to state that “only” a citizen of the United States can vote in the state’s elections.

The amendment, introduced in the Legislature by state Sen. Del Marsh, R-Anniston, is part of a push by activists to enshrine citizen-only voting in state constitutions.

There is no evidence anyone’s voting rights will change whether voters say “yes” or “no.” The Alabama Constitution already limits voting to citizens, although the document now says that “every” qualified citizen can cast a ballot, rather than “only” citizens.

“I have no idea how anyone who’s a non-citizen would be voting in this state,” said Alabama Secretary of State John Merrill. “If they did, we would discover them, identify them and indict them.”

Attempts to reach Marsh for comment Thursday were unsuccessful. Last month, Marsh told Alabama Daily News that he didn’t see non-citizen voting as a big problem in Alabama. Rather, he said the amendment “sends a message to Washington.”

Statewide Amendment 2 would make changes to the administration of the state’s judicial system, most notably to the Judicial Inquiry Commission, a body that investigates complaints against judges and sometimes disciplines them.

The JIC is perhaps best known for its struggles with former Alabama Supreme Court Chief Justice Roy Moore, who was twice removed from office for defying court rulings — first by disobeying a federal court order to remove a Ten Commandments display at the Supreme Court building, and later by disregarding the U.S. Supreme Court’s 2015 decision legalizing same-sex marriage.

State Sen. Cam Ward, R-Alabaster, was one of the sponsors of the amendment. He said the most recent Moore case sparked criticism by some in the Legislature who believed the power to impeach judges was in the hands of lawmakers, not fellow judges. He said there were also longstanding complaints by some lawmakers about the JIC’s handling of judges in lower courts.

Some of those lawmakers, he said, wanted to abolish the JIC altogether.

“This was a compromise,” he said.

In both of Moore’s cases, the judge was suspended from office before his case was heard by the Court of the Judiciary. In a lawsuit in 2016, Moore argued that his suspension was unconstitutional.

This amendment would lengthen the amount of time a judge, when appointed to fill a vacancy, would serve before coming up for re-election.

Merrill, the secretary of state, said the current system basically resets judges’ terms every time a judge retires and new judges are appointed. An appointed judge has to run for re-election at the next general election if that judge will have a year in office in the January following that election. General elections happen every two years.

The amendment on the November ballot would extend that time in office, requiring judges to come up for re-election at the next general election if they will have two years in office in the January after the election.

Amendment 4 would allow the Legislature to recompile that document, cutting out wording that is no longer applicable because it’s been eliminated by amendments or because it’s been struck down by courts. That would likely include racist language, such as provisions that require separate school systems for black and white children — language that was long ago rejected by federal courts.

“It’ll be large still,” said Nancy Ekberg, a member of Alabama Citizens for Constitutional Reform, a group that advocates for constitutional change. “But it will be a document we can give to economic developers and say we got rid of Jim Crow.”

Multiple efforts over the years to convince lawmakers to rewrite the constitution from scratch have failed. Ekberg said that is not what’s proposed in the November amendment. She said Legislative staff will be charged with compiling the document without making substantive changes. The final product would go to the voters for approval only if the Legislature first votes in favor of it.

Seemingly innocuous changes to the Constitution — including efforts to remove racist language — have failed before, largely because of debates about the wording of the changes.

Othni Lathram, the director of the Legislative Services Agency, said his agency can complete a recompilation in time for a 2022 vote if the amendment passes. He said that if a recompiled constitution doesn’t pass in 2022, the constitution will remain as written.

“If the public doesn’t pass it, then obviously nothing changes,” he said.

Voters across the state will vote on measures that would ensure that people in Lauderdale and Franklin County who shoot someone on the grounds of a church in defense of their own life or someone else’s will not be held liable for the shooting.

Similar measures have come before the Legislature in recent years as more churches have adopted armed security in the wake of mass shootings across the country. Critics of the amendment have said Alabama’s “stand your ground” laws would likely already cover such a situation.