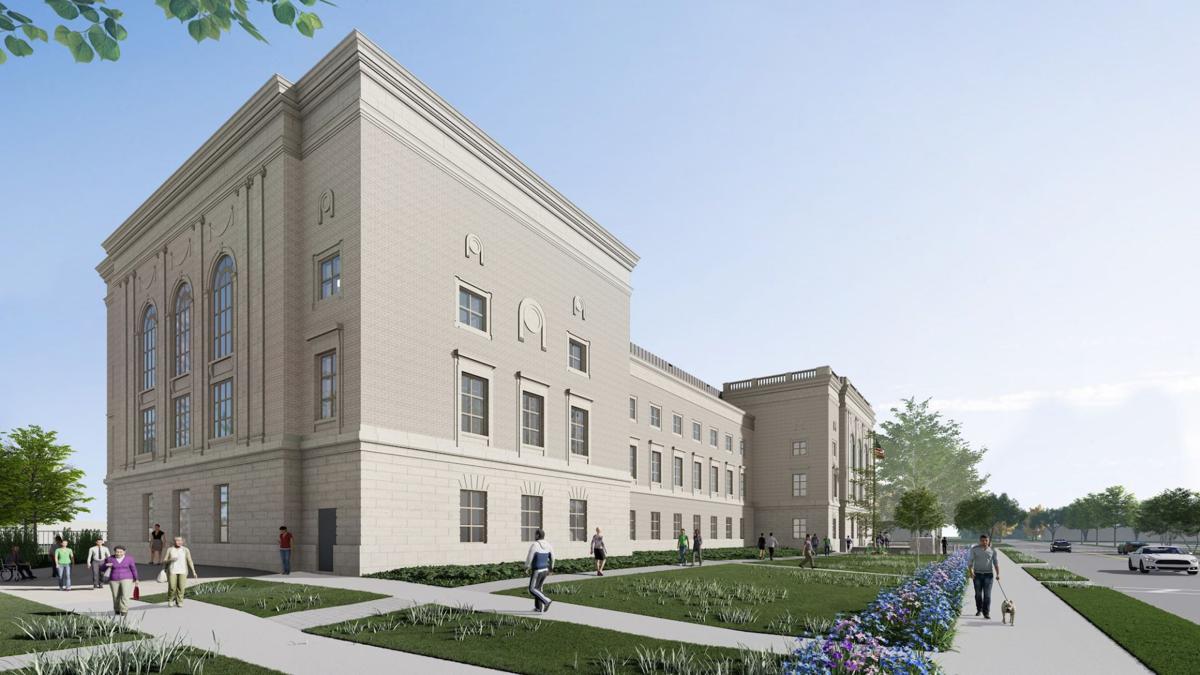 The U.S. General Services Administration says our new federal courthouse on Gurnee Avenue is going to look something like this. Its ongoing construction is a tangible sign of progress and promise in an otherwise grim year. 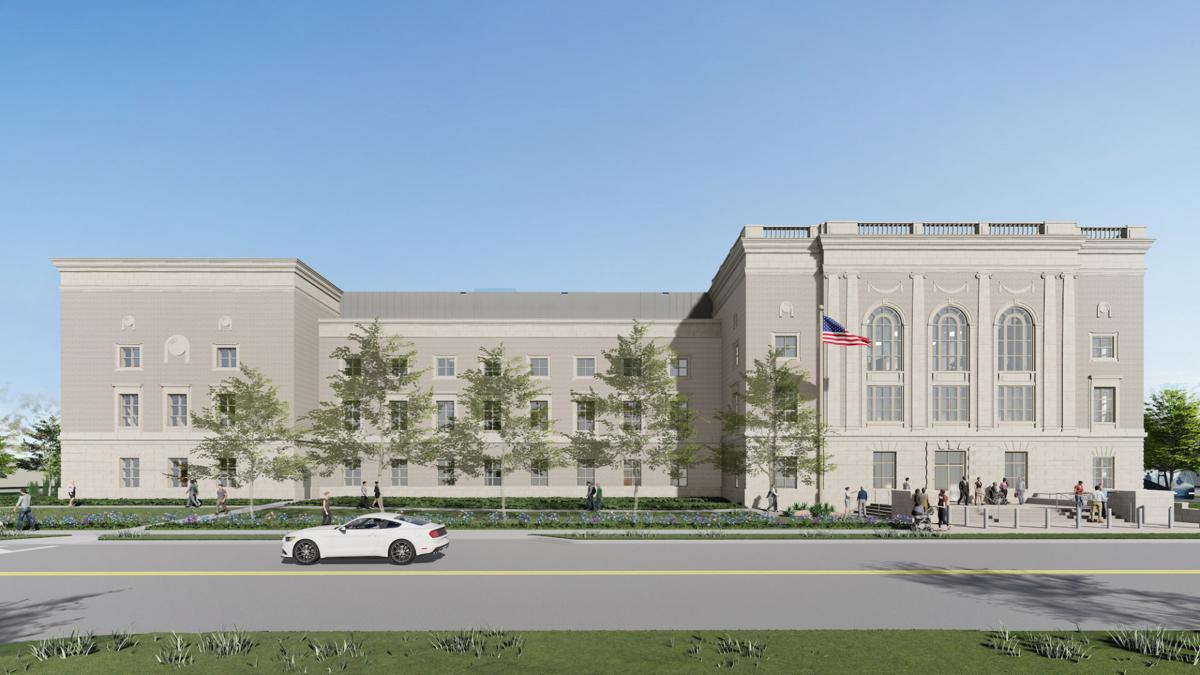 The U.S. General Services Administration released design renderings Friday morning for a new federal courthouse to be built in Anniston on Gurnee Avenue, the site of the former City Hall building. Construction on the 63,000 square-foot building is due to start this year. 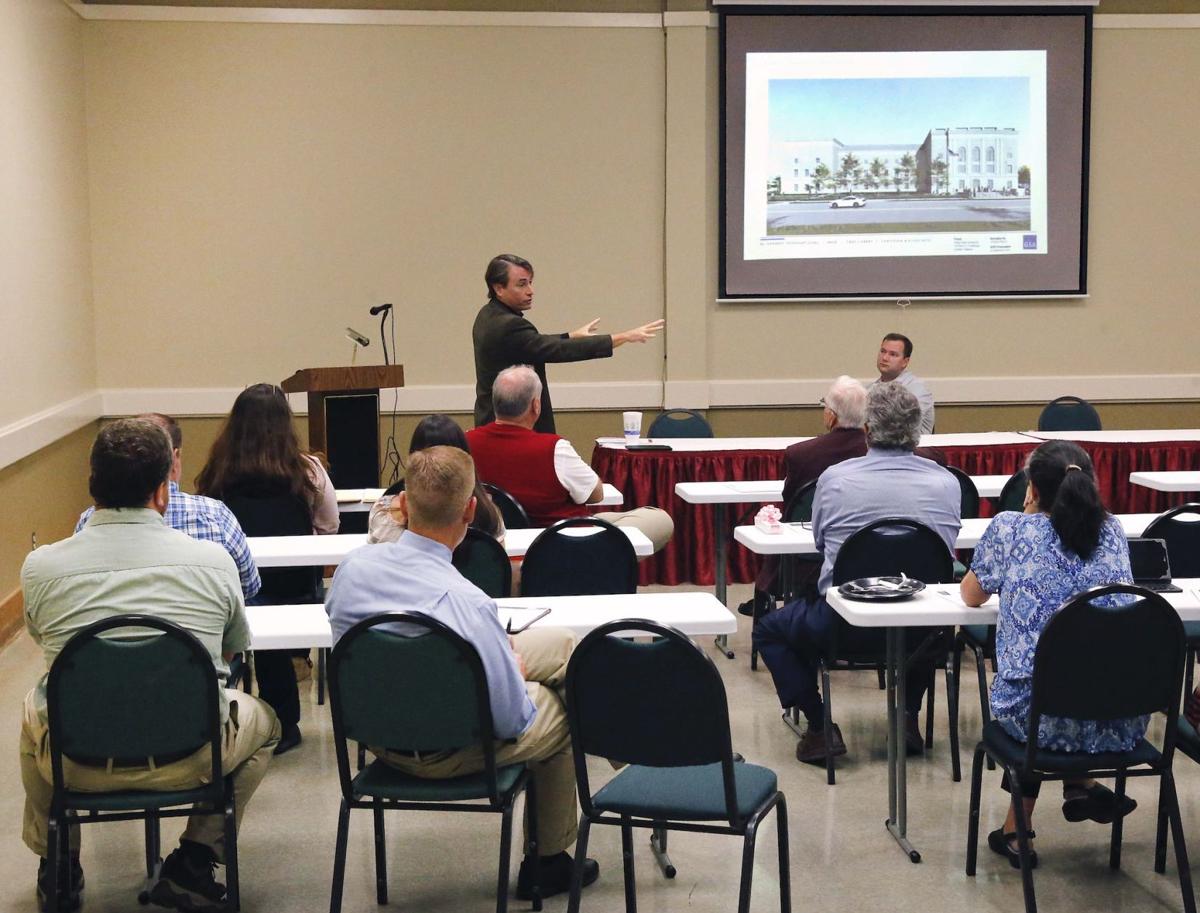 David Christian shows the crowd at the Anniston Historic Preservation Commission meeting at the Anniston City Meeting Center the ins and outs of the new federal courthouse to be built in downtown Anniston. Photo by Stephen Gross / The Anniston Star

The new federal courthouse set to be built on the site of Anniston’s former City Hall will closely resemble the existing courthouse on Noble Street, and that is no accident.

“The existing federal courthouse was the single most important design influence on this process,” said David Christian, an Anniston architect who consulted on the project along with Texas-based company Page Southerland Page. Christian said the design of the existing courthouse represents the presence of the federal government in Anniston, and the design of the new courthouse is intended to communicate the same idea.

Christian’s comments were part of a presentation about the future courthouse Thursday morning at the Anniston City Meeting Center. City officials and members of Anniston’s Historic Preservation Commission were on hand to hear about the design of the new 63,000 square-foot, $42.6 million facility. Renderings of the future building, which were released earlier this month, were shown in a presentation to explain the new building’s form and function.

Anniston’s City Council agreed in June to a land swap deal that gave the federal General Services Administration the City Hall site and Anniston the existing courthouse as well as $520,000. Since August, Anniston’s city government has been operating out of a temporary home in the McClellan Boulevard home of Consolidated Publishing, which publishes The Anniston Star and other newspapers.

James Griffin from B.L. Harbert, the Birmingham-based construction company that will build the courthouse, said that demolition of the site, including the former City Hall site and county health building, is set to begin in December, with fencing and internal work likely to start within two months.

“Throughout the design process, demolition and construction, we want to be good neighbors and good partners with the city of Anniston and GSA,” Griffin said. “We’re looking forward to utilizing as many local subcontractors and vendors as possible.”

Griffin said the building would be finished in late 2021 or early 2022. Afterwards, the building is expected to produce about 35 jobs, according to city planner Toby Bennington.

For the design of the building, Christian said, architects looked at how best to fit in with Anniston’s existing downtown infrastructure in addition to the existing courthouse.

“A lot of the commercial buildings in the downtown district are predominantly brick in material, traditional in character and style and classical in a lot of detailing,” Christian said. “That’s the context we find ourselves in.”

The new courthouse will heavily feature brick, with a limestone base and details around windows and roofing.

John Valieant, chairman of the Historic Preservation Commission, said the building as presented Thursday will fit well in Anniston.

“I think they caught it just beautiful,” Valieant said in a phone interview after the meeting. “It’s a beautiful building from what I saw today. It’s going to be a great thing for Anniston, and it’s going to make that area look really nice.”

Valieant said he was proud to see that the design drew heavily on the Noble Street courthouse.

“I didn’t realize just how close it was until seeing it side by side like that,” he said.

Once finished, the main entrance and most monumental facade will face Gurnee Avenue.

“Gurnee is the historical center of city government and government in general in Anniston, so putting it back from Gurnee or facing it in a different direction didn’t make any sense,” said Christian.

“We’re an Alabama contractor, and we’re very proud of this building and what it’s going to bring the