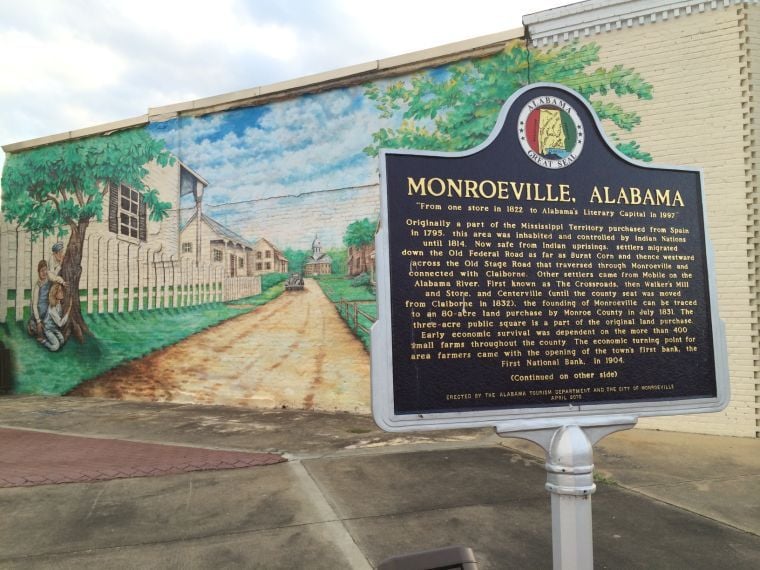 A mural in downtown Monroeville. 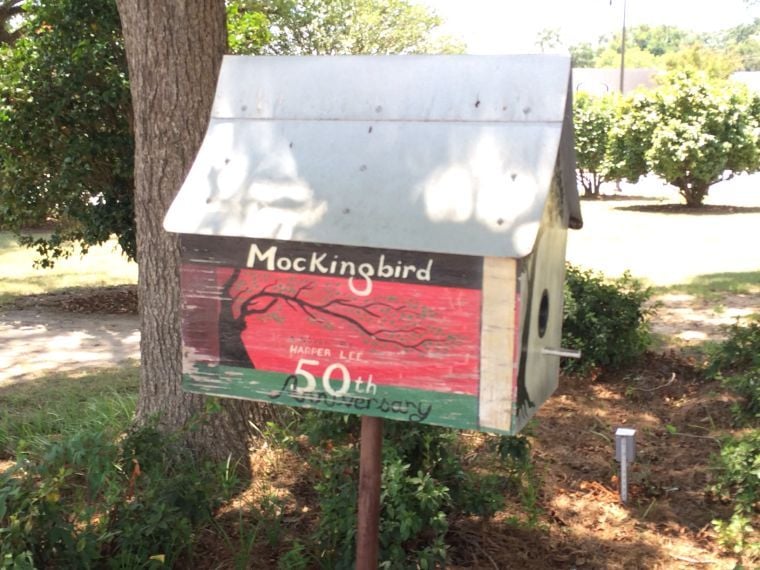 In Monroeville, nods to native author Harper Lee's "To Kill a Mockingbird" are everywhere, including on this mailbox.

A mural in downtown Monroeville.

In Monroeville, nods to native author Harper Lee's "To Kill a Mockingbird" are everywhere, including on this mailbox.

MONROEVILLE — Towns aren’t people, but they hurt and feel. They also harbor grudges and rivalries. Think Anniston and Oxford, eternal neighbors bound by geography. They’re connected by Alabama 21 and decades of civic competition, sometimes friendly, other times not.

If Monroeville is Anniston, it has two Oxfords.

One is Uriah, a place of about 300 people resting on a curvy intersection between Alabama state roads 21 and 59. It’s 19 miles to the south.

The other is Frisco City, a town of about 1,300 people carved out of history by railroads. It’s 9 miles to the south.

Between these three Alabama towns are acres upon acres of crops and timber, and not much else.

If you want to know about these places and their relationship, George Thomas Jones is your man. He’s nearly 92 and has lived in Monroeville since 1926 – before the Great Depression, before World War II, before virtually anything. Jones served in Gen. George Patton’s Third Army, where “Gen. Patton put me through about 93 consecutive days of infantry combat,” he says. On Saturdays, he works at the Monroe County Heritage Museum at the old courthouse on the city’s square. Why? Because he’s still sharp as a tack and knows more than anyone in these parts, museum staff claim.

Say this for this former Patton soldier: Opinion-wise, he isn’t shy.

“Frisco City through the years has been jealous of Monroeville,” Jones said, “because the county seat grew when they didn’t. Monroeville got things that they didn’t get, like the big supermarkets when they came in.

“But there’s a lot of good people in Frisco City, don’t misunderstand me.”

Up and down Alabama 21, one of the longest state roads in Alabama, city-town relationships such as this are more normal than unusual. Outside of the Interstate 65 cities of Huntsville, Birmingham, Montgomery and Mobile, the state is a collection of mid-sized places, small towns and one-stop light communities that many Alabamians have never heard of or visited.

Welcome to Frisco City and Uriah.

(For what it’s worth, Blacksher was a landowner, farmer, sawmill owner, timber man, company owner, virtual overseer of the company town, home builder and bank president, according to the Monroe County Heritage Museum.)

When you enter Uriah on Alabama 21, there are no instructions on how to pronounce the name. Is it “U-Rye-Ah,” three syllables, like the first name of the “David Copperfield” character, Uriah Heep? No. Locals say “U-Rye,” with the emphasis on the first syllable and a heavy Southern accent that makes the second syllable warble on for a few seconds. Pronounce it wrong at the local filling station and you’re greeted with an odd look.

Tuesday morning, “U-Rye” was bustling with what equates to activity in this place. Logging trucks and 18-wheelers rumbled up and down 21. At J.U. Blacksher High – home of the purple-and-gold Bulldogs – the school’s marching band was running through a hellishly hot July practice for the upcoming football season. The school’s baseball field, which was vacant, looks out over acres of farmland. There is no downtown per se, just a few businesses and homes on 21 along with an impressive war memorial park. It is quintessentially rural Alabama.

Uriah, Jones said, “is as big today as it’s ever been.”

It’s easy to believe him.

Nevertheless, Alabama 21 around Uriah and points north bisects what Jones describes as “some of the prettiest farmland in the country.”

It’s easy to believe him on that, as well.

‘A hundred miles from anywhere’

Frisco City is about as far from Monroeville as Jacksonville is from Anniston, and between them isn’t much: Here, as elsewhere, Alabama 21 can be a barren, lonely place.

Monroeville, population 6,300 or so, is known for its literature – thanks to Harper Lee and Truman Capote – but there is much, much more. When you climb aboard Alabama 21 at its southern terminus and head north, Monroeville is the first place that seems capable of mustering a traffic jam. It’s also the first place big enough to have a Walmart. (Atmore is building one; it’s not open yet.)

Tuesday afternoon, a young woman stuck her head in the gift shop and shouted, “Oh, my gosh! I’m getting a shirt!”, which she did.

Jones, the Monroeville expert emeritus, doesn’t talk much of Lee and her book. Others do that well enough. As for his city and its relationship with Alabama 21, he’s quick to point out that this state road that connects Florida to Piedmont is, in truth, a modern convenience that’s not embedded in the town’s lore.

“Monroeville, really, we’re an isolated town, a hundred miles from anywhere – Mobile, Meridian, Montgomery, Pensacola – in any direction,” he says. “There was no paving (here) until after World War II. When we used to drive to Mobile, we had to go to Atmore on a dirt road.”

“I just really never thought of the importance of 21. But come to think about it, if you’re going to get out of here … of course you think 21.”

The Long Ride: Dispatches from Alabama 21

Ride along with The Star's Phillip Tutor as he travels Alabama 21 from Atmore to Piedmont. Check out his photos, videos and stories from the road at AnnistonStar.com/alabama21. Follow him on Twitter: @ptutor_star and #ala21.