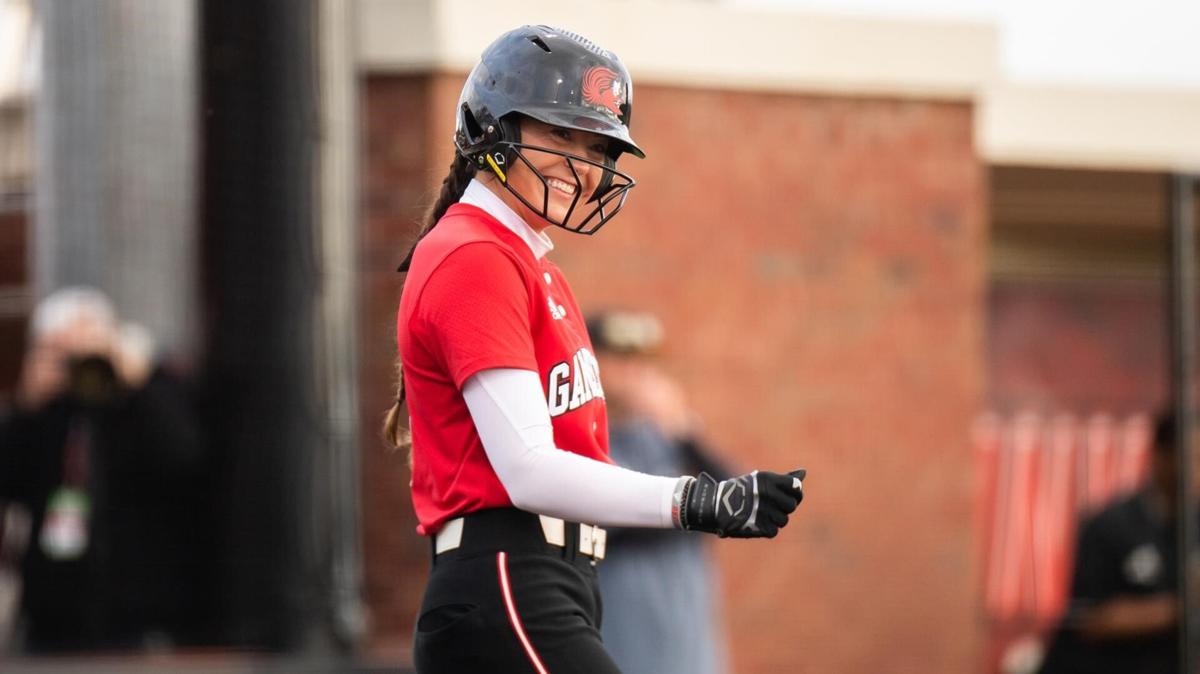 Jada Terry is nearing the end of her Jacksonville State softball career, but nobody can say she hasn't gotten plenty out of it. 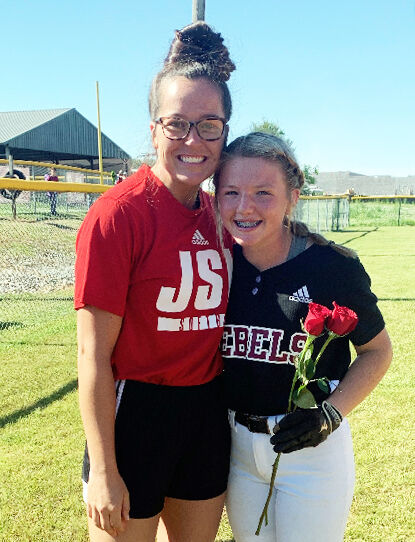 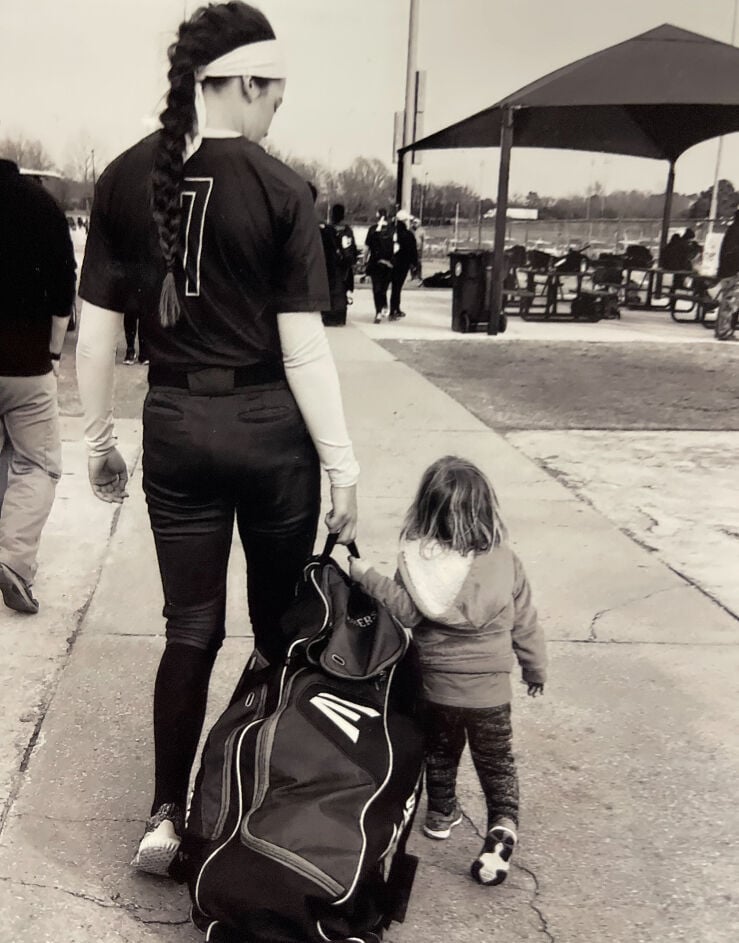 Jacksonville State's Jada Terry as Stella Cope helps her with her bag. 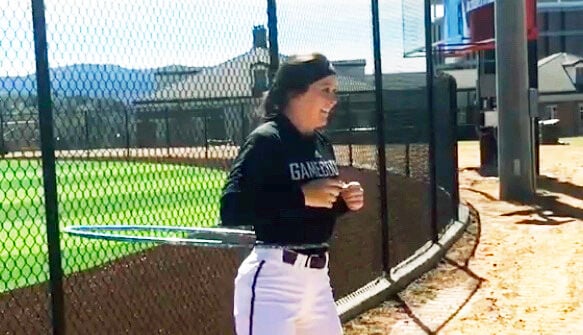 Jada Terry with her good-luck hula hoop in 2019.

JACKSONVILLE — Jacksonville State softball will be just a little less fun next year.

When this season ends, the Gamecocks will lose senior Jada Terry to a budding nursing career. Terry has blossomed into a terrific player who's one of the best hitters in this week's Ohio Valley Conference tournament in Oxford.

She's fifth in the league in hits, sixth in home runs, fifth in doubles, fifth in RBIs and ... well, she's one of the best in a bunch of categories. That pretty much covers it.

But, she's a unique personality, too. Her coach, Jana McGinnis, once said she's someone who sees the fun in things.

When I asked Jada's mother, Missy Terry, if that's a good way to describe Jada, she laughed and answered, "Yes. Oh, yes. Yes."

Jada Terry with her good-luck hula hoop in 2019.

Jada is the one who found an old hula hoop in a JSU softball equipment shed, and immediately turned it into a little good luck charm. Nobody could hula hoop like her, as she would show off her skills during warmups, in the dugout, during practice, and during breaks at the batting cages.

When we ran a piece about her affinity for hooping, her father, Rodney Terry, posted a link to the story on Facebook. A family friend responded, "She's definitely yours."

She's willing to poke a little fun at herself, as well.

Early this season in the seventh inning with her team down by a run and one runner on base, she hit a shot to left field that looked like it was going to sail over the fence for a game-winning home run. Jada tossed her bat down and raised both arms in victory as she turned to the dugout, a huge smile plastered on her face.

Then the ball fell just in front of the fence.

She was the first to laugh afterward at celebrating a little too quickly. It still went for a double to drive in the tying run, and JSU eventually won in 10 innings. In fairness, seriously, everyone thought it was gone.

When JSU is at bat, she always stands up near the front of the dugout, joining fellow senior Alexus Jimmerson in starting the cheers we often hear from softball teams. During one particular tight game, Jada was so vocal, it's a wonder they couldn't hear her down the street at the baseball stadium.

As she tried to coax a little more volume from her throat, her voice was cracking. Still not sure how she didn't pass out.

She's the first to offer kindness and a friendly smile. That's especially true for children, which makes sense because sometimes it's like she's a big kid herself.

There are several softball-playing children near her home in Trinity who wear No. 7 on their jerseys because that's Jada Terry's number.

When I asked Jada's parents about how she has a soft spot for kids, her mom texted a stream of photos of Jada with young admirers.

One was of a now-teenager named Karly Terry. (No relation; it sometimes seems as if half the people in Trinity and over into Lawrence County must have the last name of Terry, and they're never related.) For one of Karly's softball games, Jada drove home from JSU to watch her play. Afterward, she greeted her friend, hugged her, enjoyed a few moments, then got back in the car and returned to campus.

Another child who loves Jada is kindergartner Stella Cope, daughter of a family friend. She has started playing softball and, of course, wears No. 7.

She came to JSU's win over Southeast Missouri on Sunday and spent plenty of time before and after the game with her favorite player. Stella hung out at the batting cages with Jada while the players went through their pre-game work.

Periodically, when all the softballs have been pitched and hit, it's up to the players to enter the cage and gather them off the ground. Jada encouraged Stella to help, and the child took to the job immediately.

Assistant coach Julie Boland offered Stella a high-five for her work. JSU first baseman Megan Fortner playfully wondered if Jada's motive was to let Stella do the work so she wouldn't have to: "Stella needs to give Jada lessons on how to pick up balls."

Jacksonville State's Jada Terry as Stella Cope helps her with her bag.

Actually, the one who might've gotten off easy was third baseman Karsen Mosley. She asked Stella how many balls she had picked up during one of the sessions. Stella said she got seven. Mosley admitted she picked up exactly one ball.

When we posted a short video on social media of Stella and Jada at work, Jada added the description, "My sweet Stella helping us before the game," followed by a heart symbol.

Before another game, Jada took time to throw a football with a different little girl. Jada got so into it, running around and having fun that she slipped and nearly took a tumble in the gravel next to the batting cage. She was fine and got up smiling.

There was the tornado season in 2018 and the coronavirus-shortened season in 2020, but it's more than that. About midway through her freshman year in 2018, she broke her left arm while diving for a ball. She snapped both bones, and the injury was so severe her arm looked kind of like an "S" as she laid on the turf.

A teammate ran over to help, but she was so stunned at the sight of Jada's arm that her eyes went wide and she took in a big intake of breath. McGinnis had to remind her to calm down so she didn't panic Jada.

Jada needed surgery, and she still has two plates in her arm with 15 screws — seven in one bone and eight in the other. She said she still feels stiffness in her wrist on some days, although "I just deal with it."

It's hard not to wonder what her career numbers would look like if she hadn't gotten hurt. But, maybe she gained something more valuable.

Six weeks after the injury, she was back in the lineup, playing left field, and helping win a conference tournament. That's more impressive than being ranked whatever number on whichever statistical list.

Is it any surprise she wants to be a pediatric nurse?

According to her mother, Jada originally entered school wanting to study pharmacology, before finding her way to something that appears particularly well-suited to her skills. Jada knows what it's like to be down, and has a remarkable way with children.

Imagining a scared child needing medical help, I can't think of anybody I'd want on the job more than Jada Terry.