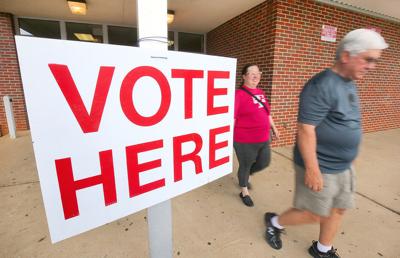 Alabama residents have nearly a month to register to vote in the June 5 primary – but displaced tornado victims don’t necessarily have to rush to re-register before the deadline, state and local officials say.

“Sometimes homeless people vote, too,” said Secretary of State John Merrill. “They have to choose a location as their residence, but they could choose the public library, or The Anniston Star.”

Voting wasn’t the first thing on many residents’ minds on March 19, when an EF-3 tornado tore through Jacksonville, damaging more than 500 houses and shutting down three apartments complexes that, combined, housed about 1,000 people. Since then, many local residents have couch-surfed, gone home to mom or lived in insurance-funded hotel rooms while working out their next step. Some houses have new roofs, or blue roofs, and are once again occupied. Others will never be occupied again.

So far, few are making their change of address official, at least for voting purposes.

“We’ve had only a couple of people who came in to change their place of residence,” said Carol Lorenzo, a member of the Calhoun County Board of Registrars.

Legally, a person may not need a home to vote – but in practice, an address can often matter quite a lot. Candidates sometimes question whether their opponents live in the district they’re running in, a difficult charge to prove. A voter’s address determines their polling place, and Alabama requires voters to produce a photo ID, which typically contains an address.

On June 5, however, poll workers may not care so much whose couch a voter is sleeping on. Lorenzo said there’s no restriction on voting at one’s pre-storm polling place if the voter is still living in the same precinct. And if the address on your driver’s license is still a property you own, there’s little evidence to suggest that you no longer live there.

“If your home is no longer habitable but you’re still registered in that place, that’s where you’re registered,” Lorenzo said.

Merrill said that once someone establishes a permanent residence elsewhere, they need to change their registration.

Still, what “permanent residence” means for Jacksonville residents may be a little hazy right now. Three of the city’s biggest apartment complexes remain uninhabitable, and it’s unclear how many renters intend to return. Merrill said those displaced renters would likely fall into the same category as homeless people.

“Their last place of residence would be where they’re registered,” he said.

If there are questions about where a voter lives, Lorenzo said, that voter will be given a provisional ballot, and state officials can determine later whether the ballot is valid.

The last day to register to vote in the primary election is May 21.