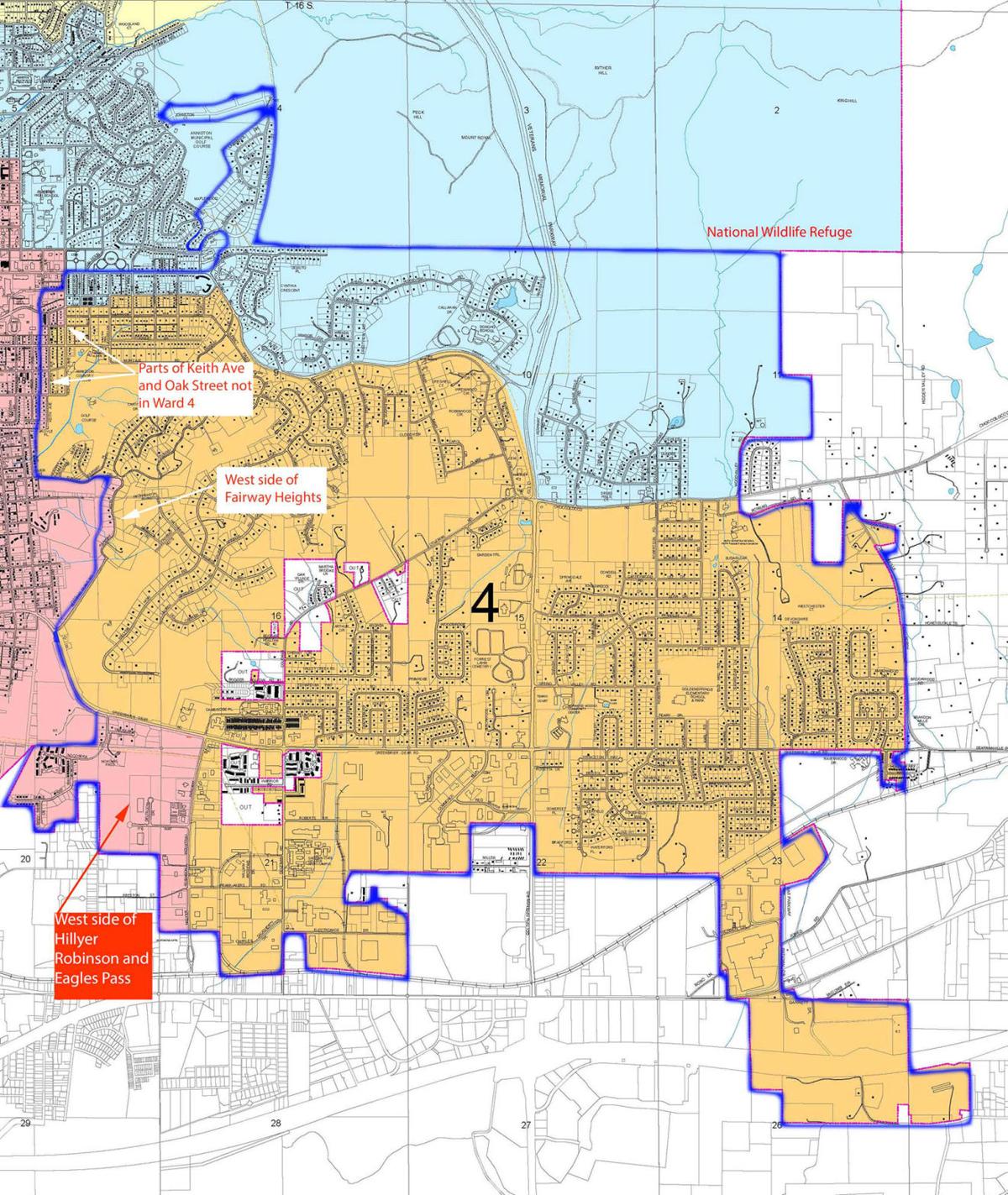 If a proposal by the group Forward 4 All to excise much of Anniston’s east side and transplant it in Oxford were to come to pass, the city’s population would fall by almost half, reducing its city limits along with its revenue. The deannexation plan would come with a reduction in workforce, affecting the pension fund viability of retired police and firefighters, officials say. The area outlined in blue ink on this map of eastern Anniston indicates the region the group would like to see legally detached. The orange section is Ward 4.

If anyone thought there was no longer a threat of Ward 4 deannexing from the city of Anniston, don’t let the recent quietness deceive you.

Conversations and legal maneuverings have clearly continued behind the scenes, as evidenced by a letter last week from state Sen. Del Marsh to city officials seeking to gather information about the city’s pension fund for police and firefighters.

A small group of Ward 4 residents created a nonprofit organization this summer called Forward 4 All. The goal of which is to use the Legislature to deannex Ward 4 from the city of Anniston and subsequently annex it into Oxford simply to increase their property values.

One apparent danger of deannexation is the impact it would have on Anniston’s police and firefighter pension fund. Marsh’s letter asks for “an evaluation of the ... Fund’s current viability,” to let him know “how long before the fund runs out of money,” he wrote in a letter to Mayor Jack Draper. “This information will shed light on the Funds’ current viability and assist me as I continue evaluating the prospect of a de-annexation legislative proposal.”

Marsh has said that part of his evaluation will include public sentiment.

Along those lines, The Anniston Star recently commissioned Jacksonville State University to conduct a survey to gauge the level of support from Ward 4 residents. Those surveys were distributed to the impacted area in Wednesday’s Anniston Star. Anyone who lives in Ward 4 but did not receive a survey is welcome to come to The Star office at 4305 McClellan Blvd. to fill one out. Be prepared to show proof of Ward 4 residency with a driver’s license or power bill.

The Star’s goal is to learn whether this is the desire of only a handful of malcontents or if there’s widespread support for deannexation.

Anniston’s city councilmembers unanimously passed a resolution expressing their opposition to the deannexation, including Ward 4 Councilwoman Millie Harris. They also voted to hire an outside attorney to challenge Forward 4 All, if necessary. Oxford officials have also said they don’t want to absorb the ward.

When The Star initially reported on the Forward 4 All effort, the public response was immediate, widespread and ongoing for days. Some seemed to understand the motivation behind deannexing, but most argued that anyone who doesn’t want to live in Anniston should move, not rip the city in half.

But in recent weeks, the issue has been quiet, leading many to think it had lost steam and was likely dead in the water. That’s clearly not the case, so it’s time for Anniston and those against deannexation to stop waiting to see what’s going to happen, while others actively plot its demise. It’s time to go on the offensive.

Who stands for Anniston?

The county seat is under attack and there’s been barely a peep publicly from those around the county in positions of power. There’s likely a “that’s none of our business” posture being taken by the legislative delegation and the Chamber of Commerce and the County Commission and city councils in the county’s other municipalities. But that’s part of our problem.

In north Alabama, the political and economic successes in Madison and Morgan and Laurence and Limestone counties are clear evidence that regional cooperation among the city and county agencies makes them stronger than any of them functioning individually. The entities in our region generally operate in autonomy, as though one is not impacted by what happens to the other.

But make no mistake, an Anniston in ruins is not good for Jacksonville or Piedmont or Weaver or Calhoun County or even Oxford.

In a telephone interview Tuesday, Marsh said: “I think if any group of citizens comes to me with a concern, I have to look at it and evaluate it.”

What offensive measures has Anniston City Council taken? How many meetings have they sought with Marsh to leverage their political weight on this issue? How often has Marsh’s phone rang with residents on the other end expressing their disdain for this initiative and urging him to disengage? Who’s going to stand and defend Anniston against this blatant and selfish attack by Forward 4 All? What are you waiting for?