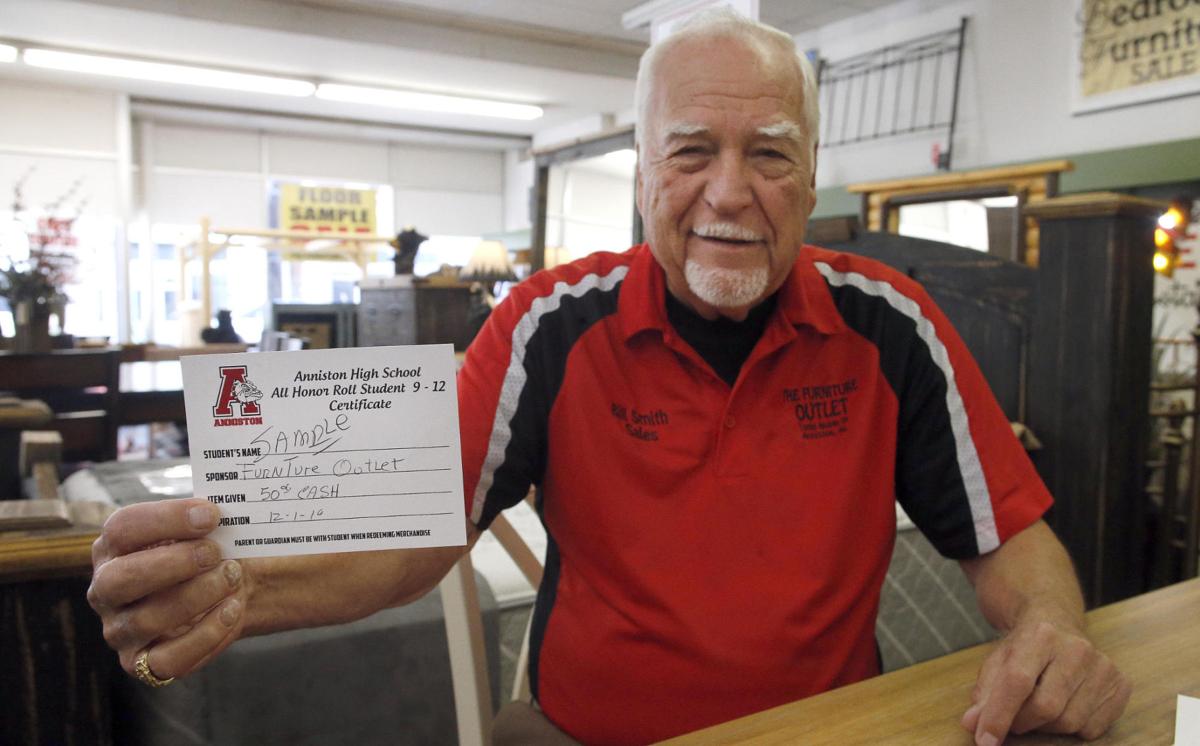 Bill Smith, owner of Furniture Outlet in Anniston, has been raising money and gift cards with local businesses to give to honor roll students at Anniston High School.

An ongoing debate over the continued existence of the city of Anniston has been the topic of conversation in circles throughout the city and even beyond.

On the one hand is a five-person nonprofit called Forward 4 All. Upset over the inability to sell their east Anniston homes for as much as they’d like, they’ve proposed deannexing the city’s mostly white and more affluent Ward 4 area from Anniston and annexing it into the city of Oxford, with the expectation of increasing property values by changing their addresses — without moving. The proposal would leave behind the mostly black and lower income parts of the city.

This would be accomplished not by a vote of the people but through the Legislature by having Sen. Del Marsh introduce a bill to that effect.

(Marsh hasn’t agreed to the plan, but he also hasn’t dismissed it.)

Outlined in a recent op-ed by Forward 4 All spokesman Charles Turner, that proposal has evolved over the months into the idea of deannexing Golden Springs, Saks and McClellan from Anniston and forming a new city to be called the City of McClellan. Or, another suggestion calls for simply dissolving the Anniston school system and absorbing it into the county.

Indeed much of the blame for what ails the city has been placed squarely on the shoulders of the school system. But “the school system” is not an amorphous machine that can be dismantled. It’s more than a nebulous bureaucracy. It’s people — administrators, staff, teachers and, yes, students.

While Forward 4 All has spread the hate/blame, pointing to disjointed and ethically challenged political leadership and financial mismanagement as contributors to Anniston’s woes, the primary target of the group’s consternation has been the schools.

They attempt to assess the school system through standardized tests and state-issued reports and rumors and reputation, but we challenge any of the members of Forward 4 All to tell us when was the last time they spoke with the new superintendent D. Ray Hill, or with Principal Charles Gregory, or visited Anniston High or Anniston Middle to observe the passion and dedication of the teachers and staff? And when was the last time they interacted with the students?

Much like Marsh’s Alabama Accountability Act, which deems the bottom 6 percent of the state’s schools as failures, regardless of how they perform individually, the Forward 4 All approach has found a scapegoat in the school system and doesn’t seem to care about how it impacts the administrators, staff, teachers and, yes, the students in the system.

Fortunately, there’s another side of the story.

Local business owner Bill Smith, owner of Furniture Outlet in Anniston, along with 29 other businesses, individuals and organizations have raised money to reward Anniston students who make the A or A/B honor roll. According to an article by The Star’s Ben Nunnally, Smith distributed $50 (or an equivalent in cash and meals) to 15 students last week, drawn at random from a pool of around 40 honor rollers.

Smith didn’t run from the metrics that point to the school system’s struggles, but instead of using it as an excuse to divide the city, he saw it as a way to bring people together to try and help.

When you talk to the students at Anniston High, you learn that they’re not oblivious to the Forward 4 All efforts and how they’re being characterized by those Annistonians who care more about their property values than the children in the public school system.

Thank goodness for people like Bill Smith, and businesses and organizations like Save Our City, who see an opportunity to change the narrative and make a difference by helping the entire city, not just their corner of it.

Our children need us to lead them to success, not blame them for our failures.