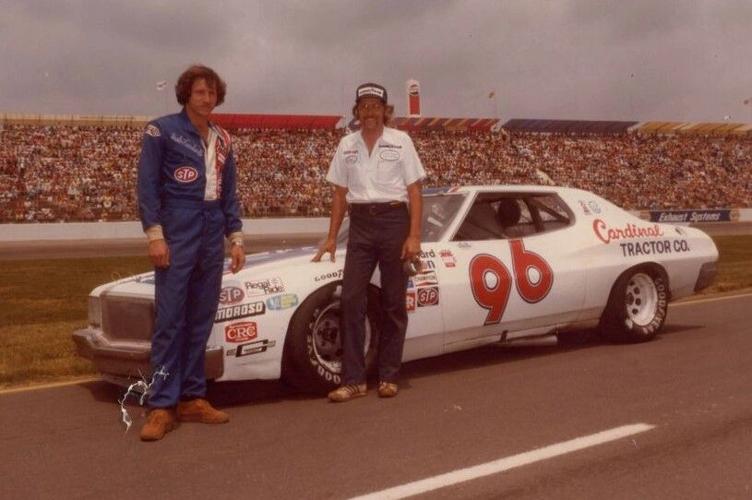 Dale Earnhardt Sr., left, and car owner Will Cronkrite with the No. 96 car that Earnhardt drove at Talladega. 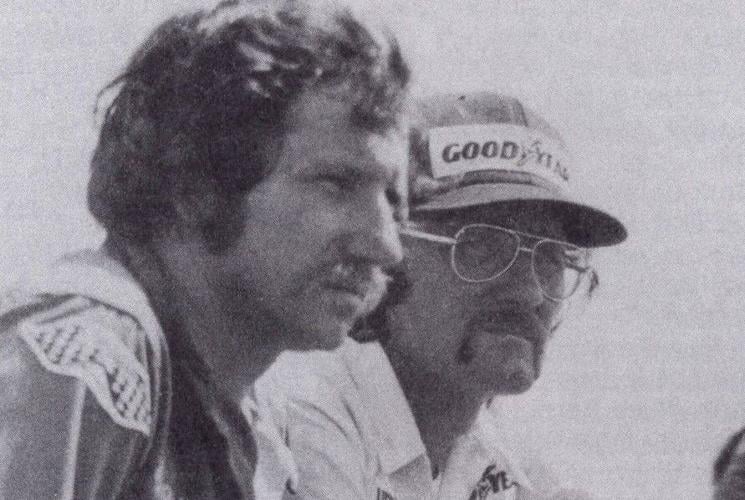 Dale Earnhardt Sr., left, and car owner Will Cronkrite with the No. 96 car that Earnhardt drove at Talladega.

The Dale Earnhardt Talladega Legend was born from a wrong-way trip down a one-way street, a racing promoter who’d put both Barnum and Bailey to shame, a paycheck-to-paycheck car owner, a white Ford with a defensive end’s number and a late-night visit where a — literally — snot-nosed kid snoozed obediently in the passenger seat of a pickup truck.

The Legend, of course, is well-documented. The late Dale Earnhardt Sr. won 10 of his 44 Talladega starts at the Cup level.

He also had one victory in three starts at what is now the Xfinity level and three times in 10 appearances in the now-extinct IROC series.

Earnhardt’s final victory was at Talladega, a much-recounted October 2000 triumph in which he was in 17th with five laps remaining and blew through the field with the drafting help of Kenny Wallace.

But little has been revealed about his Talladega debut Aug. 6, 1978, with a respectable 12th-place finish and a $2,740 share of the purse. Earnhardt received no coverage that weekend outside of being listed in the results on the agate “Scoreboard” pages in America’s newspapers.

The whole saga starts with a driver who had received far too much attention, a man named Willy T. Ribbs, who handled the attention with confidence and, forgivably, some awkwardness.

Ribbs was an African-American driver from California who had enjoyed some modest success as an open-wheel racer and proved brash enough to handle any detractors. Humpy Wheeler, the irrepressible promoter at Charlotte Motor Speedway, arranged a shot in NASCAR for Ribbs, less an altruistic act than something he thought might reach the untapped audience of Black fans.

Ribbs was handed the keys to a Ford Torino that had been built by Bud Moore and then owned by Will Cronkrite, who ran a modest operation out of Fort Mill, S.C. (Cronkrite has since shared much of his lore in a recent book, “I Was a NASCAR REDNECK: Recollections of the Transformation of a Yankee Farmboy to a Southern Redneck in the Golden Era of NASCAR & Beyond.”)

Cronkrite, like Ribbs, had his roots in open-wheel racing before being lured from south by Ron Puryear, a wiry genius of an engine builder who had worked for A.J. Foyt before moving to stock cars. Cronkrite took a job with Benny Parsons, making $100 a week “and working 100 hours a week.”

Alas, Ribbs was a no-show at a test-session, then showed little at another. When Cronkrite urged him to go faster during a Charlotte test, Ribbs parked on pit road 30 yards from Cronkrite and inches from the pit wall, then climbed from the car and stormed away from the track.

The final straw was his arrest by Charlotte police while speeding the wrong way on a one-way street. He hopped from that car, then bolted inside to a nearby building. It turned out to be a gymnasium at an all-girls’ school. Ribbs was an easy catch for the cops.

Wheeler, equal parts embarrassed and angered, called Charlotte sportscaster Harold Johnson to inform him Ribbs had been released from his NASCAR obligations.

Before Johnson could finish his report, Cronkrite’s phone rang.

Dale Earnhardt was on the other end of the line.

He pleaded for a chance to drive Cronkrite’s Torino. He loaded his four-year-old son Dale Jr., nursing a cold, into his pickup and sped to the shop, making the 55-mile drive in 45 minutes.

Earnhardt had only four NASCAR starts to his credit. One was in Atlanta, driving for the late Johnny Ray, the Eastaboga racer and trucking magnate, when he was wrecked and barrel-rolled three times before landing on his wheels. Nonetheless, he was demanding, almost bossy about what he wanted from Cronkrite. They tinkered with the car until the wee hours of the morning, Dale Junior staying in the truck asleep, leaning against the window, his runny nose smearing the glass.

“It had some very amazing history before dad drove it,” he said via email. “Buddy Baker used it to win three in a row at Talladega for Bud Moore.”

The car sported No. 96, with the sponsorship of Cardinal Tractor Company, which paid a $3,500-per-race sponsorship. Earnhardt’s debut in Torino was May 28 at Charlotte, with a 17th-place finish. They went to Daytona for the July 400-miler and finished seventh.

“Things had been going well. Dale hadn’t hurt the car,” Cronkrite recalled in an interview with The Star. So they decided to enter Talladega.

“Both of us,” Cronkrite said, “were just happier than hell to be going racing.”

Cronkrite had invested some recent winnings in a new hauler and Winston offered up a slick paint job for the sides, so “we thought we were pretty hot stuff.”

As the years passed, the chassis of that Torino would undergo more changes after Cronkrite sold it. It wore a larger Thunderbird body in another incarnation, then a Pontiac shell. Ultimately, somebody — Cronkrite isn’t sure who — wrecked it beyond repair. Where the remains rest, no one knows.

Said Cronkrite: “I’d give my bad left knee for it now.”

The week the Torino arrived in that new hauler at Alabama International Motor Speedway (as the track was then known), Pete Rose had his National League-leading hit streak ended in Atlanta by Gene Garber. “Grease” was the hot movie, and customers were assured, “Every time you see it, it gets better.” Golfer Jerry Pate, who spent his childhood in Anniston, was chasing Tom Watson in the PGA Championship. The elegant 19-year-old diver Jenni Chandler from nearby Lincoln won the 3-meter springboard at the AAU Outdoor Diving Championships in Mission Viejo, Calif.

Lennie Pond, whom the motorsports press liked to describe as a “lean and balding Virginian,” had a rare moment in the limelight during the week after a piece of cement from the Talladega garage roof dislodged and almost conked his aqua, orange and white Olds. Though track workers bolstered the roof, Pond chose to keep his car outside. He already felt the sky falling anyway; there was no shortage of rumors that owner Harry Ranier would soon replace him with a rising star named Darrell Waltrip.

Earnhardt didn’t make any news except for the tiny type of the qualifying results — starting 27th, nine spots behind the Oldsmobile sporting the No. 3 and driven by a guy named Richard Childress.

What unfolded was the fastest 500-mile race in history, with an average speed of 174.700 mph. There were a record 67 lead changes and just four cautions for 17 laps.

For poetic justice, the lean, balding Virginian won the race. Said Pond: “I felt like I had to whip the whole world.”

The lean, mustachioed Carolinian who finished 12th that day would go on to win 76 — including 10 in his 44 Cup starts at Talladega.

It was Earnhardt’s only Talladega race for Cronkrite, who loved the speedway, saying, “I just wanted to go where you could go as fast as you could. How fast could you make it go. I lived for those things.”

Cronkrite was especially fascinated by the aerodynamics of the draft, how air currents affected a car’s speed and handling. It was Talladega, of course, where Dale Earnhardt created the legend of being able to “see the air.”

Cronkrite was back at Talladega one day with Earnhardt as Burt Reynolds was filming his movie, “Stroker Ace,” for which Cronkrite provided several cars and technical advice.

“One of the stunt drivers said to him, ‘Can you really see the air?’” Cronkrite recalled. “Dale just got this grin on his face, and he started talking to me. ‘Willie, you know at Darlington, where that stepdown is in the grandstand when you’re going into turn one?’

“He said, ‘I don’t know if I’m seeing the air, but I can tell you when the fat lady in the second row gets up and goes after popcorn.’”