A lawsuit before a federal appeals court may have broad implications for Alabama’s sex offender laws, which some critics claim are the harshest in the United States.

Montgomery resident Michael McGuire is suing the state of Alabama for relief from the residency restrictions, travel limits, sex offender registration and other punishments that accompany a conviction of a sexual offense. The case is before the 11th U.S. Circuit Court of Appeals.

McGuire was convicted of sexual assault in Colorado more than 30 years ago, before many of the modern punishments around sexual crimes were enacted into law, and his argument hinges on constitutional protections against punishments created after a crime is committed.

After serving three years in prison and another on parole, he was released in 1989. He did not find himself in trouble with the law again until 2010, when he moved back to his native Montgomery to be closer to his mother and family.

Upon returning to Alabama, McGuire went to a Montgomery police station to confirm if, as a convicted felon, he was in breach of any state laws. It was at the station he learned he had to register as a sex offender.

He couldn’t live with his wife, mother or brother in Montgomery, because the state required him to stay away from kids, schools and daycares. Soon he was jobless and living under a bridge, with “Criminal Sex Offender” stamped in red letters on his driver’s license.

“He feels like he’s in prison again, a prison without bars,”  said Phil Telfeyan, McGuire’s lawyer. “He is restricted where he can live, where he can take jobs. It’s like being a permanent prisoner.” 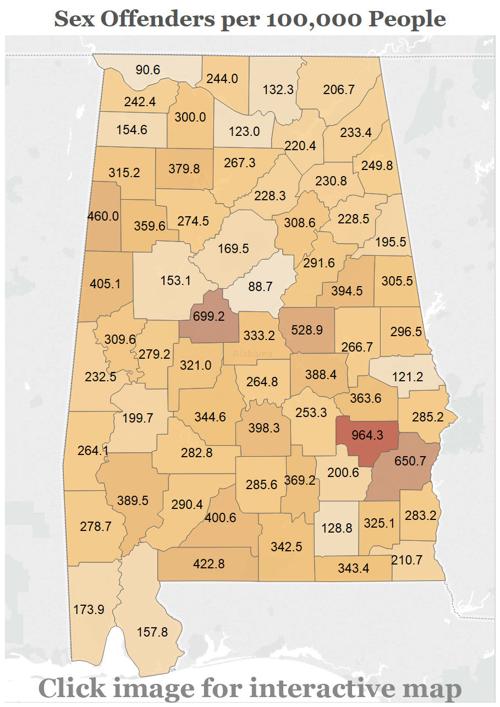 Alabama’s sex offender laws are among the most stringent in the nation. Home to more than 11,000 registered sex offenders, Alabama is among four states that put sex offenders on a mandatory registry for life and the only state that puts the sex offender stamp on a driver’s license.

And while there’s little sign the state’s voters want to ease up on those restrictions, policymakers in other states are beginning to question whether their registries are doing what they’re intended to do: make the public safer.

“Very few people on the registry are going to commit another offense, and it has nothing to do with the public knowing where they are,” Sandy Rozek, communications director for National Association for Rational Sex Offense Laws, an organization that supports making sex offender registries accessible only to law enforcement.

“He feels like he’s in prison again, a prison without bars.” -- Phil Telfeyan, attorney for a man convicted of sexual assault.

Critics of registries say they’re based on a flawed perception of how often sex offenders reoffend and where they come into contact with their victims.

She pointed specifically to a study by Ira Mark Ellman, a professor of psychology and law at Arizona State University, and Tara Ellman, who looked at sex offender recidivism in their 2015 study “Frightening and High.” They found the most common statistic, that up to 80 percent of sex offenders reoffend, is a baseless accusation that has been repeated to the point of being held as fact, even by the U.S. Supreme Court.

“The likelihood of re-offense declines for each year after release without a new sex offense, even for offenders initially considered at the highest risk to re-offend,” the Ellmans wrote in their study.

Horowitz said that 95 percent of children who are sexually abused are hurt by someone they already know, making these lists highly unnecessary.

“I’m not against punishment, but registries are like banishment, it’s beyond punishment. It’s forever.” — Emily Horowitz, professor of sociology and criminal justice at St. Francis College

“They also destroy lives of people who served their time, were sentenced and are trying to get their lives together,”Horowitz said. “I’m not against punishment, but registries are like banishment, it’s beyond punishment. It’s forever.”

Only California, South Carolina and Florida also require permanent registry for every sex offense, and California is moving towards a tiered system that would allow those at a low risk for recidivism to have their names removed from the public registry if they remain offense-free for 10 or 20 years, depending on their crime.

“The state’s sex offender registry has lost significant value over time because it contains so many low-risk offenders with decades-old offenses,” Los Angeles County District Attorney Jackie Lacey said in an emailed statement. “Our bill will improve public safety by creating a tiered system that will allow investigators to focus on those offenders who pose the greatest risk.”

Lawmakers in California may be looking to change their state regulations regarding sex crimes, their counterparts in Alabama are not pushing for similar reforms in most cases. Sen. Cam Ward, R-Alabaster, said that Alabama’s policy makers created the state’s statutes to mirror the federal guidelines, and while they have created a path for people convicted of consensual statutory rape to be removed from the registry, he doesn’t see any support for removing Alabama’s lifetime registration requirement for most sex offenders.

“For every statistic that points one way, you can get a statistic and point the other way,” Ward said. “From what I can tell from people I talk to around Alabama, they are sympathetic to things like expungement on property crimes and they want to reduce recidivism, but for the most part, I haven’t heard anyone saying I wish sex offenders would catch a break.”

“For the most part, I haven’t heard anyone saying I wish sex offenders would catch a break.” — Cam Ward, state senator

Ohatchee resident Krystena Shuler, who in 2009 encountered the man who pleaded guilty to raping her eight years earlier, agreed with Ward and said that the criminal justice system in Alabama is already too lax on sex offenders.

“He admitted his guilt and they slapped him on his hand, and that didn’t do any good,” Shuler said. “I have horrible complex PTSD, and it affects not just me, but my family.”

Shuler also said the current punishments for sex crimes are not deterring all sex offenders, and she fears that sex crimes will increase if the punishments are lowered further.

“I think more than them trying to bring forth things to make it — however they’re saying it — fair or whatever, I think it makes them far more likely to reoffend,” Shuler said. “These people are raping people knowing that they’re going to have to register as a sex offender, and if that doesn’t scare them, they shouldn’t be mad about the punishment.”

Calhoun County Sheriff Matthew Wade said that he believes the sex offender registry to be a valuable resource in protecting victims of sexual assault.

“Most people I know of on the sex offender registration are truly sex offenders, and they need to be on it,” Wade said. “I’m not willing to do away with tracking sex offenders in my community. I want to know where they are to protect the people of Calhoun County as best I can. If I can help to protect just one citizen, I call that a success.”

“If I can help to protect just one citizen, I call that a success.” — Sheriff Matthew Wade

“If we err, we need to err on the side of innocent families and make sure they’re aware of the dangers of a pedophile living close to a school, for instance,” Armistead said. “We should always continue to look to improve that legislation on behalf of the families, but we also need to look at unintended consequences going forward.”

Rep. Randy Wood, R-Saks, agreed with Armistead and said that some sex crimes, like the so-called “Romeo and Juliet” cases of teenaged couples having consensual sex when one partner is old enough to be charged with statutory rape, might warrant some leniency when it comes to lifetime stays on the registry.

“If some young person made a mistake and it was a one-time deal, I think they need to be held accountable for several years and make sure they’re not going to do it again, but I would always keep an open mind and look at the situation,” he said.

However, Wood believes that a permanent listing on the sex offender registry is in Alabama’s best interests when it comes to most sex offenders.

Michael McGuire’s attorney Phil Telfeyan said his client is still homeless, still jobless and still must walk miles to his wife's house for visits, which are limited in duration by residency laws.

Telfeyan doesn’t believe Alabama is moving in the right direction, which is why McGuire is suing the state for retroactive punishment. Article 1 of the U.S. Constitution prohibits both Congress and individual states from changing the punishments of crimes that were committed before the laws were enacted, which McGuire and Telfeyan feel apply to this case.

“Alabama sought to punish folks, and the theory doesn’t work,” Telfeyan said. “The surest way is to get people to turn their life around, get into a stable job and stable housing, and the Legislature has actually made those things harder.”